At the start of the final day of this January’s window, analysis by the Sports Business Group at Deloitte shows Premier League clubs have spent around £80m acquiring new players. This is slightly lower than the £95m seen at the same time last year.

“While the summer window saw a record level of transfer spending, so far we have seen spending in January being slightly more reserved. However, 2014/15 is still a record season for Premier League spending, with clubs having spent over £900m, significantly ahead of the previous record of £760m.”

“This level of spending has been made possible in large part through the broadcast revenue Premier League clubs enjoy. With all 20 Premier League clubs now ranked in the top 40 globally by revenue, we continue to see them use their increased resources to invest in playing talent in the January window.”

The Sports Business Group will release its full analysis of the January 2014 transfer window on Tuesday 3rd February 2015. 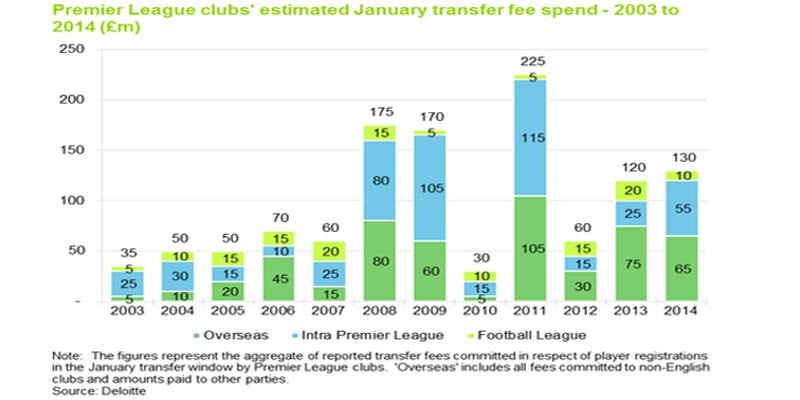 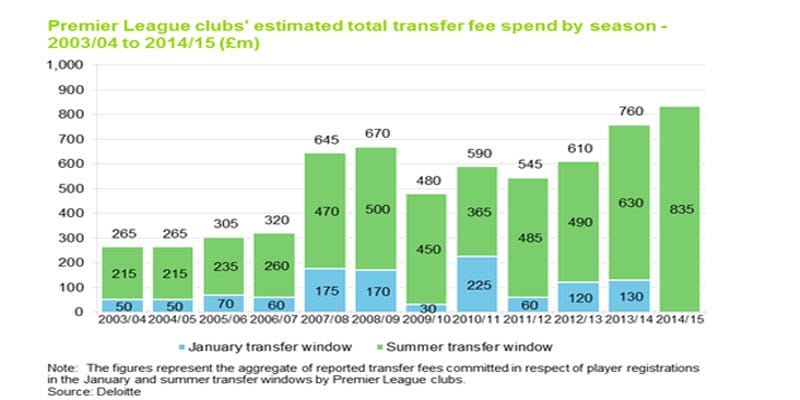 The information on player transfers is based on publicly available information in respect of the acquisition of players’ registrations by clubs, including from www.bbc.co.uk and www.premierleague.com, and further analysis carried out by the Sports Business Group at Deloitte. The information is based on reported transfers as at 08:00 on 02 February 2015, following the close of the January transfer window at 23:00 on 02 February 2015.  Further commentary about the transfer market is included in the Deloitte Annual Review of Football Finance. The figures contained in this release will not necessarily be the same as the cost of acquiring players’ registrations as recognised in the financial statements of each club. Under accounting requirements, the cost of acquiring a player’s registration includes the transfer fee payable (including any probable contingent amounts), plus other direct costs such as transfer fee levy and fees to agents.