Record summer spend for Premier League has been saved

Record summer spend for Premier League has been removed

With one weekend remaining until the close of the 2014 summer transfer window, Deloitte’s analysis shows that gross transfer spending by Premier League clubs has already reached a record level. The current spending total of £725m surpasses last year’s previous record by almost £100m with four days still to go.

Dan Jones, partner in the Sports Business Group, commented: “This summer transfer window is one of records.  It has so far seen a higher level of spending than in any previous window, with a new record gross spend in a single window for a single Premier League club, and has included a record transfer fee for an individual player in English football. Considering that in each of the last two summer windows more than 20% of total Premier League clubs’ spending has occurred on deadline day, there is still potential for a significant increase in that figure.

“There are a number of factors contributing to this summer’s spend, including the showcase for global talent a World Cup provides. However, one of the main drivers of Premier League spending continues to be the increased resources clubs now have as a result of improved broadcast deals. Last season the average Premier League club received around £25m more in central broadcast distributions than they did in 2012/13, which helped fuel a record transfer window last summer. We are again seeing Premier League clubs use these resources to contribute to what is a new record this summer.”

The Sports Business Group will release its analysis of the 2014 summer transfer window on Tuesday 2 September 2014. 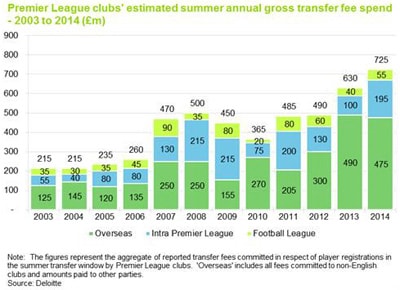 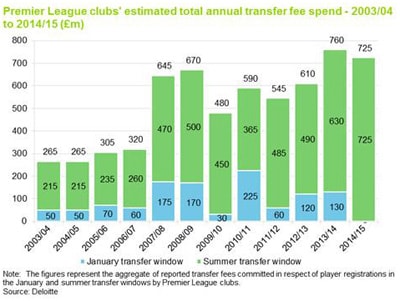 The information on player transfers is based on publicly available information in respect of the acquisition of players’ registrations by clubs, including from www.bbc.co.uk and www.premierleague.com, and further analysis carried out by the Sports Business Group at Deloitte. The information is based on reported transfers as at 10:00 on 29 August 2014. Further commentary about the transfer market is included in the Deloitte Annual Review of Football Finance.  The figures contained in this release will not necessarily be the same as the cost of acquiring players’ registrations as recognised in the financial statements of each club. Under accounting requirements, the cost of acquiring a player’s registration includes the transfer fee payable (including any probable contingent amounts), plus other direct costs such as transfer fee levy and fees to agents.