Premier League clubs’ combined revenues passed £5 billion for the first time in the 2018/19 season, a year-on-year increase of 7%, according to the 29th Annual Review of Football Finance from the Sports Business Group at Deloitte. In revenue terms, the Premier League was 73% larger than its nearest competitor, Spain’s La Liga.

The European football market as a whole generated a record €28.9 billion (£25.5bn) for the year covering the 2018/19 season. Growth was again driven by the ‘big five’ European leagues, which benefitted from receiving the majority of an additional €700m of distributions from UEFA to clubs in their competitions.

Clubs in Spain’s La Liga generated combined revenues of €3.4bn in 2018/19, surpassing the Bundesliga (€3.3bn). However, the earlier return to play of matches in the Bundesliga during the disrupted 2019/20 season will likely see the German league report higher revenues than La Liga in 2019/20. La Liga is expected to return to being Europe’s second highest revenue generating league from 2020/21, due to increased broadcasting revenues. Italy’s Serie A (€2.5bn) and France’s Ligue 1 (€1.9bn) complete the €17bn revenue that was achieved by the ‘big five’ European leagues in 2018/19, a new record.

The Deloitte Sports Business Group’s analysis anticipates that the disruption to the 2019/20 season will reduce Premier League clubs’ revenues in the 2019/20 financial year by approximately £1bn. Of this, almost £500m is permanently lost primarily due to the loss of matchday revenues and rebates on broadcast and commercial contracts from games being delayed and played behind closed doors. The remainder - over £500m – will be deferred until the 2020/21 financial year, due to the delay of almost a quarter of the season beyond 30 June. As a consequence, and despite anticipated potential continued disruption into the 2020/21 season, the 2020/21 financial year may see record-breaking levels of revenue.

Premier League clubs’ revenue growth in 2018/19 enabled additional resources to be spent on playing talent. The Premier League clubs’ overall wages-to-revenue ratio increased to 61%, up from 59% the previous season. Meanwhile, operating profits decreased by 5% in 2018/19 to £824m - still the third highest level ever recorded. However, Premier League clubs recorded a pre-tax loss of £165m in 2018/19 – a near £600m reduction year-on-year – owing to falling player transfer profits and growing amortisation charges.

In addition to the Premier League’s all-time high, Deloitte's analysis found that the 72 Football League clubs in the Championship, League One and League Two generated combined revenues of over £1bn for the first time ever, with each league generating more revenue in 2018/19 than in any previous season. These record revenues did not translate to profitability, with each of the three divisions recording aggregate operating and pre-tax losses, primarily due to excessive wage spending.

The Championship saw a sixth successive season of revenue growth in 2018/19, to £785m, up 5% from the previous season. A record wages/revenue ratio of 107% again demonstrated the collective lack of financial restraint being applied as a large number of the 24 Championship clubs continue to spend in an attempt to secure promotion to the riches of the Premier League.

Tim Bridge, director in the Sports Business Group at Deloitte, commented: “The level of losses in the Championship has been a recurring concern for many years. Even before the financial impact caused by the pandemic, EFL clubs were typically sustained by owner largesse and/or the pursuit of uncertain and uncontrollable promotion or player transfer windfalls. Now is the time for serious action to address the issue of financial stability. Our analysis shows that even a basic 70% salary cap mechanism across the Championship could have a rapid financial corrective impact, all but eliminating losses in a normal season, without damaging the vibrant competitiveness of the league.”

Since the start of the Premier League era, English professional football has not had a problem generating revenue; new records have been set every year since the 1992/93 season. Arguments have been made about distribution of revenue, but both the Championship and Leagues 1 recorded more revenue across their clubs than ever before, with League 2 matching the record level set in 2017/18. The ongoing COVID-19 pandemic could force clubs to reassess their cost control measures and focus on long term financial stability.

Sam Boor, senior manager in the Sports Business Group at Deloitte, added: “While revenue-generation is a new problem for professional football, clubs have had a cost control problem for decades. The demise of Bury and the dangerous predicament many other Football League clubs find themselves in must move the game to introduce meaningful regulatory change and improvement.”

Dan Jones concluded: “The financial growth of English professional club football over the near three decades we have followed it through our Annual Review of Football Finance has been stunning. The improvement and transformation of the sport as a spectacle loved around the world in its stadia and on screens in millions of homes has been remarkable. But structural problems in the game’s finances persist. The decisions taken now will determine if the 2019/20 season is seen in future as the end of a golden age or the start of a better, stronger new era.” 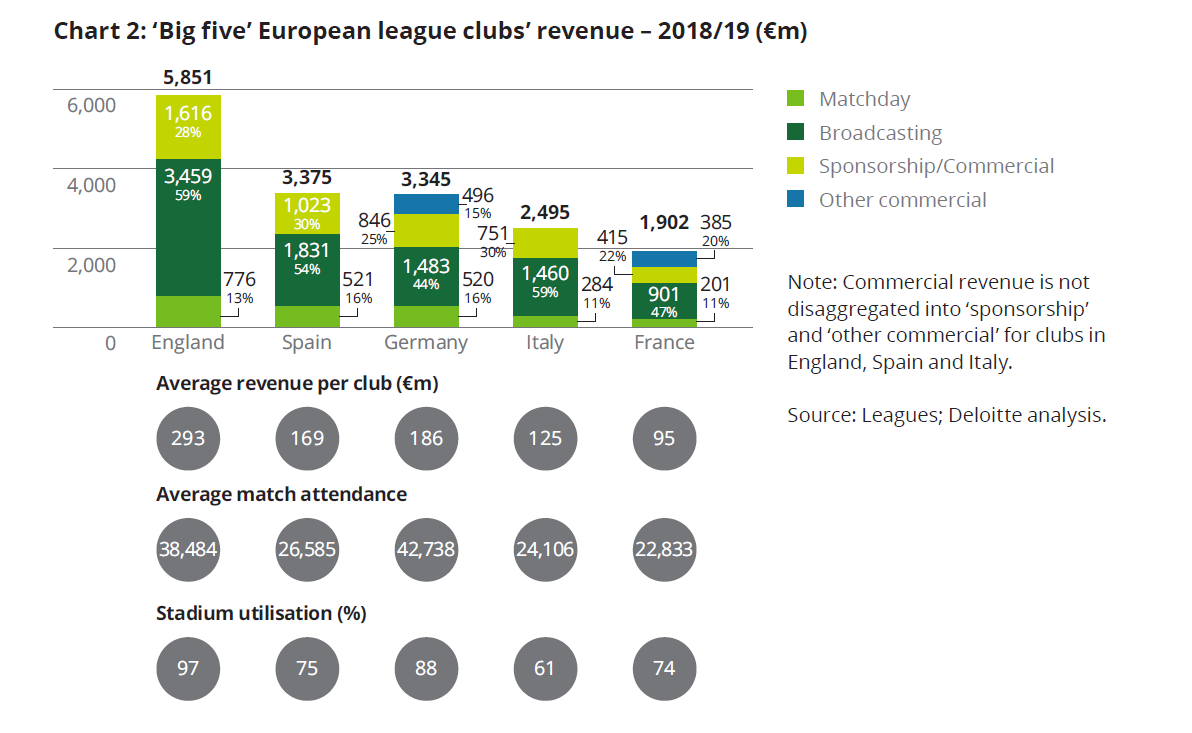 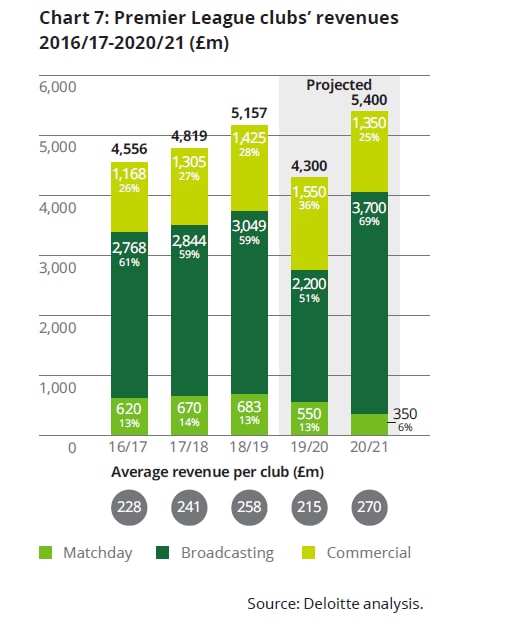 Exchange rate
The average exchange rate for the year ending 30 June 2019 has been used to convert figures between euros and pounds sterling (£1 = €1.13).

About Deloitte
In this press release references to “Deloitte” are references to one or more of Deloitte Touche Tohmatsu Limited (“DTTL”) a UK private company limited by guarantee, and its network of member firms, each of which is a legally separate and independent entity. Please see deloitte.com/about for a detailed description of the legal structure of DTTL and its member firms.

Deloitte LLP is a subsidiary of Deloitte NWE LLP, which is a member firm of DTTL, and is among the UK's leading professional services firms. The information contained in this press release is correct at the time of going to press.