UK consumer confidence fell by one percentage point (to -9%) in the third quarter of the year, returning to a level last seen in the final quarter of 2018, according to the latest Deloitte Consumer Tracker. Whilst consumer confidence continues to be hit by macroeconomic uncertainties, real wages remain high and were reflected in consumer spending power.

The analysis, based on the response of more than 3,000 consumers in the UK between 27 and 30 September 2019, revealed sentiment on job security was three points lower (at -8%) year-on-year. At the same time, confidence around job opportunities and career progression also fell five points to -6% over the same period. This comes at a time when businesses are intensifying cost control, with 70% of CFOs expecting to reduce hiring in the next 12 months, according to Deloitte’s latest CFO Survey.

Ian Stewart, chief economist at Deloitte, commented: “Up to now we have seen a slowdown everywhere but in the jobs market and in the consumer economy. A decline in consumer confidence this quarter, combined with a fall in official unemployment figures, show that the period of remarkable resilience in jobs and earnings is coming to an end.

“With Brexit cited as the biggest risk businesses face, the last quarter has also seen heightened concern over slowing growth in the UK and Eurozone and CFOs are tightening their purse strings in response. The headwinds from a major global slowdown and uncertainty at home point to weaker growth ahead. As a result, 2020 is likely to see not only lower levels of consumer confidence but also a slowing down of consumer spending growth.”

Working hard, playing hard
Consumer spending was most notable in the leisure sector this quarter, with nine out of 11 leisure categories seeing year-on-year uplift, as consumers continue to favour experiences over material goods, such as shoes and clothing. This trend was seen across both small- and big-ticket leisure categories, from gym and sports (up one percentage point, year-on-year) to eating out, in-home leisure, and culture and entertainment (up five percentage points year-on-year, respectively).

Confidence in disposable income was one point higher overall (at -19%) compared to a year ago but the greatest jump was amongst 18- to 34-year-olds, up ten percentage points, boosted by the introduction of April’s National Living Wage.

Simon Oaten, partner for hospitality and leisure at Deloitte, commented: “Spending on short breaks and long holidays has remained flat compared to Q2, despite the seasonality of travel. However, we are seeing uplift across every other leisure category, from regular coffees to attending live sporting events, in a sign that experiences continue to be favoured over goods. Over a third of consumers aged between 18 and 34 are more likely to treat themselves to experiences rather than material goods. Given the same age group has seen the greatest rise in disposable income confidence this quarter, experiential leisure spending could well see further growth.

“However, consumers enter the fourth quarter in a relatively cautious mood and maybe for good reason. Whilst consumers have been quite resilient since the EU referendum, a deterioration in the jobs market could see some spending contraction.” 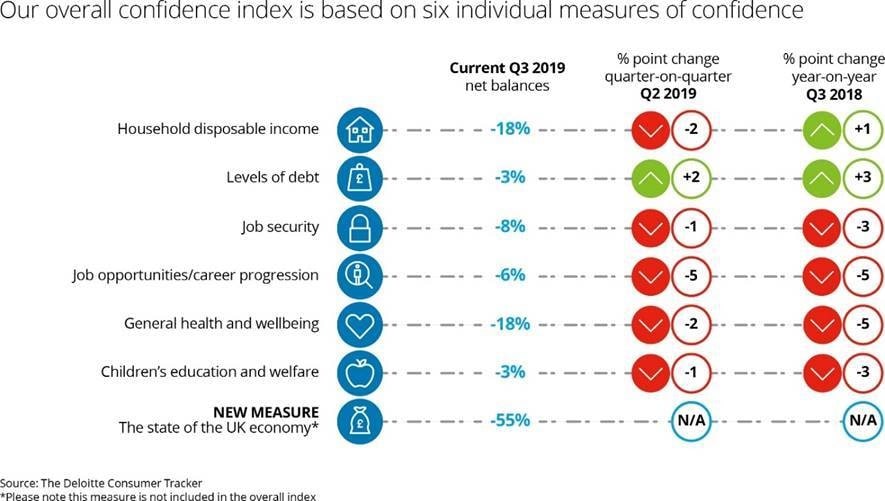 About the research
The Deloitte Consumer Tracker is based on a consumer survey carried out by independent market research agency, YouGov, on Deloitte’s behalf. This survey was conducted online with a nationally representative sample of more than 3,000 consumers in the UK aged 18+ between 27 and 30 September 2019. Overall consumer confidence is calculated as an aggregate of seven individual measures: job security, job opportunities, household disposable income, level of debt, children’s education and welfare, general health and wellbeing, and the state of the UK economy.