Consumer confidence fell by one percentage point for a second consecutive quarter in Q4 2021, reaching -11%, as consumers started to feel the squeeze of inflation and pockets were hit with higher household bills. Personal expenditure in the final quarter of 2021 increased for two in five (41%) consumers, up from one in three (36%) in Q3, according to the latest Deloitte Consumer Tracker. Of these, three-quarters (74%) revealed it was due to rising prices.

Céline Fenech, consumer insights lead at Deloitte, commented: “With the expected squeeze on spending power and higher inflation, another fall in confidence may dent the hopes of a consumer recovery. However, some consumers are still in the fortunate position of having higher levels of savings compared to before the pandemic, indicating some financial resilience.

“The further easing of restrictions should also support an improvement in sentiment, in turn boosting spending. However, this may not occur until inflation has peaked so the critical question in the meantime is whether consumers can afford to continue spending.”

The Deloitte Consumer Tracker is based on responses from 3,177 UK consumers between 31st December 2021 and 5th January 2022, against the backdrop of rising Omicron variant cases and with consumers living under ‘Plan B’ COVID-19 restrictions.

Of the Consumer Tracker’s seven measures of confidence, sentiment around the state of the economy recorded the largest quarter-on-quarter decline, falling eight percentage points. This fall marks the lowest reading since Q1 2021, when the UK was under strict lockdown measures. However, the dramatic fall in sentiment amongst consumers is in stark contrast to business executives who intend to make increased capital investment a strong priority for the year ahead.

Sentiment measures around job security, and career opportunities and progression are both up on Q3 by two and one percentage points, respectively. Whilst businesses have faced significant recruitment difficulties over the last three months, a sustained ‘candidates’ market’ means many consumers remain optimistic about their own job prospects.

Stewart continued: “A strong recovery in activity as lockdown restrictions eased has ensured most furloughed workers have been able to return to the workforce. At the same time, the ratio of unemployed people to vacancies sits at a record low meaning, theoretically at least, there is a job available for almost every person out of work.”

Half-term breaks release some pent-up demand, but consumers delay booking too far ahead

With essential spending set to take precedence over discretionary spending in the quarter ahead, consumers are signalling that holidays and socialising could be delayed, despite pent-up demand.

Simon Oaten, partner for hospitality and leisure at Deloitte, said: “The extent to which consumer finances come under pressure in the months ahead will determine the speed of recovery. The hospitality and leisure sector has been one of the hardest-hit throughout the pandemic, with the normally busy festive period punctured by cancellations over Omicron fears.

“With consumers eager to see a return to restaurants and holidays, the hospitality and leisure sector will welcome the recent lifting of most restrictions, which have already unlocked some of the pent-up demand for services and growth in half-term bookings. Flexible offerings will play an important part in helping to regain the trust and confidence of consumers for further bookings in 2022.” 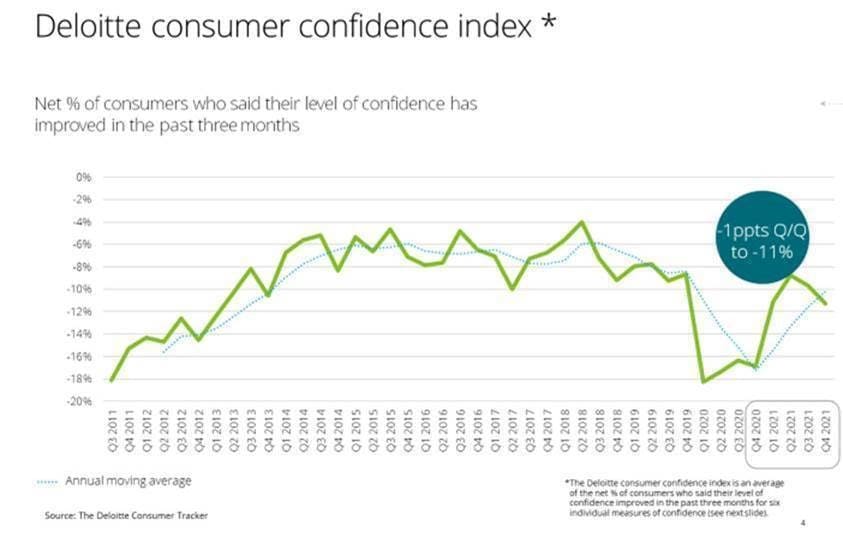 The Deloitte Consumer Tracker is based on a consumer survey carried out by independent market research agency, YouGov, on Deloitte’s behalf. This survey was conducted online with a nationally representative sample of 3,177 consumers in the UK aged 18+ between 31st December 2021 and 5th January 2022. Overall consumer confidence is calculated as an aggregate of six individual measures: job security, job opportunities, household disposable income, level of debt, children’s education and welfare, general health and wellbeing. Since Q3 2019, respondents have been asked their view on the state of the UK economy.