Having started the New Year with renewed optimism, consumer confidence reached a record low by the end of the first quarter of 2020 as the impact of COVID-19 unfolded, according to the latest Deloitte Consumer Tracker. Measuring quarterly changes in confidence across six measures including job security, household disposable income, debt, education and welfare and general health and wellbeing, the latest Consumer Tracker has recorded its lowest level of consumer confidence since it began in Q3 2011.

Deloitte’s analysis is based on responses of more than 3,000 UK consumers between 20th and 24th March 2020, as the UK’s lockdown measures came into force. The latest findings also revealed that consumer sentiment on the state of the economy fell 43 percentage points, quarter-on-quarter, with consumers anticipating a worsening of the economic situation over the next three months, before any notable improvement.

Consumer sentiment dropped across every measure of the survey, with general health and levels of disposable income most negative, at -28 and -27 respectively. The UK’s lowest earning households recording the lower levels of confidence.

Of all the categories measured, confidence in ‘job security’ saw the biggest quarterly decline, falling by 15 percentage points to -20, indicating that UK consumers are increasingly worried about the impact the pandemic will have on the economy and their jobs.

Ian Stewart, chief economist at Deloitte, commented: “The shock to the economy that we have seen in a matter of weeks is causing jobs losses on a greater scale than in the financial crisis. The government is leaning against the downturn with unprecedented support for jobs, incomes and businesses. Despite this, worries about job security and the state of the economy have generated a sharp downturn in consumer confidence. With the peak of the virus outbreak not yet reached, consumers enter the second quarter of the year expecting things to get worse before they get better.”

Impact of virus hits consumer pocket
When specifically asked about the impact of COVID-19, over a third (35%) of consumers revealed they had lost money due to the cancellation of planned holidays and events.

At the same time, 77% of consumers expressed worry about their health or that of a loved one.

Asked about the changes regarding consumer behaviour, at the time of being surveyed 58% of respondents were already heeding self-isolation and social distancing advice, and one in five had volunteered their time to help local community initiatives in tackling the virus.

Ben Perkins, head of consumer research, commented: “Understandably, consumer confidence has been hit hard by the COVID-19 pandemic and social distancing measures implemented to combat it.

“Consumer optimism over personal finances at the very start of the year has shifted significantly, reflected in lower confidence over job security and levels of disposable incomes this quarter. As expected, consumers are now prioritising essential purchases, increasing the amount they spend on food and groceries, particularly online.” 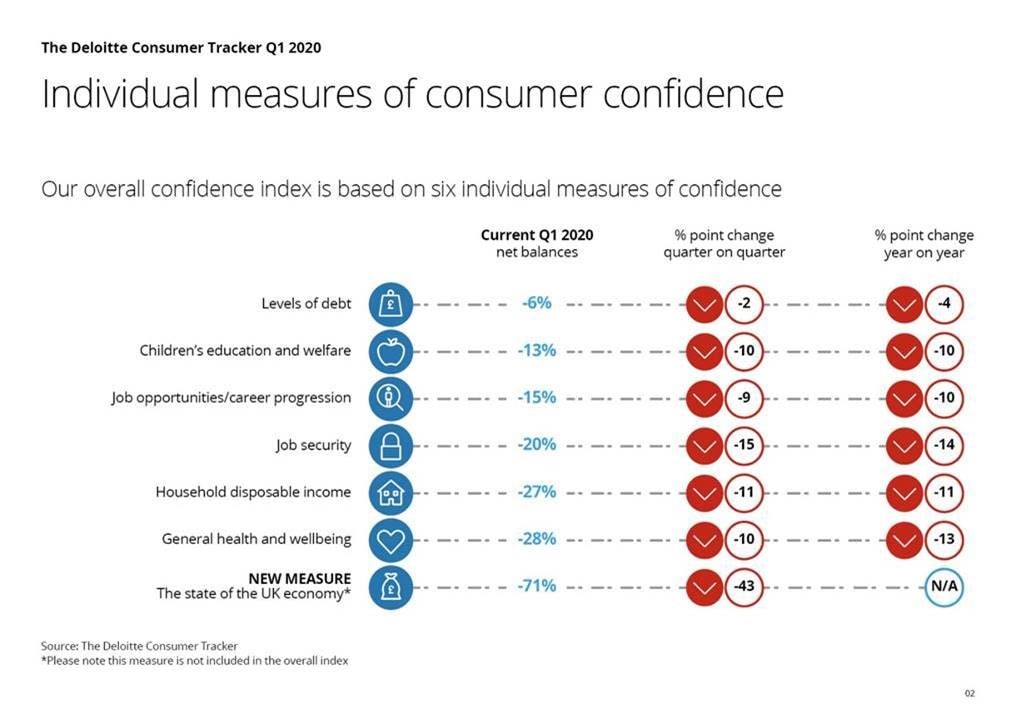 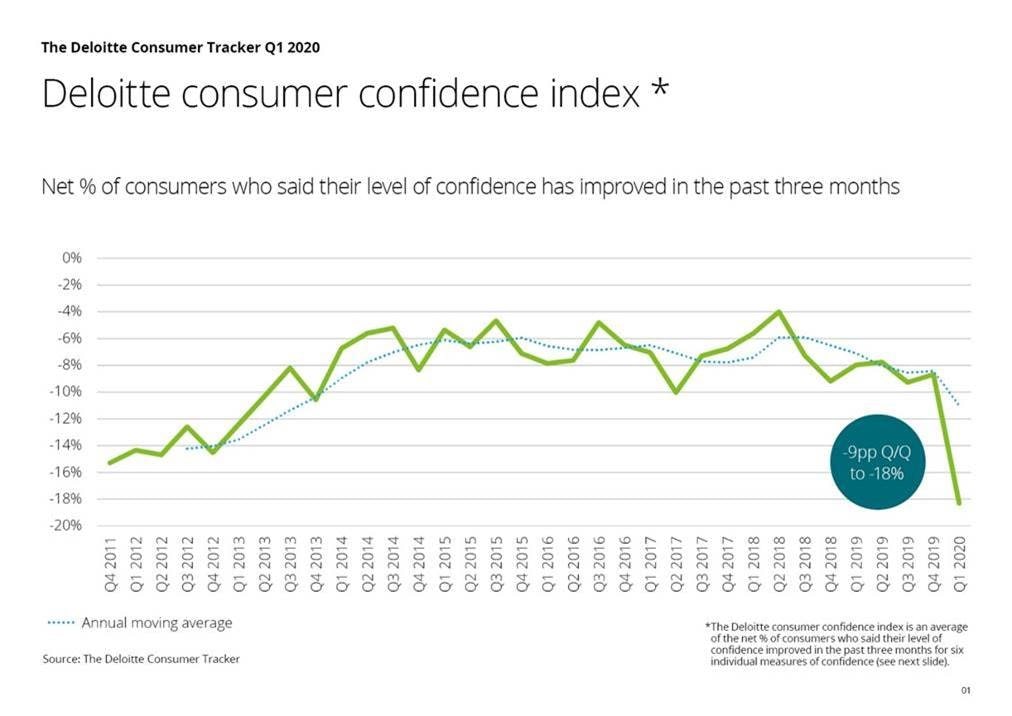 About the research
The Deloitte Consumer Tracker is based on a consumer survey carried out by independent market research agency, YouGov, on Deloitte’s behalf. This survey was conducted online with a nationally representative sample of more than 3,000 consumers in the UK aged 18+ between 20th and 24th March 2020. Overall consumer confidence is calculated as an aggregate of six individual measures: job security, job opportunities, household disposable income, level of debt, children’s education and welfare, general health and wellbeing. Respondents have been asked their view on the state of the UK economy from Q3 2019.