European football market worth €28.4 billion (£25.1bn) as Premier League clubs lead the way to record revenues has been saved

European football market worth €28.4 billion (£25.1bn) as Premier League clubs lead the way to record revenues has been removed

Winning streak: European football sees record financial growth
The European football market is now worth a record €28.4 billion (£25.1bn), according to the 28th Annual Review of Football Finance from the Sports Business Group at Deloitte. The growth was driven by the ‘big five’ European leagues which increased their combined revenues by 6% in 2017/18, as well as the FIFA World Cup in Russia. The commencement of the German Bundesliga’s new broadcast arrangements saw them leapfrog La Liga to become the second largest revenue generating league in the world.

Dan Jones, partner and head of the Sports Business Group at Deloitte, explained: “European club football is in the strongest financial position that we've ever seen. This reflects the drive among leading clubs to generate ever greater revenues to fund success on the pitch and also the sustained efforts of UEFA to improve profitability and sustainability of clubs through Financial Fair Play and club licensing. While the Premier League retains its leading position financially, we expect to see other leagues continue to grow in the coming years.”

Premier League clubs: in a league of their own
The 92 Premier League and Football League clubs generated a record £5.8 billion in revenue in 2017/18. With five English teams competing in the UEFA Champions League in 2017/2018, all reaching the Round of 16 or beyond, UEFA Champions League distributions to clubs increased substantially by c.£71m. Alongside the increase in UEFA distributions, matchday and commercial revenue both grew by 8% and 12% respectively.

As the financial consequences of record-breaking transfer activity in 2016/17 filtered through, increased spending by Premier League clubs resulted in the wages/revenue ratio rising to 59% in 2017/2018. Nonetheless, this ratio is the fourth lowest since 1998/99. The increased wage spend has contributed to reduced operating profits from 2016/17’s record levels, falling 16% to £867m, still the second highest level of profitability ever.

Jones added: ”We have seen Premier League clubs’ wage expenditure increase at a faster rate than revenue growth in 2017/18. This is the same pattern as observed in the second year of the previous Premier League broadcast rights cycles, as clubs continue to invest in playing talent. This wage spending is an indication of the competitive nature of the division, with the top clubs competing for financially lucrative places in UEFA competitions, and clubs lower down the division fighting to remain in the Premier League itself.

“With the sale of the Premier League’s domestic and international broadcast rights now complete for the 2019/20-2021/22 seasons, resulting in an overall 8% revenue increase, Premier League clubs will receive further increases in central distributions in the coming seasons. However, the increase is not as significant as in the previous two cycles and therefore clubs will aim to improve their competitive and financial position through developing and growing other commercial revenue.”

2017/18 saw a fifth successive season of revenue growth in the Championship with revenue increasing by 4% to £749m. However, this was coupled with a wages/revenue increase from 99% to 106%, highlighting the financial risks Championship clubs are willing to take in order to chase promotion to the Premier League.

On a more positive note, net debt among Championship clubs almost halved over the course of the 2017/2018 season to £963m following a number of significant debt to equity conversions, and because of the impact of clubs promoted to and relegated from the Championship. 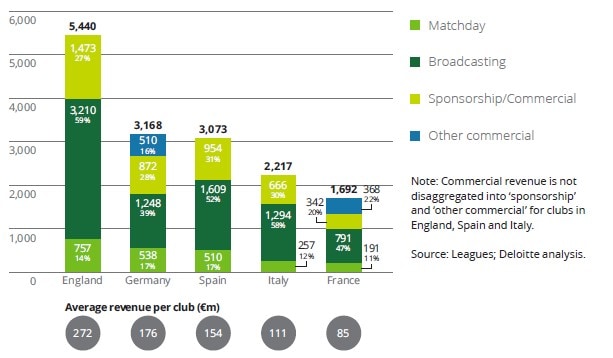 Exchange rate
The average exchange rate for the year ending 30 June 2018 has been used to convert figures between euros and pounds sterling (£1 = €1.13).