Amid the uncertain market created by the COVID-19 pandemic the January 2021 transfer window saw significantly reduced activity across Europe as clubs exercised caution, according to analysis by Deloitte’s Sports Business Group. Premier League clubs completed a total of just 24 transfers during the January 2021 window, a reduction of 48% compared to the most recent three-year January transfer window average (46).

In addition to a year-on-year fall in volumes, Premier League clubs spent a total of just £70m during the January 2021 transfer window. This represents a decrease of gross transfer expenditure of £160m compared to January 2020 and marks the lowest window of spending since 2012.

Dan Jones, partner at the Sports Business Group at Deloitte, commented: “Premier League clubs were understandably cautious in the January transfer window given the ongoing financial impact of the COVID-19 pandemic. Despite this, Premier League clubs’ very busy summer window, at a time when the rest of European football was more restrained, saw total net expenditure for the 2020/21 season reach a new record level of £950m. It remains to be seen if the relatively low activity in January will continue throughout 2021. We certainly do not expect to see another new record this summer.”

Jones added: “During the January 2021 window, Premier League clubs’ expenditure on players from non-English clubs fell to just £45m. In the previous two January transfer windows, Premier League clubs’ spend on this category of expenditure averaged £165m. While new post-Brexit rules on acquiring players from overseas may have contributed to this, the financial impact of the pandemic was, by far, a more important factor.”

The ‘big six’ Premier League clubs have not invested heavily in their squads this window, investing in three permanent transfers and three loan fee transfers, accounting for 35% of the total spend. In the January 2020 window they accounted for over half of all expenditure by Premier League clubs (c.£120m).

Furthermore, the current bottom four clubs in the table only spent £6m to acquire seven new players during this window. Comparably the clubs in the same position last season completed a total of eight inbound transfers for a value of £40m, as they sought to avoid relegation.

According to the 2021 edition of the Deloitte Football Money League, the top 20 revenue generating clubs will miss out on over €2 billion of revenue across the 2019/20 and 2020/21 seasons, with the impact to the overall European football market likely considerably higher. This lost revenue may potentially act as the catalyst in creating a shift in how clubs approach the transfer market over the next few seasons.

Key findings from Deloitte’s analysis of the January 2021 transfer window include: 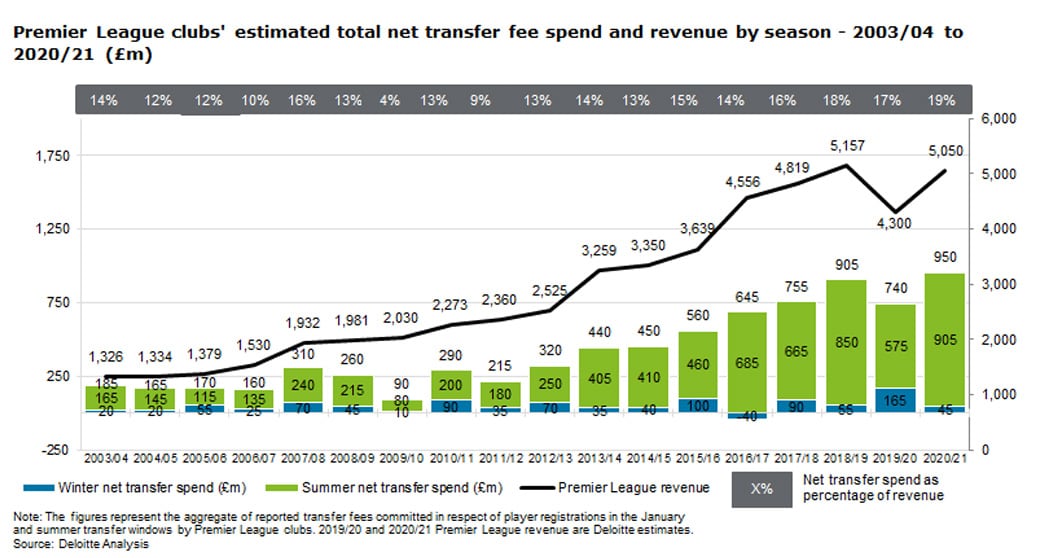 Basis of preparation
Deloitte has collated and analysed clubs' player transfer fees for each transfer window since January 2003. The information on player transfers is based on publicly available information in respect of player registration acquisitions by clubs, including rom www.bbc.co.uk and www.premierleague.com, and further analysis carried out by the Sports Business Group at Deloitte. The information is based on reported transfers as at 02:00 GMT on 2 February 2021. Further commentary about the transfer market is included in the Deloitte Annual Review of Football Finance. The figures contained in this release will not necessarily be the same as the cost of acquiring players’ registrations as recognised in the financial statements of each club. Under accounting requirements, the cost of acquiring a player’s registration includes the transfer fee payable (including any probable contingent amounts), plus other direct costs such as transfer fee levy and fees to agents. The exchange rate at 1 February 2021 has been used to convert figures between euros and pound sterling (£1=€1.13).

About the Sports Business Group at Deloitte
Over the last 30 years Deloitte has developed a unique focus on the business of sport. Our specialist Sports Business Group offers a multi-disciplined expert service with dedicated people and skills capable of adding significant value to the business of sport. Whether it is benchmarking or strategic business reviews, operational turnarounds, revenue enhancement strategies or stadium / venue development plans, business planning, market and demand analysis, acquisitions, due diligence, expert witness, audits or tax planning; we have worked with more clubs, leagues, governing bodies, stadia developers, event organisers, commercial partners, financiers and investors than any other adviser.