Deloitte’s research, analysing the smartphone usage habits of 4,150 people between the ages of 16 and 75 in the UK, forecasts that the mobile gaming market will surpass £1 billion in 2019.

Overall, 53% of smartphone owners, the equivalent to 21 million UK adults aged between 18 and 75, report that they play games on their device. The majority do so around the clock, with 17% playing as soon as they wake up, 22% at bedtime and 25% during their commute.

Paul Lee, global head of technology, media and telecoms research at Deloitte, said: “It’s impossible to sit on a train or bus, or indeed in your living room, and fail to be in the company of people avidly playing games on mobile phones. We’re a nation hooked to our smartphones, and ever since Snake, mobile gaming has been one of the key pastimes for the population.

“As mobile gaming this year breaks the billion-pound mark, new gaming subscription packages and franchises are lining up to launch into the market. This will undoubtedly mean that mobile gaming will reach the next level in 2020, bringing fresh opportunities for advertisers and app developers.”

Lee added: “The vitality of the mobile games market is down to its variety: there is a genre for everyone, regardless of gender, age or culture. This is a key part of mobile games’ commercial success. Use of games consoles is, by contrast, fair narrower, with young men far more likely to be the key players.”

Generation game: older age groups unlock growth in gaming
Older age are groups are among the most fervent players of mobile games. Almost half (47%) of those aged between 45 and 54, and 29% aged between 55 and 75 play games on their phones.

Mobile gamers aged 55-75 who pay for games on their device are the most likely age group to spend money to remove time limitations to continue playing. One in four (26%) have done so in the past, compared to an average of 17% among all gamers.

Overall, more than two-thirds (68%) of those who play games on their phone think they use their phone too much, compared to a national average of 37%. 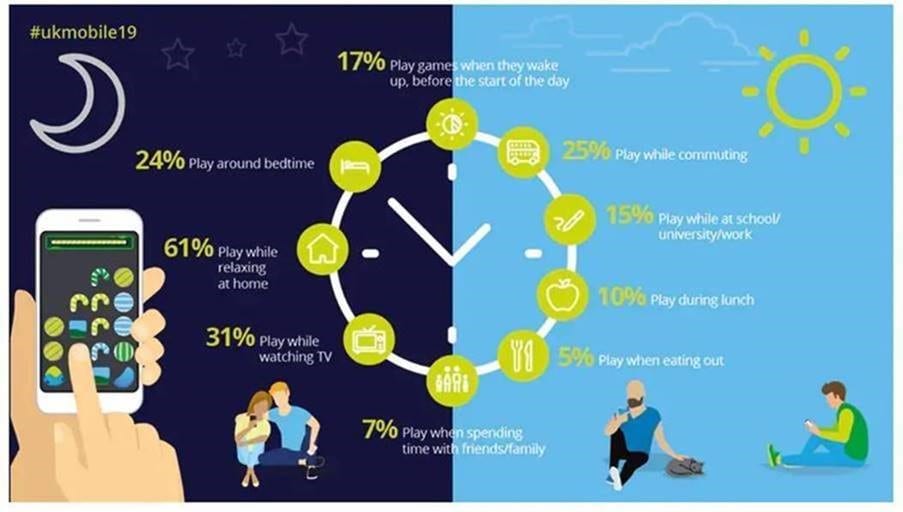 About the research
This research is based on the UK cut of Deloitte’s Global Mobile Consumer Survey, a multi-country study of mobile phone users around the world. The 2019 study comprises approximately 44,150 respondents across 28 countries and six continents.

Data cited in this report are based on a nationally representative sample of 4,150 UK consumers aged 16-75. The sample follows a country specific quota on age, gender, region and socio-economic status. Fieldwork took place during early Summer 2019 and was carried out online by Ipsos MORI, an independent research firm, based on a question set provided by Deloitte.