The final quarter of 2020 saw consumer confidence fall by a further percentage point, to -17%, as the UK headed into the New Year under fresh lockdown restrictions, according to the latest Deloitte Consumer Tracker. With the exception of personal finances, all other measures of confidence were below year-on-year comparisons, with ‘health and wellbeing’, and ‘children’s education and welfare’ categories reaching historic lows.

Deloitte’s analysis is based on responses from more than 3,000 UK consumers between 1st and 4th January 2021, after a Brexit deal had been reached, and as a third national lockdown was announced.

The emergence of a more virulent strain of COVID-19 saw confidence around health and wellbeing fall six percent points in Q4 2020, the lowest level ever recorded at -34%. Coupled with questions over the reopening of schools after the Christmas holidays, confidence in children’s education and welfare also reached a record low, falling four percentage points to -17%.

However, the extension of some major government and private sector income-support measures, such as the furlough scheme and payment holidays on loans, mortgages and credit cards, boosted confidence in personal finances, improving sentiment in the fourth quarter. With many consumers working from home, free of commuting costs and unable to spend on holidays or socialising, 31% of respondents said their savings had increased in 2020 with Millennials leading the way (35%). By contrast, 29% of consumers said their savings had decreased over the same period, with 30% of Gen-X and 30% of Baby Boomers each falling into this category.

Whilst overall sentiment on levels of household disposable income was flat in Q4 2020, at -17%, it remains a percentage point higher than the same time last year, prior to the COVID-19 outbreak.

Ian Stewart, chief economist at Deloitte, commented: “High levels of savings combined with confidence in household disposable income point to favourable conditions for supporting growth in consumer activity when the recovery comes. The easing of lockdown restrictions, coupled with vaccines being more widely rolled out and strong personal finances, should unleash pent-up demand to spend.”

State of the Economy

Consumer confidence on the state of the economy was buoyed in the final quarter of the year by news of an agreed Brexit deal, as sentiment jumped nine percentage points from the previous quarter. However, the economic impact of ongoing COVID-19 restrictions has seen economic sentiment remain extremely negative, at -73%.

Nevertheless, there are signs that financial support packages and the extension of furlough to the end of April have likely limited further unemployment, as job security sentiment remained flat from Q3, at -15%, and job opportunity and career sentiment rose by one percentage point, to -19%.

Stewart continued: “The deepest global downturn since the 1930s will leave a ‘hangover’ but, whilst other recessions have often resulted in the loss of skills and capacity, this time is different in many respects. Government initiatives, for instance, have significantly limited the damage to jobs and businesses. However, the outlook for growth in 2021 hinges on the continued battle between COVID-19 containment on the one side, and vaccination on the other.”

According to the research, discretionary spending increased by one percentage point in Q4, to -25%. Whilst remaining low, this was boosted primarily by the purchase of alcohol and tobacco, electronic equipment, clothing and footwear, and major household equipment.

With some consumers able to save more as a result of fewer spending opportunities, and disposable household incomes slightly improved on Q3, this could indicate recovery of the high street when non-essential retail reopens once more. However, CFOs have indicated that homeworking could rise five-fold by 2025. Combined with greater consumer interest in buying locally, the question for retailers is which behaviours will shift permanently after lockdown.

Ben Perkins, head of consumer research at Deloitte, commented: “As a result of the pandemic, many consumers shopped online for the first time and the experience has opened eyes to the convenience and choice digital technology can offer. Retailers should now be asking how they can retain these new customers.

“That being said, for many shoppers buying online will never fully replace the experience of visiting a store and the pandemic has exposed some truths that the high street of the future will need to acknowledge and respond to longer-term behavioural change. For now, after a year of disruption, many of these shifts in consumer behaviour will be engrained and it should not be assumed that consumers will simply revert to their pre-COVID-19 shopping habits.”

November’s lockdown and tighter restrictions over the Christmas period negatively impacted on spending across almost every leisure category in the final quarter of 2020. With few options available, consumers turned to in-house leisure, such as on-demand TV and at-home exercise classes, which saw a ten percentage point jump on the previous year. However, with social distancing restrictions in place, restaurants, pubs and cafés were, by contrast, hardest hit with year-on-year spend on eating and drinking out declining by -51 and -40 percentage points, respectively.

Simon Oaten, partner for hospitality and leisure at Deloitte, said: “In what should have been one of the busiest times of the year for the leisure, travel and hospitality sectors, most businesses had to endure tighter restrictions as a result of a new virus variant, forcing the vast majority of businesses to remain closed.”

Whilst consumers remain cautiously optimistic about the prospect of summer holidays, recent tightening of travel and quarantine requirements are likely to impact spending intentions on travel over the next three months.

Oaten concluded: “With new variants of the virus emerging in different locations, uneven vaccine rollout between countries, and more authorities looking at pre- and post-travel testing and quarantine arrangements, international travel continues to be increasingly challenging. The first quarter of the year is usually an important booking period for the travel sector. However, the continued uncertainty has delayed consumer travel plans until later in the year and, for some, even into next year. There is optimism in parts of the sector that the ‘staycation’ could continue to be a popular holiday option with UK consumers again this year.” 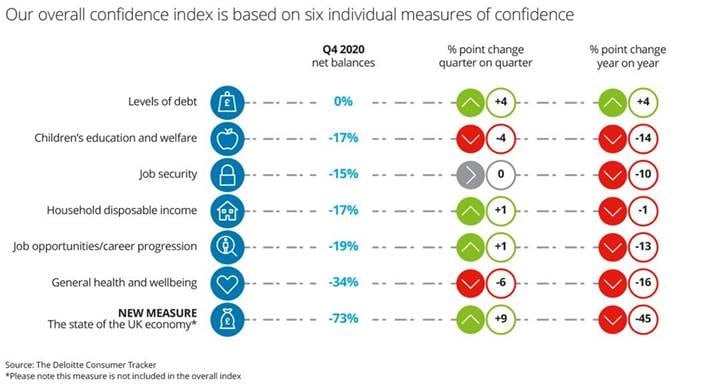 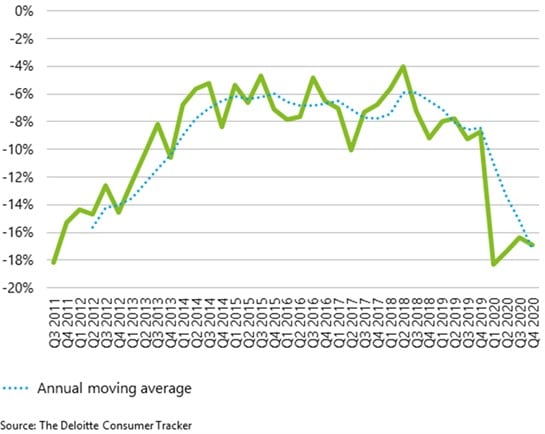 About the research
The Deloitte Consumer Tracker is based on a consumer survey carried out by independent market research agency, YouGov, on Deloitte’s behalf. This survey was conducted online with a nationally representative sample of more than 3,000 consumers in the UK aged 18+ between 1st and 4th January 2021. Overall consumer confidence is calculated as an aggregate of six individual measures: job security, job opportunities, household disposable income, level of debt, children’s education and welfare, general health and wellbeing. Since Q3 2019, respondents have been asked their view on the state of the UK economy.