Izzy Wray, a consultant in Deloitte’s Sports Business Group, provides analysis on the increasing popularity of women’s football and how this is driving demand for unbundling women’s football rights from the men’s equivalent as rights holders and brands seek to capitalise on the growing commercial opportunities within the women’s game.

Increasing popularity and changing social attitudes are driving demand for unbundling women’s football rights from the men’s equivalent thereby boosting overall commercial revenues in the women’s game. In four of the top women’s leagues (France, Germany, UK, USA), 60% of teams have a front-of-shirt sponsor that is different to the men’s equivalent. As clubs, rights holders and potential commercial partners recognise the financial benefits of unbundling, it is expected that this will rise to 100% by the time of the 2023 Women’s World Cup.

The inclusion of women’s football metrics in the most recent edition of the Deloitte Football Money League (which profiles the top 20 highest earning clubs in football) signifies the rising prominence of women’s football and its growth in popularity amongst sports fans, the media and commercial organisations. This has led to an increase in unbundling of rights to women’s football from their men’s equivalent club or competition. We expect this trend to continue, and as it does, both rights holders and current/potential commercial partners will need to consider the impact this may have on their strategic approach to women’s football.

Awareness and popularity of women’s football is growing.

Club attendance records have been broken on an increasingly regular basis, the world record has been broken twice in the last year:

This year’s FIFA Women’s World Cup in France is expected to break attendance and TV audience records. The first phase of ticket sales, launched in September 2018, saw more than 150,000 tickets sold, with Lyon selling all tickets to the semi-final and final fixtures at the Groupama Stadium. A record number of expressions of interest (nine) have been received by FIFA to host the 2023 Women’s World Cup, further signalling the growing interest in the tournament.

The trend towards unbundling of rights

The rising popularity of women’s football is not going unnoticed by large blue-chip organisations:

Extending this analysis further the chart shows, for four of the top women’s football leagues globally, the percentage of clubs with a distinct front-of-shirt sponsor to their men’s equivalent. Of the clubs with a men’s equivalent, 60% have a distinct front-of-shirt sponsor. As clubs, rights holders and potential commercial partners recognise the financial benefits of unbundling, it is expected that this will rise to 100% by the time of the 2023 Women’s World Cup. 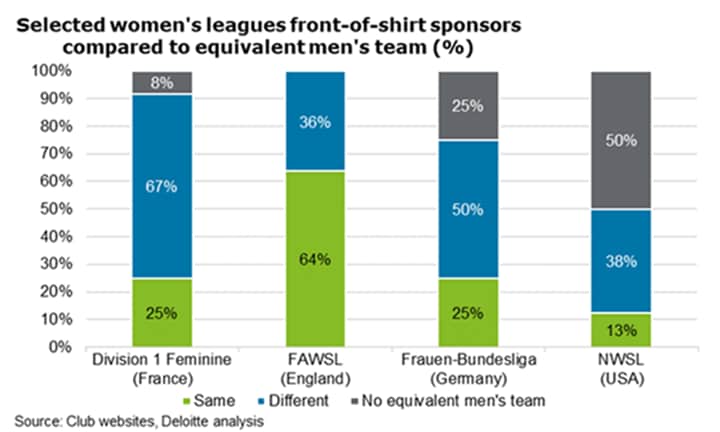 The majority of clubs in the top women’s football league in France, Germany and the USA have a main (front-of-shirt) sponsor specifically for their women’s team. The proportion in England (36%) is lower, with only four clubs having a different main sponsor for their women’s team. Teams playing in England also have the highest proportion of equivalent men’s team’s playing top flight football: 73% compared to 58% in France and Germany, and 50% in the USA. This reflects the commitment to, and investment in, the women’s game by many of the biggest English clubs. Given the commercial value of top flight men’s football, it may be that clubs have previously thought that unbundling rights to the women’s team, as opposed to selling it together in their established men’s team brand, would not provide a significant incremental commercial benefit.

Why unbundling is a step forward for women’s football?

In instances where rights to a women’s football club or competition have been bundled as part of a broader package with the men’s equivalent, commercial partners and broadcasters have tended to primarily focus on, and value, the men’s club or competition, with the women’s equivalent not necessarily viewed, or valued, on its own stand-alone merits. However, the mind-set of organisations is changing rapidly, from one in which investing in women’s football was often seen as primarily an exercise in corporate social responsibility to a mind-set that is realising the potential advantages to be gained from investing in a rapidly growing high potential area of the world’s favourite sport.

Unbundling of rights can enable brands with a specific interest in the women’s game or without the financial resource to invest in the top level of the men’s game to build an association with an elite women’s club or competition. For many corporate sponsors, association with women’s sports may closely align with their existing strategic priorities and provide a unique, and relatively low cost, partnership opportunity. In addition, unbundling allows clubs and current/potential sponsors to track the value of sponsorship in women’s football, something that is more challenging when rights are bundled together.


What does this mean for women’s football teams/competitions?

The recent unbundling of women’s rights means that there is an increasing need for teams and competitions to have a strategy that can maximise commercial value provided to, and obtained from, commercial partners.

The marketplace for women’s football is not the same as it is for men’s football therefore both rights holders and brands are currently learning how they can maximise the value within the women’s game. For example, the value in women’s football for commercial partners may come more from what the whole package of partnering with a women’s football team gives the organisation than the increased visibility that the partnership offers.

Both rights holders and brands will need to consider:

Deloitte Sports Business Group has supported numerous rights holders and brands seeking to define and develop their commercial and / or sponsorship strategy.