Growth is slowing, but remains positive. With manufacturing in recession, private consumption is now the main growth engine for the region.

The economic situation in the Eurozone has remained on the same path since the start of the year. The export-oriented continent still suffers from uncertainties related to global trade conflicts and the resulting unwillingness of corporates to invest. Consequently, growth has been slowing, but remains positive. Private consumption is a crucial factor that can counter a slowdown that could lead to a recession. Driven by still-strong labor markets, private consumption is the key growth engine of the Eurozone economy. Through this article, we take a deeper look at the state of the European consumer in light of the current performance of the major economies in the Eurozone.

Owing to headwinds from international trade and the ongoing uncertainty surrounding Brexit, the manufacturing sector in the Eurozone has been in recession the whole year. The impact of political factors has become very palpable. For example, Germany’s car exports to the United Kingdom have fallen by 23 percent since the referendum in 2016, mainly caused by Brexit-related uncertainties and the appreciation of the euro versus the pound.1

The sectoral trend of value-added growth highlights the relative underperformance of the manufacturing sector (figure 1). While the recent Ifo Business Climate Index indicates that the German manufacturing sector might have bottomed, a fast recovery seems unlikely given the uncertain external environment.2 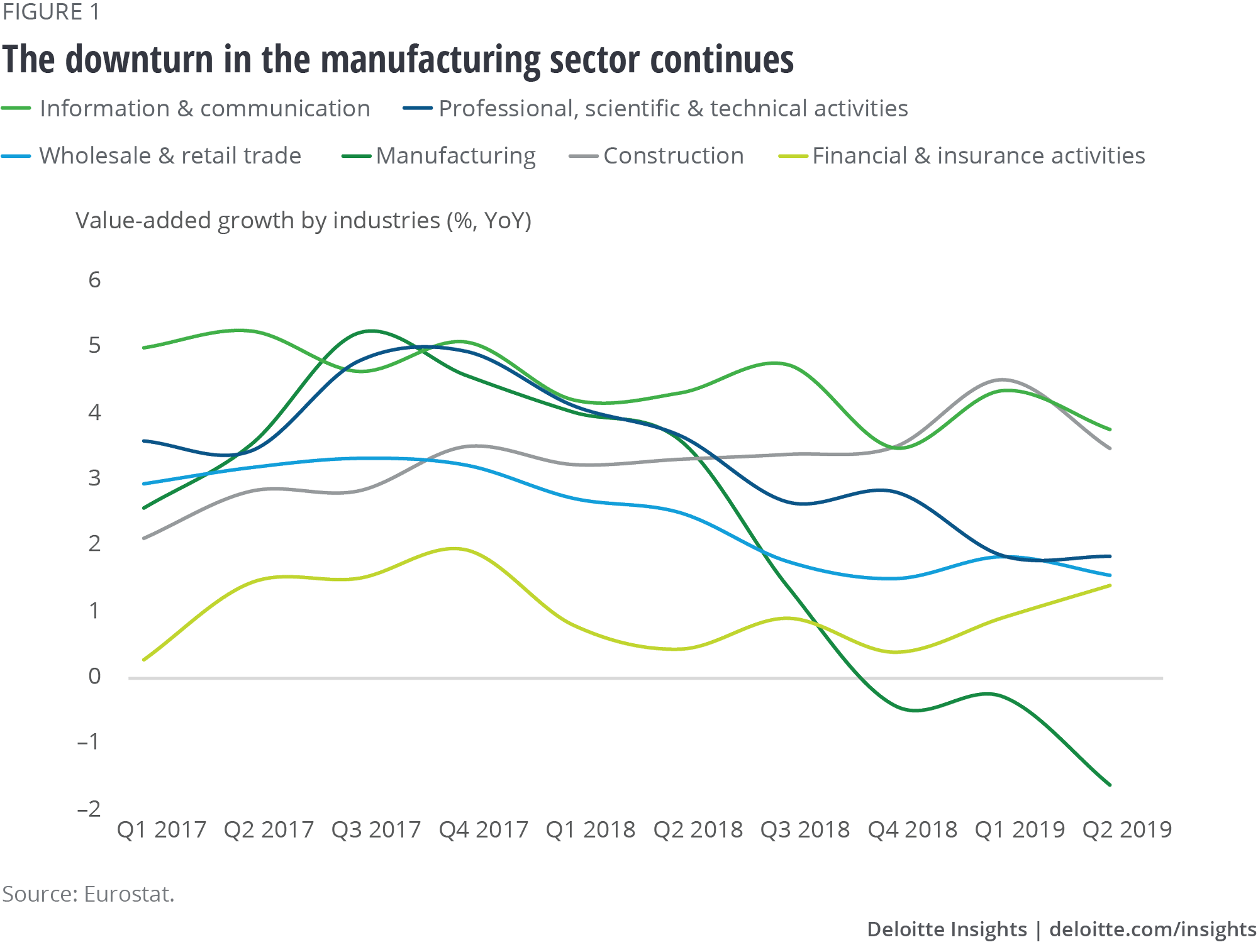 The industrial recession affects Germany especially, given its strong focus on manufacturing. However, Germany is hardly alone; among the other big Eurozone economies, Italy also has a strong manufacturing base. Conversely, countries that are less reliant on exports and manufacturing are doing better. Looking at the quarterly growth rates, Spain is still the best performing of the major Eurozone economies (0.4 percent in the third quarter), followed by France (0.3 percent), while the Italian and German economies are stagnating.3

Currently, impulses for growth are mainly coming from consumption rather than investment or trade. Of the 1.15 percent year-over-year economic growth in the Eurozone in the second quarter of 2019, 0.89 percent originated from higher consumption expenditure, while investment and trade contributed only 0.24 and 0.01 percent, respectively.4

The strength of private consumption in the Eurozone owes much to the strong performance of the labor market. Employment and consumption growth have accelerated in a synchronized way in the last few years (figure 2). The Eurozone reached record numbers of employment—as many as five million new jobs were created since 2017 and unemployment fell to 7.4 percent in September 2019 from 9.5 percent in 2017.5 At the same time, inflation has been very low, while real disposable income has been growing.6 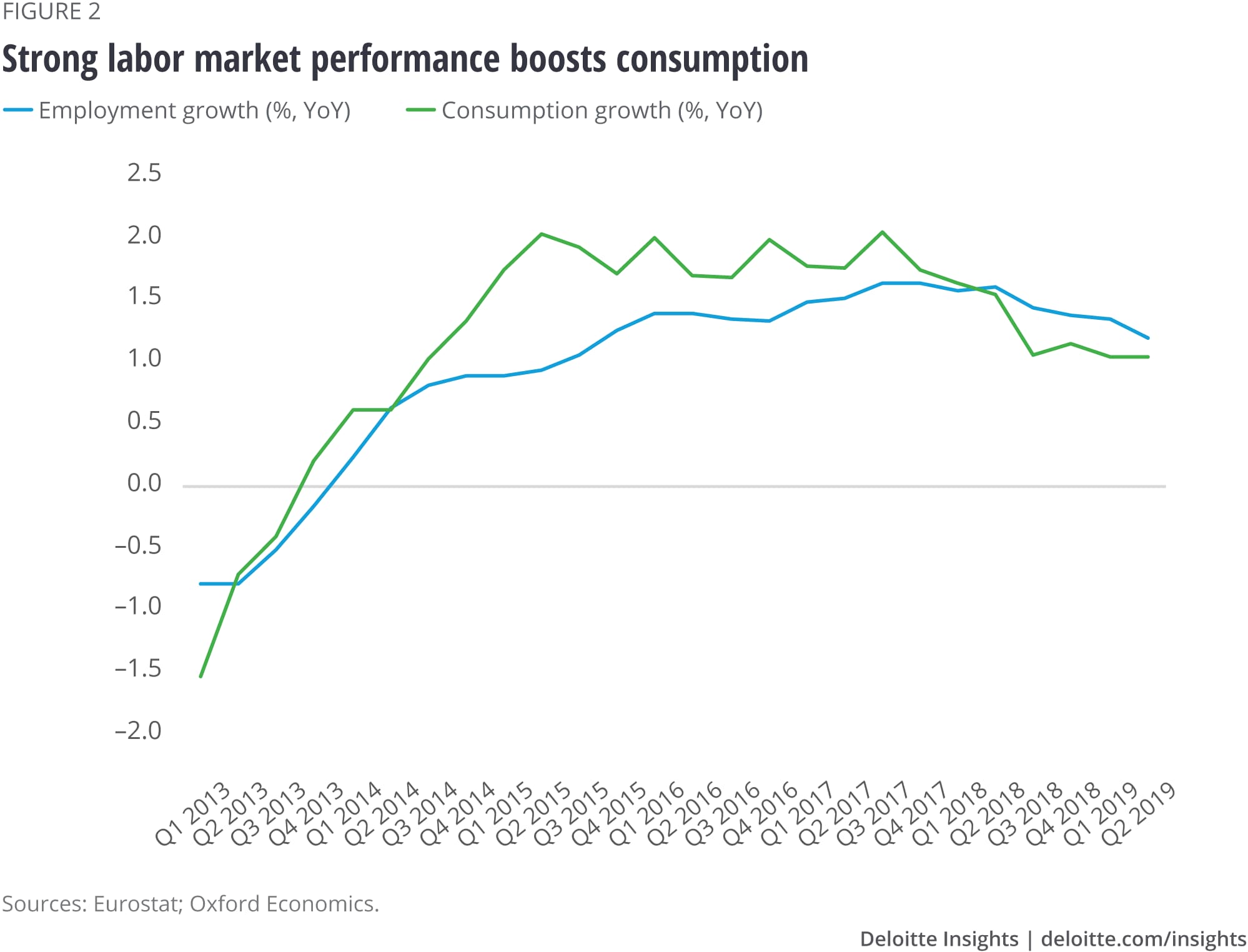 While employment and consumption growth seem to have peaked in 2018, both are still growing (figure 2). Consumer confidence remains positive and well above its long-term average, although it has lost momentum (figure 3). From that perspective, private consumption remains robust. Yet, there are signals potentially indicating higher consumer restraint in the future.

First, the savings rate has been on the rise for the last four quarters (figure 3). This is normally a sign of a cloudier consumer outlook and a greater caution to spend money. At the same time, sales of durable goods have lost momentum since early 2018, which also suggests greater consumer wariness.7 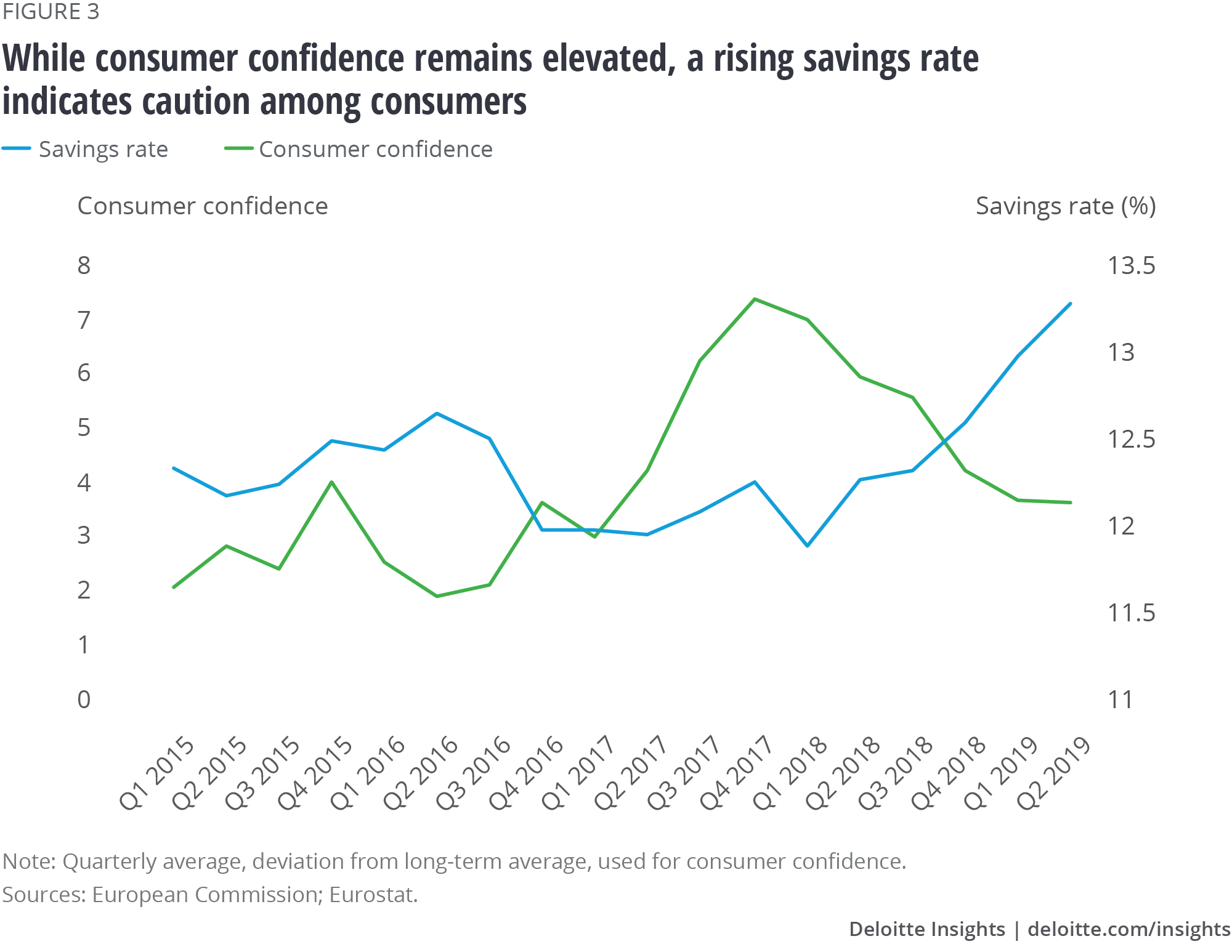 Second, how the weakness in manufacturing will affect labor markets is crucial. A worsening labor market would hurt consumer confidence and spending. Results from Deloitte’s recent European CFO Survey reveal that the hiring intentions of employers are falling in general and, in some sectors, very significantly.8 Hiring sentiment has turned negative for automotive, industrial goods, and consumer goods (figure 4). Nevertheless, they are still positive for services sectors, such as retail and transport. Nevertheless, falling employment intentions of key sectors indicate that the peak of labor market performance is behind us. 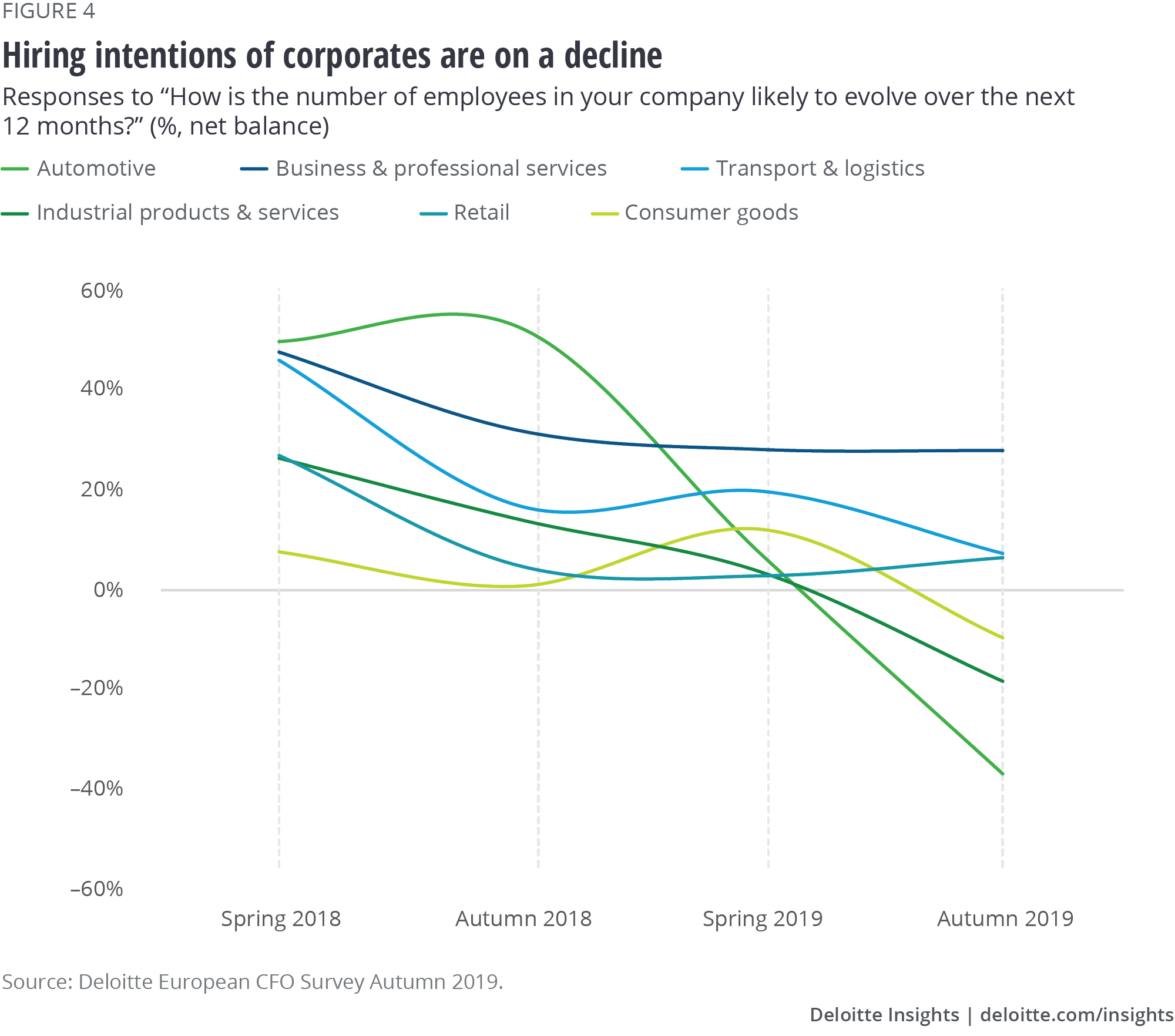 While these signals point to a more negative trend for private consumption going forward, consumers seem torn. According to survey results, consumers have indeed become much more pessimistic about the general economic outlook, but they have also become—somewhat paradoxically—more optimistic about their personal financial situation in the future.9

As long as a positive outlook for the personal financial situation prevails and price pressure remains low (figure 5), a sharp decline in consumption is unlikely. For the moment, the likely scenario is for consumption to grow, albeit at a slower clip. In the medium term—and without an unexpected easing of trade tensions—the trends on the Eurozone’s labor market will largely determine private consumption and, therefore, economic growth. 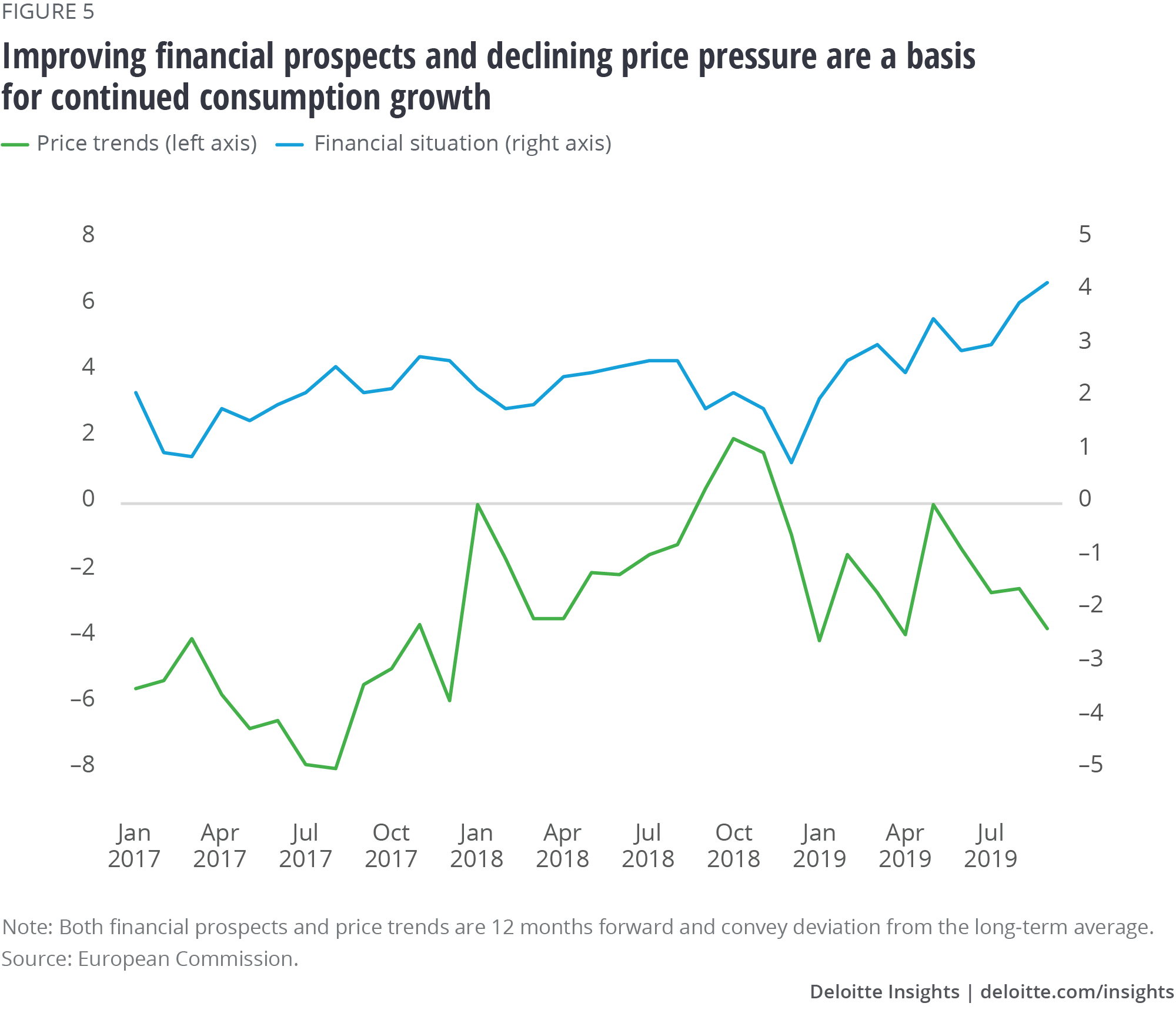 Eurozone has been added to your bookmarks.

Eurozone has been removed from your bookmarks.

An article titled Eurozone already exists in the bookmark library