The mystery of slow inflation in the US economy | Deloitte Insights

The mystery of moderate inflation

US inflation is baffling many bankers and economists. Despite a stronger labor market and economy, inflation has remained stubbornly low. Here, we look at the components that have resulted in low inflation and the possible causes and consequences.

For central bankers, US inflation has been like that stubborn child who digs his heels in and just won’t budge, no matter how much parents cajole and threaten. Inflation has undershot levels suggested by every economic model. With an exception in 2011–12, the US Federal Reserve’s 2 percent inflation target remained out of reach for most of the years in the past decade (figure 1). Even in 2017, when the labor market and economy strengthened, inflation barely moved above the Fed’s target rate (figure 1). With the economy trapped in slow inflation, many economists are puzzled. 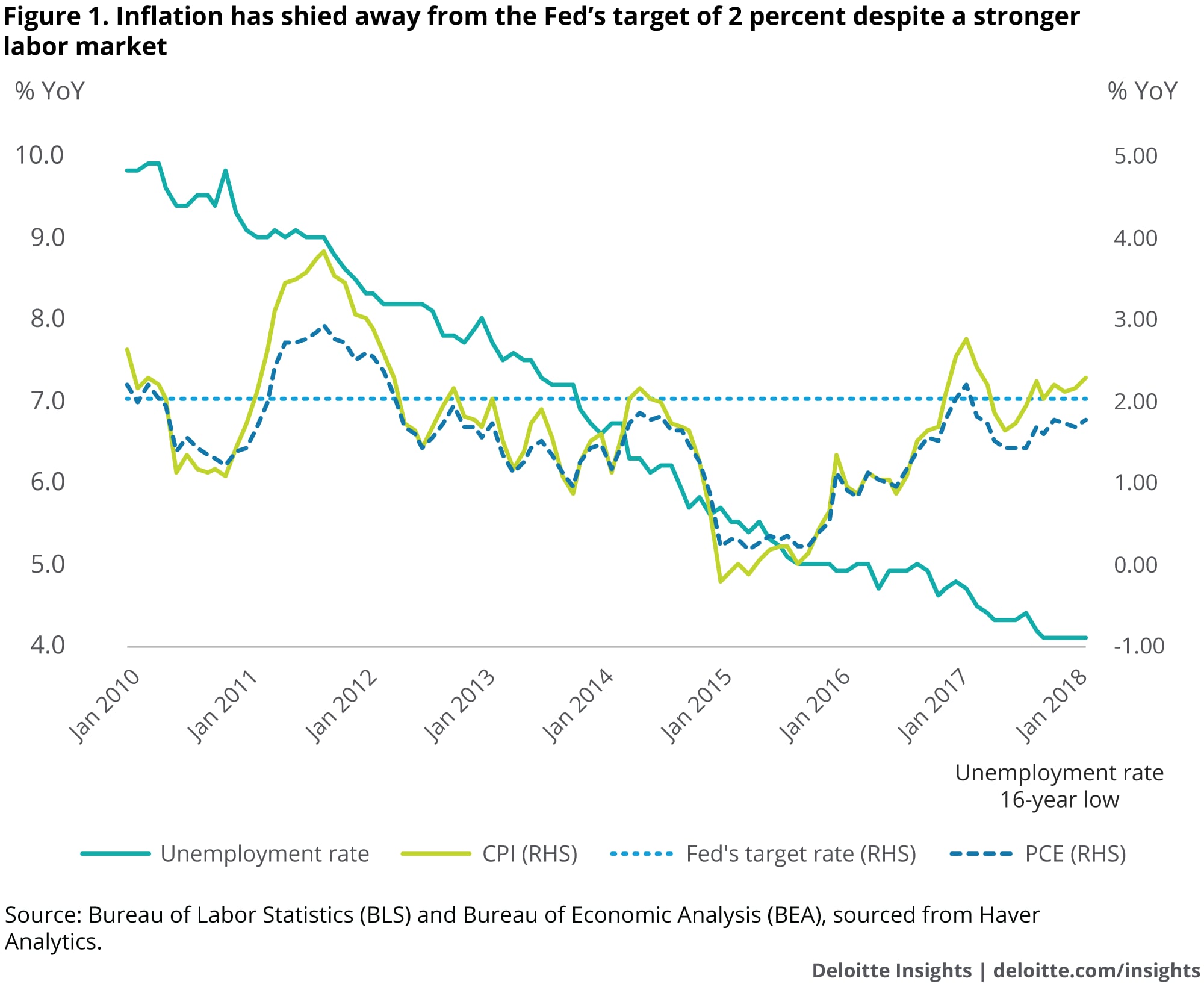 While the headline consumer price index (CPI) marginally moved up above the target rate in 2017, core inflation (excluding food and energy), which had firmed up during 2016, has softened since early 2017 (figure 2). The divergence between core and headline trends over the past year reflects the fact that inflation has been influenced primarily by the acceleration in food and energy prices.1 Oil prices have increased by approximately 40 percent since June 2017. On the other hand, food prices have firmed up primarily due to the rising prices of food at restaurants and service meals. 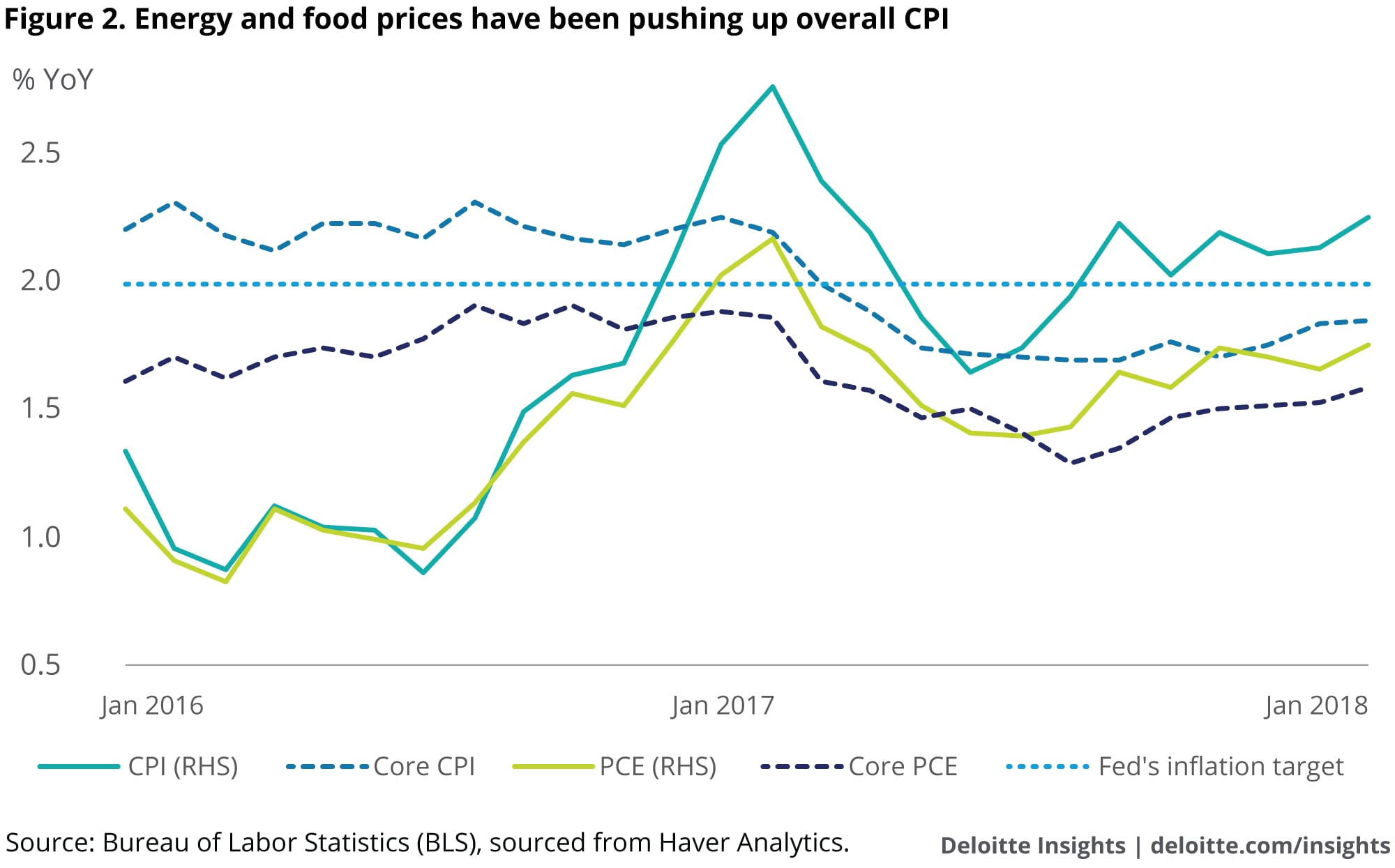 Core inflation accounts for about 79 percent of the total CPI, of which the services component (less energy services) has a relative weight of about 60 percent. Inflation in services (comprising shelter, medical care services, and transportation services) has been above 2.4 percent since 2013 and is primarily responsible for the increase in the core CPI (figure 3). On the other hand, prices in core commodities (less food and energy commodities), which accounts for the remaining 20 percent, have witnessed a consistent fall throughout this period, thereby making a negative contribution to inflation. 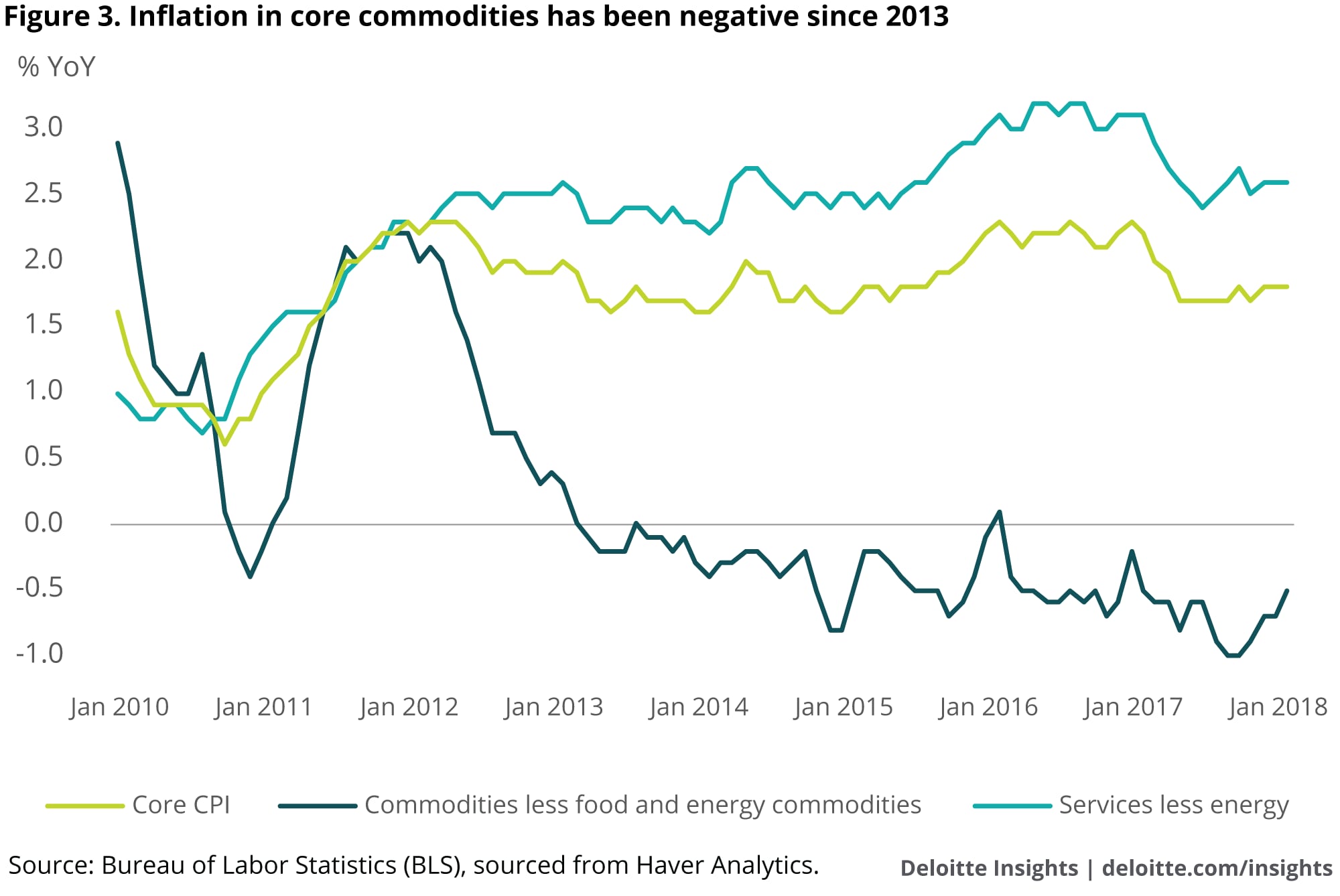 Among the components of core inflation, the primary driver has been shelter, which is responsible for over 55 percent of services’ inflation and 42 percent of core inflation (figure 4). Although among the highest between 2013 and 2016, inflation in shelter has increased marginally since 2017, indicating that acceleration in prices for shelter has remained the same since 2013 (figure 5). This is because rents have continued to rise at the same pace as they did in the past five years.2 The second highest contributor to core inflation was medical care services between 2013 and 2016, but its inflation rate too has fallen since 2017. Among core commodities, transportation net of motor fuel (auto prices), household furnishing and supplies, recreational, and education and communication have the highest weights and have witnessed deflation since 2013 (figures 4 and 5). The rate of this decline increased further after 2017 for most of these categories. Prices for apparel grew post 2017, albeit marginally. Medical care, alcoholic beverages, and other goods (such as tobacco and smoking, cosmetics, and personal care products) were the only categories that contributed positively to the core CPI, but their contribution was largely offset by the rest of the higher weighted categories in core commodities, which witnessed deflation. So why has inflation been low?

The shortfall of inflation from its 2 percent target in 2017 has left many US central bankers scratching their heads over the causes.3 Some possible reasons could be:

The Fed’s dilemma with inflation

If consumers pay low prices for their purchases, one may be led to believe that low inflation is a good thing. It typically is not. A moderate inflation rate is needed for a healthy economy. One reason being low prices translate into low income for producers. With prices stagnating, businesses lose the incentive to increase wages and income, which impacts consumers and their purchasing power. In the past decade, real wages in the United States have not increased substantially. At the same time, the purchasing power of the dollar has been falling, adversely impacting consumer demand (figure 6). 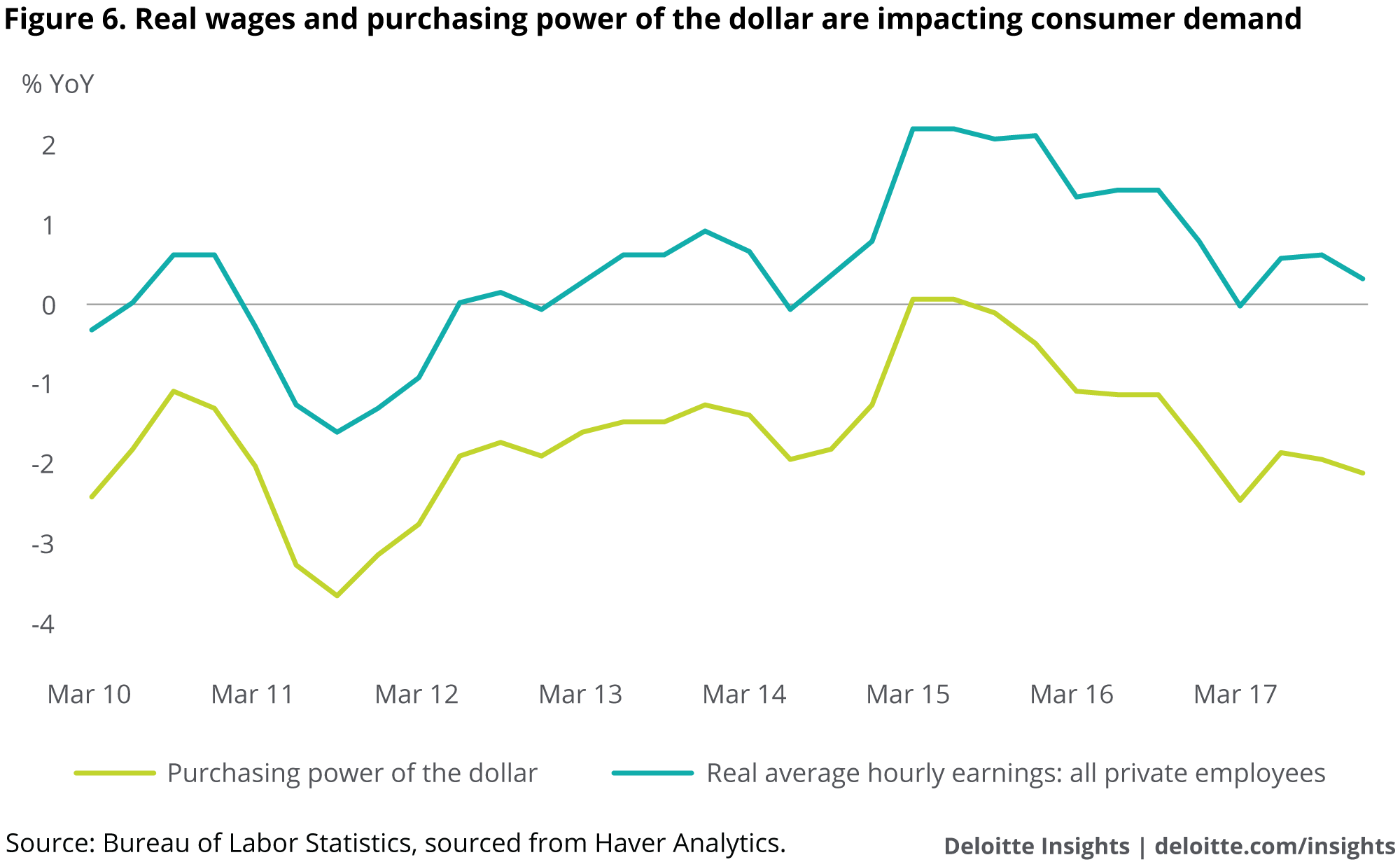 Secondly, if the inflation rate is low with very little inflation expectation, it can put a downward pressure on interest rates. With policy rates being already at historic low levels, the Fed does not have much elbow room to maneuver monetary policy in case there is an economic slowdown. Typically, when a recession hits an economy, cutting interest rates is one of the first ammunitions the Fed uses to give the economy a boost. With the Fed unable to raise interest rates because of a persistently low inflation, it is difficult for the bank to decide the next move. Finally, low inflation for long may signal that the Fed has poor control over inflation or that its commitment to the target inflation is not strong, which likely does not bode well for business confidence.8

Perplexing low inflation and its uncertain future have made it difficult for the Fed to decide on what the interest rates path should be. Besides, it is now expected that the Fed might delay its next move to reduce its balance sheet, which it has been hinting at for some time. These are likely to bring down Treasury yields and the yield curves, compelling investors and savers to take more risks in search of higher returns on investment. This may impact financial and macroeconomic stability. Rising investments in risky assets such as emerging market bonds, student debts despite high delinquency rates, and leveraged loans are evidence to that.9 For now, the Fed is convinced that low inflation is probably an outcome of idiosyncratic factors, which might be temporary.10 However, the sustained fall in prices for core commodities, such as transport, recreation, and communication, is probably an indication that there are structural factors at play, but not yet understood. And if that is true, the Fed likely has a difficult job at hand of simultaneously raising policy rates and inflation beyond its target rate.

Note: For all figures, available data as of April 10, 2018 was considered.

Rumki Majumdar is a manager and economist at Deloitte Services LP. She is located in Bengaluru.

The mystery of moderate inflation has been added to your bookmarks.

The mystery of moderate inflation has been removed from your bookmarks.