Faces of Deloitte Advisory is a series of true stories that explore the personal history of our practitioners, highlighting key experiences that defined their values and explaining why they do what they do. In this story, Monica shares her experiences being raised in a conflict-torn land, beginning her career as a schoolteacher in London, and remaining optimistic while fighting cancer.

I was born in San Francisco to a big Irish Catholic family and greatly enjoyed the California sunshine. That was until I was seven when my dad made a trip to his home country of Ireland and came back with more than a souvenir.

He came back with a longing to return permanently. So instead of moving across the Golden Gate Bridge to Marin, we took a hard right and off we went—all seven of my siblings and me—to Northern Ireland in 1974 without the knowledge of what was going to come next.

Soon after our move came checkpoints and army patrols, helicopters overhead, and bombings. We were Catholics living on the border between Northern Ireland and Ireland, which if you know anything about this area in the '70s and '80s, it was a place filled with sectarian turmoil. There’s a reason this period of history is referred to as the Troubles.

Thankfully, none of this conflict ever directly affected my immediate family, but we did live an odd existence with unrest as a backdrop to my childhood memories. Conflict was our way of life, but as I learned from a young age, you just have to get on with it. I once recall walking to school as an uneasy-looking army patrol carrying rifles walked with us. I asked my brother why they did this. He said because we were their protection—they wouldn’t be attacked by a sniper when they were walking with school children.

I went to Queen’s University Belfast and after graduation I moved to London because I had always wanted to live in a large city. I became a schoolteacher for 30 six-year-olds with strong cockney accents.

A few years passed and I realized that, even though I loved every moment of it, I missed my family and was a little restless. Most of my siblings had moved back to the United States; so in the early 1990s, I followed suit back to my birthplace, San Francisco.

I was trying to figure out what to do for work and so I went back to school for computer programming while working at a bank as a loan file reviewer. After I finished my program, I ended up moving into the IT department where I branched out of programming into network protocols and even taught our executives how to use Windows.

Then, in the mid-1990's, I got a call from a headhunter who said Arthur Andersen was looking for people like me. I had no idea what professional services was, but I got the job with really no idea what I was getting into. I ended up traveling around the world for a few years, even living in Korea for a time, doing IT and security controls.

Once the dot-com bubble was happening, I felt my skills were getting rusty and decided to learn how to do Java programming. So, I left the firm and went to become a consultant in web design. When the bubble burst in 2002, a lot of the partners at Andersen said, “Well it's great that you had your fun, but can you come back now and finish your career?” So I did, but a year later, the firm ceased operations.

I lost my job, I was pregnant with our first child, and we were buying a house. My stress level was very high, and I began to think that I would be better off in industry working at a bank, but that's when a number of partners from Andersen who joined Deloitte called me and asked me to reconsider. When I met the partners and colleagues from Deloitte I was immediately struck by their collegiality and camaraderie, and I wanted to be part of this family.

The rest is history, but not without some twists and turns.

Facing challenges head-on has always been a part of my journey, from growing up in a warzone to figuring out where I wanted my career to go. But my biggest challenge to date had nothing to do with work.

In 2011, I was diagnosed with breast cancer. It came out of the blue. I remember calling Owen Ryan, the CEO of Deloitte Advisory at the time, because I didn't know who else to call, and said, “You know I've got this thing and I'm not sure what’s going to happen, but you know I'll be around to get the work done.” And his immediate reaction was, “I think you need to go start taking care of yourself and you need to find a way to make that a priority, not your work and not your clients. Because that will be taken care of.”

I still didn't realize what that meant until I started going through treatment, which can be exhausting. It often felt like too much. I remember one day specifically where I felt really sorry for myself. I was lying on the sofa and my kids came home from school. My six-year-old daughter said, “Mommy, can I lie down with you?” And I said, “Oh, sure honey.” So, she laid down and at that point I had lost a good amount of my hair.

She looked at me and she said, “You're not going to die, are you?” And I immediately responded, “No, that’s not going to happen.” I think that was the turning point. Because I realized that I was here for other people, too. After that encounter, I was adamant that she would no longer come home from school and find me sitting on the couch. I decided I would have fun things for her to do when she came home—like making a treasure map around our house or garden for her and her brother to find special treats and squeal with delight, or just making forts out of pillows and blankets so we could “camp” indoors.

And to be honest, even during this most difficult of time, I got to spend a lot of time with my children, and it brought me a lot of joy. It happened because I didn't have to concentrate on work. I am immensely grateful to my colleagues who took on my client work, who would see me online and tell me to get off, and who would just text me or email me news about things going on in the office. I was able to stay connected, without the stress. Because of this, I was able to give my kids that attention and so many great memories came from it. I imparted to them that life will knock you down and sometimes you have to be broken down to be rebuilt.

I have tremendous empathy for people in situations that are not of their own making, and I truly believe that everyone has their own unique story to tell. My illness put things in perspective. Sometimes work can really get in the way and you have to constantly remind yourself that you should work hard, but you should also make time for yourself and your family—because, in essence, you're not going to be any good to anybody at work if you're failing in the other parts of your life.

I try to remember that there could be things going on in people’s lives that I don't know about. You need to give people grace without jumping to conclusions about why something's not getting done. And that's both for your colleagues and clients.

I strive to be a leader who not only brings people into Deloitte, but one who keeps people here and who has people on her team that want to stay because they like working with me and each other. I became the leader of the US FSI practice two weeks before we went into lockdown due to the pandemic. I was so proud to see our team come together to weather the unknown and support each other.

In the face of life’s biggest challenges, I like to think I am incredibly resilient and optimistic. Sometimes it's in those lowest points of your life that you find something to celebrate that allows you to persevere. It’s hard to believe how people can still find joy and laugh and smile against life’s most difficult backdrops, but I know it’s possible—and I want to continue to lead my clients and colleagues with that positivity. 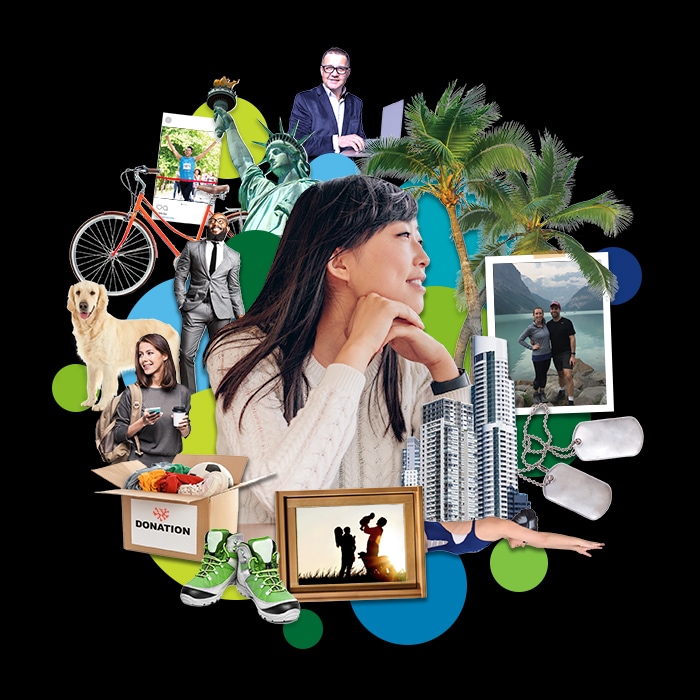 The global pandemic has disproportionately impacted women in the workforce. To regain traction and improve gender diversity in financial services, now is the time for firm leaders to innovate and ramp up DEI strategies.