Back to basics: Board composition and refreshment has been saved

Back to basics: Board composition and refreshment has been removed

An Article Titled Back to basics: Board composition and refreshment already exists in Saved items

Back to basics: Board composition and refreshment

There are many critical facets to board composition. Among them are identifying necessary or desirable backgrounds and experiences and background/experience gaps at any given point in time; responding to evolving regulatory requirements and investor and other stakeholder composition and refreshment expectations; continually evaluating the board’s skill sets against emerging strategic, geopolitical, and other risks and opportunities; and board knowledge, functionality, and collegiality as a whole. How boards are executing on this fundamental responsibility is the focus of this report.

This Board Practices Quarterly looks at director recruitment practices and priorities—including the most and least often recruited professional backgrounds and diverse attributes—and refreshment triggers, policies, practices, and tools. It is based on the findings of a November 2022 survey of Society for Corporate Governance members representing 135 public companies.

Board Practices Quarterly: Board composition and refreshment
Results by respondent demographic

Respondents, primarily corporate secretaries, in-house counsel, and other in-house governance professionals, represent 135 public companies of varying sizes and industries.1 The findings pertain to these companies, and where applicable, commentary has been included to highlight differences among respondent demographics. The actual number of responses for each question is provided.

The findings reveal a departure from the backgrounds and experiences traditionally sought for new directors, such as business leadership and finance:

What triggers drove any recent changes in your board composition in the past 1-2 years? [Select all that apply] (105 responses)

A desire for greater diversity was the most commonly cited reason for changes in board composition, followed closely by an orderly/planned succession to keep the board fresh, at 57% and 55%, respectively. These results differ significantly from a similar question asked in our 2016 board practices survey where the resignation of existing director(s) and retirement of existing director(s) due to age limit policy were the most commonly cited triggers for composition changes (29% and 27%, respectively), followed by orderly/planned succession (22%) and greater diversity (15%). 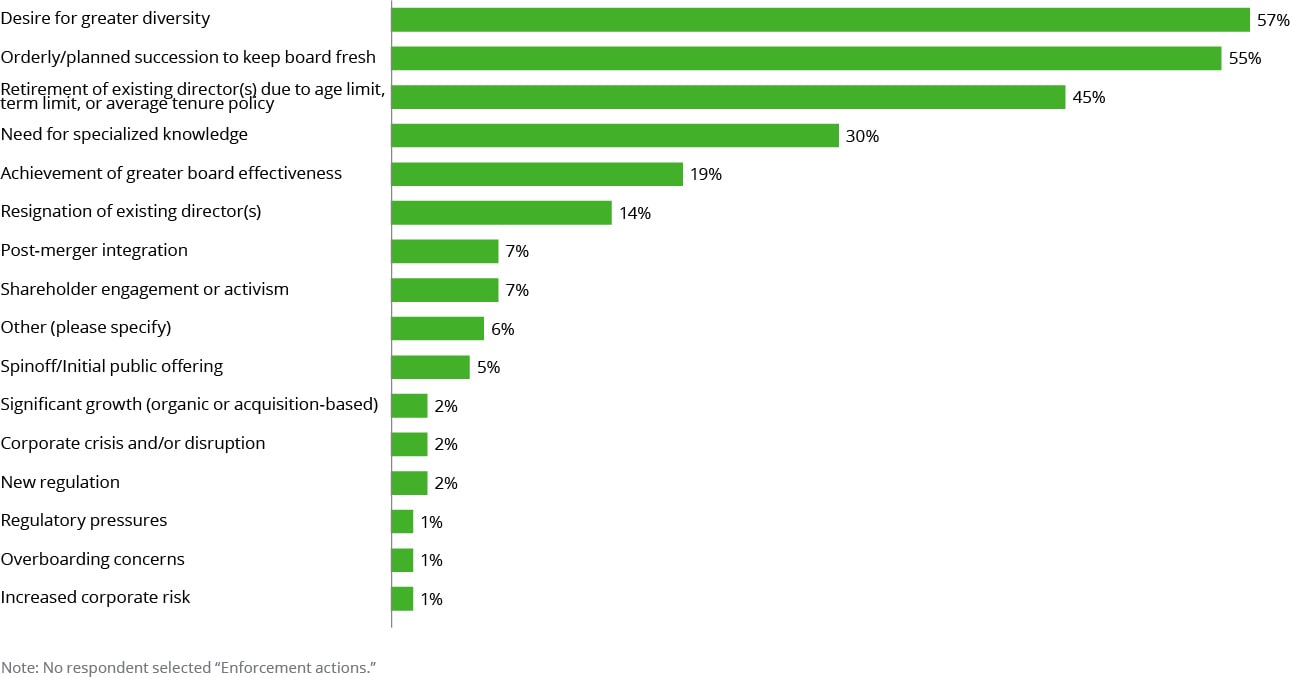 To your knowledge, has your board considered nominating or has your board nominated/appointed an issue-expert director (e.g., cyber expertise, climate expertise) either in response to investor or regulatory pressures or otherwise in the past 1-2 years? [Select all that apply] (107 responses)

Most boards have not considered or nominated an issue-expert director and nearly half indicate that their board generally expects multiple directors to be literate/competent on an issue in lieu of nominating/appointing an issue-expert director.  However, large-caps were more likely than mid-caps to expect multiple board members to be at least literate/competent on an issue rather than nominate/appoint one issue-expert, reported by 51% of large-caps; compared to 37% of mid-caps.

Small-cap and private company findings have been omitted from this report and the accompanying demographics report due to limited respondent population.

Throughout this report, percentages may not total 100 due to rounding and/or a question that allowed respondents to select multiple choices.

Carey is national managing partner of Deloitte’s Center for Board Effectiveness. She leads the Center to help both corporate board members fulfill their governance-related responsibilities and aspirin... More

Insights and benchmarking data for board practices

Back to basics: Board education and evaluations