Fintech today has been saved

Fintech today has been removed

The fintech landscape has entered a new era. After a short period marked by an explosion in new startups and little investment, the tables have turned.

These are the headlines among a series of findings from a recent report from Deloitte’s Center for Financial Services, entitled Fintech by the numbers. For the report, we looked at data about technology startups offering products or services in the financial services industry (broadly, “”) from Venture Scanner to understand where the market is headed. We wanted to know which financial services segments had the greatest number of , which were attracting the highest level of investment, and which countries were the most interesting hotbeds for both.

What we found, broadly, was evidence that clearly pointed to the emergence of a new era in the world, if not a classic industry shakeout. Overall, our data show over 5,000 companies have been founded in the past 20 years across four sectors within financial services: banking and capital markets, investment management, insurance, and real estate. Over 45 percent of these were founded in the boom period of 2012–2015. But the boom is over, for now: Only 41 new companies were added to the Venture Scanner database in 2017 (through mid-September; see figure 1). 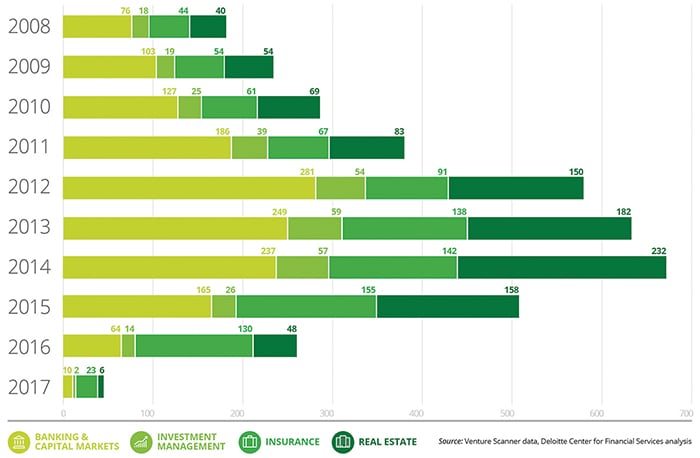 Investment interest, however, has not seen a similar drop-off. To the contrary, the amount of new investment in continues to increase in all sectors except insurance, which is a trend that started in large measure in 2014. And not only is investment rising, but the type of investment suggests that many are maturing. As an example, more companies are receiving later-stage venture capital funding. We note also the presence of private equity firms, those providing debt financing, and steady increases in initial public offerings and acquisitions. These trends suggest that many founders have grown up, from three techies in a garage to legitimate business leaders with both revenue and a plan for growth.

The United States and China: Hotbeds for fintech investment

The most interesting geographic dichotomy is found in the contrast between the two biggest hotbeds for investment: the United States and China. As noted in our report, while the dollars are similar, the US world is still made up of thousands of smaller companies, while in China, large diversified companies command most of the investment interest.

A good example here is in the payments category. In the United States, 264 companies have received a total of $7.71 billion in investment since 1998, but mostly within the past five years as mentioned above. Contrast that with China, where only seven payment are found, but these are backed by $6.92 billion in funding. Similar patterns are seen in lending, investment management, personal insurance, and real estate leasing/purchase and sale.

These statistics are presented against a backdrop that suggests a different kind of sea change in the ecosystem. It’s been well-documented that incumbent financial institutions are changing their perspectives on . A recent report from the World Economic Forum, produced in collaboration with Deloitte, points out that while have changed many of the dynamics around digital transformation in the industry, they haven’t changed the competitive dynamic. Traditional firms have not lost their clients to nimble tech startups, but they’re having to adapt to a faster pace of change. And so they need to figure out how to assess the landscape, identify weaknesses that a collaboration could address, and team with these smaller companies in a way that benefits both.

We conclude the report with steps firms should be taking now to succeed in fintech collaboration. But we plan to go further. We are now developing a follow-on publication that examines the state of collaboration between incumbents, fintechs, and incubators to understand at a more granular level what’s working, and what’s not. Be on the lookout for the release of that report later this spring. In the meantime, we hope you enjoy Fintech by the numbers.

Were any of the statistics a surprise to you? Has it changed your thinking about the ecosystem? Are you planning to engage more with these startups?

A pragmatic assessment of disruptive potential in financial services