Ten years after the financial crisis has been saved

Ten years after the financial crisis has been removed

Ten years after the financial crisis

How banking systems have changed around the world

It is indeed hard to believe that almost a decade has passed since the financial crisis. Obviously, much has changed, both in the banking industry and in the global macroeconomic environment. The industry as a whole is on much firmer ground, and while the debate about scaling back some of the post-crisis regulations continues, particularly in the United States, a key question is what have been the notable structural shifts in the banking industry globally.

A recent report1 from the Bank of International Settlements (BIS) addresses this issue directly. It is a comprehensive report analyzing how the global banking industry has evolved over the last decade in different countries.

No doubt, some of these strategies are still in motion, especially for the large European banks. These changes, particularly for banking systems in advanced economies, have also resulted in low profitability. For example, average return on equity (ROE) for the banking industry in the Euro area plunged to 4.4 percent in 2016 from 10.7 percent in 2006; the numbers for the United States are more encouraging—9.3 percent in 2016, compared with 12.5 percent in 2006.2

Nevertheless, banks have also3 become more resilient and “strengthened their risk management and internal control capabilities.”4 Post-crisis regulations, in particular those related to capital, liquidity, stress testing, and recovery and resolution planning have nudged banks into a healthier state, as reflected by higher capital and liquid assets, nonperforming loans, and other measures.5

The BIS report also discusses other structural changes, such as capacity, lending to the real economy, capital markets activities, and international banking. In general, the shifts are not uniform—not surprisingly, countries most affected by the crisis have experienced the most negative change. This was also revealed in a survey Deloitte conducted among business executives around the world last year.

In addition to these discussions, the report also contains some cross-country data in the appendix that are quite illuminating. In particular, I found the data around the relative size of banking systems somewhat eye-opening.

There is much debate both in academic circles and elsewhere as to the optimal size of the financial industry relative to gross domestic product (GDP).6 For instance, the contribution of the US financial system to GDP grew from 2.8 percent in 1950 to 8.3 percent in 2006. (It now stands at 7.3 percent.)

But how does the size of the US banking system compare to its counterparts in other countries?

Figure 1 shows the proportion of assets in the domestic banking industries relative to GDP. This, in my opinion, is a good yardstick.

First, even before the crisis, the US banking industry (as measured by total assets) was no larger than GDP—it stood at 94 percent of GDP in 2006. Since then it has declined somewhat to 91 percent in 2016. Now contrast this with other developed economies, such as the United Kingdom (392 percent in 2016), France (388 percent), or the Netherlands (368 percent). These differences are striking. These countries’ long history with international trade over the last 300 years may have something to do with it. Perhaps not surprisingly, the two markets with the highest relative size of the banking system are Hong Kong and Singapore, with 829 percent and 586 percent of GDP in 2016. These two economies rely heavily on their financial systems to bolster their role in international commerce. 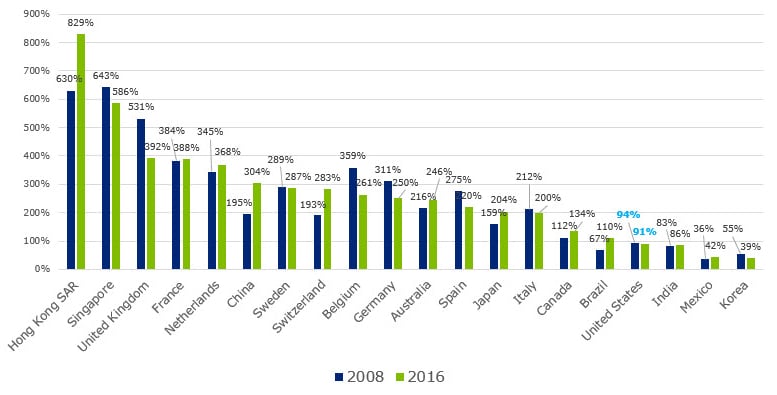 Changes around the globe in banking system sizes

On the positive side, Brazil and China, which were not as severely affected by the crisis, grew the most. In the case of China, the banking system grew by 56 percent, in contrast to the banking system in India, which increased by only 4 percent. This vast difference between the two most populous countries, in my opinion, might have to do with variation in market competition and regulatory regimes. 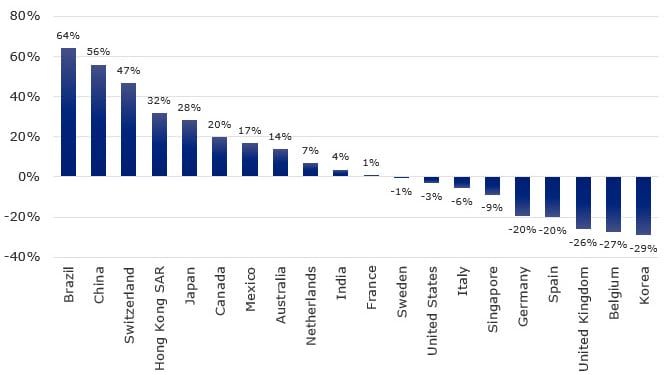 Optimism for banking and capital markets