Brazil: Uncertain days ahead for the economy

Brazil: Uncertain days ahead for the economy

​Brazil saw modest first-quarter economic growth, but its outlook is cautious. Among areas that could weigh on growth are stalemated budget overhauls, trade uncertainty, and a potentially contentious presidential election in the fall.

For much of last year, Brazil’s economy held promise in the light of key reforms and a revival in growth after eight quarters of contraction in 2015 and 2016.1 The central bank also embarked on a loosening spree, trying to provide relief to the economy as the government focused on getting its fiscal health back on track. And financial markets cheered along. The economy and financial markets, however, often tend to play spoilsport, especially if short-term momentum is not followed by what the economy typically needs to boost growth over the medium to long term: continued fiscal and structural reforms. And currently, that’s what appears to be happening in Brazil. Euphoria about initial reforms—such as the one on putting a lid on the budget and labor reforms—have given way to stalemate, as pension reforms get stuck.2 Growth too has slowed and there seem to be fears of trade wars looming over the global economy. Add to these a weakening currency and political uncertainty over presidential elections in October,3 and one may feel that the recovery that started in 2017 is unlikely to pick up speed in the near term.

Growth picked up in Q1, but remained low

Brazil’s economy grew (quarter over quarter, seasonally adjusted) for the fifth successive quarter in Q1 2018. Real GDP grew by 0.4 percent, up from a 0.2 percent rise in Q4 2017 (figure 1). Private consumption grew by 0.5 percent, providing much-needed succor to the economy and accelerating from a 0.1 percent rise in Q4 2017. Exports and investments were other key contributors to the economy (figure 2). Exports, recovering from a contraction in the previous quarter, grew by 1.3 percent in Q1. The outlook for exports, however, is mixed in the near term, with rising risks to international trade due to tariffs and protectionist rhetoric elsewhere4 likely to be offset by elevated commodity prices. As Brazil’s economy is relatively closed—exports account for a little more than 14 percent of GDP compared with, for instance, 20 percent for neighboring Argentina and emerging market peer India—the damage may be limited. Brazil being a key producer of soybeans may also find China’s retaliatory tariffs on US soybean to its advantage.5 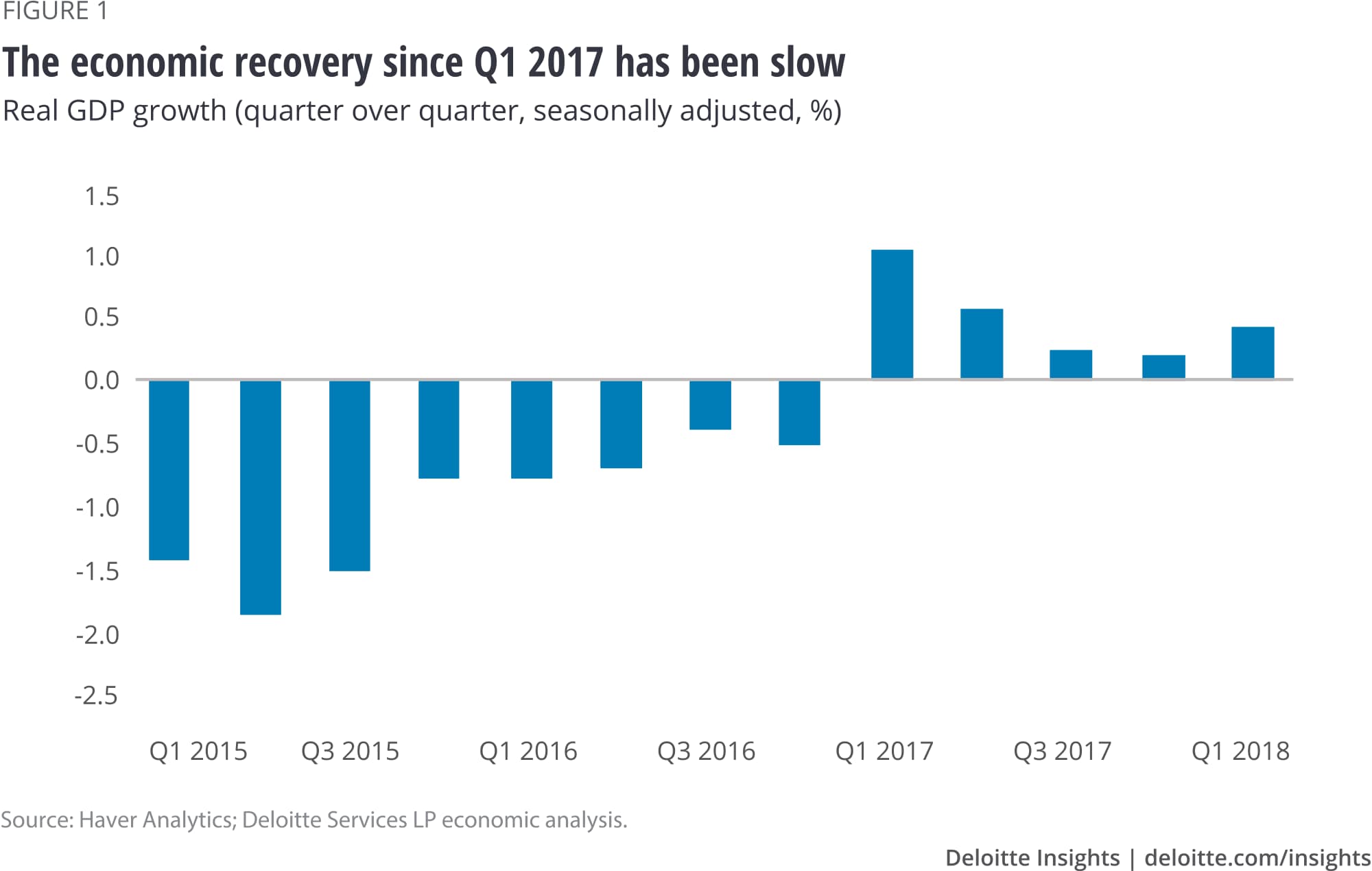 Investments recover, but not by much

A multitude of factors is likely weighing on investments in the economy, despite the modest recovery underway. The manufacturing sector, for example, faces restrictions on exports of steel and aluminum to the United States—while steel manufacturers have agreed to cut exports by one-fifth, aluminum exports will face an additional 10 percent surcharge on current tariffs.6 The timing of such restrictions and a slowing economy will likely cloud the outlook for the wider manufacturing sector. The sector contracted by 0.4 percent in Q1, reversing from the previous four quarters of growth, and there is ample excess capacity—at 78.1 percent in April, capacity utilization has a long way to go to reach the peak witnessed in early 2008 (figure 3). Adding to any potential worries of businesses could be uncertainty—both internal and external. A dip in appetite for emerging market assets, as interest rates rise in the United States,7 has weakened the real—so far, this year, the real has fallen by about 13 percent against the US dollar. A failure to pass critical pension reforms and political uncertainty before presidential elections this year seems to also be making businesses cautious. For example, after a broad upward trend since mid-2015, manufacturing confidence fell marginally in the last few months. No wonder then that growth in gross fixed capital formation has slowed in Q1; at 0.6 percent quarter over quarter, the figure is still below the previous three quarters’ expansion. This trend is unlikely to change until a new government is formed post elections and a clear policy road map is in place.

Still could be a long road ahead for consumers

Consumers were a driving force of the economy for a few years until economic contraction, high inflation, rising unemployment, and surging borrowing costs seemed to affect their purchasing power. While consumption has been reviving since Q1 2017, the pace of expansion is much slower than 2005–2011 when private consumption expanded on average by close to 5.4 percent annually. And despite five straight quarters of growth, the level of real private consumption in Q1 was still 6.2 percent below the peak of Q4 2014.

The recovery in private consumption is unlikely to accelerate. First, inflation may likely edge up due to elevated global oil prices. Gasoline prices in the country, for example, went up by 21.5 percent year over year in May, following an 18.0 percent rise in April. Its immediate impact on wider inflation was limited, but is likely to be felt more in coming months (figure 4). Disruptions due to the recent truckers’ strike could add to the price discomfort.8 Second, due to a relatively slow economic recovery underway, the decline in unemployment has stalled. In fact, the unemployment rate (three-month moving average) went up in Q1 to 13.1 percent from 11.8 percent in the previous quarter. Finally, with the real weakening and its impact on imported inflation, inflation expectations will likely move up. This may prompt the central bank to raise rates by the end of this year, thereby nudging up the cost of borrowing. 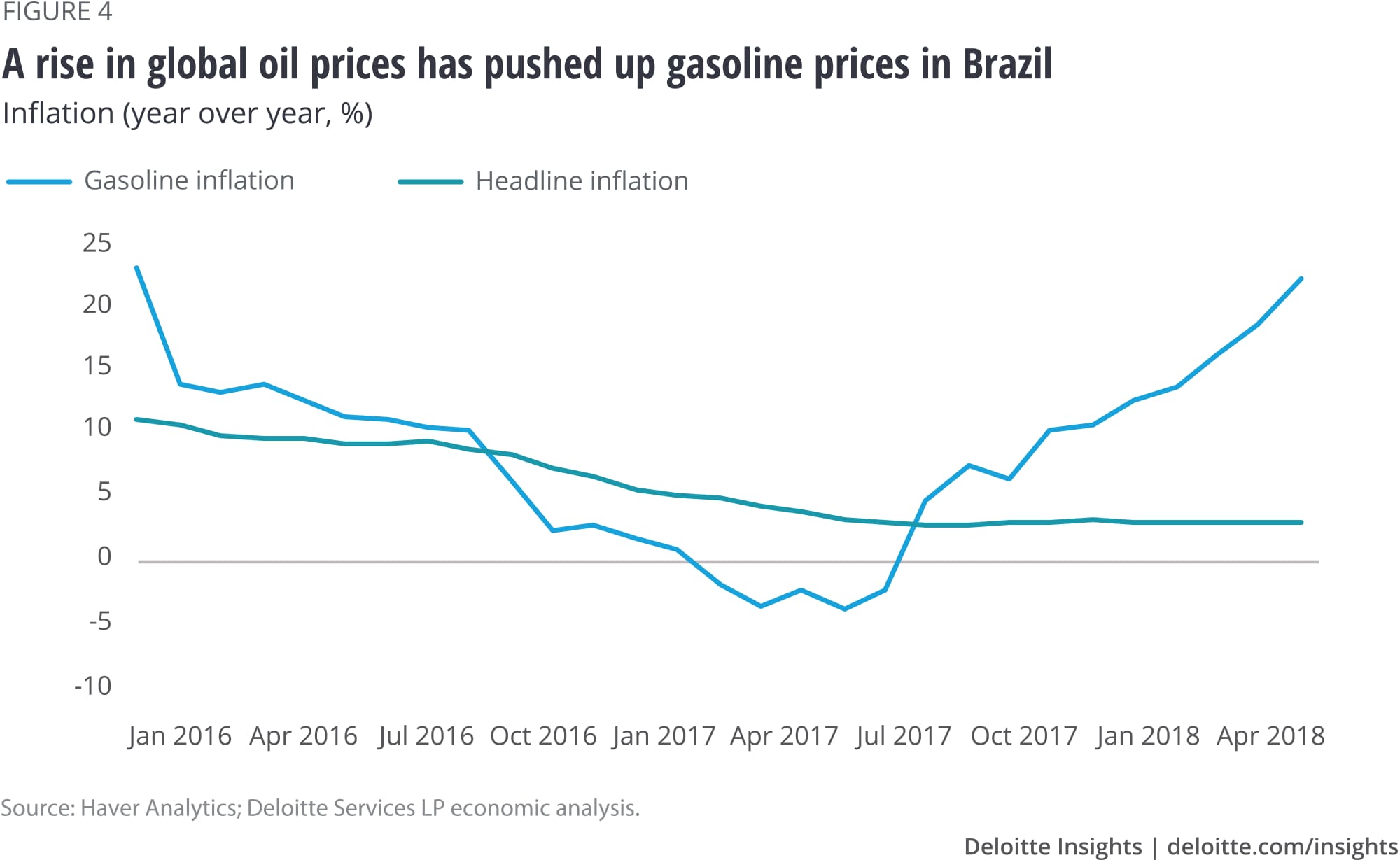 Fiscal prudence will likely be the focus

Uncertainty regarding the economic trajectory was perhaps most evident from the Banco Central do Brasil’s (BCB) monetary policy committee meeting in May when, contrary to most expectations, BCB did not ease monetary policy further and kept its policy rate unchanged at 6.5 percent.9 While the hit to the Brazilian real in recent months and its implications for imported inflation were likely key factors behind the reversal from a dovish stand—inflation is still much below BCB’s target mid-point inflation rate of 4.5 percent—the central bank (evident from its June meeting as well) is likely wary about the uncertainty ahead of presidential elections in October and the agenda of future reforms.10 Any government that takes over is expected to reform the current pension regime; pensions amount to nearly one-third of government expenditure and this share is likely to grow over the long term, if left unchecked. Also, in the absence of pension reform, it will likely be difficult to implement the cap on real government spending.

Pension reform or the lack of it is so far not the sole worry for long-term sustainable economic growth. Measures to improve long-term economic competitiveness, including reforming the taxation regime and investments in human capital, are important to boost potential GDP growth over the long term. However, until the time that a newly elected government takes charge and brings out a clear policy road map, consumers and businesses can only wait and watch.

Brazil: Uncertain days ahead for the economy has been saved

Brazil: Uncertain days ahead for the economy has been removed

An Article Titled Brazil: Uncertain days ahead for the economy already exists in Saved items