Brazil Signs of a recovery but much depends on the pandemic

An incipient recovery is underway but uncertainty around the pandemic and deterioration of public finances due to strong fiscal stimulus measures will remain areas of concern.

Brazil slipped into recession in the second quarter of 2020 as the spread of COVID-19 across the country1 weighed on economic activity.2 People’s worries about contracting the virus, social distancing measures, and a deterioration in the labor market affected consumer spending in Q2. The pandemic and its economic impact so far have also added to the uncertainty for businesses that have cut down on investment spending. While fiscal stimulus and monetary easing have aided a nascent economic recovery in Q3, it is too early to say whether there will be any swift upward movement in growth. For much depends on the trajectory of the virus itself for which there is no vaccine3 or treatment so far. And while any recovery is welcome in the near term, the rising fiscal stimulus costs will likely stoke investors’ concerns about Brazil’s debt and deficit levels in the medium term.

A sharp contraction for the economy in Q2

Brazil’s entry into a recession has dealt a blow to the slow and fragile recovery that had been underway since 2017.4 The economy contracted for the second successive quarter in Q2 2020 as the spread of COVID-19 hit consumer spending and business investment. Real GDP fell by 9.7% in the second quarter compared to the previous one5 with domestic demand declining by 12.7%. Compared to a year ago, real GDP was down 11.4% in Q2. As the pandemic spread across Brazil, consumer spending dropped (figure 1). Social distancing measures and a sharp deterioration in the labor market also had an impact with private consumption contracting by 13.4% in Q2.

Business investment suffered as well during this period, with gross fixed capital formation also falling by 15.2%. While a 14.7% decline in imports and a slight increase in exports aided the contribution of net exports to growth, it was far too less to prevent a strong contraction in the second quarter. Although Brazil fared better in Q2 than some of its emerging market peers such as India and South Africa,6 it is likely that the country’s economic recovery may turn out to be relatively slower than some others (figure 2), according to forecasts by the Internal Monetary Fund (IMF).7 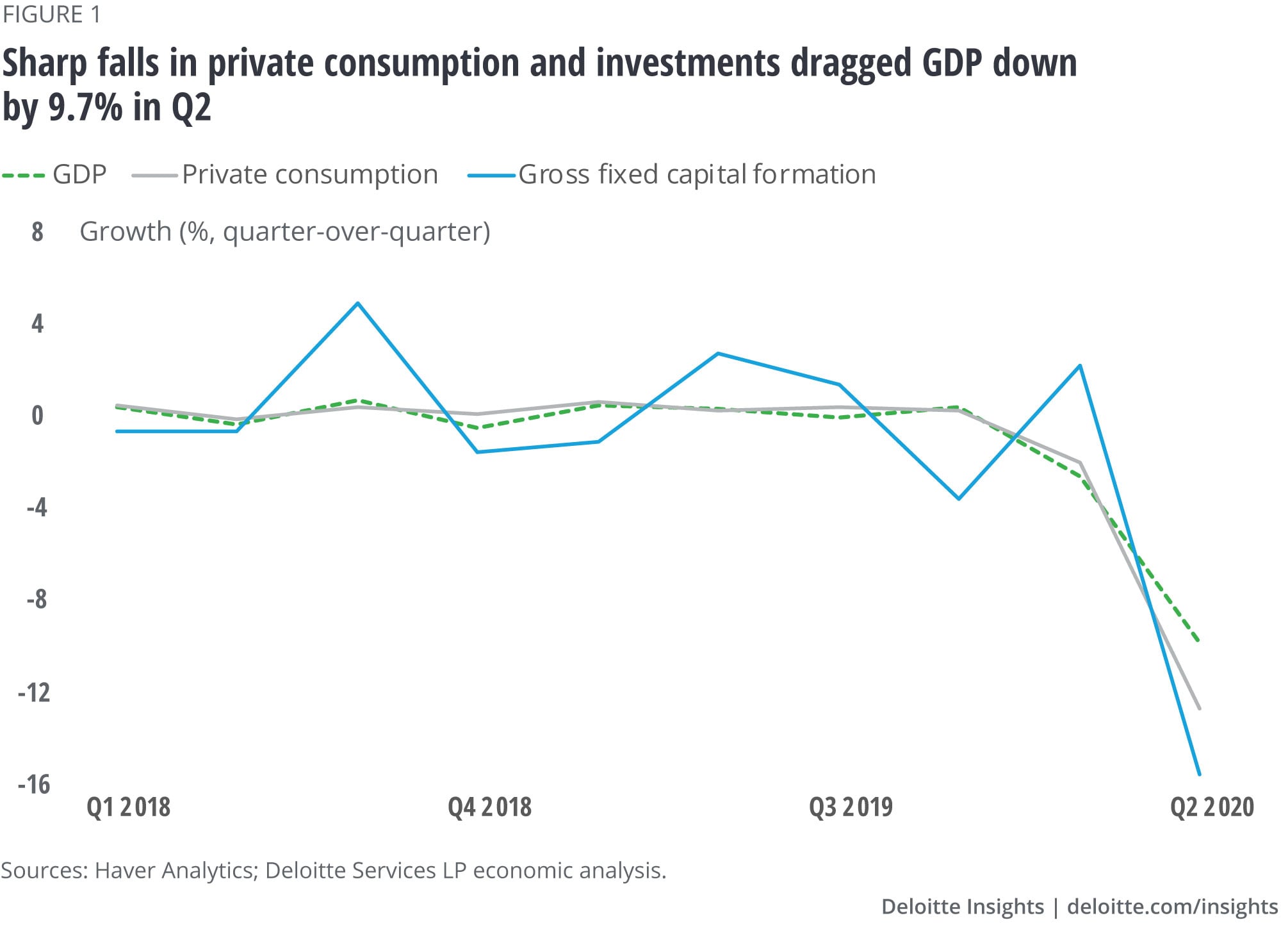 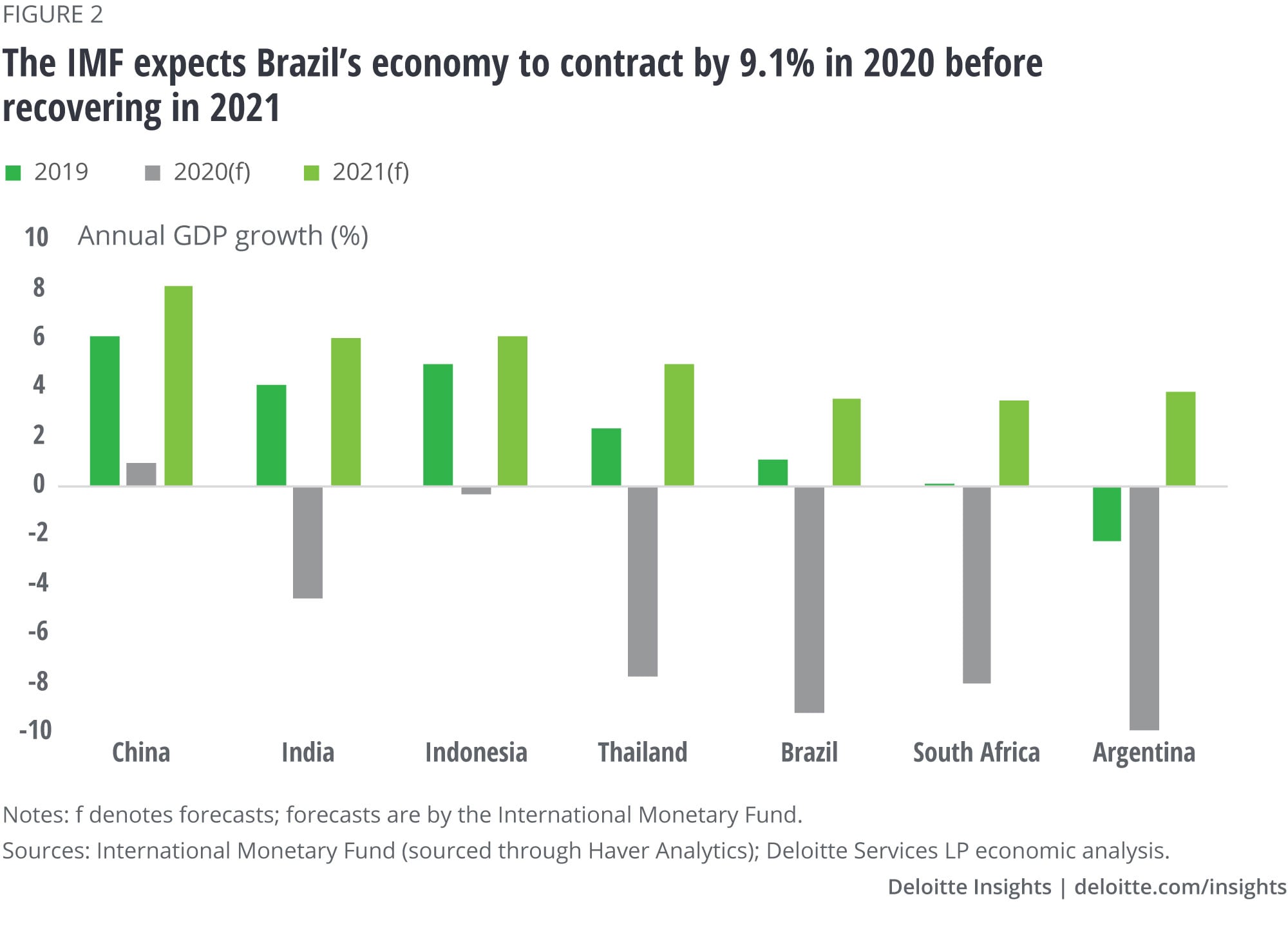 A nascent recovery is underway

Monthly data on key indicators suggests that a nascent recovery is currently underway. Manufacturing, for example, has been recovering after a sharp contraction in April and May, with data for the purchasing managers’ index (PMI)8 suggesting expansions in July and August (figure 3). And sentiment among manufacturers also appears to have recovered with the Getulio Vargas Foundation’s (FGV’s) Manufacturing Confidence Index moving up strongly in September.9 Nevertheless, given the scale of the downturn in the second quarter—the manufacturing sector contracted by 17.4% in real terms in Q2—manufacturing output was still 6.6% lower in July compared to January’s pre–COVID-19 levels. 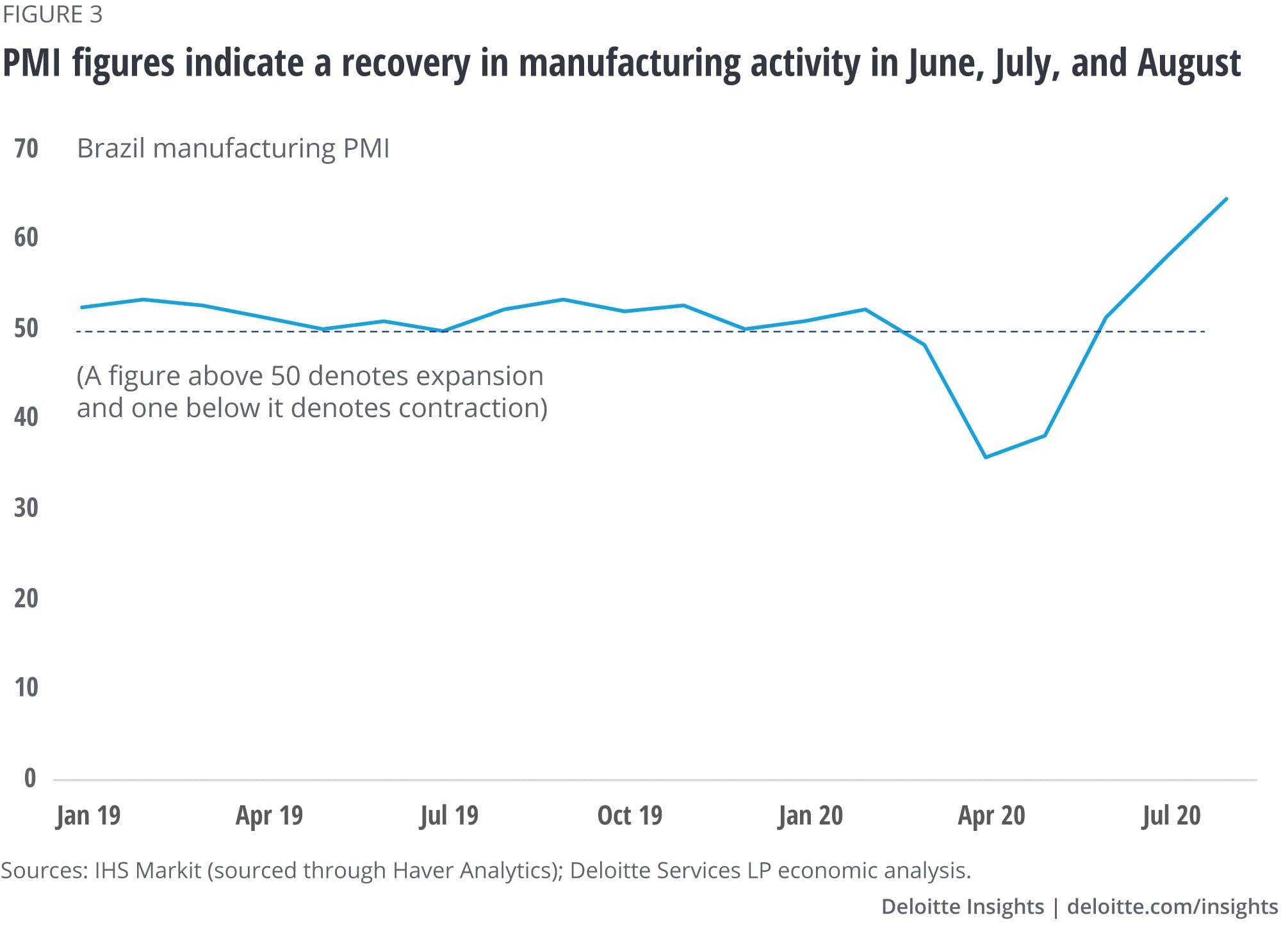 Consumers also appear to be increasing spending as the economy opens. The volume of retail sales, for example, has picked up since May with sales volumes in July higher than pre–COVID-19 levels. Trends in the volume of retail spending also show that consumers in Brazil—like in many other parts of the world—are raising spending on groceries and household items while cutting down on products they likely deem “nonessential,” such as clothing and footwear (figure 4). Despite the slight recovery in retail sales, consumer spending faces risks from a weak labor market. Employment fell by 11.5% between January and June with the unemployment rate (three-month moving average) rising to 13.3% from 11.2% during this period. This, along with expectations of weak economic activity, will continue to weigh on consumer confidence10 and, hence, spending. 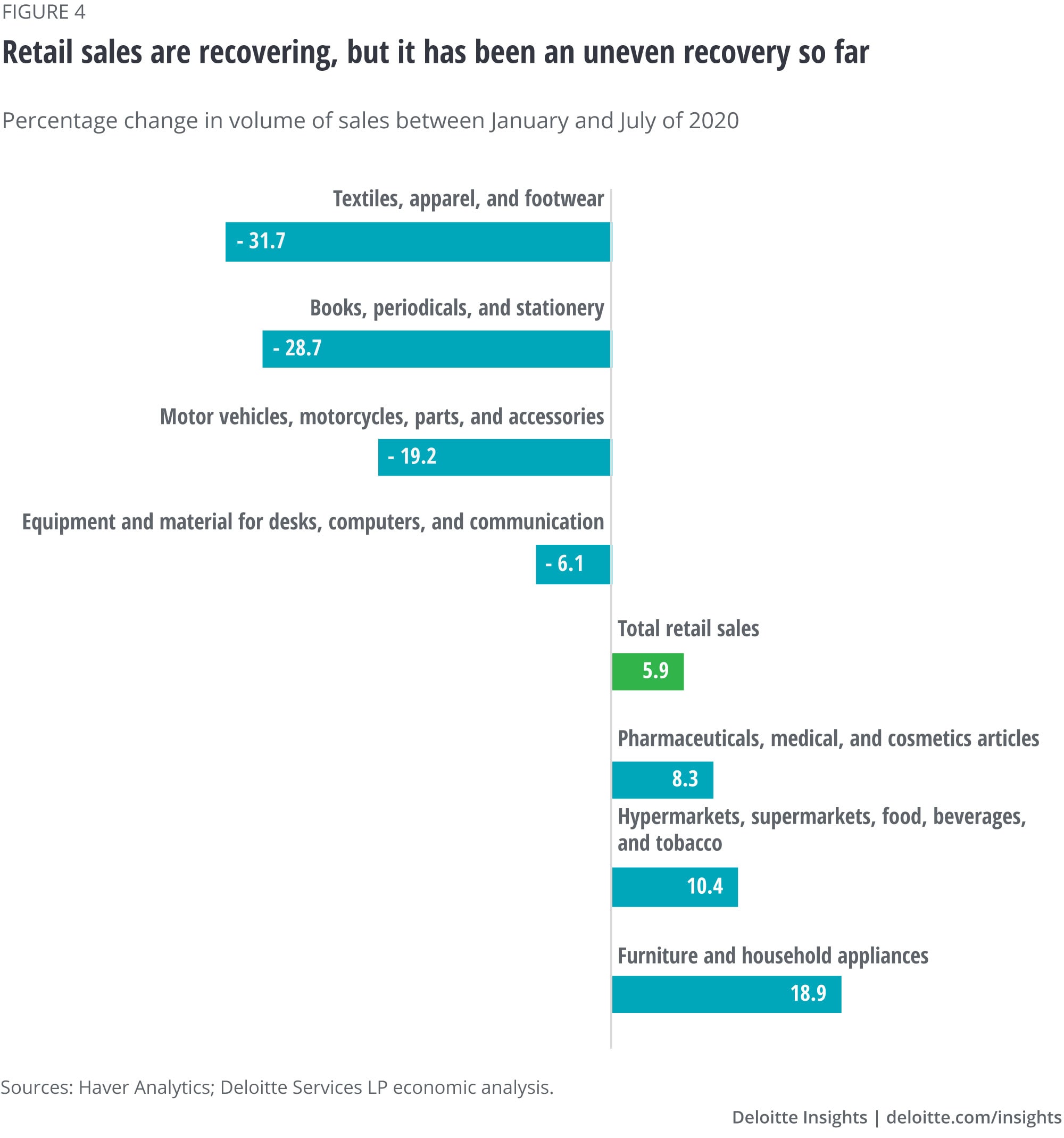 Strong fiscal stimulus has helped, but may lead to worries in the medium term

The fiscal response to the crisis so far has been bold. Apart from releasing funds to tackle the pandemic, the government has also ensured fiscal support for households and businesses (including small firms), and aid to states and municipalities (figure 5). The total fiscal measures add up to about 12% of GDP.11 Yet, the strong fiscal stimulus is not without risks. While these measures have helped support the economy in the near term, the sheer size of the stimulus will likely lead to deterioration of the government’s balance sheet in the medium term. For example, between the first and second quarters of this year, the central government’s budget deficit widened sharply to 27.5% of GDP from 6.2% as stimulus measures took effect. And as borrowing surged to fund the stimulus, government debt went up—gross general government debt surged to 85% of GDP in July from 75.9% in January. This rise in debt and deficit levels amid economic uncertainty is expected to make a return to fiscal prudence more challenging for the government. Over the next year, as investors’ focus likely returns to fiscal health, any movement in bond yields will depend on how the government handles its finances and its ability to drive more reforms.

It’s not just the fiscal side supporting the economy. Monetary policy, too, has been accommodative, focusing more on easing the cost of borrowing and ensuring liquidity. Banco Central do Brasil (BCB) has cut its key policy rate by a total of 225 basis points since February and has expanded its balance sheet with liabilities in June up by 13.9% from February. With inflation within its target range, the BCB is likely to go for further cuts later this year to stimulate the economy. 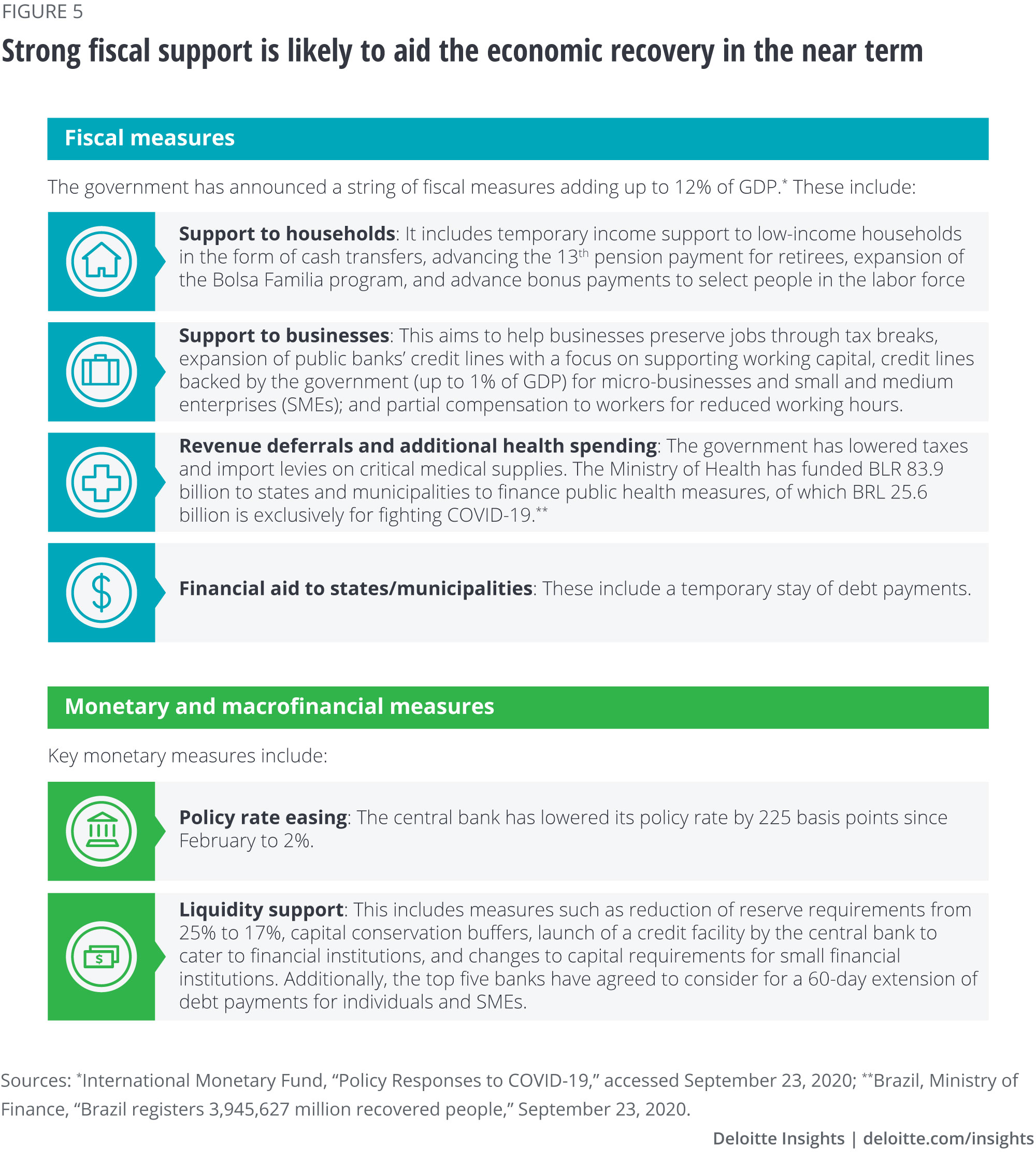 The speed and nature of the economic recovery will depend much on the course of the pandemic in Brazil and in the rest of the world. While new cases of the virus have been slowly going down in Brazil from its peak in July, the incidence of cases is still high.12 As of writing this article, there is still no known vaccine or cure, although there are many vaccine candidates undergoing trials in different parts of the globe.13 And even if a vaccine is discovered by late 2020 or early 2021, ensuring production and supply will depend on supply chains spread across the globe, competition with other countries for supplies, and the logistics of delivering these vaccines to the population.14

The author would like to thank Monali Samaddar from the Economics team for her research contributions for this article.