Brazil’s economy contracted in Q1 2019. While fiscal stimulus is ruled out due to the poor health of public finances, there is not much monetary policy can do either. Reforms is likely the only way out.

Brazil’s economy slid back into contraction in the first quarter of this year.1 It is an ominous sign that economic conditions are still tenuous in a country that held much promise until less than a decade ago. The fortune of consumers in Brazil hasn’t changed much over the past year either, as they are in a low-growth environment with not much to show for earnings and employment growth. Naturally, in such a scenario characterized by weak demand, businesses have not filled the gap with higher capital spending, especially as there is still quite a bit of room to utilize excess capacity. The question then is, how can Brazil revive its economy?

It’s not an easy task for sure. Monetary policy is unlikely to play a major role in any sort of revival as interest rates have been low for a long time now and there isn’t much scope for large cuts due to rising inflation and the currency weakening this year. The current state of fiscal health and rules governing spending mean there isn’t much space to boost the economy through stimulus either. The answer, perhaps, lies in reforms.2 But that is a difficult path to tread, given the unpopular nature of reforms and the challenges in building coalitions in the legislature to pass contentious reforms such as those related to pensions and the labor market.3

Economy back in contraction in the first quarter

Brazil’s real GDP fell by 0.2 percent quarter on quarter in Q1 2019, marking a return to contraction again after two years and reversing from a 0.1 percent expansion in the previous quarter. The decline in GDP right at the start of the year does not augur well for an economy trying to shake off nearly five years of subdued economic activity, including two years of annual GDP contraction in 2015 and 2016, and just 1.1 percent annual growth in the subsequent years. In Q1 2019, key components of Brazil’s economy yet again failed to deliver. While exports and investments fell, growth in private consumption slowed for a second straight quarter.

Investment, which has suffered in recent years, was again in shaky territory in Q1, likely a reflection of weak demand and subdued business confidence in the economy. Gross fixed capital formation fell by 1.7 percent, the second straight quarterly contraction (figure 1). Pressure on consumers continues with private consumption growth slowing to 0.3 percent last quarter from 0.5 percent in Q4 2018. In such a scenario, a surge in external demand would have helped, but that was not to be. Exports declined by 1.9 percent, reversing from two previous quarters of expansion. And the economy would have fared worse had it not been for a rise in government consumption in Q1. 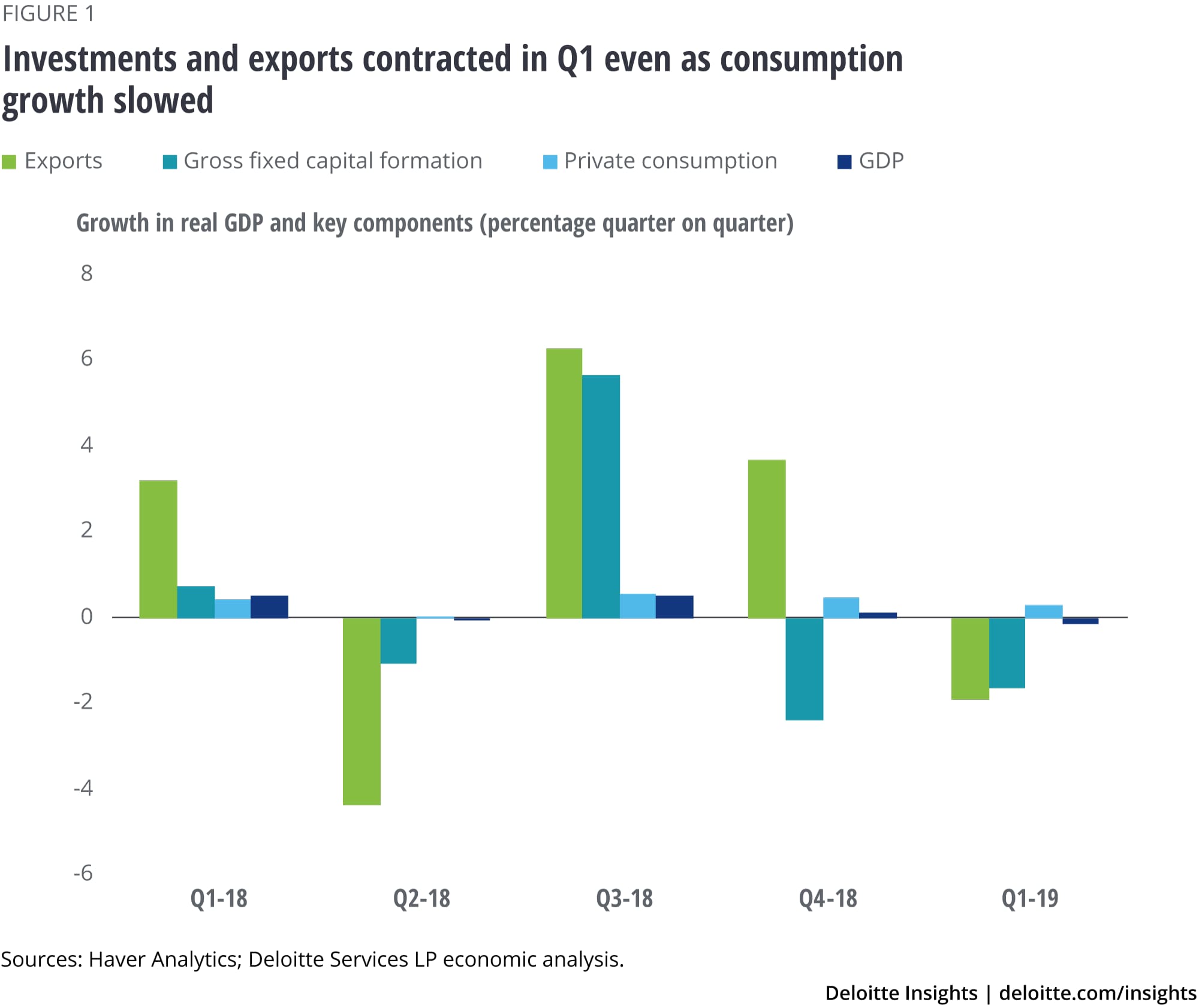 A strong revival in consumption is unlikely in the near term

In the absence of a strong labor market revival, consumer spending is not expected to pick up sharply in the near term. After declining for the last three quarters of 2018, unemployment has been edging up this year. The unemployment rate (three-month moving average) was 12.5 percent in April, much higher than the 6.2 percent low of December 2013.4 With the labor market still weak, real wage gains have been low.5 Real average earnings (three-month moving average) grew by just 0.6 percent last year. So far this year, growth in earnings has been muted at best—it fell to 0.6 percent year over year in April from 1.4 percent in March. Real earnings are likely facing pressures from rising inflation, which shot up to 5.1 percent in April.

With employment and earnings subdued, and economic prospects not brightening, consumer sentiment has been hit. Consumer confidence, as measured by the Getúlio Vargas Foundation, has fallen steadily this year (figure 2).6 The index last crossed 100 (a figure above this threshold indicates optimism among consumers) in December 2013, perhaps indicative of angst among consumers in an economy where GDP at the end of Q1 2019 was still 5.3 percent lower than five years ago. No wonder then, that consumers are not pushing up spending much. In March, for instance, real retail sales grew just 1.4 percent year over year, lower than the 1.6 percent rise in the previous month. 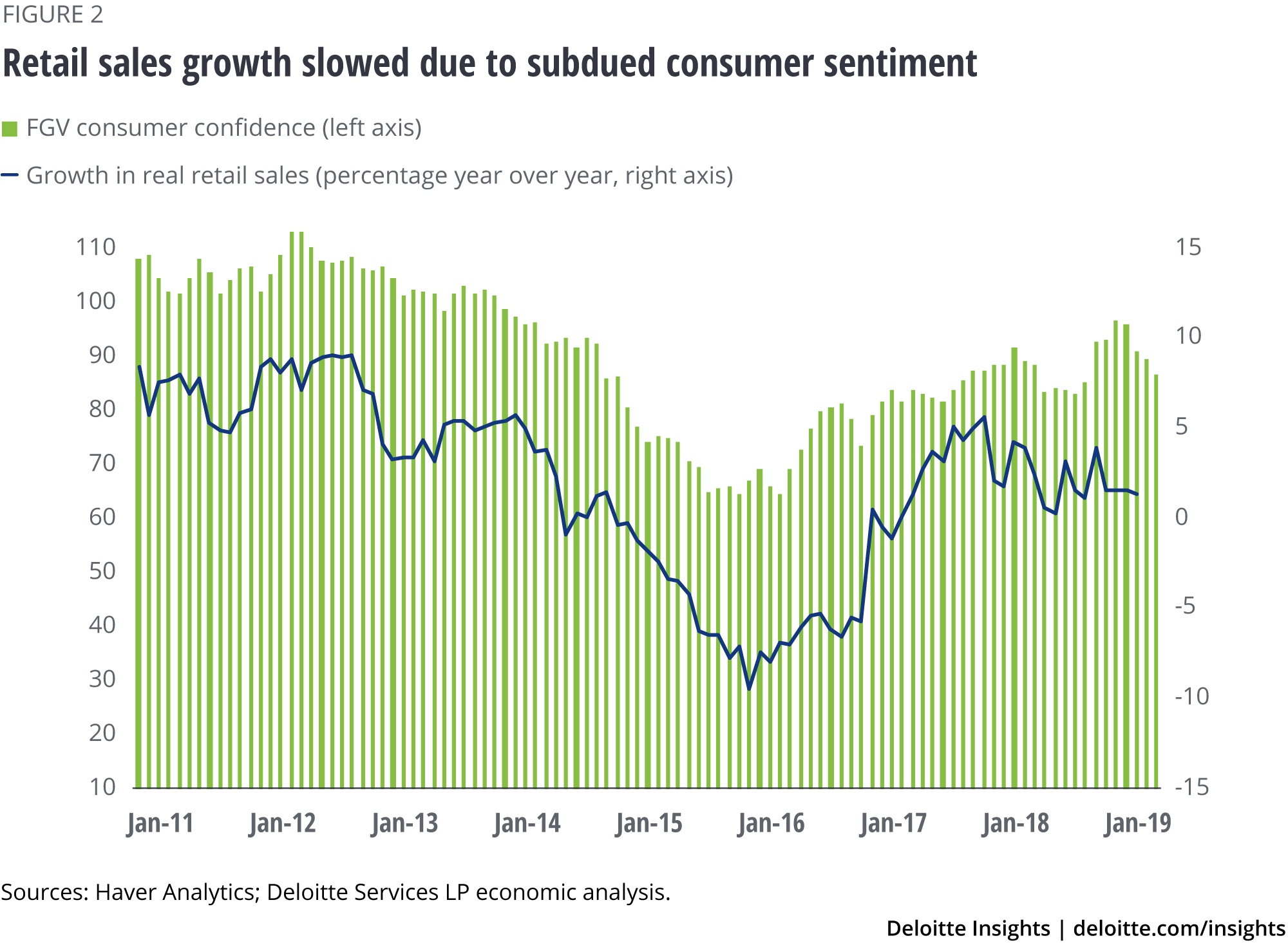 Low consumer demand is, in turn, weighing on production and investments. A quick look at value-added figures in national accounts data reveals that manufacturing contracted in Q1 and so did mineral extraction, thereby leading to a decline in overall industry.

After a brief foray into optimism between December 2017 and May 2018, manufacturing confidence has ebbed, falling further into the “pessimism” territory in May this year.7 Monthly indicators also point to the weakness in manufacturing with output falling by 2.2 percent year over year in March (figure 3). As a result, business confidence in the sector is subdued. It’s not only manufacturing that is seeing sentiment decline among businesses, but confidence in services too declined this year after a broad rising trend since September 2015.8

In the face of subdued confidence and slowing demand, businesses have been loath to invest. And given the existing capacity, business investment is not likely to spike anytime soon even if demand picks up in the near term. Capacity utilization in manufacturing, for example, was 78 percent in February, much lower than in the predownturn years (82.2 percent in 2012 and 82.5 percent in 2013). With investments weak, productivity has suffered, boding ill for long-term sustainable growth. Labor productivity, for example, has been on a broad downward trend since Q2 2013. 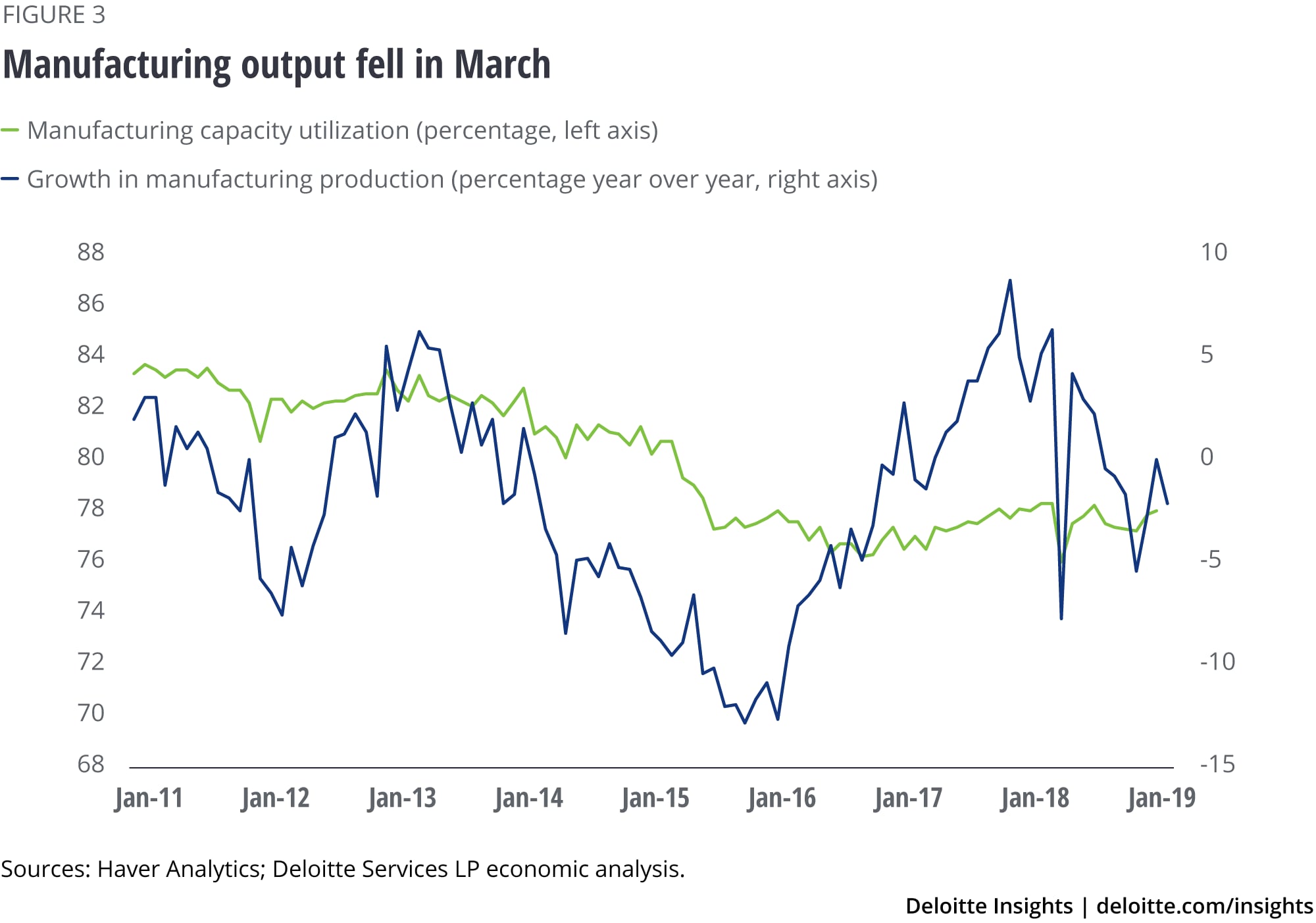 There’s not much the BCB can do

In such a scenario of low growth, the casual economic observer would expect the central bank to come to the rescue of the economy. The Banco Central do Brasil (BCB), however, is unlikely to intervene much given rising price pressures and a weakening currency. Between October 2016 and March 2018, the BCB cut its policy rate by a total of 775 basis points to revive the economy, but with limited success. Since then, the policy rate has remained unchanged at 6.5 percent. With inflation edging up, the BCB has limited maneuverability now to cut rates further. In April, headline inflation was 5.1 percent, edging toward the upper limit of BCB’s target range for 2019. And with the Brazilian currency real weakening against the US dollar again amid uncertainty over domestic and global economic growth, it is unlikely that the BCB will queer the pitch further by cutting rates by much. 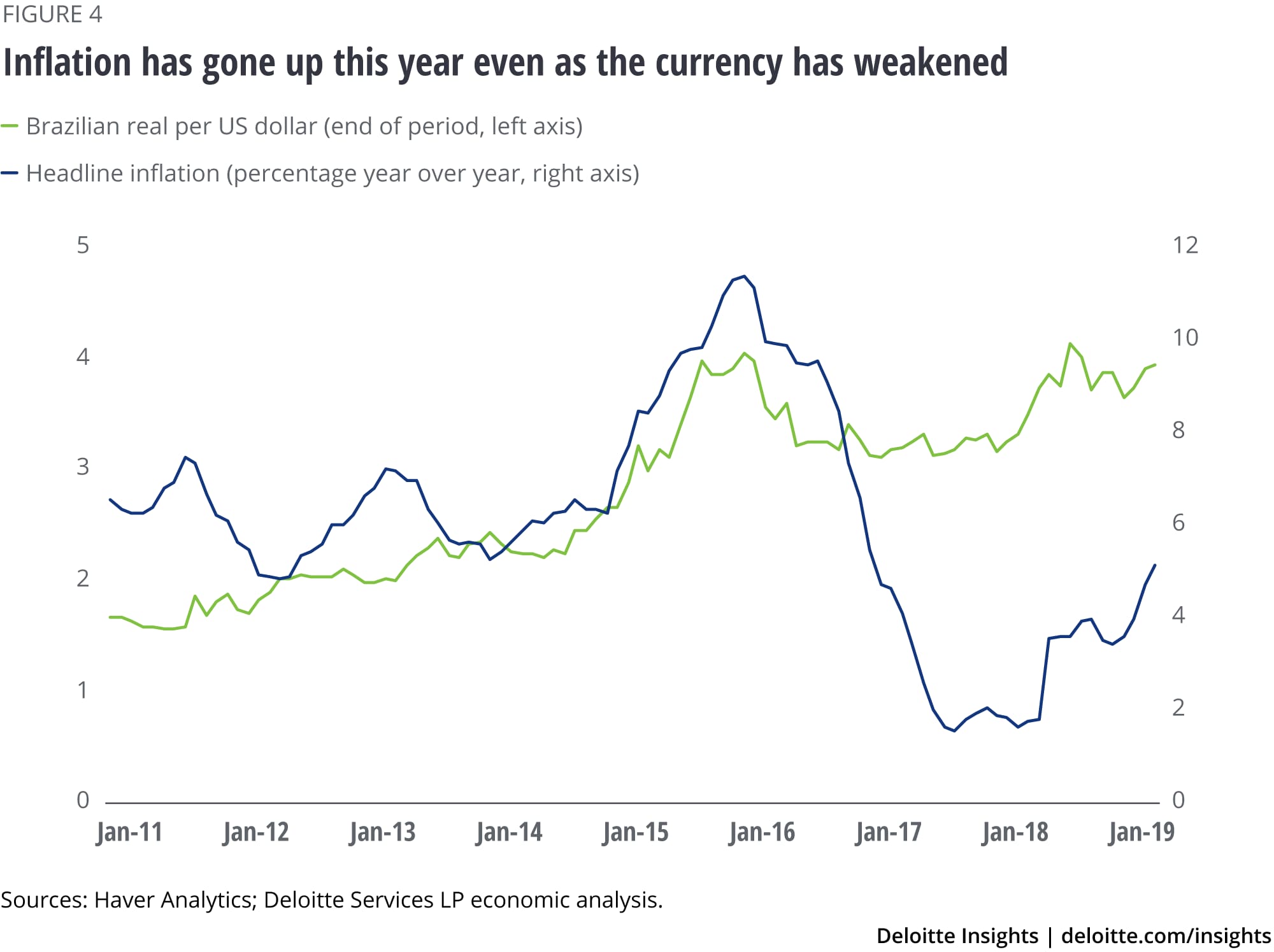 All eyes, then, are likely to be on the new government, including on its reforms agenda. Pushing through with tough reforms, especially in pensions and in the labor market, is likely to be an uphill task. These reforms are unpopular and it is difficult to build coalitions within the Brazilian legislature to pass such reforms, especially in the lower house where there are 30 parties.9 But till such time as this is done, the economy is not expected to pick up pace significantly. It is likely to remain in its current limbo—a far cry from its heydays of 2004–2010 when growth averaged 4.5 percent annually despite the Great Recession.