Australia Economy is a tale of two halves

Slowing global growth and a pick up in the pace of house price losses weighed on consumer spending and housing construction over the second half of 2018. Looking forward, a restrained household sector will continue to weigh on growth, but will be somewhat offset by increased government spending and exports growth.

2018 was a tale of two halves for Australia’s economy. The economy grew at an annualised rate of 3.8 per cent over the first six months of 2018, which is well above average, buoyed by strong contributions from the household sector and net exports.1 However, growth slowed significantly over the second half of the year, falling to an annualised rate of 0.9 per cent, the lowest rate since the second half of 2008, amid the global financial crisis.

Both the ongoing global slowdown2 and local factors have weighed on Australia’s growth. Domestically, the bad news has centred on an acceleration in house price losses, focused on Australia’s two largest markets of Sydney and Melbourne.3 Continued falls in the value of their largest asset have prompted households to be more cautious with their wallets, while also causing developers to think twice before beginning new construction projects. Combined, the slowdown in household consumption growth and the retreat of dwelling investment were responsible for about half the decline in economic growth between the first and second halves of last year.

But while Australia’s economic performance slowed over 2018, it was not all bad news.

As figure 1 shows, increased government spending on transport and other infrastructure across Australia’s fast-growing cities, as well as the ongoing rollout of a disability support programme (worth around 1 per cent of national income) is supporting growth.4 Additionally, we expect one-off factors (such as devastating drought conditions) that stifled net exports to recede, which, coupled with increasing production from a number of new LNG processing facilities, will support future export growth. 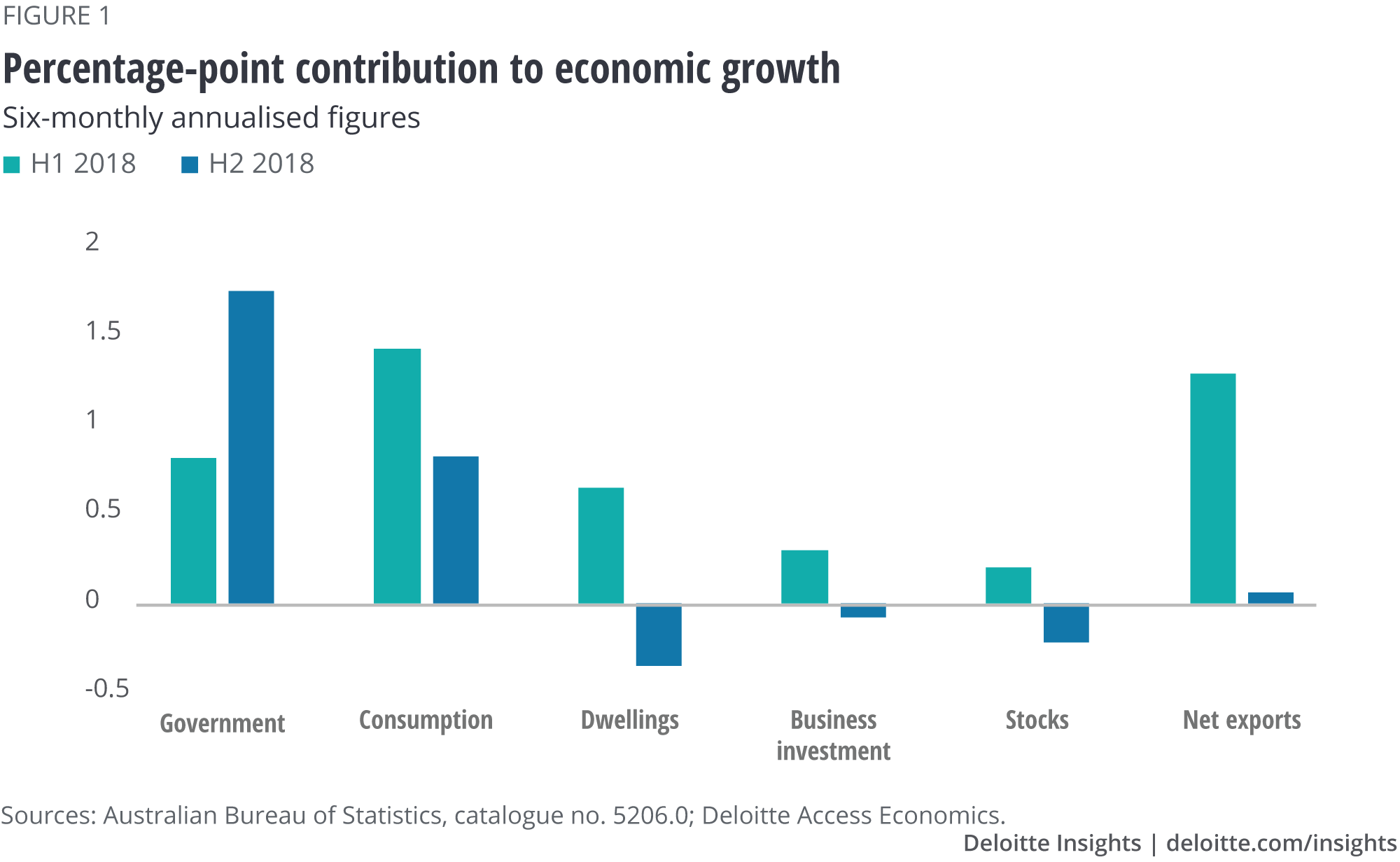 Looking forward, Australia’s economic outlook will continue to be shaped by a dichotomy in growth prospects. On the one hand, continued caution on the part of consumers from falling house prices and a retreat in dwelling investment will weigh on growth. On the other hand, increased government spending on infrastructure and services, resource exports, and the effect of increased tax cuts announced in this year’s federal budget will add to growth.5 Overall, these factors are expected to result in a below-average rate of economic growth of around 2.2 per cent over 2019, before growth accelerates back to average rates of around 2.75–3.0 per cent in the following years.6

The difference in prospects for different sectors of Australia’s economy is creating a new ‘two-speed’ economy in the country. The term ‘Australia’s two-speed economy’ gained currency during the mining boom of 2003–2013, reflecting the stark differences in economic conditions between the mining and nonmining states. This then reversed as the mining boom ended, and record-low interest rates prompted a surge in housing market activity centred on Sydney and Melbourne, causing jobs and people to follow. The unwinding of this housing market boom is creating a third iteration of the two-speed economy, with those differences most pronounced in the relative performance across industries as shown in figure 2. Industries that are exposed to the housing market downturn and associated slowdown in consumer spending are slowing, while others are riding on the coat-tails of rising government spending and longer-term demographic and technological change. 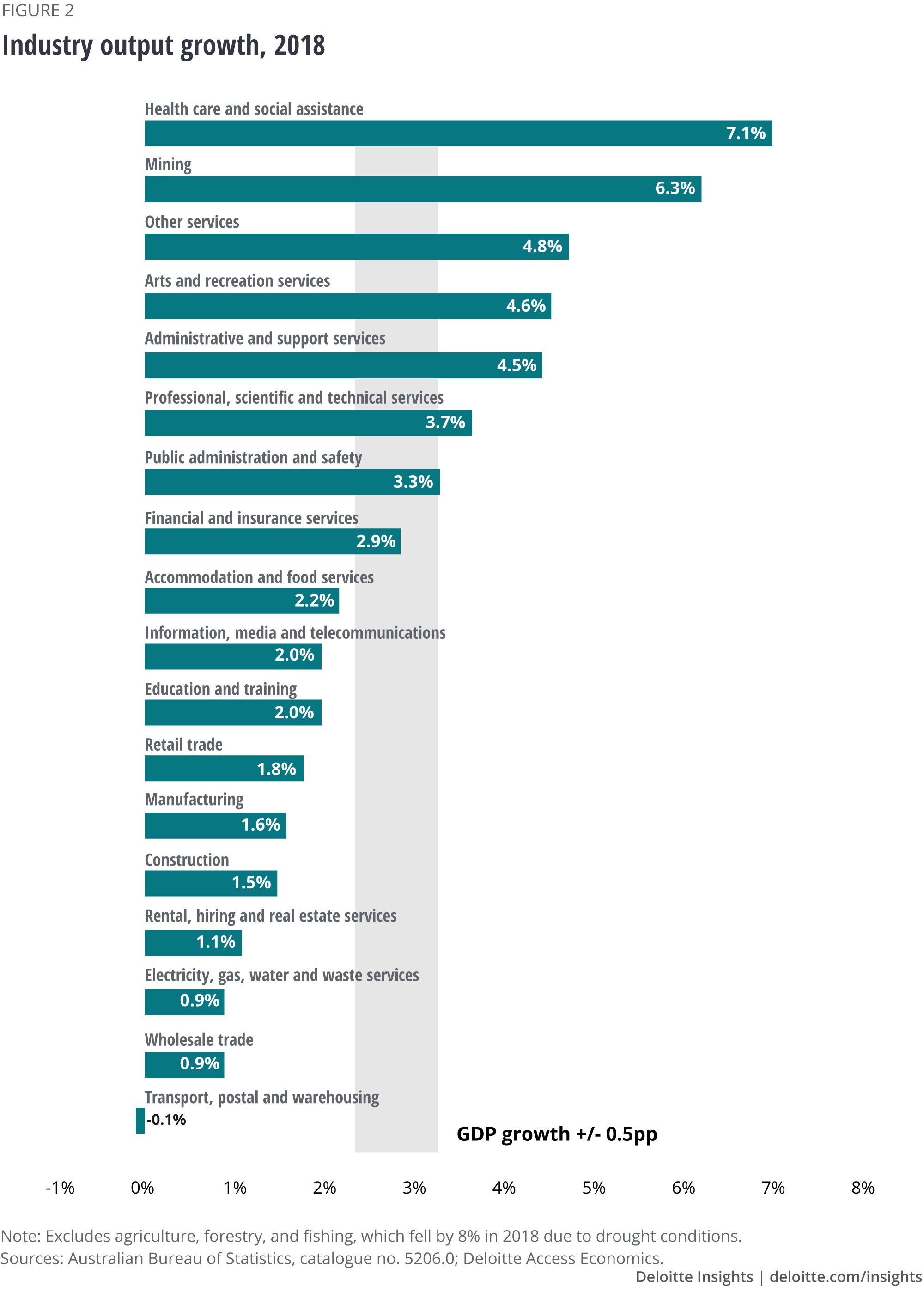 Health care and social assistance was the biggest winner in 2018, and is likely to remain a standout performer due to the ageing population and ongoing rollout of the aforementioned disability support programme. This has also supported the public administration sector, which is being buoyed by stronger government budgets at both federal and state levels.

The mining and resource sector has also outperformed the economy as a whole, with LNG production lifting and mining investment, after having plummeted since its huge peak in 2012, starting to rise again.

While infrastructure investment is strong, the broader construction sector is underperforming, with housing investment having peaked and now dragging on activity due to the broader downturn in the housing market. This slowdown is also weighing on growth in sectors that rely on household spending, such as retail trade, as well as the parts of wholesale trade and transport that are exposed to the retail sector. Property services are also feeling the brunt of the decline in housing market activity.

Depending on which sector you are in, you might either be finding the current economic environment very challenging, or be sailing along not understanding what people are complaining about—there is very little in the middle at present. Welcome to the new two-speed economy. Australian economy up, house prices down 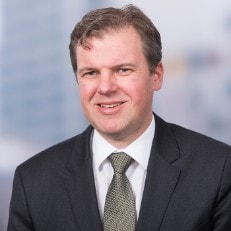