Growth is back in the cards after a seemingly sluggish 2018. However, much depends on the outcome of ongoing trade conflicts, deleveraging efforts, and the central bank’s ability to inject some flexibility into the renminbi exchange rate regime without causing instability.

The consensus is that in 2019, China's economy, despite sizeable challenges such as trade tensions and the unfinished deleveraging campaign, will see its GDP grow at a respectable rate of around 6.2 percent. There are two main reasons for this. First, barring a severe correction in the housing markets of major cities, growth in domestic consumption will probably be close to the double digits. Second, even if there is a shortfall in exports due to trade tensions, this can easily be made up through a measured dose of fiscal stimulus, thus allowing domestic investment to make up for the shortfall in the external sector. The government has stepped up its efforts on the fiscal front already and in 2019 China will probably have a moderate current account deficit. But the side effects of underwriting an unrealistic economic growth target and the risky appeal of fiscal stimulus (which also comes from external parties) must not be underestimated.

China's economic deceleration, which started in Q2 2018, became more apparent in Q4. There are several reasons for this. First, the deleveraging campaign has greatly reduced access to bank lending. With much reduced access to credit, private enterprises have had to resort to other funding avenues such as stock-mortgage loans. But even here, because investor sentiment is low, private investors have been slow to come forward. One cause of this could be that recent government discussions on mixed ownership have only reinforced the idea that state-owned enterprises (SOEs) must stay big and strong, thereby fanning fears of quasi-nationalization.1 (However, the government has since made it clear that the key policy focus this year will be reassuring private enterprises and bolstering their confidence.2) Second, the housing market has seen significantly reduced transactions on the back of a slew of restrictive policies during the year. Third, the automotive sector, a bellwether industry in China, has encountered some serious difficulties in 2018 as auto sales saw their first-ever decline.

The end-of-year slowdown in the housing and auto sectors (figure 1) may well prompt policymakers to introduce a fiscal stimulus package simply to kickstart economic growth. Where the housing market is concerned, an easing of restrictive policies is clearly in the cards, despite official reiteration of the "homes are for shelter, not for speculation" line.3 This is because stagnation in the market is a far greater worry than worsening affordability for policymakers. But when it comes to the auto industry, whether the government will unveil more tax rebates there too really depends on the outcome of the next round of US-China trade talks. So far, Washington has continued to defer its plan to raise the tariff on $200 billion of Chinese imports to March 2, while China is going ahead with its rollback of tariffs on US cars and auto parts.4 In addition, China has stepped up the purchase of US soybeans and other agricultural products.5 Given these encouraging signs, it is conceivable that a truce may be on the cards in Q1 2019. Moreover, if the US equity market turns bearish owing to fears of a possible slowdown in China (think Apple's recent announcement6), President Trump might be more inclined to strike a deal with China. 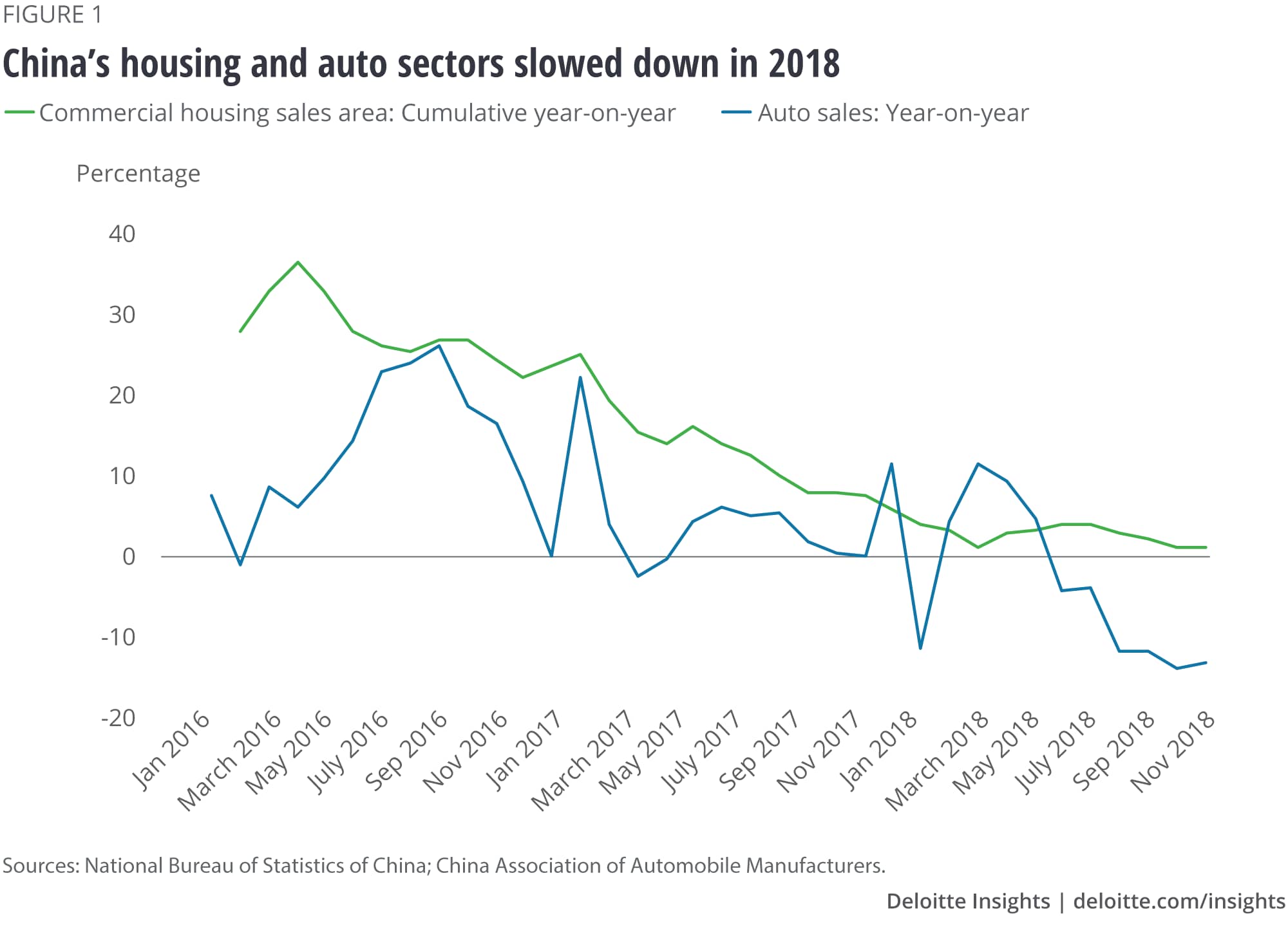 The real challenge for China is how it will manage trade tensions with the United States. There are both short-term issues (imbalances and market access) and long-term ones (the possible spill-over effect of China's industrial policies and alleged forced technology transfers), and the two need to be addressed separately. Short-term issues could be resolved through greater imports of US products and limited deregulation in certain sectors (such as financial services, health care, and auto). However, greater purchases of US imports may also result in trade friction with other trading partners. Therefore, in the short run, the best policy response for China is to slash import tariffs significantly. In the medium term, it must address the thorny issues of intellectual property rights (IPR) protection and the alleged forced technology transfers. But there are no easy answers to how this can be done because progress in IPR protection is hard to quantify. The challenge of measuring progress in terms of IPR protection, however, could be compensated by a faster pace of liberalization, especially by relaxing JV requirements in sectors where profits remain sturdy. The automotive and services sectors would be great places to start.

Where fiscal policy is concerned, a lower GDP growth target is one easy and efficient way to avoid worsening over-capacity and other spill-over effects of China's industrial policies. With the benefit of hindsight, one can see that China's massive fiscal stimulus package in 2008 did indeed save the world economy by boosting commodity prices and market sentiment,7 but China's rapid gains of market share in the manufacturing sector may also have fanned the fires of protectionism in the West.8 Therefore, if policymakers do feel compelled to rely on an expansionary fiscal policy to cushion external shocks, the emphasis should be more on social development (health care, education, and low-income housing) rather than on infrastructure.

In terms of monetary policy, even if the Fed turns less hawkish, China is likely to face greater constraints in 2019, which will have repercussions in the region. In the medium term, interest rate differentials between China and the United States will likely widen, which will again put more pressure on the renminbi. How China manages its currency exchange rate will be watched closely by global policymakers. If China wants to reflate the economy and yet wants to avoid a 2008-style fiscal stimulus, given the relatively benign inflationary outlook and the pullback of crude oil prices, Beijing could consider lowering the value of renminbi against the dollar (whose strength appears intact in 2019 so far).

Outlook for the renminbi and regional implications

So far in 2019, the renminbi has performed strongly, as a result of the ongoing trade talks. Even a temporary suspension of conflict would improve the rather subdued sentiment in China and the region, triggering equity rallies and bolstering battered regional currencies. Unfortunately, the renminbi exchange rate is often affected more by politics than by economics—the decision taken by Beijing to keep the currency stable during the Asian financial crisis (1997 to 2002) propelled China into a position of leadership in the region. As long as trade talks continue, Beijing will be likely to keep the renminbi exchange rate steady as a gesture of goodwill.

Meanwhile, the fact remains that despite the various mechanisms that enable the People’s Bank of China (PBOC) to have a managed floating exchange rate regime, policy biases have been increasingly favoring a stable renminbi exchange rate since the second half of 2018.9 Rightly or wrongly, an exchange rate of 7.0 RMB to the USD is being seen as a key psychological threshold10 in terms of confidence even though the PBOC’s reserves stood at $3.07 trillion at the end of 2018.11 This was why USD/CNY ended at 6.99 in 2016 amid mounting depreciation pressures. The real issue is whether a stable renminbi exchange rate would come at too high a price—that is, lead to sub-par growth or become a drag on corporate profitability. Our long-held view is that China does not need a major revaluation of the exchange rate in order to restore competitiveness. However, a slightly weaker renminbi will support the PBOC's accommodative monetary policy and reduce some of the pains of deleveraging.

Looking at the currency through the lens of the US-China trade conflict, the best-case scenario—to avoid trade tension escalation—would be for China to accept the 25 percent tariff on $50 billion of US exports (which was levied last year), as $50 billion only accounts 2 percent of China's total exports.12 However, depending on a successful outcome from the trade talks also implies that China has to keep the renminbi exchange rate relatively stable amid persistent downward pressure. The worst-case scenario is a continued impasse that will weigh heavily on both stock market sentiment and private investment. In addition, such a situation would make it increasingly difficult for Beijing to execute certain much-needed domestic reforms, such as relaxing JV requirements in certain sectors and increasing foreign ownership in the financial sector. In this case, it might be tempting for China to use a lower renminbi exchange rate to boost exports and loosen monetary condition. But China's trading partner may misunderstand the fact that the PBOC would like to keep monetary conditions loose simply for reasons of business cycle.

We foresee two cuts of reserve requirement rates in 2019. What if additional monetary easing is required? Interest rate cuts are clearly not an option. In theory, China could engineer a moderate revaluation of the renminbi in such a way that the expectation of depreciation could be met or even exceeded. In practice, however, it is almost impossible to know where to stop. To maintain a stable currency exchange rate while allowing interest rate differentials with the United States to widen will bring about distortions in the economy and increase the administrative cost of implementing capital controls.

Another factor affecting the renminbi outlook in 2019 is deleveraging. As this will be a multiyear project and can by no means be done in a painless manner, in the end the debt/GDP ratio has to come down through a combination of economic growth, inflation, and debt workout. Other countries’ experiences of debt reduction suggest that a slightly higher inflation will make this process less painful. A slightly higher inflation will imply a weaker exchange rate.

To sum up, China has many tools to stabilize the renminbi in 2019 and beyond, but the real question is at what cost. On balance, a slightly weaker renminbi will bring greater economic benefits than maintaining a stable exchange rate. This may worry the other economies in the region but if the renminbi exchange rate depreciates by 5 percent against the dollar in 2019, the impact on regional economies will certainly be manageable if China could avoid an abrupt revaluation. Unlike 1997, when emerging Asia was severely hit by drastic outflows of capital, most economies are in much stronger positions in terms of balance of payments and fiscal position. If Beijing can at the same time strike a balance between deleveraging and economic growth, a softer renminbi exchange rate, so long as it is not a significant revaluation as in 1994, will have little impact on regional economies.