The curious case of manufacturing capacity utilization: Why hasn’t it recovered from the Great Recession?

The curious case of manufacturing capacity utilization: Why hasn’t it recovered from the Great Recession? Behind the Numbers, June 2016

Manufacturing capacity utilization—an important measure of inflation—is yet to reach pre-recessionary levels. What does this mean for different industries, and for the economy as a whole?

Economists have been debating the performance of business investment during the current recovery. Much of the debate has centered around the relative importance of policy (such as regulation) and demand.1 Meanwhile, from a company’s perspective, it probably doesn’t make sense to invest when its existing plant and equipment are already underutilized—which seems to be the case for most US businesses. So maybe fancy explanations aren’t really necessary for the relatively weak investment spending by US companies.

Economic analysts may overlook capacity utilization (CU) for its more significant companion, industrial production. That’s been even truer lately, because CU’s main use has traditionally been to track potential inflationary pressures.

A casual observer of the US economy might therefore be forgiven for not knowing that manufacturing capacity utilization (MCU) has never fully recovered from the Great Recession. Between early 2005, when MCU fully recovered from the 2001 recession, to the end of 2007, when MCU started falling with the onset of the Great Recession, it was stable at around 79 percent. During the recession, MCU fell to a low of 64 percent, but had made a partial recovery by early 2012. Since then, it’s been stable at an average of about 75 percent. (See figure 1.)2 Low capacity utilization is a problem for most industries

MCU has declined in almost all industries (see figure 2), the notable exceptions being the aerospace and miscellaneous durable goods industries. The largest declines were in “other” manufacturing (mostly comprising newspaper, periodical, book, and directory publishing) and printing and related support. The largest declines in MCU, then, occurred in industries related to information. That’s perhaps not surprising given that these more traditional information methods are being replaced with Internet publishing. (Paper production, however, doesn’t seem to have been affected in the same way.) 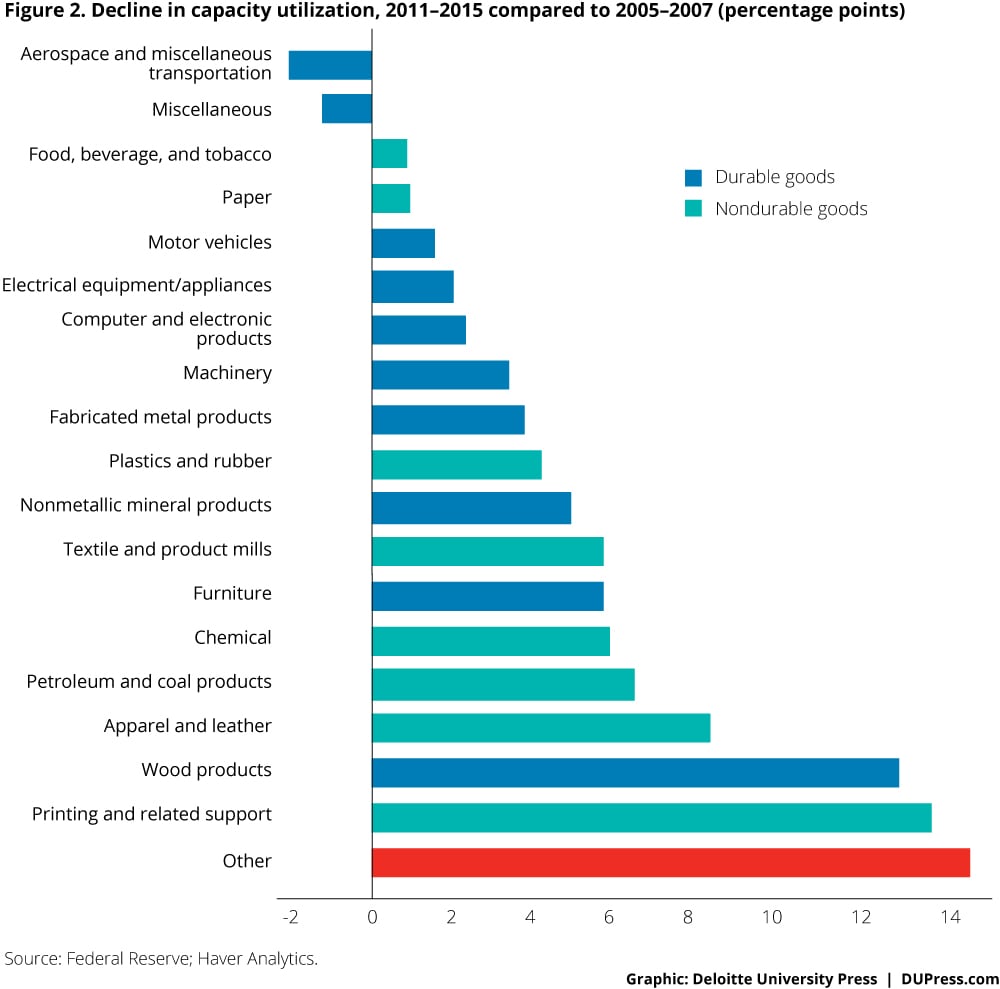 It’s also not surprising that wood products (heavily used in building) and furniture (dependent on home sales) remain below pre-recession MCU levels. These industries are both sensitive to home construction, which has not yet completely recovered.

What about petroleum and coal (mostly refining of crude petroleum)? With US crude petroleum production rising after 2011, it’s surprising that capacity utilization at refineries is down over 6 percent. And with chemical feedstock (natural gas) at low prices because of fracking, why would MCU in the chemical industry remain low?

Although many industries have simply stalled at the lower MCU rates, two industries are worth a further look. Figure 3 shows the evolution of motor vehicles and parts (NAICS 3361-3) and computers and electronic equipment (NAICS 334). Together these two categories account for about 15 percent of the manufacturing IP index. Both play an important role in the economy, but they tell very different stories. Although the average MCU for motor vehicles and parts has been lower in the current recovery, it has also been rising steadily. The most recent data show MCU for this industry above 80 percent, easily equal to the level in the mid-2000s. 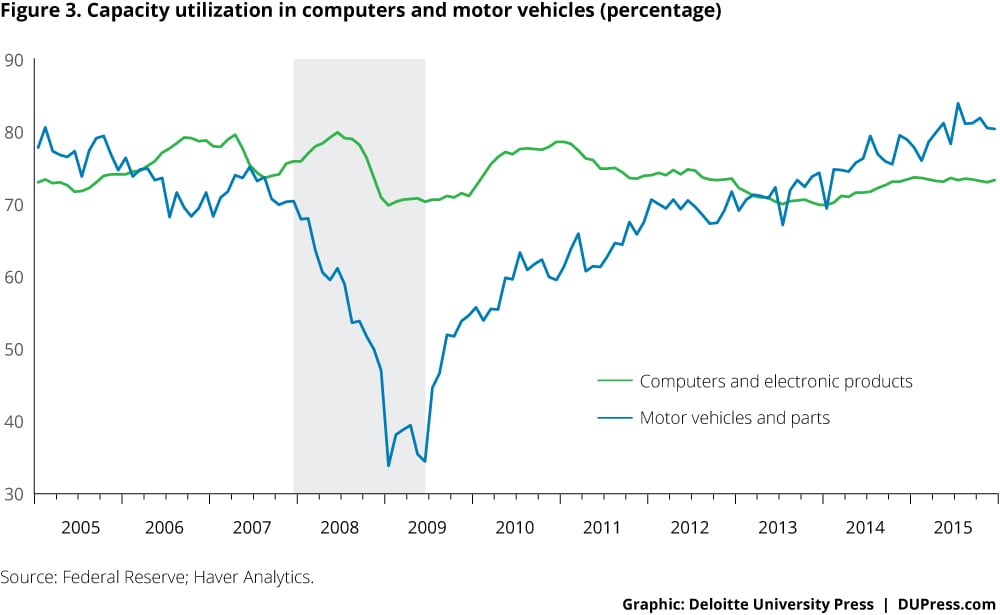 In contrast, MCU for computers and electronic products recovered immediately after the recession, but is now back down. The average level for the past year remains several percentage points below the mid-2000s level.

Motor vehicles, along with aerospace, is likely to start hitting bottlenecks if investment doesn’t pick up. Those industries are outliers, however. Most industries still have excess capacity—at least, compared to pre-recession levels.

Low manufacturing capacity utilization suggests there is little reason to be concerned about shortages, bottlenecks, and rising prices in most industries. That leads to two important points about the economy. First, risks of inflation are very low. If demand picks up, businesses have the capital to meet that demand, and may not be able to raise prices because of a shortage of productive capacity. Second, with overall capacity still below the pre-recession level, investment spending may remain soft—even if profits are high and the cost of capital is low.

The curious case of manufacturing capacity utilization: Why hasn’t it recovered from the Great Recession? has been saved

The curious case of manufacturing capacity utilization: Why hasn’t it recovered from the Great Recession? has been removed

An Article Titled The curious case of manufacturing capacity utilization: Why hasn’t it recovered from the Great Recession? already exists in Saved items