Matching strengths: A new wave of corporate alliances may be on the horizon

Matching strengths: A new wave of corporate alliances may be on the horizon Behind the Numbers, June 2017

​Amid signs of growth in the economy, it appears that a new round of mergers and acquisitions is just around the corner. Here we examine historical trends to determine what factors help cement successful corporate alliances.

WALL-E, Up, Ratatouille—these are some of the successful movies that Pixar and the legendary Walt Disney Animation Studios released after their merger in 2006. A match made in cartoon heaven, it is considered by some to be one of the most successful mergers of the mid-2000s. Disney leveraged Pixar’s computer-generated characters across its network, while Pixar gained Disney’s expertise in marketing and merchandizing its characters.

But not all corporate marriages are successful in matching different strengths. More than 60 percent of corporate alliances fail to create value; yet, the merger mania refuses to die.1 After all, they may provide an opportunity to acquire technology assets, expand and diversify products or services, increase economies of scale and value efficiency, and/or enlarge the customer base in existing as well as new geographic markets.

Mergers and acquisitions (M&A) in the United States came in waves in sync with economic growth and uncertainties associated with rapid globalization, changing demand, and rapid technology transformation. With economic activity picking up and the labor market tightening, US growth seems to be showing signs of "green shoots” lately, and it is likely that the next big M&A wave is here.

Figure 1 shows the number of nonfarm M&A deals announced each year in the United States.2 The wave in the 1990s was particularly remarkable because of the size of deals as well as the number of cross-border alliances relative to the previous decades.3 Between 1991 and 1998, the total number of nonfarm M&A deals jumped by 133 percent, with 1998 witnessing the highest number of deals ever made in the history of the United States.

Following the East-Asian crisis during 1997–98 and the dot-com bubble in 2001–02, the number of deals collapsed and remained relatively low until 2002, when takeover deals accelerated again at an aggressive pace, primarily driven by US companies. The years between 2002 and 2006 saw several mega-billion M&A deals, such as the one between Pixar and Disney. Before the onset of the global financial crisis, the number of deals peaked at 9,911 in 2007, worth $14.6 billion.

M&A activity slumped again following the financial crisis in 2008, only to revive at a moderate pace during the recovery. It was not until 2014 that the activity gathered steam; the number of deals surged to 9,303 in 2015, close to pre-crisis levels. After a momentary breather in the first three quarters of 2016, likely owing to uncertainty arising from the Brexit referendum and US elections, M&A activity revived in the fourth quarter. That made 2016 the second-best year in terms of M&A deals since the crisis. In value terms, total deal values crossed the trillion-dollar mark in 2014 and reached a historic high of $1.6 trillion in 2015.4 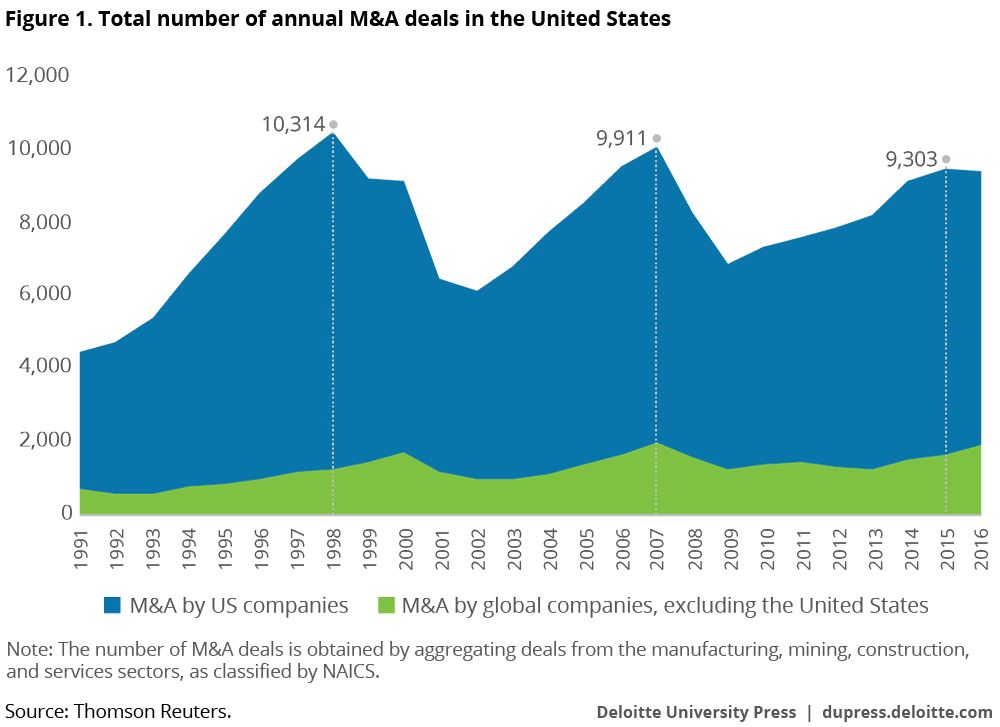 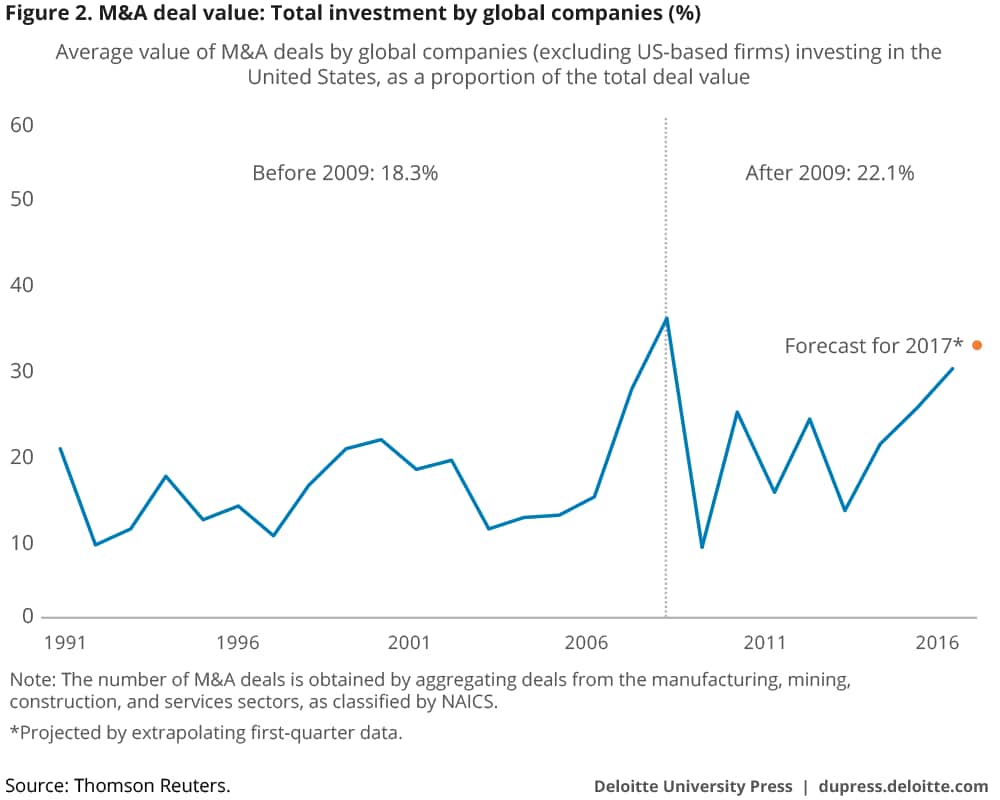 The wave of M&A activity since 2014 coincides with steady growth in the US economy. However, several other factors likely encouraged businesses to undertake M&A at an aggressive pace since 2014. Equity values of nonfinancial corporate businesses revived steadily and rose to pre-crisis levels in 2013. Historically, M&A activity has moved in tandem with equity prices and both are strongly influenced by business cycles and confidence in the economy (figure 3). Lending conditions eased somewhat between 2013 and 2015 and despite recent hikes, interest rates continue to remain near historic lows. In addition, corporate cash reserves have consistently increased over the past several years; many companies are holding on to a pile of cash without any capital investment plans. All these have helped enable businesses to strike more deals. 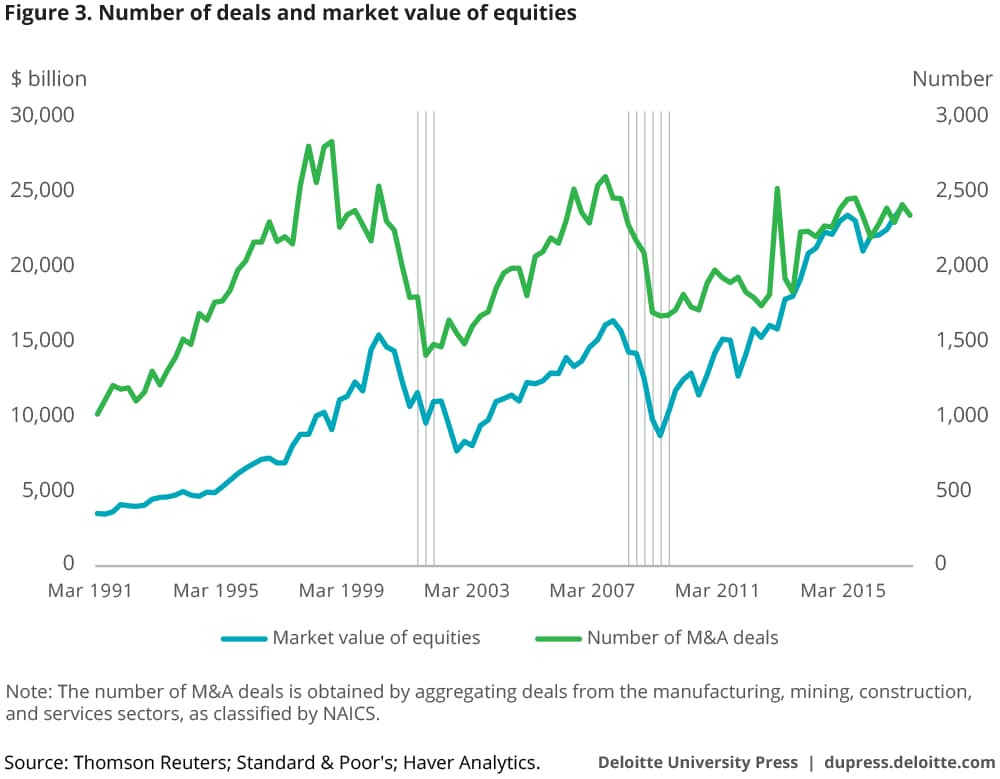 Consolidation through M&A was rampant across all sectors during this period. However, a majority of the activity took place in the US services sector, as has been the trend since 1991 (figure 4). This sector’s share in total number of deals has been rising. Since 2013, the sector has accounted for over 70 percent of total M&A deals.

Many major players are targeting tech companies to integrate strategic technologies into their offerings, adapt to changing customer behaviors, and position themselves for the future. In 2016, over 50 percent of the acquired technology firms/assets were scooped up by non-tech companies to help accelerate innovation and modernize their business processes. The banking and investment management services sector pursued the highest number of deals in acquiring tech companies in 2016 (58 percent of the non-tech buyers), followed by the travel and hospitality services sector (9 percent).5 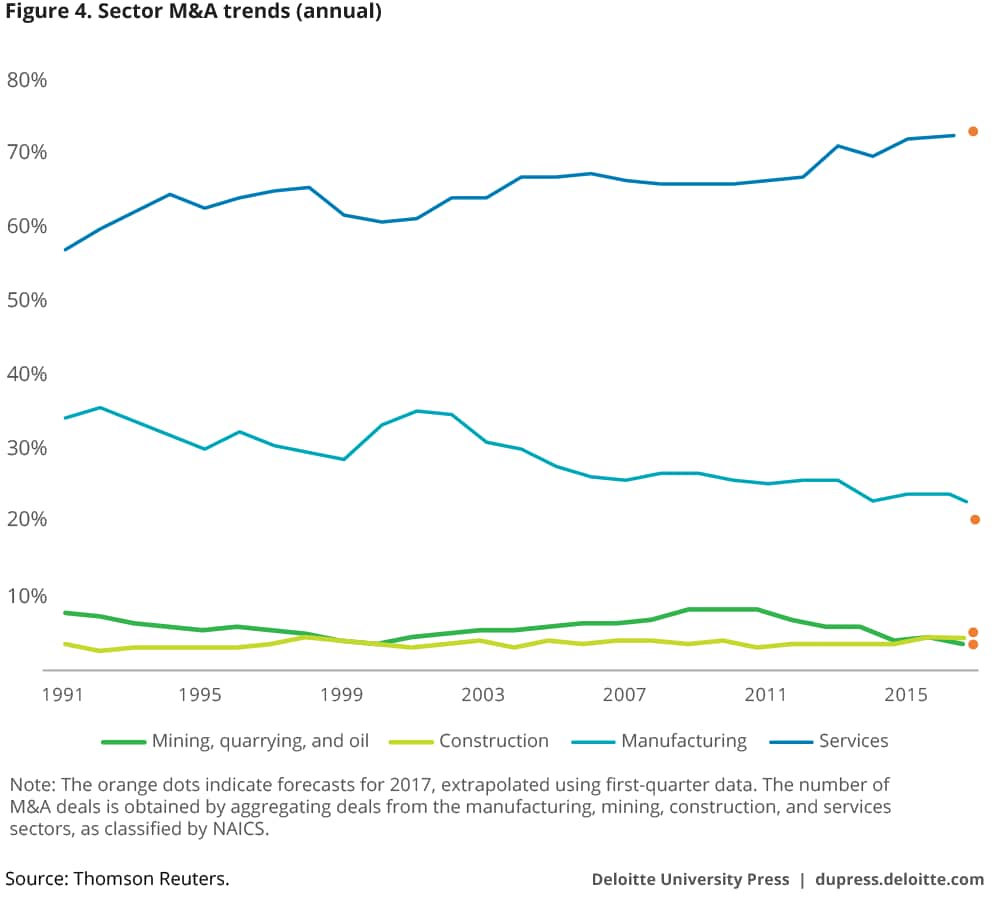 Deloitte’s 2016 M&A trends report indicates that optimism regarding M&A activity among US executives is high.6 Bankers and dealers expect deal volumes and size in the United States to increase over the next few years.7 Fiscal stimulus and tax reforms, as proposed by the new US government, might provide a further boost to M&A activity. In addition, corporate cash reserves are at historic levels and many companies are able to use their cash to strike more deals. Services will likely continue to attract most of the activity, with technology likely to become the biggest target for acquisition.

There are concerns that economic and policy uncertainties in the United States, together with risks emanating from the Chinese and European economies, may slow the deal flow. However, the changing technological landscape has increased uncertainty even in the near term, as industries are faced with technology disruption. In addition, the continued weakness in global demand has limited businesses’ organic growth prospects. Integrating and consolidating businesses through M&A may be a good way to survive.

Behind the Numbers , , Mergers & Acquisitions

Matching strengths: A new wave of corporate alliances may be on the horizon has been saved

Matching strengths: A new wave of corporate alliances may be on the horizon has been removed

An Article Titled Matching strengths: A new wave of corporate alliances may be on the horizon already exists in Saved items