Reshoring manufacturing jobs to the United States: Myth or reality?

Reshoring manufacturing jobs to the United States: Myth or reality? Behind the Numbers, May 2016

Early signs such as increased foreign direct investments and announcements by multinationals to design and manufacture products locally point to a renewed interest in reshoring manufacturing jobs to the United States. But is it too early to rule out the lure of lower labor costs and untapped consumer markets offered by emerging markets?

A few years back, some multinationals caught the attention of the media and the market when they announced they were reshoring—or bringing back—manufacturing jobs to the United States. Walmart announced its “Investing in American Jobs” program by promising to purchase an additional $50 billion worth of “Made in USA” products over the next decade. As claimed on the company’s website, the program expected to create a million new US jobs, including direct manufacturing job growth of approximately 250,000, and indirect job growth of 750,000 in the support and service sectors.1 Google Inc. made headlines in 2012 when it announced that its new Nexus Q music and video player will be manufactured in the United States, something not commonly observed in the consumer electronics industry.2 Ford's heavy-duty pickup trucks, which were built in Mexico, started rolling off an assembly line in Ohio in 2015.3

However, one of the most remarkable cases has been that of General Electric (GE), which decided to reshore some of its appliance manufacturing from China and Mexico to Louisville, Kentucky, in 2012.4 The products included high-quality refrigerators, water heaters, and washing machines. Four years later, in the beginning of 2016, GE decided to sell the same appliance unit that included the American-made products to a Chinese company—Haier—which wanted to boost its presence in the lucrative United States market.5

Anecdotal evidence such as these point to the growing competitiveness of the United States as a manufacturing location. This shift is further evidenced by the increase in foreign direct investment (FDI) in the country, particularly in the manufacturing industry, as foreign companies establish new operations or purchase existing US businesses. Haier’s acquisition of GE’s appliance business illustrates how a foreign company acquired an established US multinational to access the US market, brand, technologies, R&D capabilities, products, and supply chains.

The increase in FDI in the US manufacturing sector in recent years is noteworthy. This sector is the largest FDI beneficiary, accounting for over 60 percent of the total FDI inflows in the United States since 2010 (figure 1). Between 2011 and 2014, FDI in the form of equity inflows modestly improved in the sector, even though it fell at an aggregate industry level. 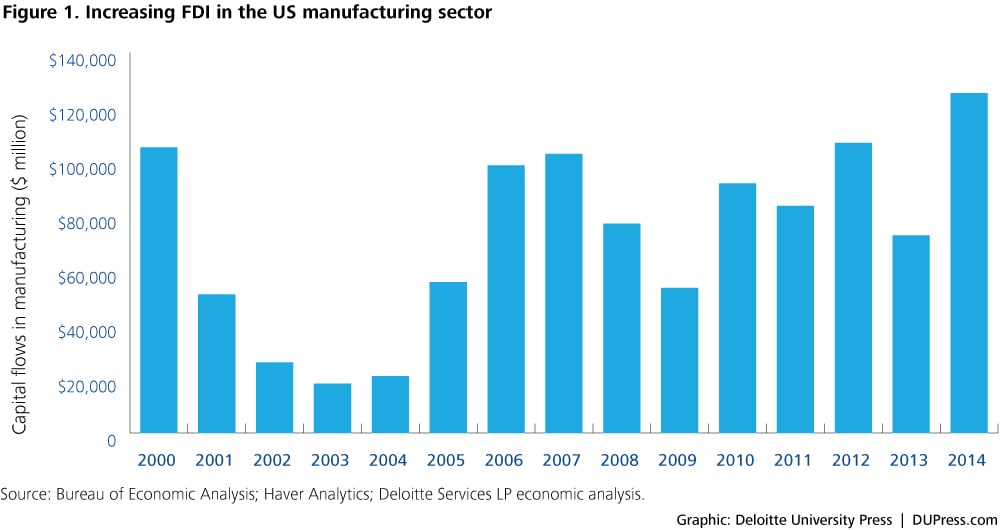 Several factors make the United States an attractive destination for manufacturing. According to Deloitte’s 2016 Global Manufacturing Competitiveness Index survey, the nation has constantly improved its manufacturing competitiveness ranking, moving from 4th position in 2010 to 3rd place in 2013 and finally to the 2nd spot this year. Moreover, executives participating in the survey expect the United States to assume the top position, overtaking China, before the end of this decade.6

According to the survey, the United States has demonstrated strengths across multiple drivers of manufacturing excellence. These are: 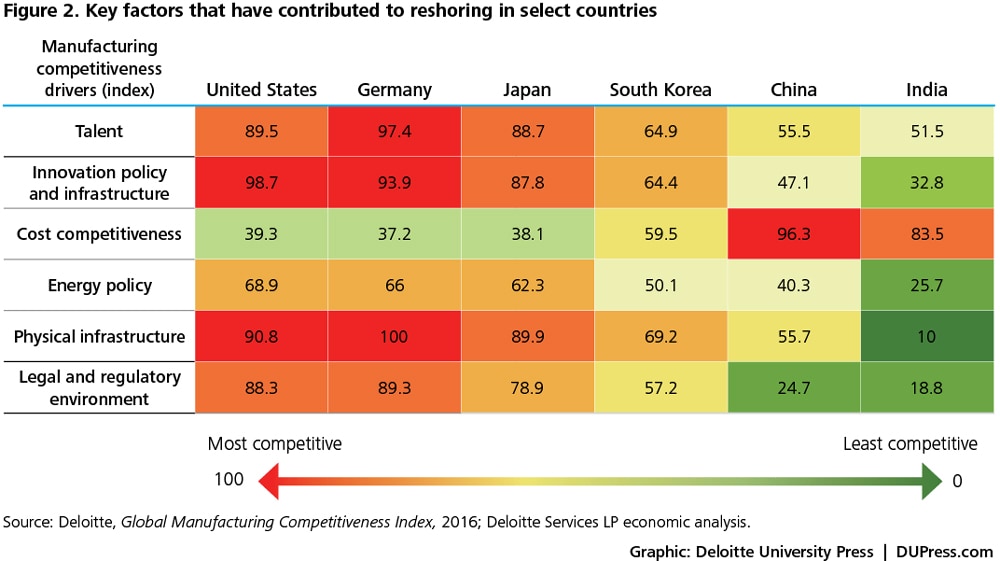 In addition, increasing offshore labor costs, rising shipping and warehouse costs, and low productivity are fast eroding the cost advantages that emerging countries once offered. Fast automation and sophisticated modes of manufacturing processes are rapidly replacing the need for labor, which implies that the labor cost competitiveness advantage in emerging markets may not be of relevance to multinationals in the long term.

However, several critics argue that it is too early to celebrate since much of what these multinationals had offshored over the past few decades continue to remain overseas. Emerging economies are still the most competitive in terms of manufacturing labor cost, primarily due to significantly lower labor rates (figure 3). Manufacturing labor costs per hour in India and China are one-tenth of those in the United States.

For multinationals manufacturing mass-produced, labor-intensive products such as shoes and apparel, factors such as low labor cost in emerging economies, continued dollar appreciation due to global uncertainties, volatility in oil prices, and successful negotiations on the proposed Trans-Pacific Partnership outweigh competitive advantages in the United States. In the face of rising costs in China, moving production to other, lower-cost countries, such as India or Vietnam, may be more beneficial than reshoring back to the United States. 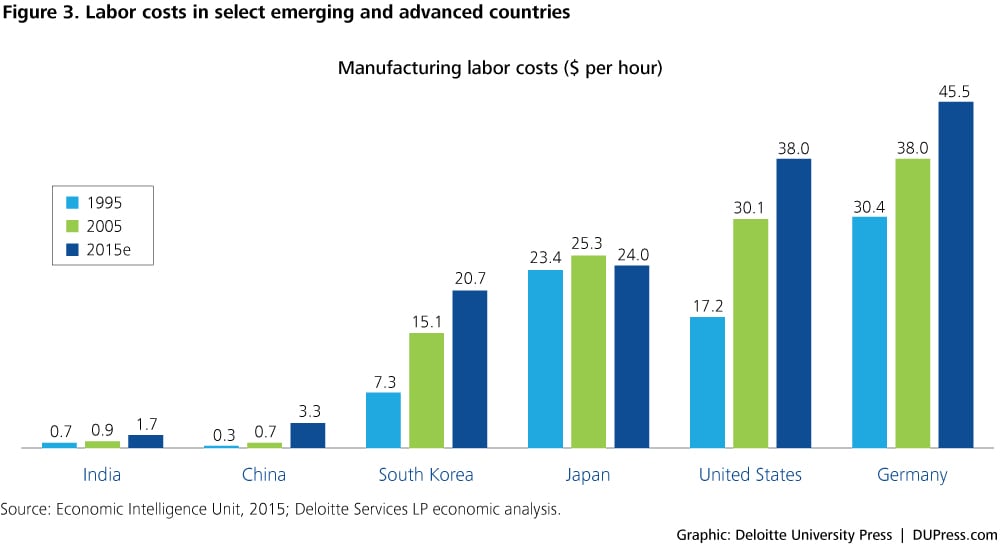 The other—and probably more strategic—reasons to continue production in emerging markets are close proximity to their booming middle-income class and the potential offered by a rapidly growing consumer base. For instance, many US manufacturers are now offshoring their manufacturing centers to India because not only do they have a cost advantage, they also get to serve a growing urban market, along with a huge but untapped rural potential market.

Increasing FDI and a few prominent reshoring moves by multinationals provide some indication of a shift in the competitive landscape of US manufacturing. However, more evidence is required before we can conclude that the manufacturing pendulum has swung back toward the United States. 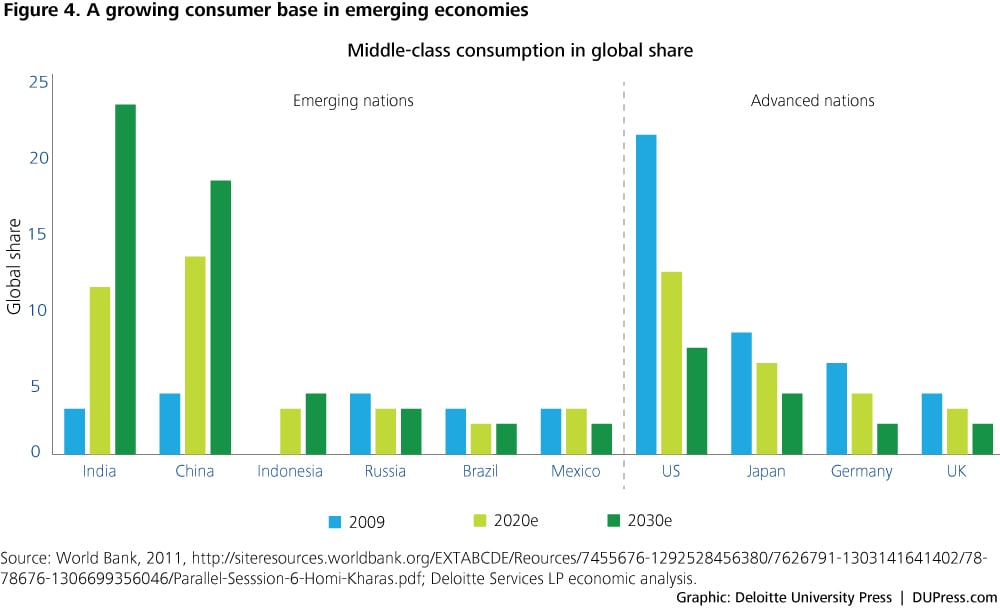 The authors would like to acknowledge the contributions of Dr. Patricia Buckley, director, and Dr. Daniel Bachman, senior manager, of the US economics team, Deloitte Services LP.

Reshoring manufacturing jobs to the United States: Myth or reality? has been saved

Reshoring manufacturing jobs to the United States: Myth or reality? has been removed