Despite the uncertainty about the future of the Eurozone and political risks, the region’s economy appears to be in good shape, bolstered by rising corporate investments and consumer spending, and a recovery in the labor market. However, risks, arising from rising protectionism and post-electoral uncertainty in Germany and Italy, remain.

It has been a while since the Eurozone was in as good economic shape as it is today. To be precise, it was more than a decade ago, back in 2007, when the Eurozone achieved a growth rate higher than last year’s 2.5 percent. Given the focus on political risks in early 2017 and the gloomy predictions about the future of the Eurozone, this growth is a remarkable achievement.

Political risks have receded; however, they have not yet disappeared, and new risks are emerging. The political situation in Italy after the elections is complicated; whether and how a new government can be formed is very unclear. Germany, on the other hand, needed half a year to form a new government, a new record for German standards by far. Apart from these electoral events, the biggest threat for the Eurozone’s export-oriented economies are new protectionist trends in world trade.

Drivers of the recovery

The Eurozone’s recovery has been ongoing since 2014, but, so far, it had lacked dynamism. The recent acceleration is based on a recovering labor market with corresponding increases in consumer spending, helped by the synchronized upswing of the world economy.

However, another major cause was rebounding corporate investments (figure 1). Corporate investments are indispensable for a sustainable, and particularly for a self-sustaining, recovery. Since the financial crisis, investments have been the Achilles’ heel of the Eurozone’s economy, with the subsequent recession resulting in a much longer-than-usual period of low investment activity. Consequently, economic recovery remained subdued. Since then, the much higher investment activity has been driven by factors such as tight capacities and low interest rates, and reflects a change in business sentiment. This is a strong sign of economic normalization, even though it took exceptionally long. 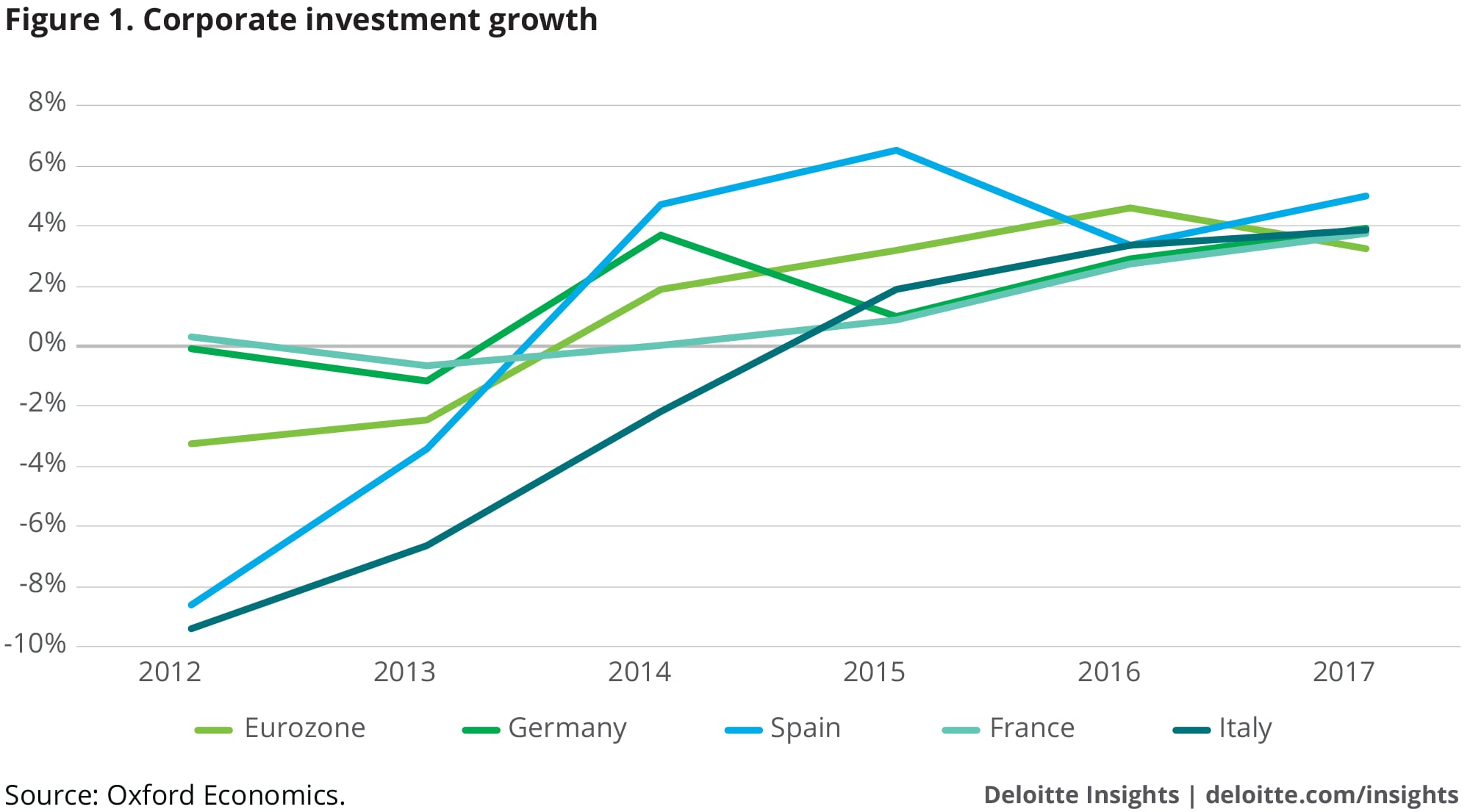 The Eurozone has grown substantially above its potential growth rate, which lies between 1.0 percent and 1.5 percent. At the same time, the labor market continues to improve: In the summer of 2017, employment was even higher than before the financial crisis, and in autumn, employment reached a new record high.1 The resulting increase in consumer demand is a key driver for the recovery.

Early indicators such as the EU Commissions’ Economic Sentiment Index and Purchasing Managers’ Index decreased slightly in the first few months of 2018, but they are still very close to their long-term highs.2 At the same time, inflation remains low (1.1 percent in February) and far away from the European Central Bank’s (ECB’s) target of “close [to], but below, 2.0 percent.”3

Among the big four Eurozone economies, Spain again grew the fastest (at 3.0 percent); Germany (2.5 percent) grew at the same speed as the Eurozone as a whole; France, somewhat slower (2.0 percent); and Italy grew at 1.5 percent (figure 2). Nevertheless, the recovery in France and Italy accelerated significantly. The only headwind for the recovery came from a stronger euro, but the general rise in world trade has compensated for the euro’s appreciation. 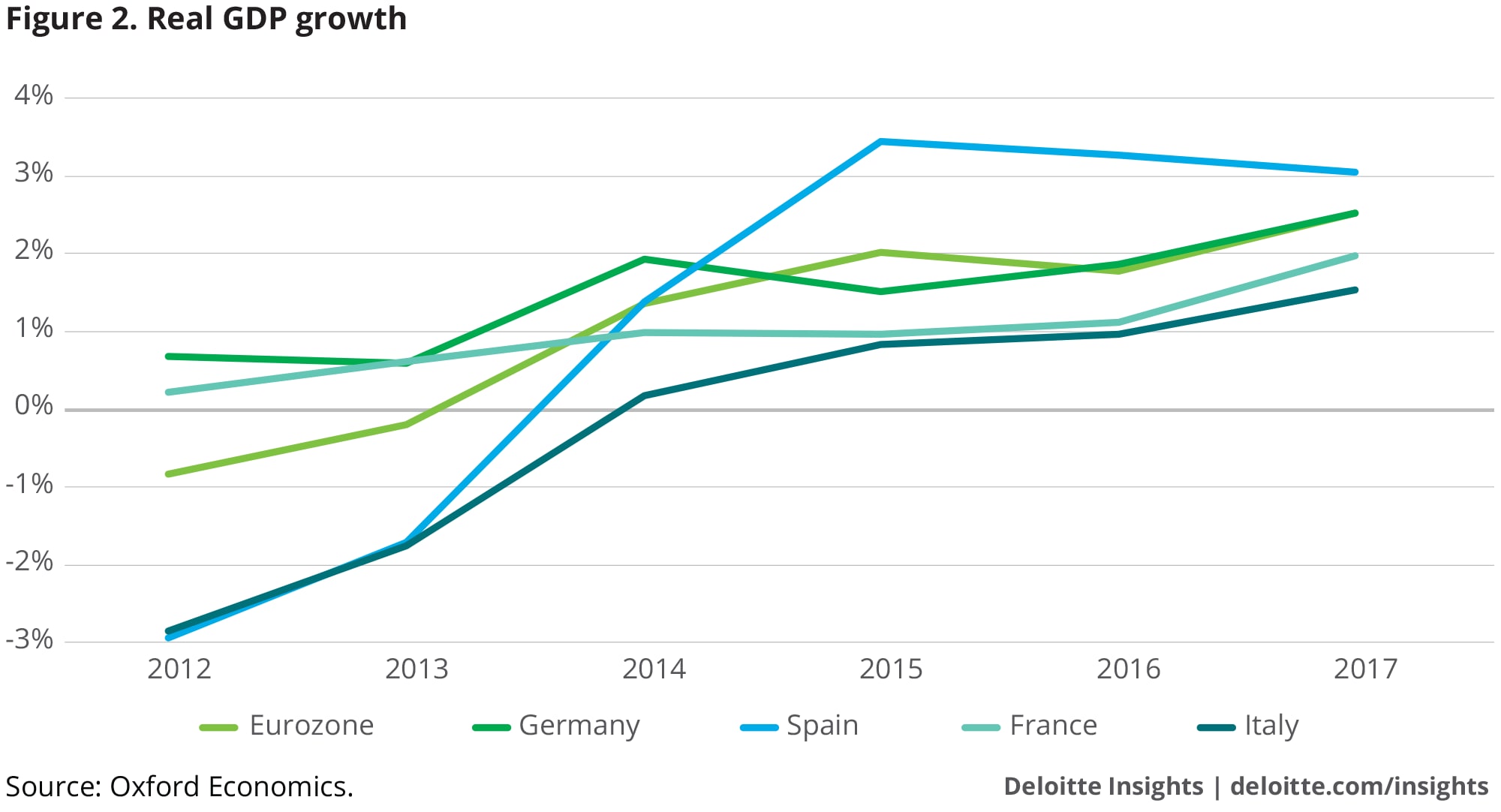 Germany, as the Eurozone’s biggest economy, is a key driver of the development. It grew at 2.5 percent in 2017, which is the strongest growth since 2011. This indicates that the country is fast approaching a boom phase, if it has not already entered it. The number of employees and capacity utilization regularly reach new record levels; wages keep increasing; and the real estate markets in the biggest cities, especially Munich and Berlin, have been climbing to heights never seen before.

Indeed, Germany has been growing above its potential growth rate since 2014, which fuels discussions about an overheating economy. Some indicators, such as the development of the real estate markets, point in this direction. However, while real estate markets are certainly driven by the low interest rate environment, other key drivers are more fundamental, including rising demand for housing, thanks to labor markets and migration to the cities. Nevertheless, low inflation, as well as the significant, though still moderate, wage increases speak against an overheating of the economy.

Germany’s new grand coalition between the conservative Christian Democratic Union and the Social Democratic Party (SPD) was born out of not love but necessity. Initially, the SPD ruled out the possibility of joining another grand coalition after achieving their worst election result of the post-war era. However, it remained the only viable combination once the coalition talks between the Conservatives, Greens, and Liberals broke down last autumn. The process to reverse that decision was supported by the SPD member vote, which is another reason for the prolonged government formation for almost half a year. During the coalition talks, labor law and health care policy were the main dividing issues between the parties involved. In the end, the SDP managed to take control over key ministries, such as foreign affairs, finance, and labor.

The government’s agenda for the next four years focuses on continuity, with some new areas. There will be a soft cap on immigration and an array of social policy measures, fed by the current budget surplus, which amounted to €37 billion last year. These policy measures include tax breaks for low- and middle-income households, increased support for families with children, and more investment in social housing construction. There are also plans to increase spending on public infrastructure and invest in broadband expansion. The new coalition also indicated its willingness to contribute more to the EU household.

In early March, Italy voted for a new parliament. While it was unlikely from the beginning that the elections would deliver a clear winner, the results make any coalition-building even harder than expected. Italian voters massively turned their back on the two mainstream, moderate parties: the center-left Democratic Party, which is the main partner in the current government coalition, and the center-right Forza Italia party. Instead, they favored two populist and anti-EU parties, the Northern League and the Five Star Movement, which campaigned for substantial tax cuts and widespread increases in public spending. Those results eliminate the option of a centrist coalition between the Democratic Party and Forza Italia and offer no easy or quick solution to achieve a majority in any of the parliament’s two chambers.

Nevertheless, financial markets have been relatively unimpressed by this outcome. The spread between Italian and German government bonds has barely reacted to the political results and is currently even lower than at the end of 2017. The ECB’s continuing quantitative easing scheme might play a role here as well, as the average duration of the public debt is quite long.

From a cyclical perspective, the recovery is intact and robust. Risks to the Eurozone’s economy come mainly from international politics. The trend toward protectionism and declining political support for an open and multilateral trade system are an obvious threat to the export-oriented European economies. If tensions escalate and result in a trade war, Europe’s growth will be endangered—and thus the growth of the world economy as a whole.

Eurozone: As good as it gets? has been saved

Eurozone: As good as it gets? has been removed

An Article Titled Eurozone: As good as it gets? already exists in Saved items