Behind the scenes of a slowing eurozone economy, two diverging forces become apparent. While domestic demand and services sectors are well supported by thriving labor markets, industrial sectors—usually the engine of the eurozone economy—suffer from external headwinds.

Growth dynamics in the eurozone have receded substantially in the last few quarters, indicating that the region has likely passed the peak of the current recovery. This could mainly be due to a weakness in the industrial sector, which suffers from external headwinds. Nonetheless, the services sector and domestic demand are the key drivers of growth.

Economic situation: Beyond the peak

The eurozone economy has been in an economic downturn since mid-2018 (figure 1), following the boom phase of the recovery that began in 2016. In line with this shift, most forecasters have lowered the projected growth rates for the eurozone. The European Central Bank now expects a growth rate of 1.1 percent for 2019,1 while the estimate of the European Commission is slightly higher at 1.2 percent.2 Among the big eurozone economies, Spain continues to be in the lead. It grew 0.6 percent in the last quarter of 2018. Growth in France was lower, but still positive, while it stagnated in Germany and contracted in Italy. Italy is technically considered in a recession following contractions in two consecutive quarters.3 Recent preliminary flash estimates point to a stabilization of growth rates for the eurozone in the first quarter of 2019 (figure 2).4 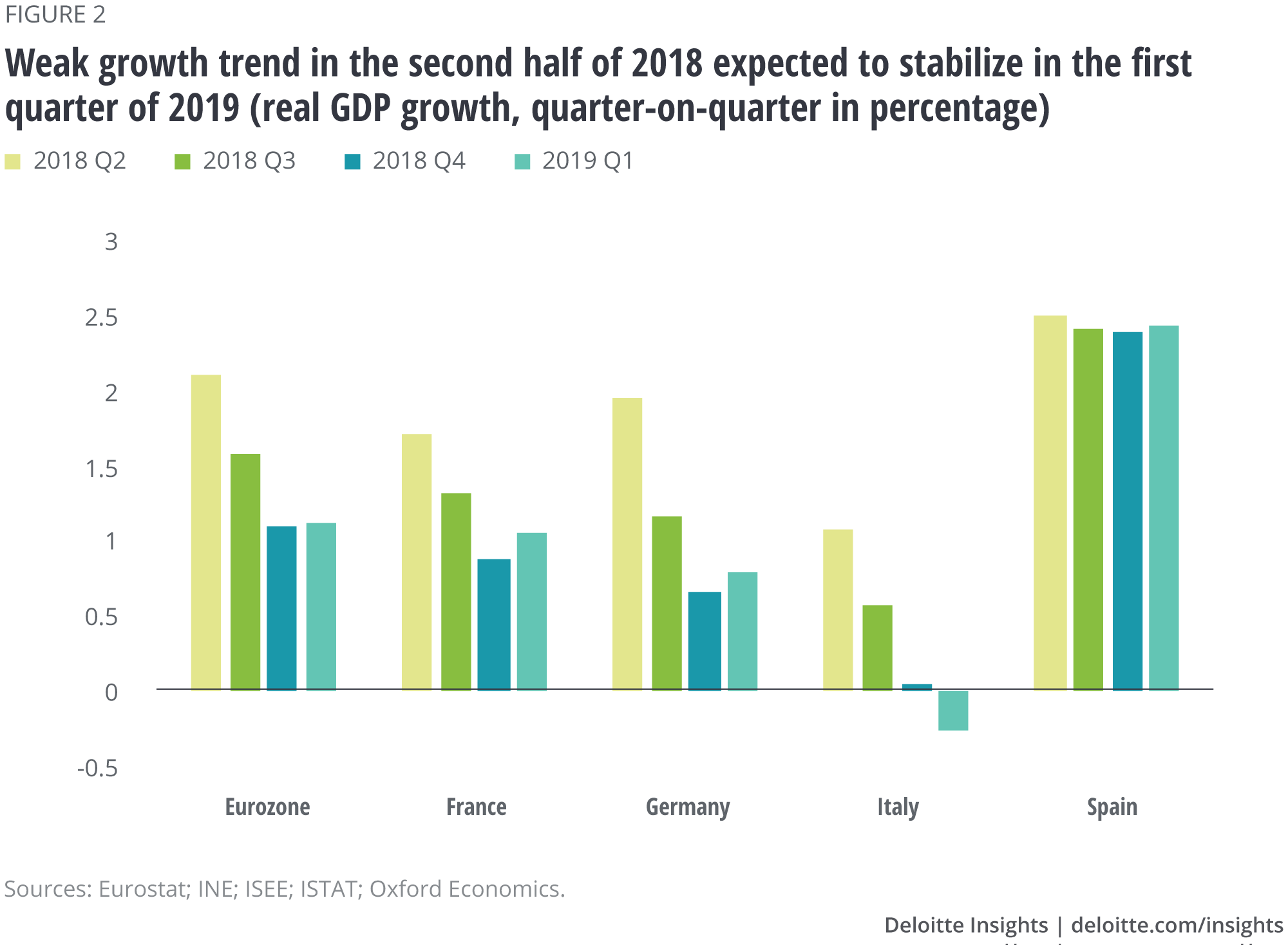 Interestingly, the overall weakness of the eurozone is mainly driven by the industrial sectors—the very sectors that normally power economic growth in Europe. Industrial production has been on a downward trend since 2018, especially in chemical and automotive sectors.5 There are numerous reasons for it—rising protectionism as well as declining growth rates in the United States and China have likely increased trade uncertainty and negatively impacted external demand. Additionally, industry-specific challenges in the automotive sector, especially the disruption of automobile production in Germany due to new emission standards for diesel-powered vehicles, added to the overall weakening of the eurozone economy.6

The current economic sentiment presents the emergence of a two-tier economy amidst declining overall sentiment. In aggregate terms, the flash estimate of the Purchasing Managers’ Index (PMI) lost momentum again in April, dropping to 51.3 from 51.6 in March (with 50 being the threshold between expansion and contraction). Therefore, overall economic sentiment remains in positive territory, although it is getting closer to the threshold.

A closer look at the headline figures reveals very pronounced differences between the export-oriented industrial and the domestic services sectors. While the industrial sector is flirting with a recession, the services sectors show a high degree of resilience, thanks to robust domestic demand (figure 3). 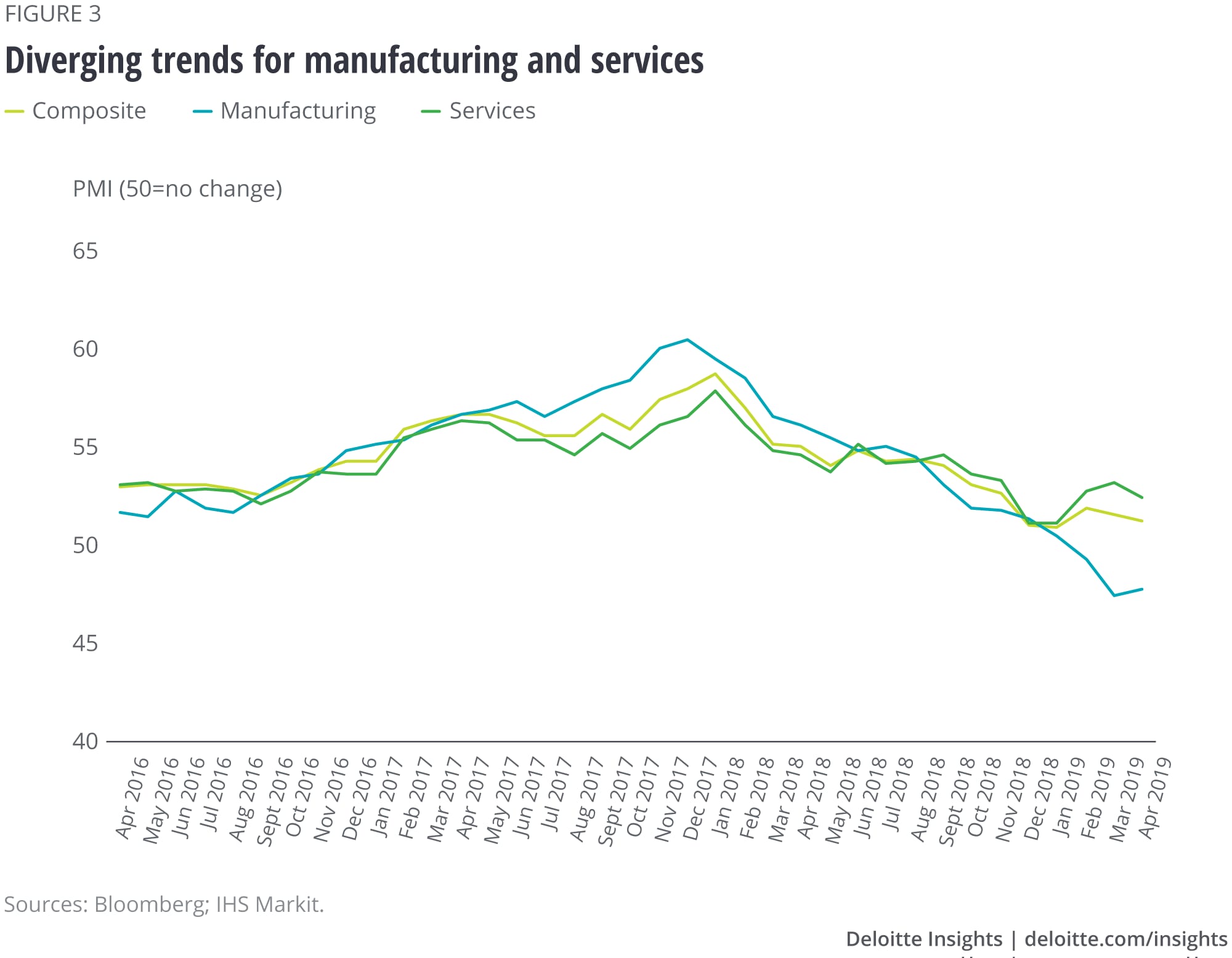 The manufacturing PMI currently stands at 47.8, clearly in negative terrain after it experienced the steepest downturn in six years in March. In Germany, it fell even further to 44.5. There is positive news too—the services sector shows much greater resilience, standing at 52.5. Thus, a robust services sector in the eurozone offsets the weakness of the struggling manufacturing sector. 7

The big question therefore is whether the negative trend in the industrial sectors will spill over to the domestic economy. And if it does, whether eurozone’s domestic economy is resilient enough to withstand these pressures. Labor market conditions suggest that at least in the short term, the domestic economy will likely continue to thrive. Eurozone’s labor market is in a good shape—employment is at a record high, companies in countries such as Germany are struggling to fill vacancies, and wages are rising. 8 Hence, it is likely that domestic demand will develop favorably.

Moreover, the findings of the latest Deloitte’s survey for chief financial officers (CFOs) reveal that only a third of the CFOs in the eurozone are expecting a recession in the next year. At the same time, many expect receding growth rates in the eurozone and in other parts of the world, implying that slower—albeit positive—growth is a likely scenario.9 In a way, eurozone is moving closer to its potential growth rate that stands at around 1.2 percent.10

The next chapter of Brexit

A hard Brexit remains one of the biggest and incalculable external risks for the eurozone economy due to the strong and intensive economic relationships between the European Union (EU) and its third-largest trading partner. However, the immediate threat of a hard Brexit has disappeared for the moment, with the EU agreeing to postpone the Brexit deadline to late October.11

The EU accepted the proposal of the British government to postpone the deadline again (from mid-April) to prevent a no-deal Brexit after the UK parliament failed to accept the withdrawal agreement three times. The new deadline comes in the form of a so-called “flextension.” If the British parliament accepts the withdrawal agreement prior to the deadline, Brexit can take place before the end of October—provided that the United Kingdom participates in the European parliamentary elections on May 23, for which preparations are underway (in the unlikely event that the United Kingdom fails to participate, it would exit on June 1). If the British parliament agrees to a withdrawal agreement, then the transition period, currently scheduled until the end of 2020, will kick in. During this period, the EU and the United Kingdom will negotiate the substance of their new economic and political relationship.

From a European perspective, the key risks of Brexit are clear. A recent Deloitte survey of 262 German corporates shows that companies most fear higher complexity and costs due to different regulations in the future (figure 4). The second-biggest concern is reduced export opportunities, again due to regulatory differences, but also due to possible tariffs. Nonetheless, corporates also see some opportunities in the form of new business potential through relocations to Germany or other parts of Europe as well as less through competition in the European or German markets.12 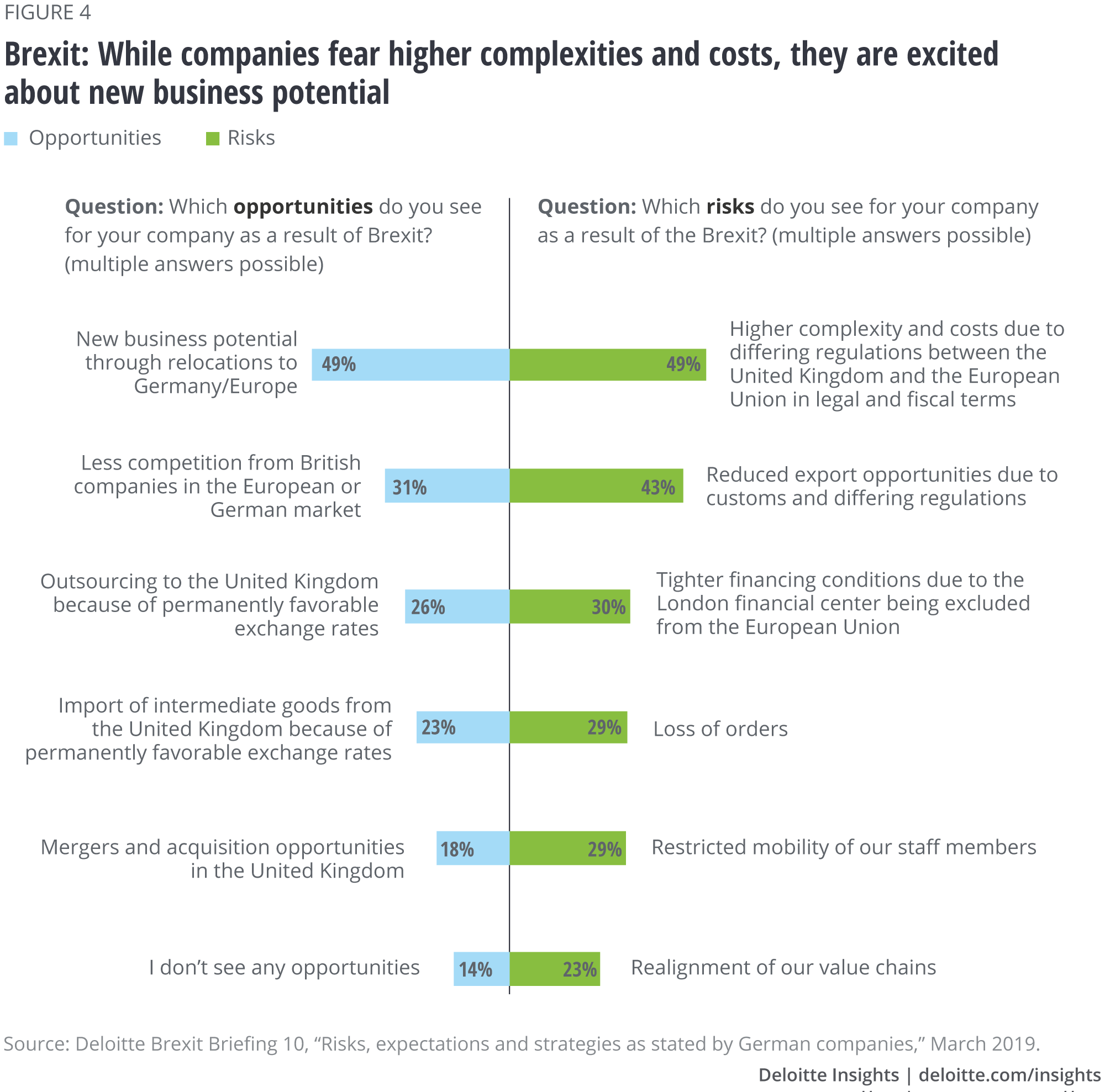 The effects of Brexit on eurozone corporates are only one example of external economic headwinds, alongside tensions in the global trading system and slower growth in Asia and China. These external headwinds indicate that exports are unlikely to drive growth in eurozone in the near future. Quite unusual for the export-oriented eurozone, its economic performance will mainly hinge on its domestic economy and domestic demand.