The Eurozone’s economy continues to grow, but there is less enthusiasm over the strength and pace of the recovery. The labor market and consumer spending remain strong, but political risks are increasing.

The Eurozone economy entered the year with enthusiasm. In 2017, growth was the highest since the financial crisis, and political risks in the region seemed to have disappeared. Six months later, things look less promising. The recovery has lost steam, while economic expectations have become more pessimistic. Nevertheless, the recovery seems to continue, albeit at a slower pace than expected.

The Purchasing Managers’ Index, one of the leading early economic indicators, accurately illustrates the current economic situation of the Eurozone (figure 1). Values above 50 indicate growing production. The index shows a downward trend since December, but remains in the positive territory. Another sentiment index, the ifo Economic Climate Index for the Eurozone, reached its highest value since 2000 in the first quarter, but fell considerably in the second. While the economic situation is still seen very positively, expectations have deteriorated. 1 Overall sentiment and economic momentum are on a downward trend, but the big economic picture still looks good. 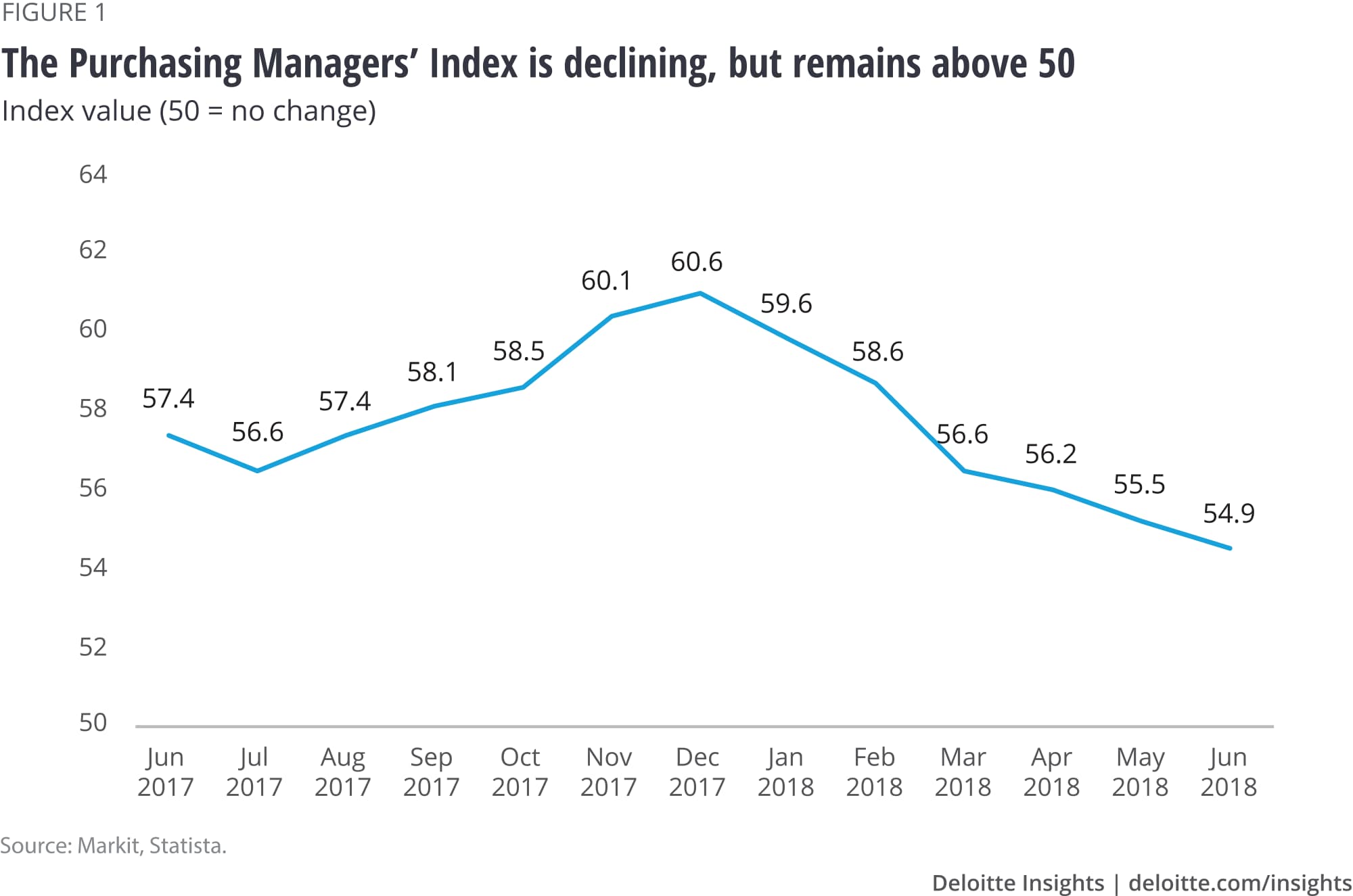 In the real economy, several trends shaped the economic performance. Exports dropped in early2018, following very strong growth in the second half of 2017, possibly due to a strong euro and a slowdown in world trade. In contrast, corporate investments have been growing firmly, while private consumption has been the main driver of growth.

Consumer spending has remained resilient on the back of declining unemployment. It is at a 10-year low of 8.4%, down from 9.2% one year ago.2 In absolute terms, it means that 1.2 million more people are in employment than were in mid-2017. 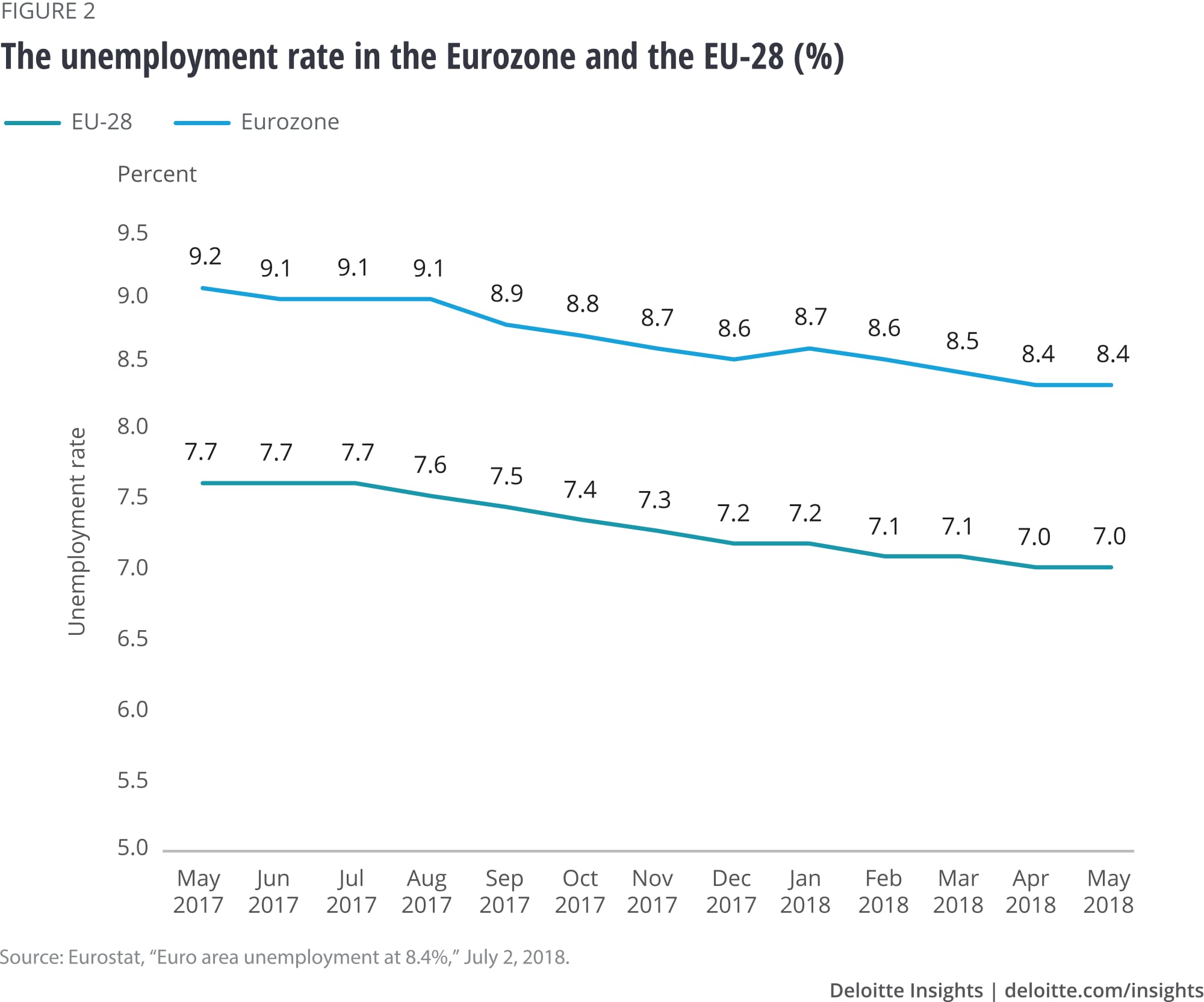 Nonetheless, differences in labor market performance and unemployment rates still differ widely between countries—unemployment ranges from 2.3 percent in the Czech Republic to 20 percent in Greece. Yet the overall trend is clear. The unemployment rate has been falling across member states, and the rising number of jobs is strengthening the purchasing power.

A possible threat for consumer spending comes from rising inflation. After years of very low inflation and deflation fears, inflation has picked up, springing to 1.9% in May, driven largely by rising energy prices. Core inflation stands at 1.1%. As wages have been growing only moderately, real income might fall, thereby dragging consumer spending.

The more uncertain outlook has also to do with new political risks, including an escalating global trade conflict that could potentially damage Europe’s export-oriented economies.

There are several regional risks too. A hard Brexit, for example, remains a realistic scenario. The anti-European Union rhetoric of the new populist Italian government raised concerns that Italy could leave the Eurozone or disregard its rules. The recently formed German government showed signs of instability due to a disagreement among the governing conservative parties regarding immigration and asylum policy. Member states in Eastern, Western, and Southern Europe also have similar disagreements over the issue.

Overall, governing the Eurozone and the European Union has become more complicated. Nonetheless, efforts are underway, driven by the French government, to reform the governance of the Eurozone. This will, however, require consensus-building among the member states.

Despite these complications, companies seem supportive of the European Union and keen to develop it further. In a recent survey of German companies, two-thirds responded in favor of having greater centralization of the European Union or greater cooperation in selected areas.3 Only 12% preferred to return competencies from the regional to the national level. Eurozone: Economy shifting down a gear has been saved

Eurozone: Economy shifting down a gear has been removed