How immigration is shaping the United States

How immigration is shaping the United States Issues by the Numbers, May 2013

Immigration and immigration reform are perennial topics of debate in the United States. What do the data say about how immigration is shaping the country?

With immigration reform high on the US Congress and administration’s agenda, it is important that the discussion be informed by an understanding of the role that immigration currently plays in the US economy and that adequate thought is given to what the United States’ future needs will be.

The United States has historically been viewed as a meritocracy graced with abundant natural resources and a tolerance for diversity, making it a magnet for people looking to improve their economic prospects regardless of their origins. Beginning with those who established the first successful permanent settlement at Jamestown in 1607, various waves of immigrants from around the world have come to this country to build new lives for themselves and their families. The United States has greatly benefited from each generation of new arrivals. Today, immigrants to the United States contribute needed advanced technical skills, augment the native-born workforce in sectors such as agriculture, generate entirely new businesses, and help balance the United States’ age distribution in the face of a large retiring baby boom generation.

After falling to an all-time low of under 5 percent in 1970, the foreign-born population of the United States rose steadily over the intervening years and has remained fairly steady between 12 percent and 13 percent of the total population over the last few years.1 Of those foreign born, 45 percent, or 18 million, are naturalized US citizens, and the other 55 percent, or 22 million, are non-citizens—a combination of legal permanent residents, holders of temporary visas, and those here illegally.2 Current estimates place the size of the illegal or undocumented population at approximately 11 million or half of the foreign-born population.3

Compared to the other industrialized nations, the United States is not an outlier in terms of having a substantial foreign-born population. Rather, it is just below the median (figure 1). Where the United States does differ significantly is in the category of migrants admitted. Seventy-four percent of new migrants to the United States are granted immigration status on the basis of family preference, and only 6 percent are granted permanent entry on work-related visas. In the European Union, excluding the “free movement” flows allowed intra-EU, work-related visas account for 40 percent of immigration.4

Having workers with advanced training in science, technology, engineering, and math (STEM) is key to fostering innovation within national borders. US research universities are highly respected for their ability to provide world-class advanced STEM education, but many of those they educate are only in the United States temporarily. Overall, 36 percent of those receiving a STEM-related doctorate in a US university in 2011 were students holding temporary visas.5 The situation is particularly acute in PhD programs for engineers, mathematicians, and computer scientists, where over half of those enrolled are foreign students in the United States on temporary student visas (figure 2). Even though many of these students might want to stay in the United States, the visa process is neither simple nor guaranteed. 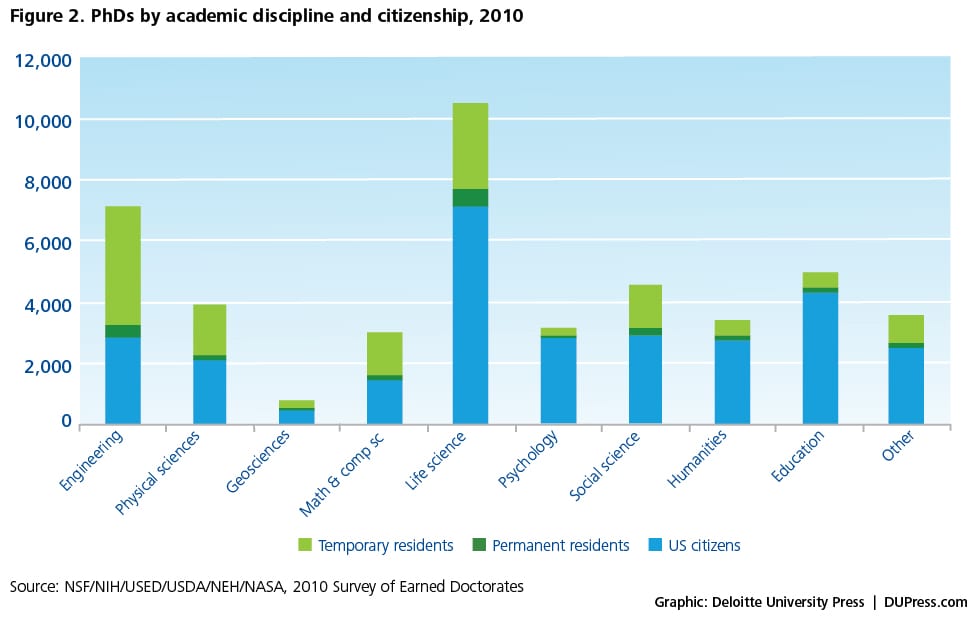 The United States does manage to employ a proportion of foreign-born advanced STEM degree holders, irrespective of where they received their education, through a combination of immigrant and non-immigrant visas. Their importance to the US workforce is most critical in fields where the highest levels of education and training are needed. Similar to the student profile, half of the PhDs working in engineering, mathematics, and computer science occupations in the United States are foreign-born (figure 3). 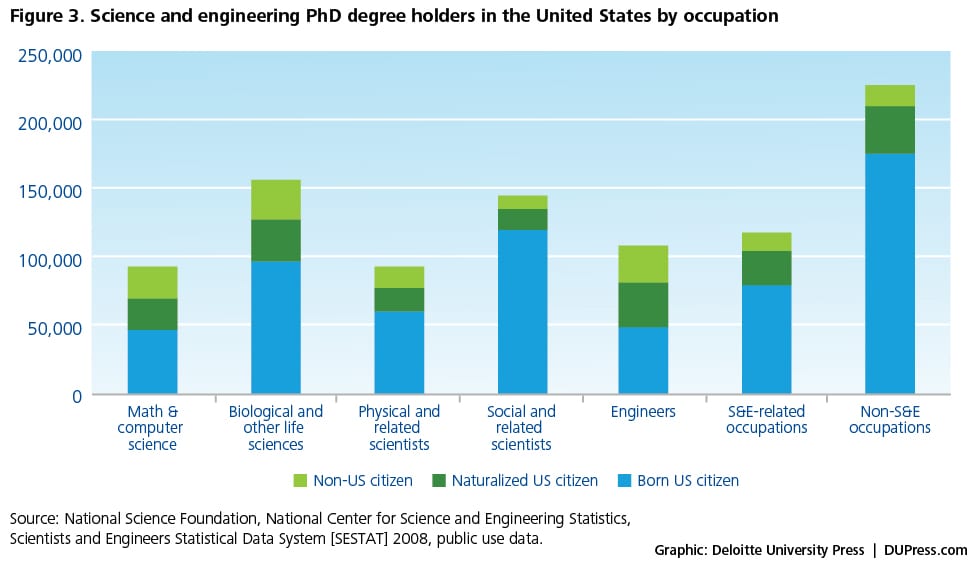 A major employment conduit for foreign-born STEM talent is the H-1B, a visa for high-skilled, temporary, non-immigrant workers that allows employers to petition to employ foreign specialty workers when they cannot find domestic equivalents. Only 1 percent of H-1Bs admitted do not hold at least a bachelor’s degree (generally sports figures, models, and actors), and 58 percent hold a master’s degree or higher.6 Over 50 percent of the H-1Bs issued in 2011 were for workers in computer-related occupations.7

Absent a change in the educational patterns of US-born students, our need for foreign-born workers with advanced STEM degrees will only increase in the coming years as demand for workers with these skills continues to rapidly expand (figure 4) and the baby boom portion of the United States’ science and engineering workforce nears retirement. Between 1993 and 2008, the proportion of scientists and engineers over 50 increased from 18 percent to 27 percent.8 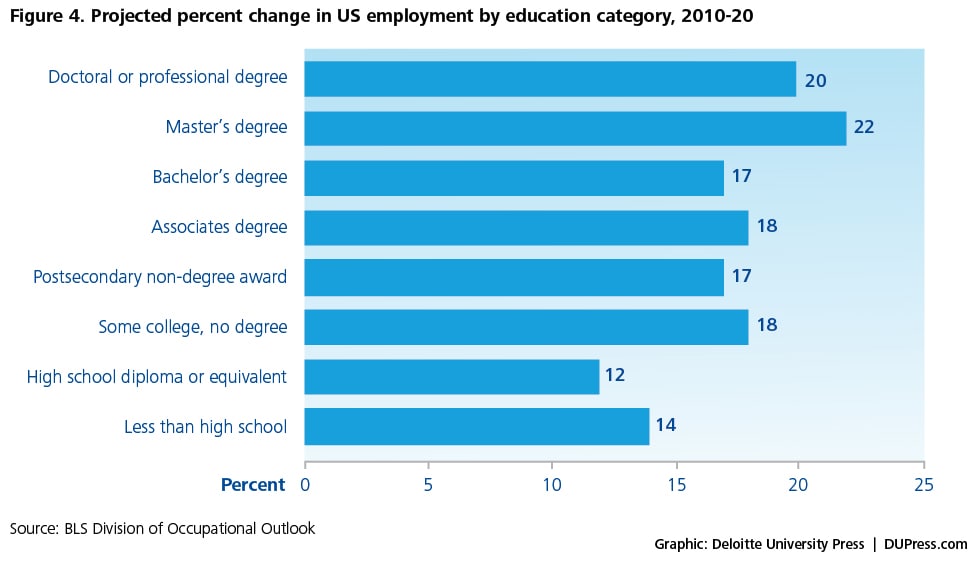 Immigration contributes to the vitality of the United States in ways that go beyond providing high-skilled employees. The propensity for risk-taking displayed by someone who leaves his or her homeland contributes to the entrepreneurialism and new business generation that is critical for ongoing economic renewal. Further, there are lower-skill jobs that would go unfilled without foreign-born workers.

Immigrants are vitally important to creating the companies that will generate job growth. For example, among engineering and technology companies founded in the United States between 2006 and 2012, 24.3 percent had at least one key founder who was foreign-born; in Silicon Valley, the proportion was 43.9 percent. Nationwide, these companies employed roughly 560,000 workers and generated $63 billion in sales in 2012.9

The value from immigration is not limited to those with high educational achievement. Although the percentage of individuals with a bachelor’s degree or higher is greater among naturalized US citizens than among native-born citizens (35 percent to 30 percent), a higher proportion of naturalized citizens also have less than a high school education (19 percent to 10 percent). Among foreign-born non-citizens, the proportion with less than a high school education is even higher—39 percent (figure 5). This is also an advantage for the United States. Many of the occupations projected to add the most new jobs over the next 10 years are those that require little formal education, such as home and personal care aides and retail and food service workers.10 These are enabling occupations that are complementary to other types of workers in the economy, particularly the highly skilled. As the US native-born population continues to gain in educational attainment, immigrants will be critical in filling those jobs requiring less formal education. 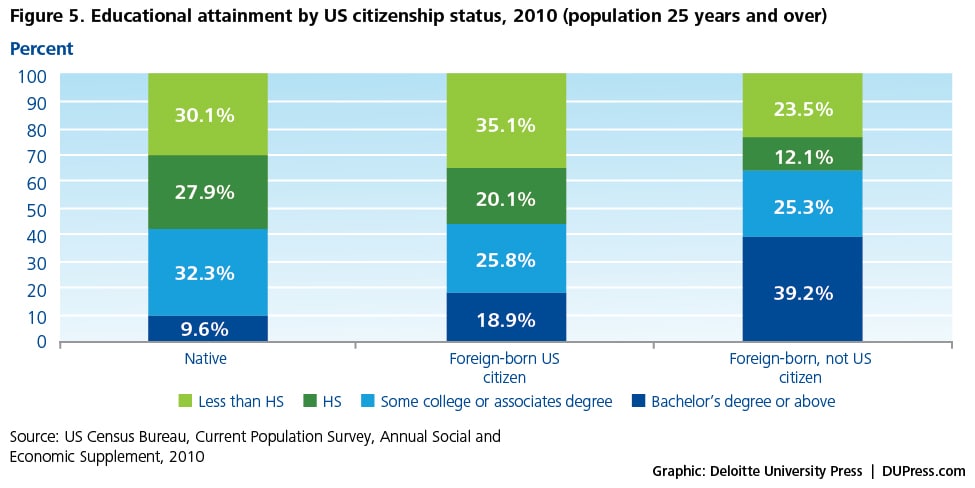 Farm workers are a particularly important component of the foreign-born workforce at the lower end of the educational spectrum: 71 percent of the United States’ farm workers are foreign-born,11 and about half of those are undocumented.12 Without these workers, the ability of the United States to continue to produce the current quantity and quality of farm products for domestic consumption and export would be endangered. Food security is a critical component of national security, and the United States cannot be food-secure without the contribution of foreign-born workers, whether they are temporary or permanent residents. 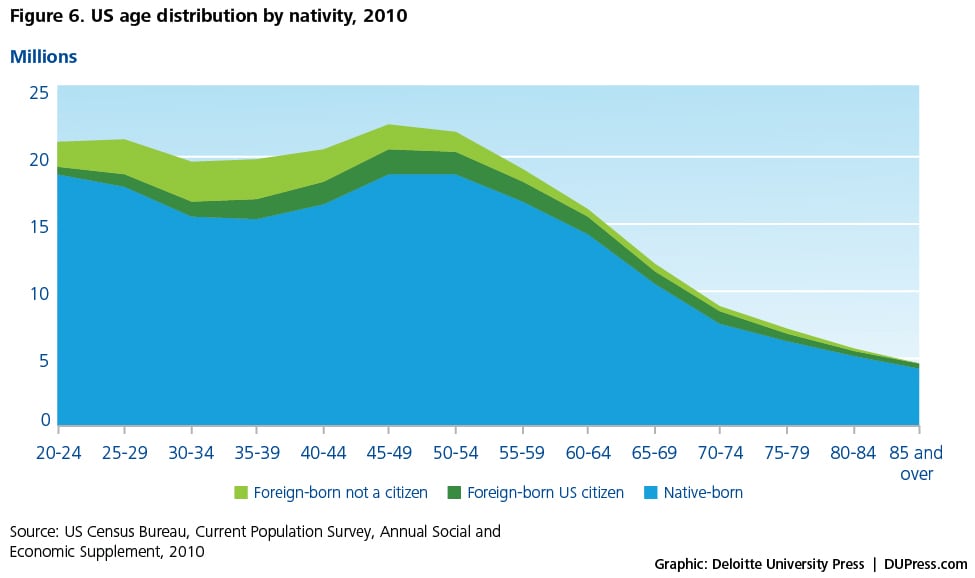 Many countries are actively tailoring their immigration laws to encourage STEM workers to relocate, and most industrialized countries already admit a greater proportion of highly skilled immigrants than does the United States (figure 7). Countries that have had particular issues with “brain drain” are investing heavily in education and research facilities; top students and researchers are finding that obtaining a world-class education or conducting cutting-edge research does not necessarily require attending a US university. And, in a challenge to what has generally been viewed as a uniquely American strength, new entrepreneurs are learning that the United States is not the only country where they can successfully start new businesses.

The United States cannot be complacent that the advantages conferred by past immigration will continue into the future as global competition for talent increases. It is clear that this more intense global competition will be fought on many fronts. A thoughtful look at immigration reform—one that balances family and workforce needs—may well hold one of the keys for the United States to gain and maintain a competitive advantage in a world where the most highly skilled have a choice as to where they will live and work.

How immigration is shaping the United States has been saved

How immigration is shaping the United States has been removed