Women in the C-suite

More women are serving in emerging C-suite roles than traditional ones, such as CEO or CFO.

The composition of today’s C-suite across industries is markedly different than it was a decade ago.1 Organizational needs over the last few years have shifted, as digital transformation and disruption, demographic changes, and macroeconomic forces have brought sweeping changes to the business environment. To navigate this complexity, most firms have created new kinds of C-level roles as a strategic imperative.

Today’s C-suite not only includes traditional roles but typically a host of new designations that were virtually unheard of before 2010. Chief executive, chief financial, and chief operating officers are now often joined by chief diversity and inclusion, chief sustainability, chief data, and chief privacy officers in the executive suite. The ties to business priorities are clear: For instance, leveraging big data and analytics has become a competitive advantage, which is why many firms have a designated chief data officer (CDO). A 2018 survey of US financial firms found that 62.5 percent of respondents had appointed a CDO, a dramatic increase from just 12 percent in 2012.2 Similarly, with the potential privacy issues created by big data, the hiring of chief privacy officers, or equivalent roles, across industries in the United States increased by 77 percent from 2016 to 2019.3 Meanwhile, as investor interest in corporate responsibility continues to grow, more and more companies are adding chief sustainability officers to their C-suite rosters.4

The financial crisis of 2007-2008 seems to have been a turning point in the creation of these new roles. In our analysis of more than 100 large US financial institutions,5 we found only 24 individuals in these emerging categories in 2009—in line with the numbers seen over the previous decade. Since then, these positions grew at a 17 percent annual rate, to 117, by 2019. This growth suggests that post-crisis challenges forced institutions to rethink the roles they would need to support recovery and reconsider the individuals needed to drive that change. Since 2010, C-suite leadership roles tied to diversity and inclusion, customer experience, sustainability, and brand grew the fastest, which seems to align with an increased focus on reputation. The emergence of these roles has provided new opportunities to join the highest levels of leadership in financial services.

In the first part of this series,6 we found that while the overall proportion of women in the C-suite7 rose to 27.9 percent in 2019 from 18.6 percent in 2010 (figure 1), women’s representation remains below parity.8 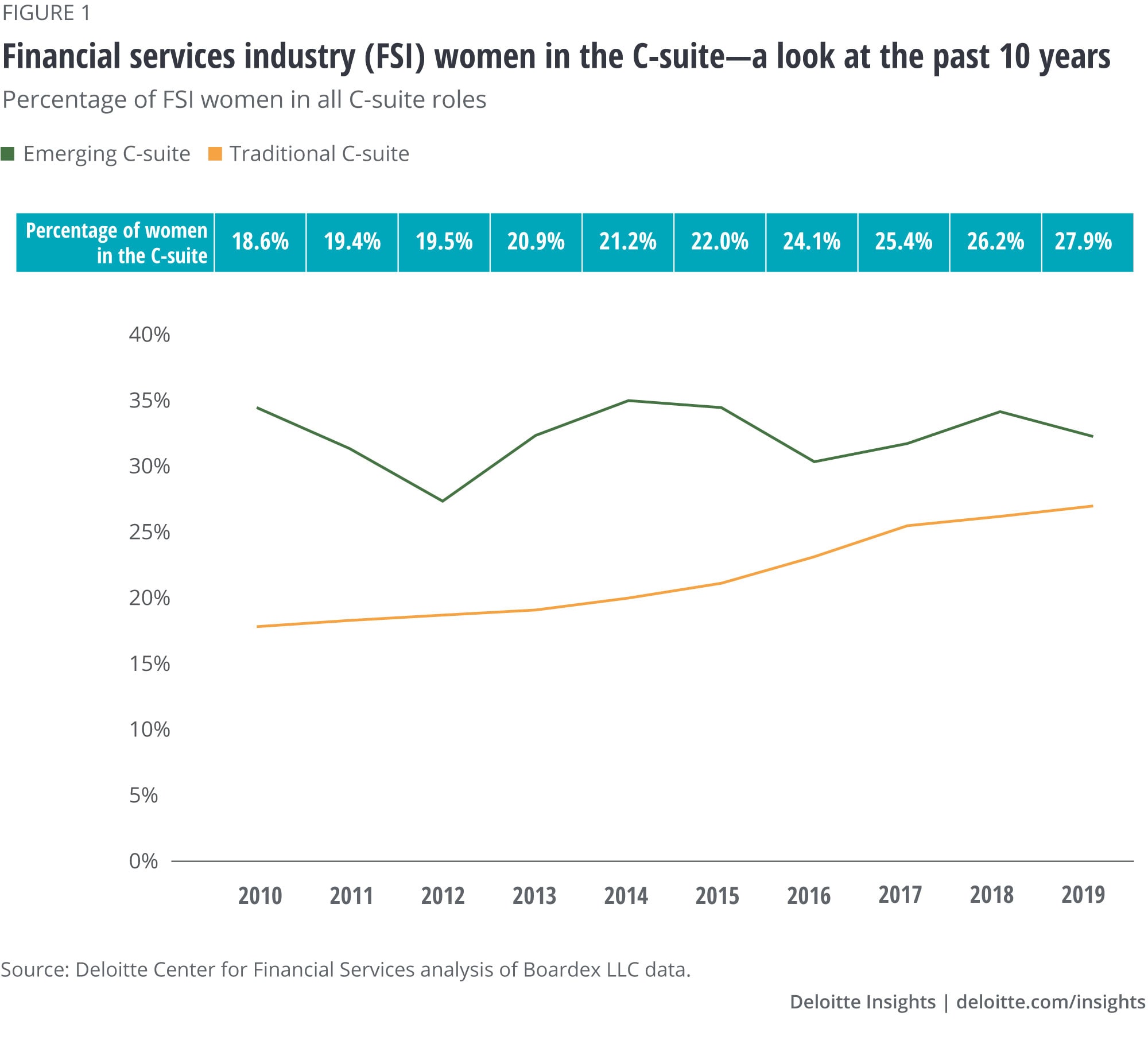 Expanding the C-suite: What are the emerging leadership roles?*

*Note: List of roles is provided for context. Actual role names may vary across institutions.

However, upon closer examination, these emerging C-suite roles (see sidebar, "Expanding the C-suite: What are the emerging leadership roles?") have a higher representation of women than any other leadership category. Overall in 2019, women accounted for 32.5 percent of emerging C-suite leaders, compared with 27 percent in traditional C-suite roles, and 20.3 percent of those in management roles one to three levels below the C-suite.9 Across a 10-year average, women accounted for 32.7 percent of emerging roles versus 21.9 percent of traditional C-suite positions.

While there is no clear consensus on why women are more likely to occupy emerging C-suite roles than more traditional C-level positions, it is possible that emerging roles are unencumbered by the obstacles that have historically impeded women’s journey to leadership. What’s more, many of these roles—frequently hybrids—tend not to have a set career path, which could result in more avenues to reach them.

Which emerging leadership roles have the highest proportion of women? We categorized emerging C-suite titles into 10 subtypes based on function. According to our analysis of over 100 large US financial institutions (figure 2), chief diversity and chief learning officers are more likely to be women, representing 86.7 percent and 61.5 percent of these roles, respectively. Women serving as chief brand (46.4 percent) and chief sustainability (50 percent) officers are nearly or already on par with men. And perhaps more interestingly, over the last decade the share of women as chief innovation (32.4 percent), chief data analytics or chief digital (28.5 percent), and chief strategy (25.2 percent) officers also exceed their average share in traditional C-suite roles, where their representation has historically lagged. Some of these results may be due more to a rebranding of roles that have traditionally been held by women, such as diversity and learning roles that may have been formerly housed within broader HR leadership positions. But others, such as those leading innovation, analytics and data, and strategy, are perhaps more “new-to-world” and, thus, do truly represent new leadership opportunities. 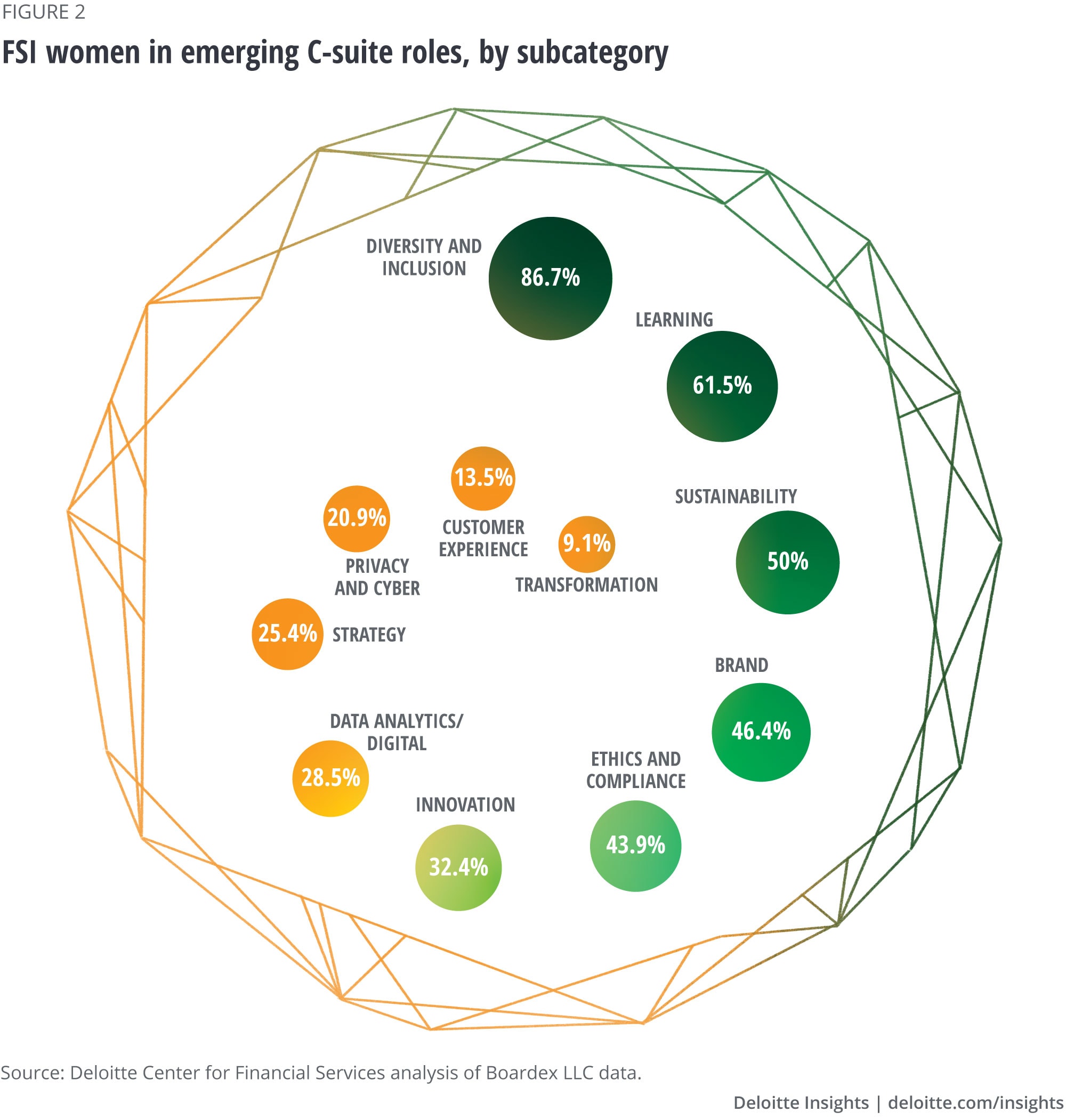 For women, though, their representation across all categories of emerging leadership grew at an annual rate of 17 percent over the last decade, with brand, data analytics/digital, D&I, and sustainability leading the growth charge. This could indicate that women are increasingly viewed as critical to driving the future success of the industry.

When looking at advancement opportunities at the highest organizational levels, however, it should be noted that roles with profit and loss responsibilities are frequently seen as a step on the ladder to CEO.10 Notably, none of the emerging role categories are linked to revenue generation or leading lines of business. Without these responsibilities, firms should consider the impact some of these new roles may have on the upward mobility of women into the upper echelon of company leadership, and explore the following:

In the first part of this series, we asserted that women are well-positioned and fully capable to lead financial institutions into the future.11 Our analysis of the development of emerging C-level roles within financial services, and women’s better-than-average, and increasing, ownership of these roles over the past decade, supports this view.

The future will almost certainly continue to be marked by rapid change and complexity; there will be further exponential technology advancements and increased customer and regulator demands for environmentally and socially responsible behavior. The beginning of a new era for gender equity in financial services leadership may indeed be on the horizon. A future article in this series will provide an analysis of the path to CEO. In it, we hope to better understand the degree to which line-of-business leadership is required for CEO consideration, or if some of these emerging leader roles might also be on the path to CEO for both men and women.

The authors would like to thank Sarah Dyer, chief marketing officer, 100 Women in Finance; Michael Petrillo and Kenton Anderson of Deloitte Data Platforms; and Alok Ranjan, Narasimham (Simha) Mulakaluri, and Shruti Panda from the Data Science team for their contributions to this series.

The authors would like to thank the following for their contributions to this article:

The Deloitte Center for Financial Services, which supports the organization's US Financial Services practice, provides insight and research to assist senior-level decision-makers within banks, capital markets firms, investment managers, insurance carriers, and real estate organizations. The center is staffed by a group of professionals with a wide array of in-depth industry experiences as well as cutting-edge research and analytical skills. Through our research, roundtables, and other forms of engagement, we seek to be a trusted source for relevant, timely, and reliable insights. 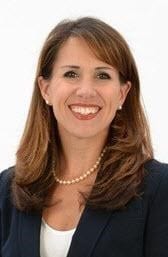 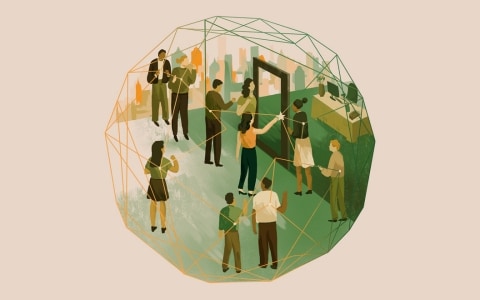 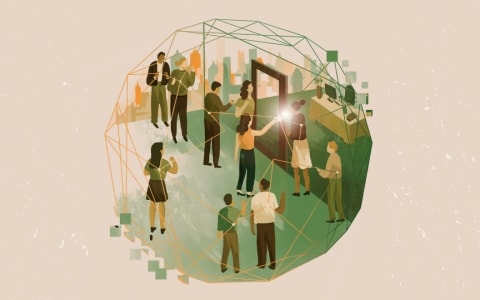 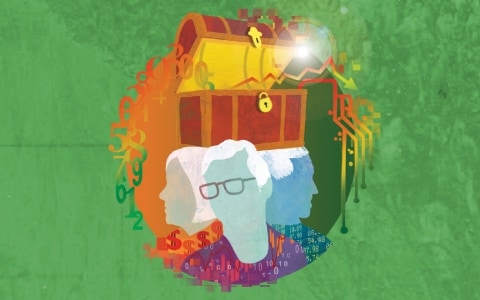 Tapping into the aging workforce in financial services 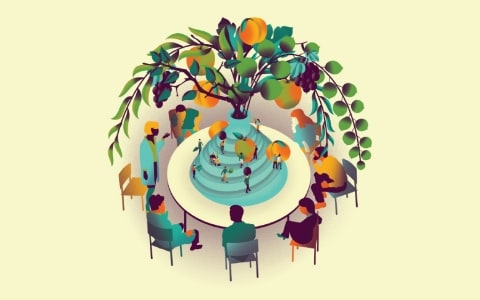 The inclusion imperative for boards

More from the Financial services collection 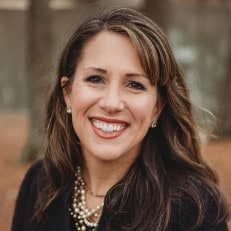 Alison is the marketplace leader for the Richmond practice at Deloitte LLP and a managing director, lead client service partner and client relationship executive. As marketplace leader, Alison champions the Deloitte brand in Richmond, oversees hundreds of local professionals delivering services in audit and assurance; consulting; tax; and risk and financial advisory and helps drive the Richmond practice’s strategy for growth, client service, talent, and operations. During her more than 20 years of experience, Alison has specialized in creating authentic connections and providing offerings and services to help solve client challenges across a range of topics from strategy development to organizational dynamics to leadership advancement to team optimization. Alison is also a passionate advocate for women’s leadership and development and a co-sponsor of several gender equity initiatives, including Deloitte’s industry-focused collaboration with The Female Quotient and Within Reach? Achieving Gender Equity in Financial Services, a research series from Deloitte’s Center for Financial Services that analyzes the rise of women in leadership positions in the financial services industry. Alison holds a Bachelor of Science degree in Industrial and Labor Relations from Cornell University and a Master of Arts degree in Organizational Psychology from Columbia University. 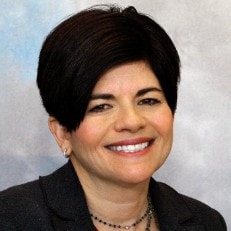 Stacy is the National Practice leader for Deloitte’s Retirement & Wealth Consulting practice and principal in the Financial Services practice. Stacy has more than 30 years of experience in the retirement plan industry and defined contribution business as a service provider and consultant. Stacy focuses on serving Providers of Retirement assisting them with their business issues and providing ideas to differentiate their business offering. Stacy is the Executive Sponsor for Deloitte’s Defined Contribution Plan Sponsor Benchmarking Survey and has a deep understanding of the current trends and leading practices in the Retirement Services marketplace. 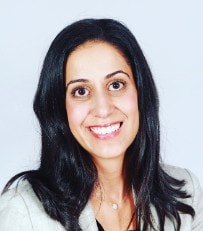 Neda Shemluck is the US Financial Services Industry DEI leader and a Managing Director for Client and Market Growth in the financial services industry.

Women in the C-suite has been saved

Women in the C-suite has been removed