​What can retailers do to capture US shoppers' hearts and minds—and wallet share—during the 2017 holiday season? A look into consumers' anticipated budgeting, shopping, and purchase behaviors can help.

Retail in transition: Where we’ve been, how far we’ve come

Digital advances combined with changes in consumer preferences have helped to transform retail operations1 more in the previous five years than in the last twenty. Through the early 1970s, US retail was often dominated by community-based local mom-and-pop stores offering highly local, personalized shopping experiences. In the late 1970s, this scenario gave way to the rise of “chain” retailers, whose success was based more on purchasing power than personalization. Today, in the digital age, it may be easier than ever to become a retailer, but many believe that consumers wield a great deal of power in the retailer-shopper relationship, and personalization has come back with a vengeance. People can—and often do—shop online for a wide variety of items, yet many also prefer retailers to maintain a physical presence, with one-third of this year’s holiday survey respondents saying that it was important that brands offer “both a store I can visit and an online site.”

What can retailers do to capture consumers’ hearts and minds—and wallet share—in such an environment? Understanding their spending plans for the upcoming holiday season can help. By taking the pulse of anticipated consumer budgeting, shopping, and purchase behavior prior to the launch of seasonal gift-buying, Deloitte’s annual holiday survey can not only help retailers plan their year-end marketing and merchandising strategies, but help identify trends that will likely remain important year-round as retailers continue to adapt to evolving consumer demands and expectations. For instance:

The picture that emerges is one of rising consumer expectations for a seamless, effortless customer experience. And once again, this expectation is anticipated to affect both online and in-store channel preferences for where consumers do their research, browse for ideas, and ultimately make their purchases. Retailers that understand what makes for a satisfying shopping experience—and that can deliver that experience across channels to an increasingly fragmented consumer base—will be poised to set themselves apart from the competition.

As we look back on previous years, please visit our holiday survey retrospective dashboard for an interactive view of holiday shopping by the numbers!

Economic indicators point to another year of growth in holiday shopping. A recent Deloitte estimate suggests that 2017 holiday sales will increase approximately 4 to 4.5 percent compared with 2016.4 US retail sales between November 2016 and January 2017 (seasonally adjusted and excluding automotive and gasoline) grew 3.6 percent and totaled $1.0 trillion, according to the US Commerce Department.5

This year’s holiday survey suggests that online channels will capture a majority (51 percent) of Americans’ holiday budgets, contributing to an estimated 18 to 21 percent increase in 2017 e-commerce sales compared with 2016.6 In-store purchases are expected to account for only 42 percent of this year’s holiday purchases. The average consumer, according to our survey, plans to purchase 15 gifts this holiday season, roughly the same as in 2016; half of our respondents admitted that they are planning to purchase gifts for themselves while shopping for others. While shopping for others, 53 percent of respondents plan to buy indulgent gifts for others that the recipients would not buy for themselves.

Non-gift spending is expected to account for almost two-thirds (65 percent) of the average holiday budget this year, as consumers say they plan to spend more on household essentials such as clothing or furniture (29 percent), as well as experiences such as socializing at home, travel, or tickets to sports or entertainment events (39 percent).

The number of gifts purchased this holiday season is expected to be stable, with consumers likely to average one more gift than in 2016. Nearly 1 in 5 respondents claim that they plan to take advantage of holiday sales. Those who do are likely to spend 23 percent of their budgets after December 25.

With US retail sales totaling $3.7 trillion in 2016, our survey indicates consumer spend sentiment continues to improve: 79 percent of our respondents plan to spend as much or more this holiday season as they did during last year’s. In short, this year’s holiday shopping season may well be worth upwards of $1 trillion to American retailers.7

A closer look at the data suggests some interesting patterns in consumer spending.8 For example, the reasons cited most often by our respondents for spending less than last year during the 2017 holiday season encompass factors such as saving more, paying down debt, higher food prices, and a worsened financial situation, among others (see “Top reasons for planning to spend less this holiday season”). 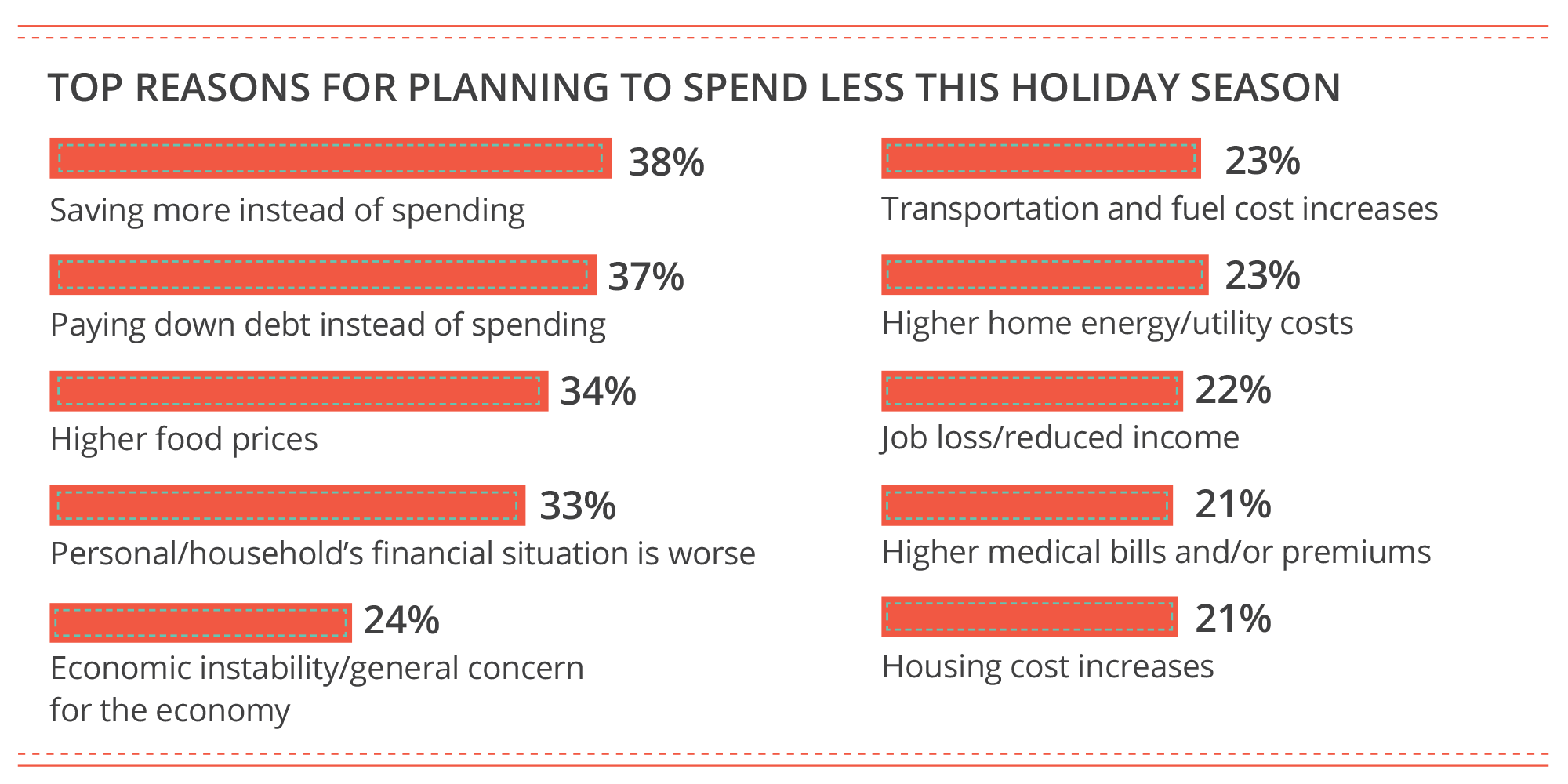 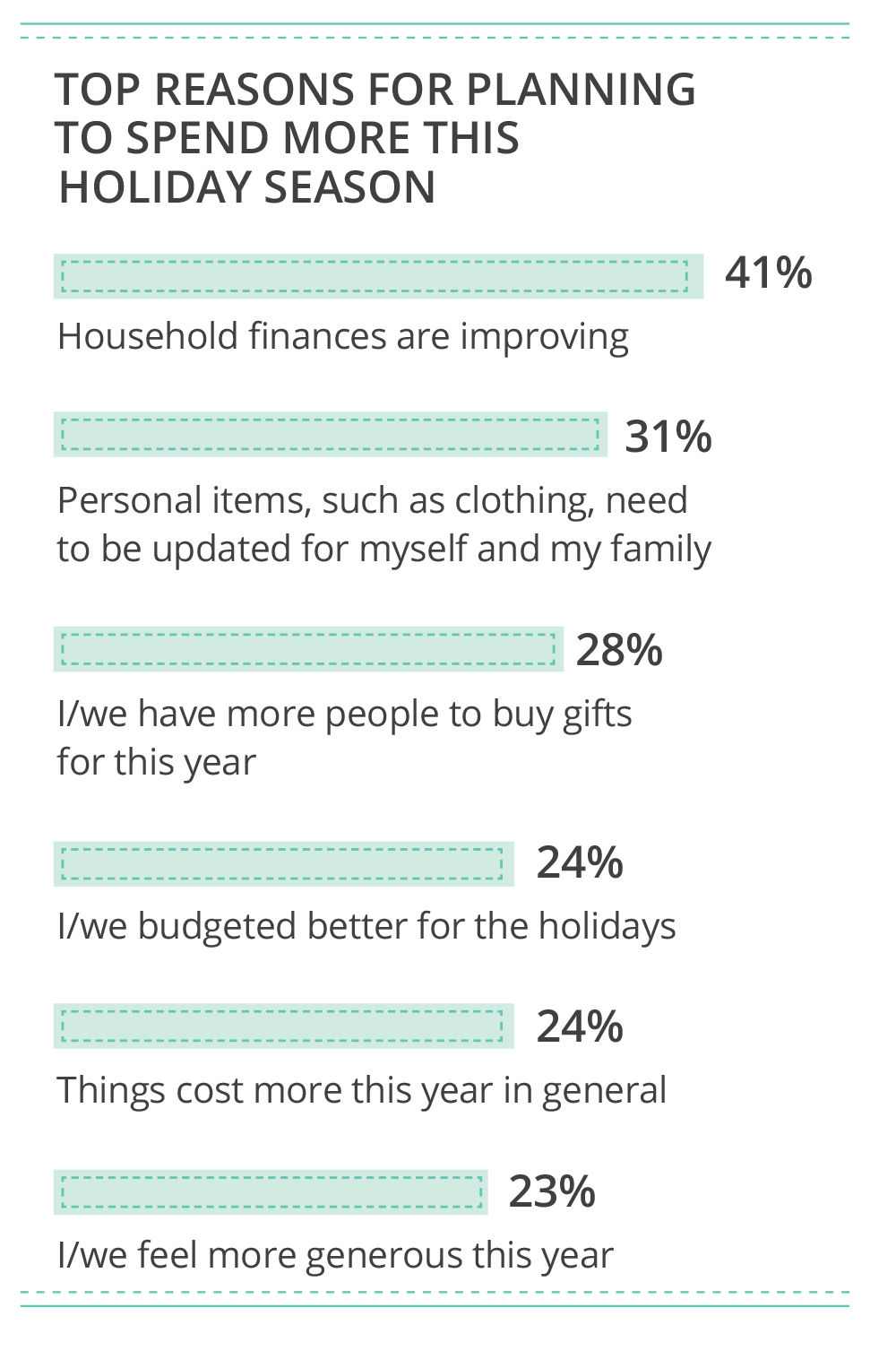 While shoppers may aspire to be less consumed by consumerism,9 the numbers tell a different story—namely, that the lure of shopping, with its own type of experience, is likely to remain in high demand. All of this likely bodes well for retailers that can provide a differentiated shopping experience along with unique products, an assortment of in-demand merchandise, and a variety of shipping options.

Moreover, a demographic analysis of our survey results reveals that higher-income shoppers are expected to spend nearly double ($2,226) the overall average ($1,226), while households with annual incomes under $50,000 are likely to spend about 48 percent of this amount. Those with graduate or professional degrees are slightly more likely to earn and spend more than other segments. 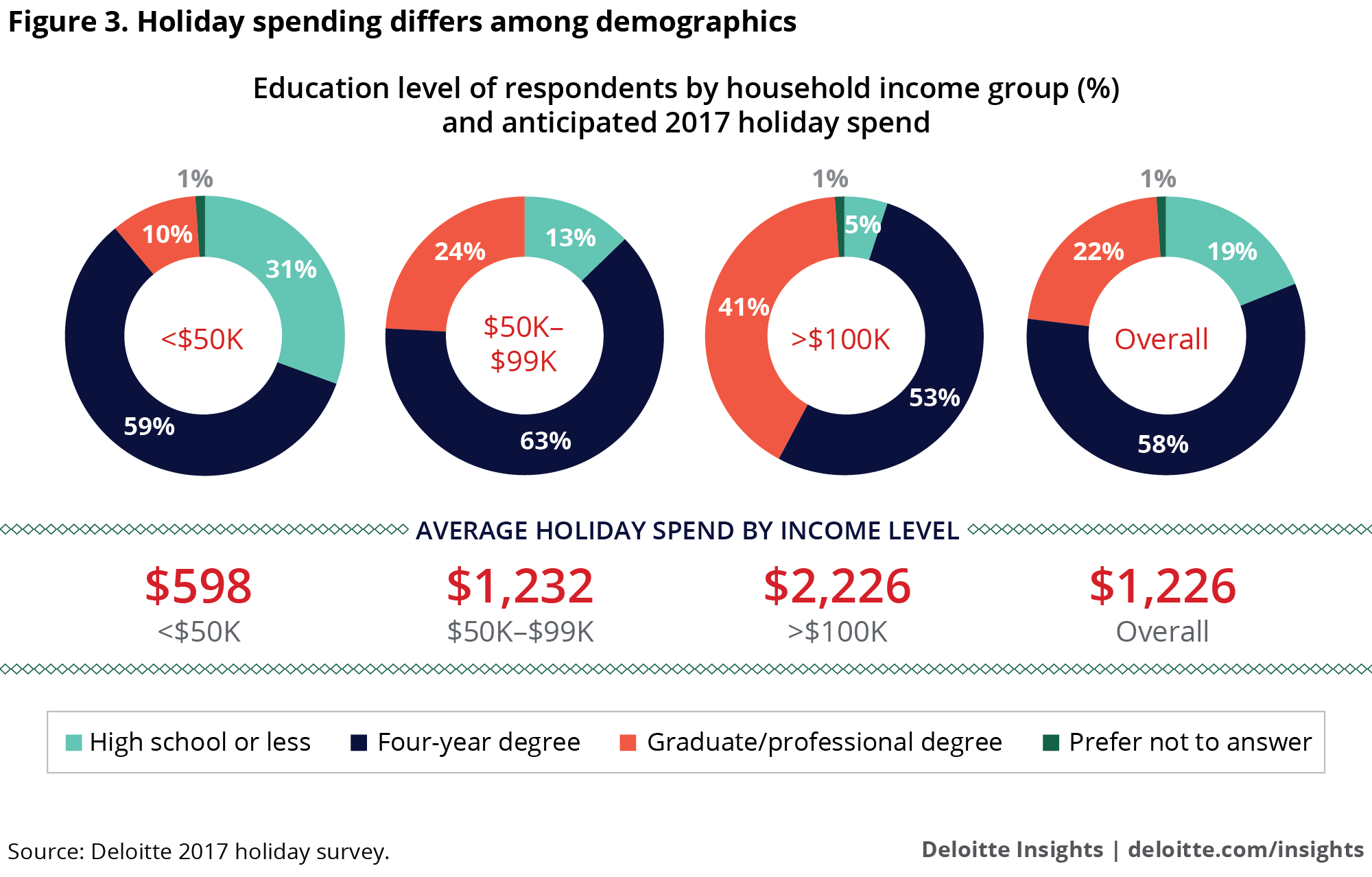 Today, consumers have more options for how and where to spend their money, with both switching costs and brand loyalty lower than ever before. To survive, many retailers are finding ways to serve individual consumers in ways tailored to their circumstances and desires—transforming both their value propositions and their business models.

Online has edged out in-store this holiday season as consumers’ preferred retail channel, capturing 51 percent of our respondents’ anticipated holiday spend. In-store purchases, on the other hand, are likely to account for only about 42 percent of our respondents’ holiday spend. (The remaining 7 percent of spend is expected to occur through channels such as print catalogs and direct mail promotions.) This may represent a watershed moment in holiday retail, as last year’s survey showed respondents’ spending split equally between online and in-store, at 47 percent each. Also noteworthy is that 3 out of 10 survey respondents said that it is important that retailers have both a physical and an online presence.

The retailers most likely to survive amidst the rising tide of online purchases are those that can provide a tremendous variety of offerings while maintaining a more personalized level of customer engagement than their competitors, regardless of the interaction channel.10 Our survey suggests that several competitive attributes are especially important in helping retailers win consumer wallet share: 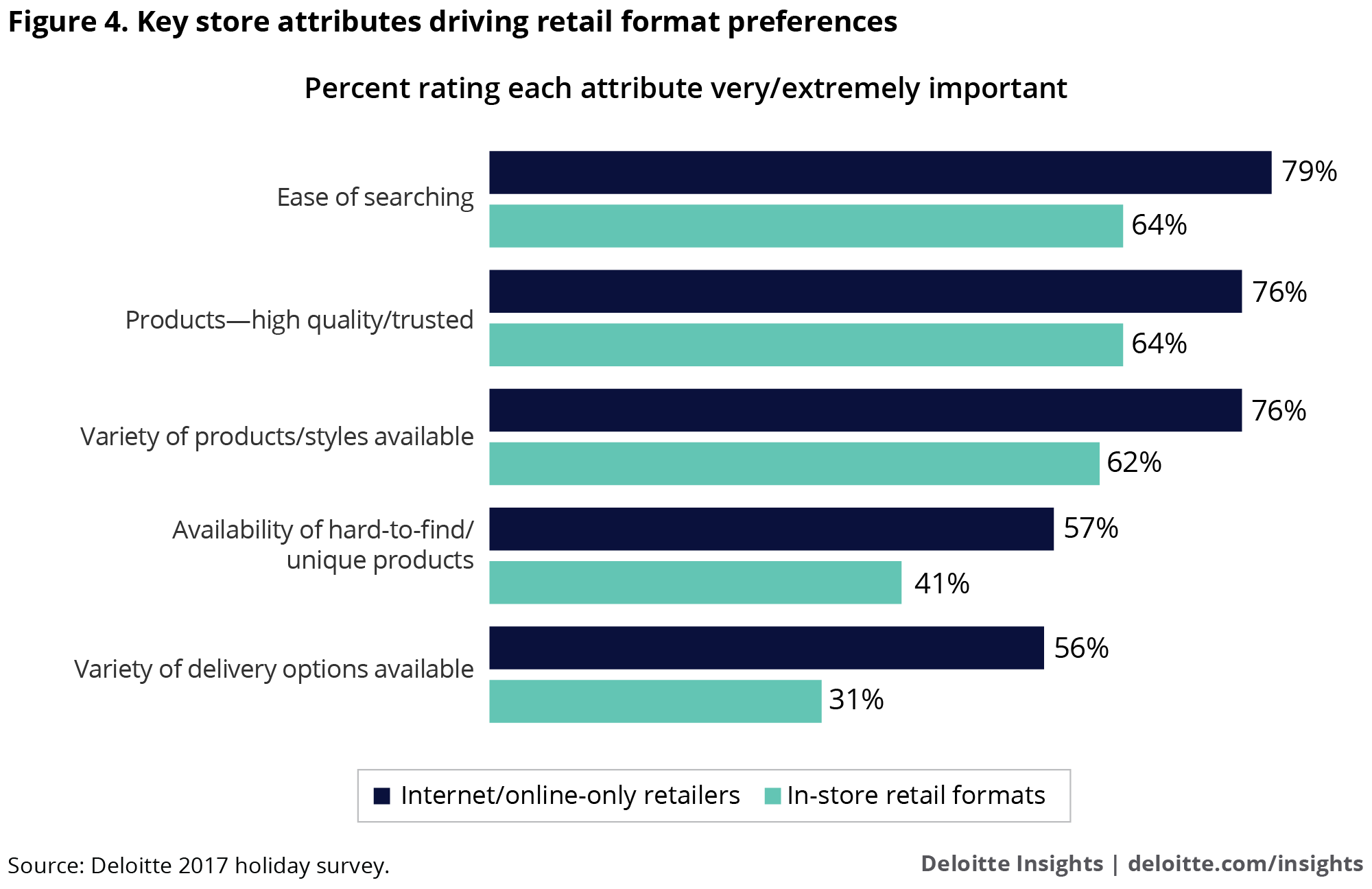 Internet retailers are anticipated to win a greater share of consumers’ holiday budgets in part by outperforming in-store venues in five specific areas, illustrated in figure 4. In addition, our survey revealed that consumers in certain demographics, including higher-income households and Generation X,11 are likely to visit a slightly wider variety of retail store formats than those in other demographics, with Generation Z consumers,12 seniors, and those with annual household income less than $50,000 visiting the fewest. 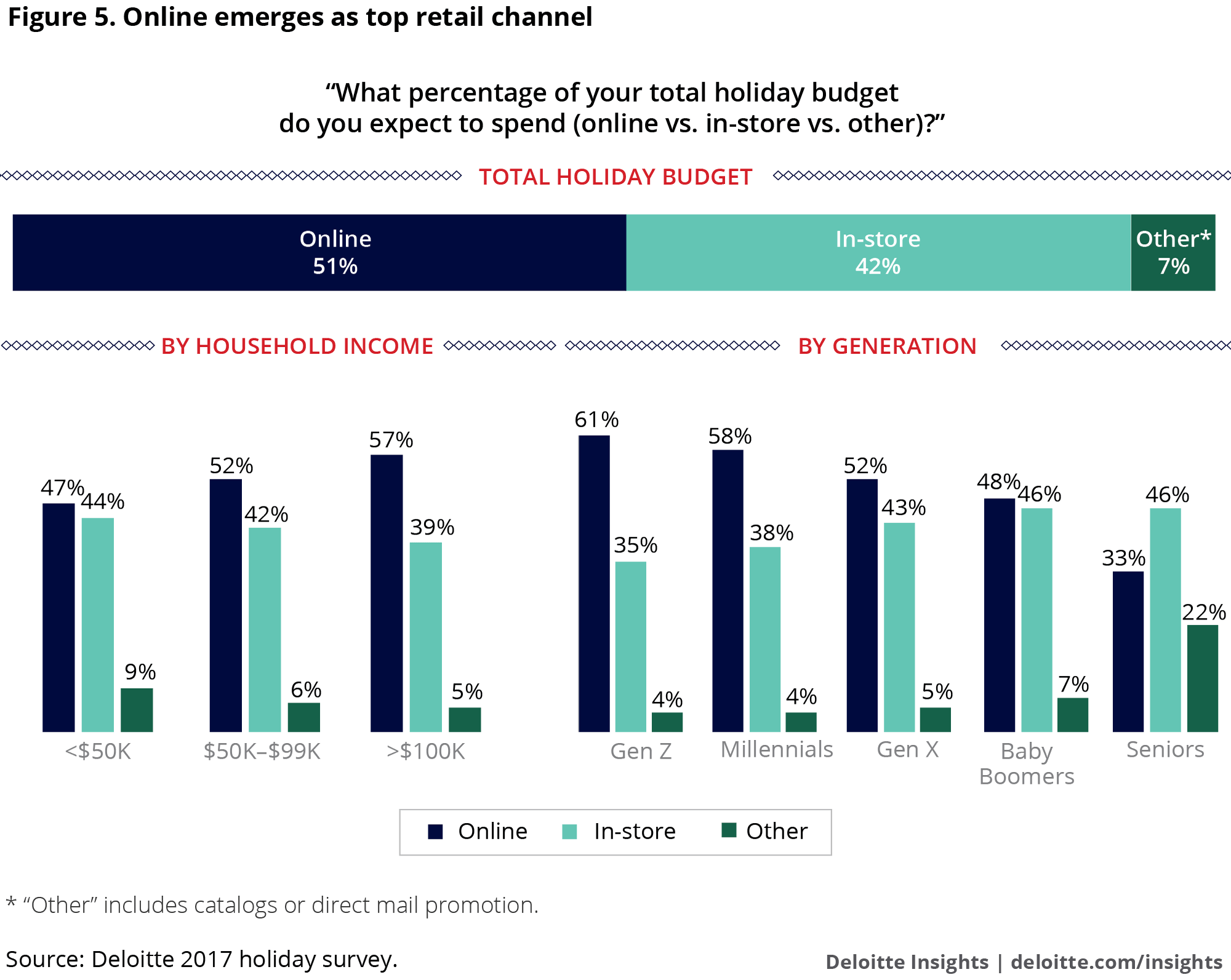 Younger shoppers and those in higher-income households (with an annual income of $100,000 or more) are expected to spend significantly more online than seniors (those 65 and older). Among the most popular purchase categories, clothing is expected to consume the largest proportion (25 percent) of the average household budget, with toys (18 percent) and electronics (16 percent) rounding out 60 percent of shoppers’ total allocation.

Retailers may wish to consider assessing the maturity of their digital strategy in light of online’s increasing importance as a holiday shopping channel. Our analysis found that 83 percent of survey respondents expect to use their desktops and/or laptops for holiday-season shopping, and among that 83 percent, the probability of converting a browser to a purchaser is an estimated 75 percent. Among those using a smartphone in holiday shopping, the expected conversion rate is 59 percent. Similar to last year, consumers in this year’s survey again said they would use digital devices for activities such as checking and comparing prices, reading reviews, tracking order status, and obtaining product information such as availability by store location. 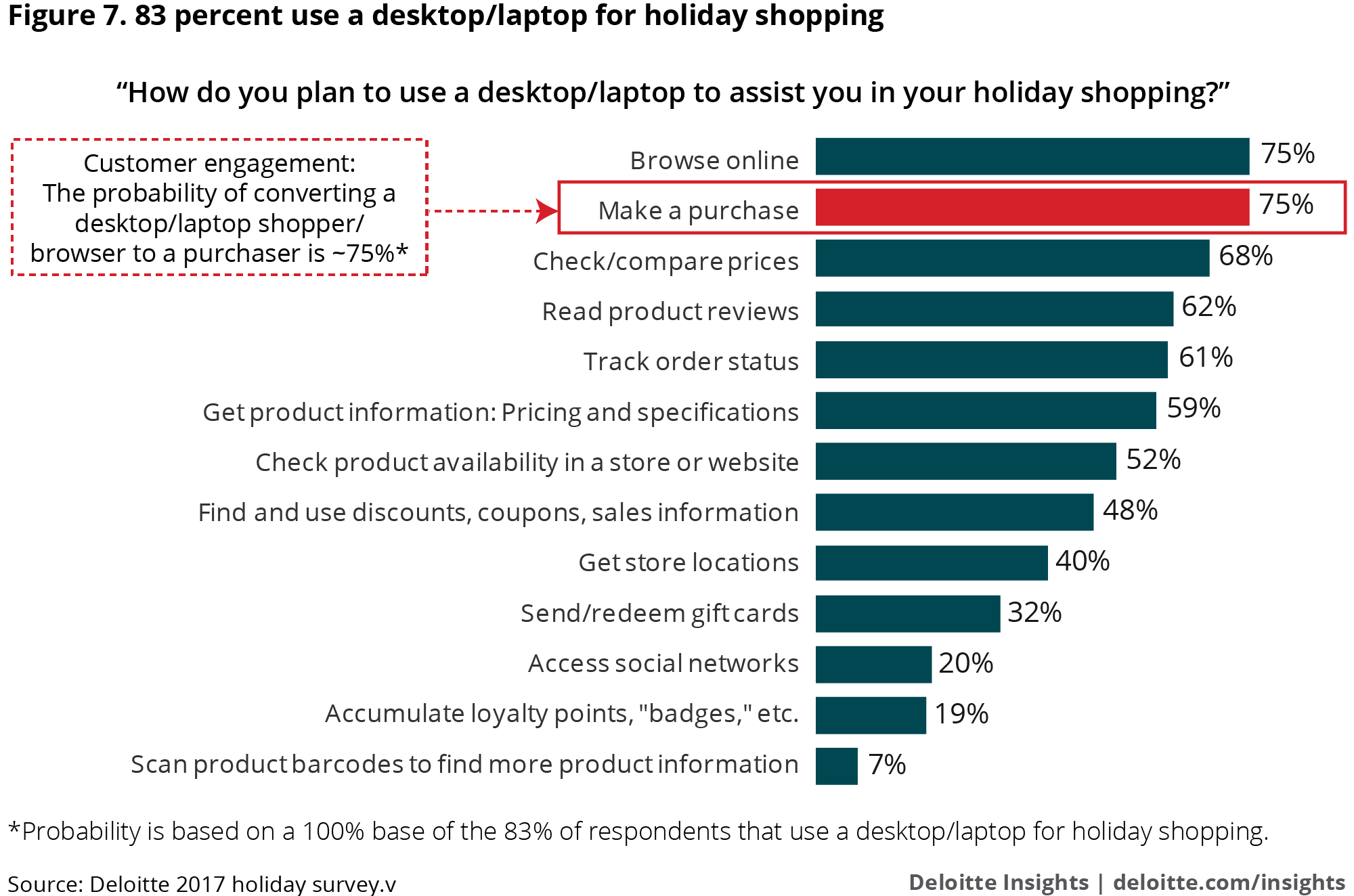 Among preferred payment methods, 52 percent of higher-income and 40 percent of mid-range households cite using credit cards, while lower-income shoppers prefer to use debit cards. Additionally, the use of smartphones as a digital payment platform continues to rise. Shoppers electing to pay via smartphone most often said that they planned to use a retailer’s dedicated app, a third-party payment app, or go directly to a retailer’s website.

Smartphones are used in a variety of ways

Customer experience: Where, what, why, and when do consumers shop for the holidays?

Consumer fragmentation by age and income continues to manifest, as cohorts such as Generation Z, Generation X, Millennials,13 Baby Boomers,14 and seniors show distinct preferences and behaviors. Our survey identified several curious retail venue preferences. For instance, both seniors and those with annual household incomes below $50,000 share an inclination for visiting supermarkets and grocery stores for gift shopping, relative to other demographics.

While the online channel remains the top choice across segments, it was intriguing to uncover that Generation Z respondents selected fast fashion stores, and Millennials off-price stores, among their top three preferred retail destinations—both cited at the rate of 26 percent. Traditional department store loyalty seems to reside with both Gen X and the Baby Boomers, as well as with households with an annual income of $50,000 and above. 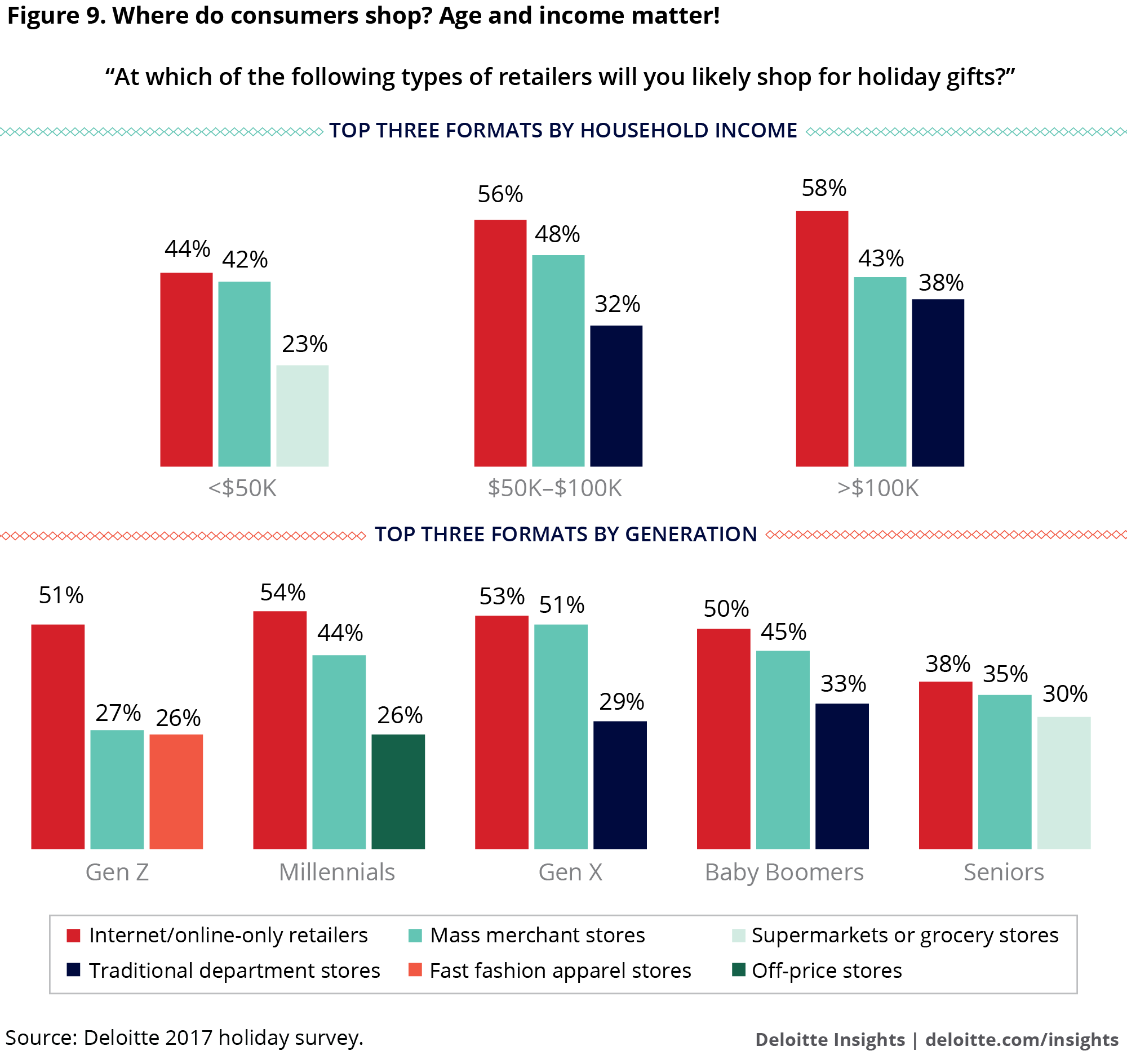 The reasons that consumers prefer to shop either online or in-store also differ by demographic. Among those preferring to shop in-store, the ability to interact with a product, the absence of shipping costs, and the opportunity to find inspiration top the list of factors driving this preference. 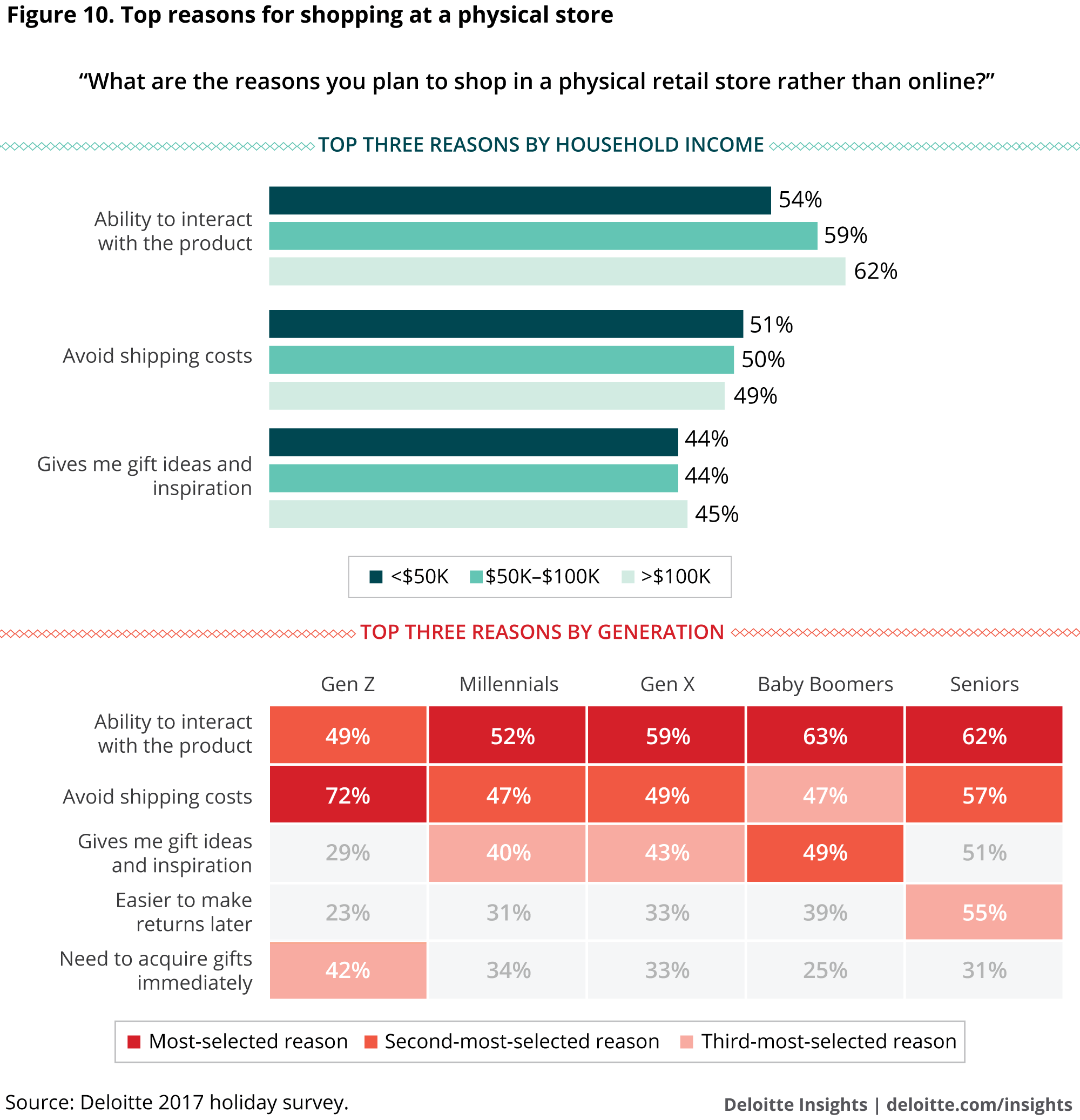 Conversely, many online shoppers say they prefer the online channel for the time-saving convenience of shopping from home, the ease associated with home delivery, and the financial benefit of free shipping. Free shipping, in fact, topped the list of perks shoppers planned to take advantage of in this year’s holiday season (72 percent), in addition to store policies for easy returns (44 percent) and price matching (42 percent). 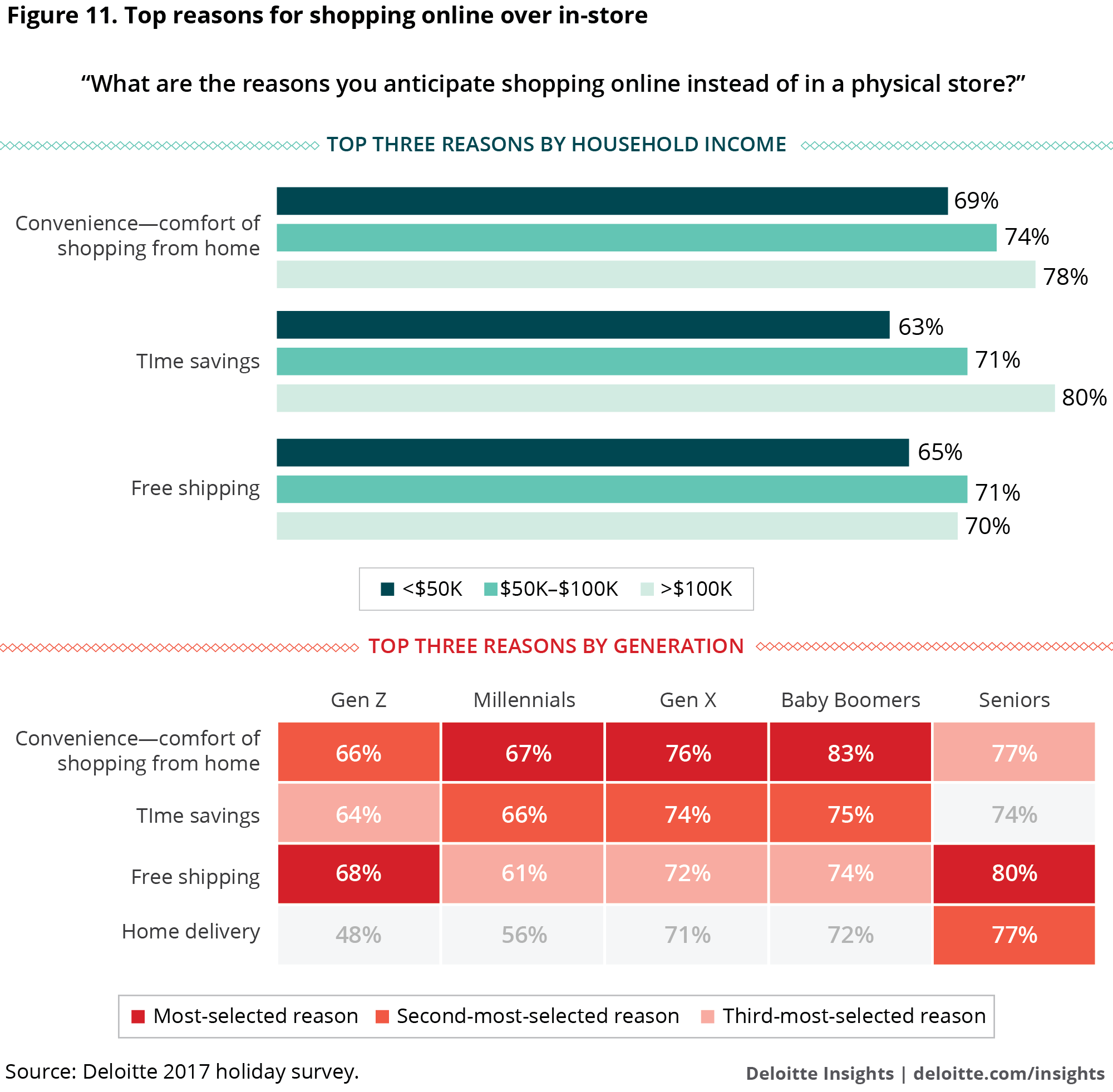 In this 2017 holiday season, we encourage retailers to evaluate how our survey insights might apply to their store operations. Growing fragmentation across numerous segments15 may create the imperative for retailers to better understand consumers’ preferences with regard to:

Physical retail store formats will not disappear. However, they may need to adapt and transform in order to realize profitable growth in a highly competitive blended environment where digital has the potential to not only influence but also capture market share. For many retailers, too, maintaining a dual in-store and online presence will remain important. In this new reality, knowing which operational levers to pull may be key to thriving.

This survey was developed by Deloitte and conducted online by an independent research company during September 6–18, 2017. It polled a national sample of 5,085 consumers aligned with the US census for age and income. The survey has a margin of error for the sample of plus or minus one to two percentage points.

Rod Sides, a Deloitte Consulting LLP principal based in Charlotte, NC, is vice chairman of Deloitte LLP. He leads the US Retail, Wholesale & Distribution practice and the Global Retail Consulting practice.

Many thanks to Leslie Ament, Venkata Sangadi, Arun Tom, Ashley Dunham, Courtney Flaherty, and Kerri Sapp for their contributions to this report. 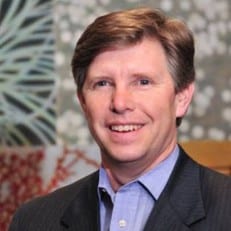 Rod is vice chair, Deloitte LLP, and leads the US Retail & Distribution practice. He is responsible for driving key sector initiatives that include original research, talent development, and strategies that guide retailers as they navigate uncertainty, compete globally, and improve performance and profitability. A principal in Deloitte Consulting LLP, Rod has more than 25 years of experience in store operations, supply chain, procurement, back-office operations, and IT.