30 May, 2019 - The European football market’s revenues have grown by 11% to €28bn, according to the 28th Annual Review of Football Finance from the Sports Business Group at Deloitte. The increase was driven by the ‘big five’ European leagues, who increased their combined revenues by 6% in 2017/18, as well as the FIFA World Cup in Russia.

Despite this revenue growth, aggregate operating profits of Europe’s ‘big five’ leagues fell in 2017/18 as wage spending caught up with the significant revenue uplifts generated by English and Spanish domestic broadcast deals in 2016/17. The Bundesliga and Serie A saw operating profit increases of 9% and 8% respectively.

Dan Jones, partner and head of the Sports Business Group at Deloitte, commented: “Excluding the cyclical impact of UEFA and FIFA national team tournament finals, we have seen revenue growth in each of the 18 years we have calculated the size of the European football market. With live football remaining one of the most highly sought after entertainment assets for both attendees and broadcasters, as well as one of social media’s hottest topics, we expect this growth to continue.”

“While the Premier League continues to lead the way, Spain and Germany are engaged in ongoing competition to be next in line. Germany leapfrogged Spain following the commencement of its new four-year broadcast deal. We expect Germany to retain its status as the second highest revenue generating league in the next edition, with La Liga potentially overtaking again in 2019/20.”

The Premier League continued to maintain its significant revenue advantage over its closest rivals in 2017/18, having generated a combined €5.4bn, up from €5.3bn in 2016/17. In revenue terms, the English top flight is now 72% larger than the Bundesliga; however, its wages/revenue ratio worsened in the 2017/18 season to 59%, following a 15% increase in wage spend.

The start of the German Bundesliga’s new broadcast deal contributed to an uplift of c.€290m in broadcast revenues and saw them replace La Liga as the second largest revenue-generating league in the world.

La Liga clubs’ revenues broke the €3bn barrier for the first time after growth of 7%. The increase was in part driven by Real Madrid’s third consecutive UEFA Champions League triumph in the 2017/18 season, coupled with Barcelona’s commercial growth, which included a new four-year shirt sponsorship with Rakuten. The two powerhouses of Spanish football took the top two places in the 2019 Deloitte Football Money League.

Italy’s Serie A continued to struggle to keep pace with the revenue growth seen in England, Germany and Spain. While revenue rose by 8% (to €2.2bn), it was not enough to narrow the ever-increasing gap. The league’s wage cost increases were slower than the other ‘big five’ leagues and this resulted in the lowest wages/revenue ratio (66%) since the 2005/06 season. Despite this, Juventus’ acquisition of Cristiano Ronaldo and other transfer activity in the 2018 summer window is likely to result in wage increases in the 2018/19 season.

The French top-tier, Ligue 1, continued to generate the least revenue of Europe’s ‘big five’ leagues (€1.7bn), with reductions in both broadcast and sponsorship revenue being offset by increases in matchday and other commercial income. The league must wait until 2020/21 for its next significant broadcast rights increase, when domestic rights values are set to increase by over 55%, to around €1.2bn per season, greater than the current domestic rights value of Serie A (€1bn) and similar to the domestic rights fees currently received by La Liga.

Beyond the ‘big five’ European football leagues, the Russian Premier League (€813m) surged ahead of the Turkish Süper Lig (€731m) to take its place as the sixth-highest revenue generating top-tier league in Europe, driven by a new broadcast rights deal and increased matchday revenues resulting from stadia improvements and developments for the 2018 FIFA World Cup.

Sam Boor, senior manager in the Sports Business Group added: “The 2018 FIFA World Cup in Russia brought direct and indirect revenue boosts to the European football market. This resulted in growth from the impact of FIFA, UEFA and National Associations on the European market size of 75%, from €2.4bn in 2016/17 to €4.2bn in 2017/18.”

The impact of a new domestic broadcast deal for the Turkish Süper Lig is expected to enable it to reclaim its position as the sixth-highest revenue-generating top-tier league in Europe in the 2020 edition of the Annual Review of Football Finance. 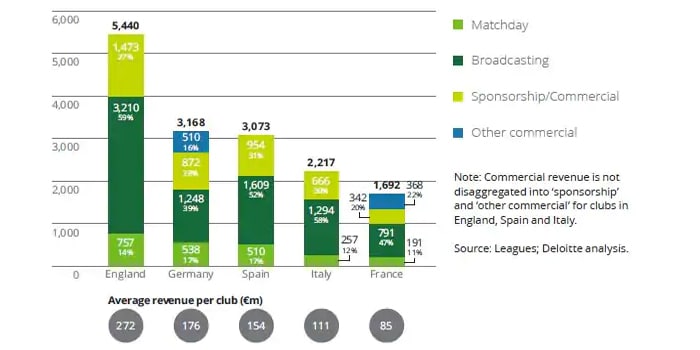 The average exchange rate for the year ending 30 June 2018 has been used to convert figures between euros and pounds sterling (£1 = €1.13).

Over the last 25 years Deloitte has developed a unique focus on the business of sport. Our specialist Sports Business Group offers a multi-disciplined expert service with dedicated people and skills capable of adding significant value to the business of sport. Whether it is benchmarking or strategic business reviews, operational turnarounds, revenue enhancement strategies or stadium/venue development plans, business planning, market and demand analysis, acquisitions, due diligence, expert witness, audits or tax planning; we have worked with more clubs, leagues, governing bodies, stadia developers, event organisers, commercial partners, financiers and investors than any other adviser.