“Pro-business,” but expecting more has been saved

“Pro-business,” but expecting more has been removed

Business as a force for positive change

Since 2013, when we first asked millennials about the impact business has on wider society, they have given overwhelmingly positive responses. This continues to be the case, with 76 percent now regarding business as a force for positive social impact. Again, we see “super-connected millennials” (89 percent) and “active citizens” (80 percent) to be among the strongest advocates of business.

With these two groups using significantly more social media or more actively engaging with social, environmental, or political affairs, it is a continuing source of encouragement that such millennials are pro-business. Indeed, both of these figures represent an increase since the last survey; we also observe a strong correlation between overall evaluations of business impact and levels of “social optimism.” Business and commerce might not be directly responsible for political and social progress, but among those expecting such improvement, fully 88 percent say business, in general, around the world is having a positive impact on the wider society in which they operate. Meanwhile, we observe that within all demographic groups (gender, age, parental status, business sector, size of employer, etc.), a majority believes that business has a positive impact on society. 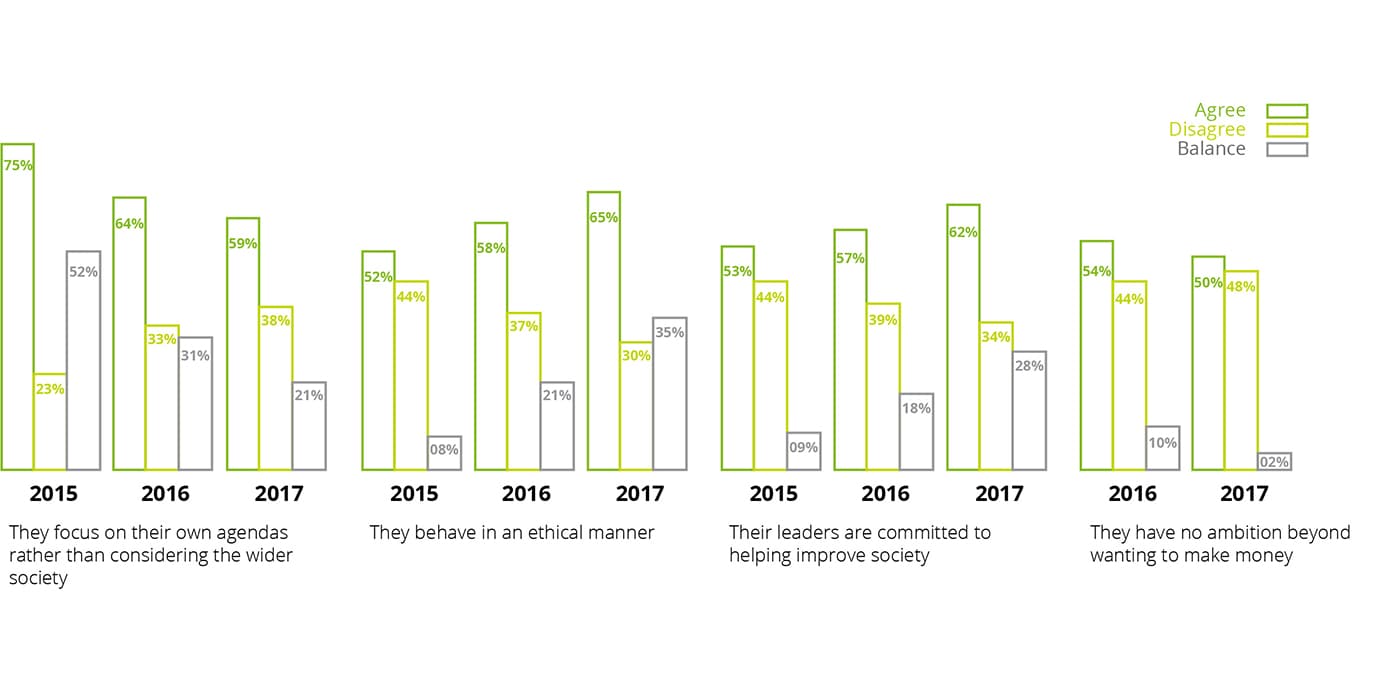 In addition to its overall impact, we also see continuing improvement in perceptions of how business conducts itself, with ratings on each of four measurements of business behavior increasing for the second consecutive year. As illustrated in Figure 4, more than six in 10 millennials (62 percent) consider business leaders as committed to helping improve society (a nine point increase since 2015). We see a still greater increase in the proportion agreeing that “businesses behave in an ethical manner” (65 percent, up 13 points). Meanwhile, criticism of business is diminishing, with a 16 point drop (since 2015) in the proportion saying that businesses focus on their own agendas (rather than considering wider society).

Given the preceding findings of this report, it should come as no surprise that business leaders’ commitment to helping improve society is thought to be lower in mature markets (51 percent) than in emerging markets (73 percent). It is in a by-now-predictable group of countries where perceptions are lower (Belgium, South Korea, Netherlands, Italy, and Switzerland) and where business leaders as a whole are possibly failing to demonstrate their commitment to social improvement.

Millennials see business as a broadly positive force that behaves in an increasingly responsible way. But, this generally positive evaluation is tempered when we consider the actual impact large enterprises are thought to make. As illustrated in Figure 5, large businesses are not thought to be fulfilling their potential to alleviate society’s challenges, while charities and local (smaller) companies are thought to be doing “as much as they can.” Six in 10 (59 percent) survey respondents believe multinational businesses have made a positive impact on the challenges millennials cited as their greatest concerns, e.g., economic and social progress, conflict, inequality, corruption, etc. However, this figure is significantly below those who believe such organizations have the potential to make a positive impact (74 percent). Overall, the impact gap (that between the potential and actual impact on issues of concern) stands at 15 points and is higher in mature markets (18 points) than in emerging markets (12 points). However, this difference is less pronounced than that seen for other questions, and we see countries from both “blocs” among those recording the greatest impact gaps (France, Belgium, Italy, Chile, Germany, Argentina, and Spain).

These findings echo sentiments expressed in our 2014 report. Then, we reported how a majority of millennials considered business to have the potential to address the economic, environmental, and social challenges of the time. In particular, they thought business could help with respect to: education, skills, and training; economic stability; cybersecurity; health care and disease prevention; unemployment; climate change; and unemployment. But, it was only for the first three that business was widely considered to be having a positive impact.

As Figure 5 illustrates, the potential of multinational companies to have a positive impact on issues of concern is regarded by millennials to be as high as that of individual countries, blocs of countries or global institutions such as the World Bank or International Monetary Fund. However, in the opinion of millennials, they are no more likely to have had a positive impact than are charities/advocacy groups, NGOs, or local companies. In contrast to multinationals and individual countries, both charities and local companies are thought to be exceeding their potential to address issues currently of concern to millennials. 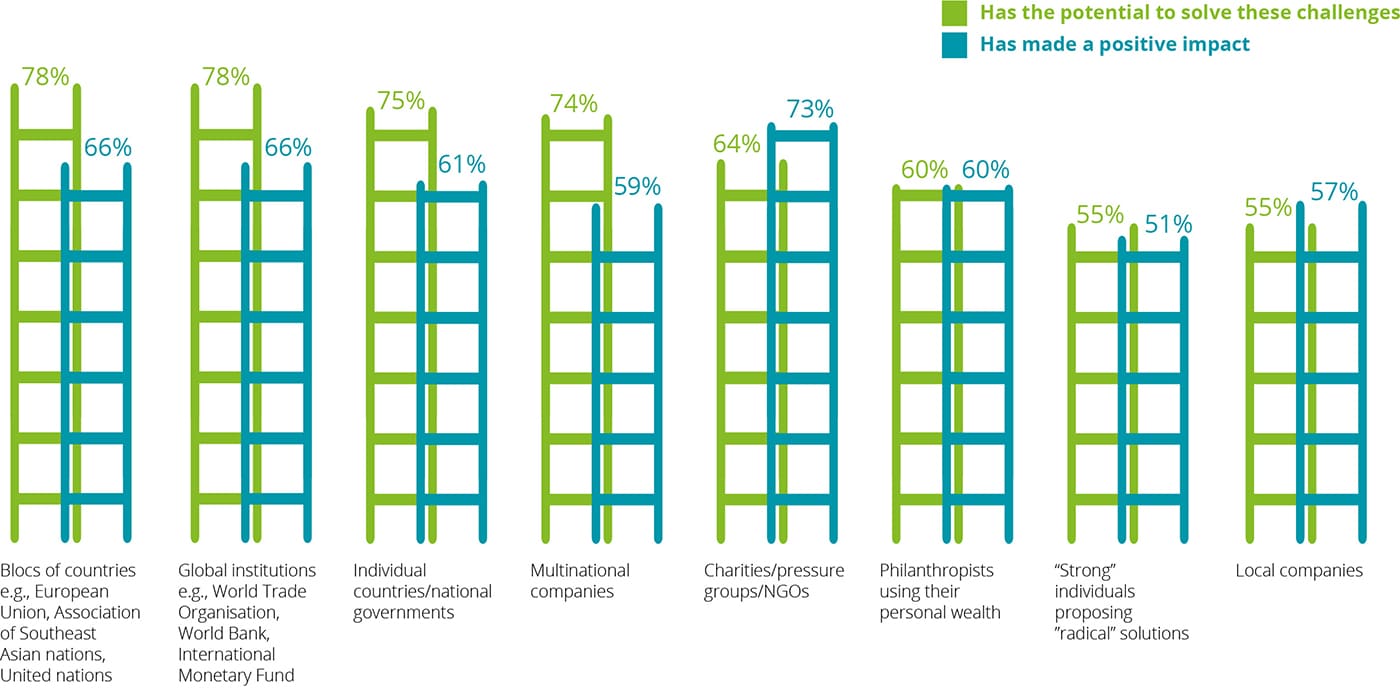 Figure 5: “Impact of business and national governments falling short of potential.” Click the image to view an enlarged version.

The idea that millennials consider local initiatives as a “better” alternative to the efforts of large, commercial organizations is supported by their responses to questions about business-government collaboration. Millennials are equally split between those saying the two are working well together (49 percent) and those saying they are not (48 percent). In certain markets, millennials believe they are working well together. This includes the US, Canada, Switzerland, Australia, and the UK. However, in Chile, South Korea, Japan, Mexico, Russia, Spain, and Italy, no more than a third rate business-government co-operation positively.

While millennials are equally split between those saying business-government collaboration is “good” and those considering it to be “poor,” they also are unsure as to who benefits from such initiatives.

Figure 6 shows only a quarter (27 percent) consider citizens/society to be the ultimate beneficiaries when business and government work together, while 15 percent believe all stakeholders gain. Together, this suggests that only a minority of millennials believe it is “the people” who benefit most when businesses and governments work together on society’s challenges.

The preceding sections suggest millennials regard business as holding back from full engagement with social issues. Businesses might argue that addressing wider social issues is not their primary reason for being, but millennials do expect businesses to do more than simply seek financial success. Moreover, those businesses that do engage in issues of concern to millennials are more likely to gain their trust and loyalty. 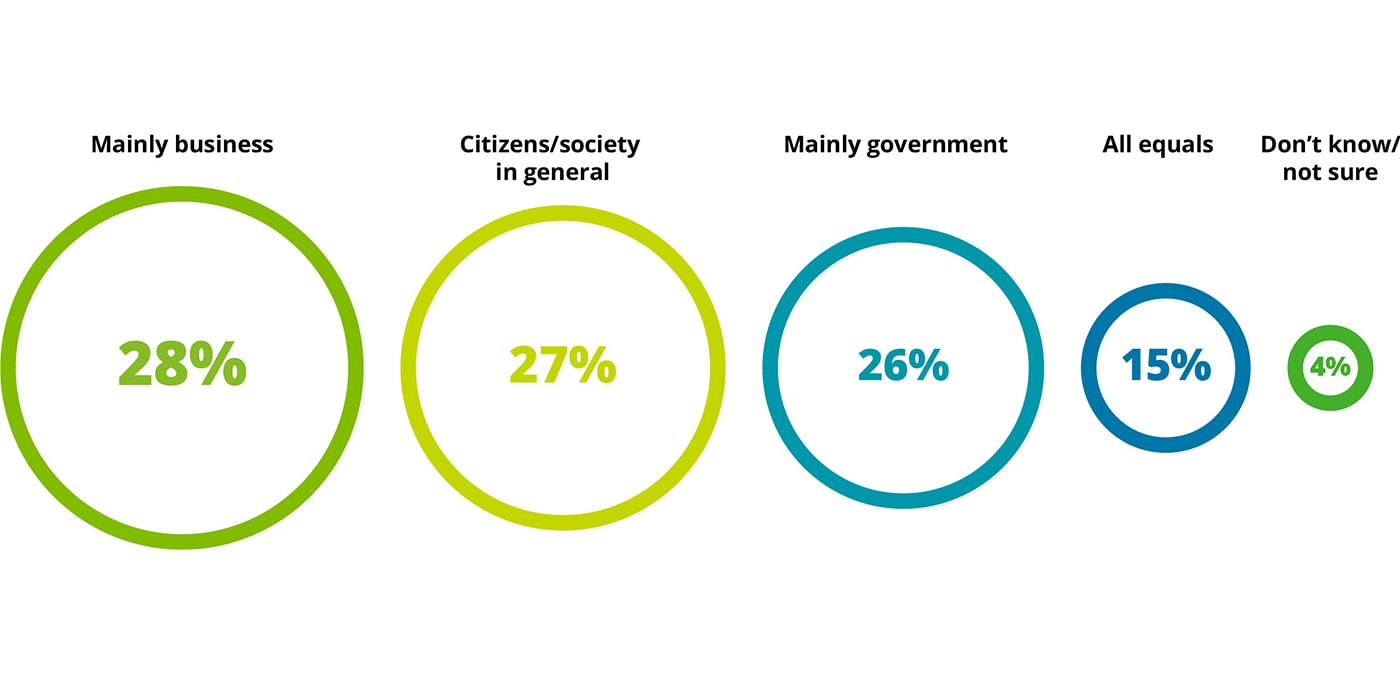 This year, as we have recorded in each and every one of our millennial surveys, almost nine in 10 (86 percent) believe the success of a business should be measured in terms of more than just its financial performance. It is, therefore, encouraging that the vast majority (82 percent) of millennials report their employers are directly involved in issues of personal concern, or are supporting charities and other social initiatives in the area. Such involvement is more prevalent in larger businesses with education, skills, and training being the areas of greatest focus.

Across organizations of all sizes, the most common issues with which businesses engage are education, skills, and training; unemployment; and health care/ disease prevention. However, businesses are possibly falling short of their potential to address the societal challenges that are most important to millennials. In particular, only 10 to 13 percent of respondents feel their organizations are addressing income inequality/ distribution of wealth, corruption within business or politics, or climate change and the environment. 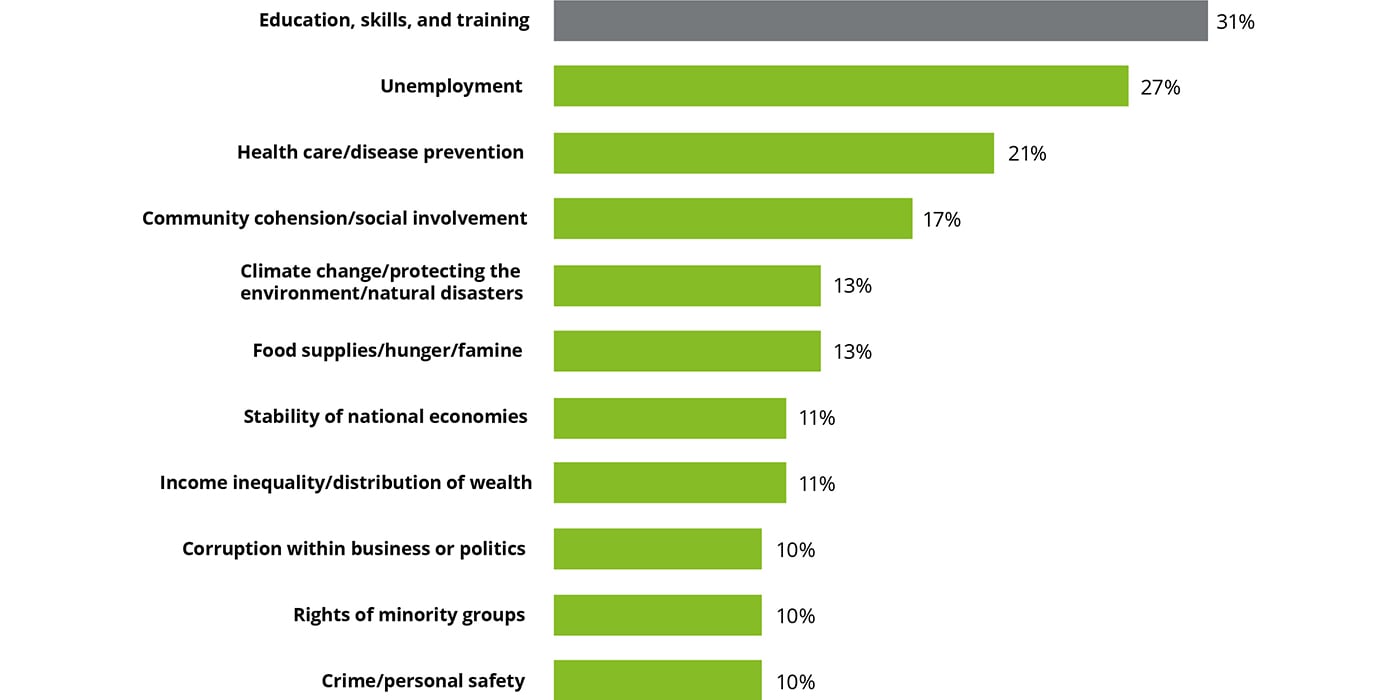 Figure 7: “Millennials' say their employers are most supportive of education, employment, and health care initiatives.” Click the image to view an enlarged version.

Of course, every issue can be considered worthy of support. The key point is that whatever the size of an organization or the issues with which it chooses to engage, there is a strong correlation with positive employee sentiment. For example, we see that millennials intend to stay longer with those employers that engage with social issues. Meanwhile, those most optimistic about their countries’ progress are more likely to report their employers as involved with wider social and economic issues.

Millennials are a little skeptical with respect to the motivations of large, multinational businesses that support charities or otherwise contribute to social initiatives. When asked to judge their motivation on a scale ranging from one (purely to improve their reputations) to 10 (genuine desire to change things for the better), the average score is 5.4. Fewer than four in 10 (36 percent) give a score of seven or more. The corresponding figures regarding the motivations of their own organizations are 6.5 and 55 percent.

This suggests larger businesses need to communicate better and involve people more if millennials are to look more favorably upon businesses’ corporate responsibility activities. It certainly seems to have significant impact when businesses give millennials the opportunity to get personally involved.

Just more than half (54 percent) of millennials are provided with opportunities to contribute to charities/ good causes in their workplaces. That is by either having opportunities to support the causes they care about most, or those they would not otherwise have gotten involved with. Such activities could be considered laudable in their own right, but the relationship to other findings is noteworthy. For example, those provided with such opportunities in the workplace show a greater level of loyalty, have a more positive opinion of business behavior, and are less pessimistic about the general social situation. 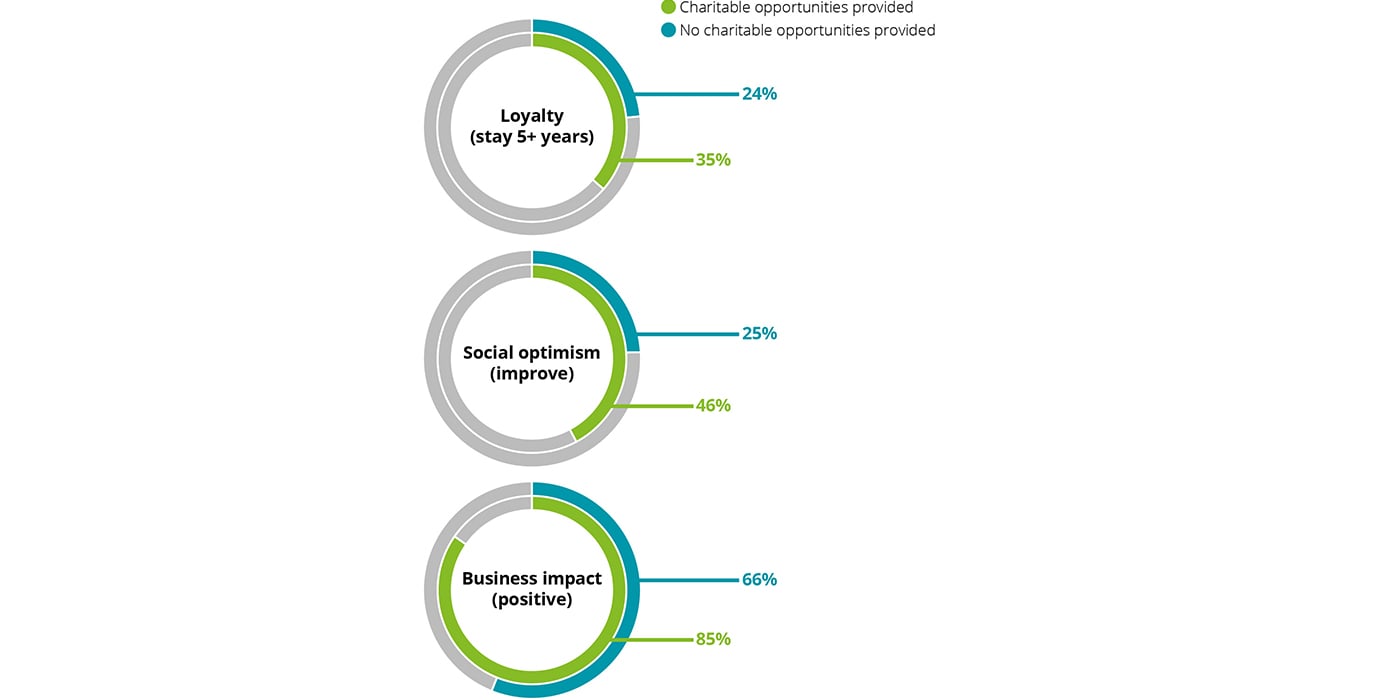