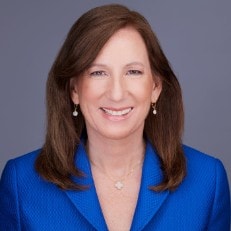 As CEO of Deloitte, Cathy Engelbert leads one of the largest professional services organizations in the United States with more than 90,000 professionals. Deloitte provides audit and assurance, tax, consulting, and risk and financial advisory services to the Fortune 500, private companies, and medium to small businesses. For more than 30 years, Cathy has had a distinguished career serving large and complex global clients and has served as a specialist in financial instruments. She previously led the US audit practice and is currently a member of Deloitte’s Board of Directors. Cathy is chair of the Center for Audit Quality Governing Board and, as a strong supporter of diversity and inclusion, the first woman to serve as chair of the Catalyst Board, a global non-profit organization that promotes inclusive workplaces for women. She is a founding member of the CEO Action for Diversity and Inclusion, vice chair of the Partnership for New York City, and member of the Business Roundtable, where she sits on the Education & Workforce and Immigration committees. She also serves on the steering committee of the Fortune CEO Initiative, is a member of the Council on Foreign Relations and—from a well-being perspective—is a member of the American Cancer Society CEOs against Cancer Global Council and American Heart Association CEO Roundtable. She is also vice chair of the Kennedy Center Corporate Fund Board and serves on the Accounting Advisory Board of Lehigh University. Cathy has been listed as one of Fortune’s Most Powerful Women for the last four years. She is ranked on Glassdoor’s annual Employees’ Choice Awards honoring the 100 Highest-Rated CEOs, and among Crain’s 50 Most Powerful Women in New York. Cathy has also been recognized as one of Working Mother magazine’s 50 Most Powerful Moms for the last three years and one of Fast Company magazine’s Most Productive People. Cathy regularly speaks to the media about global business trends, Deloitte’s growth strategy, and the new business reality—including the influence of marketplace shifts on the future workplace, as well as opportunities for advancing diversity and inclusion in corporate America.