Geographic trends in manufacturing job creation: Something old, something new

Geographic trends in manufacturing job creation: Something old, something new Behind the Numbers, September 2017

US manufacturing employment has reached a milestone—1 million jobs created since it bottomed at the beginning of 2010. While much of the job creation occurred in states with a substantial manufacturing base, some relative newcomers have also done well. But even with some recovery, the role of manufacturing as a job creator continues to decrease. 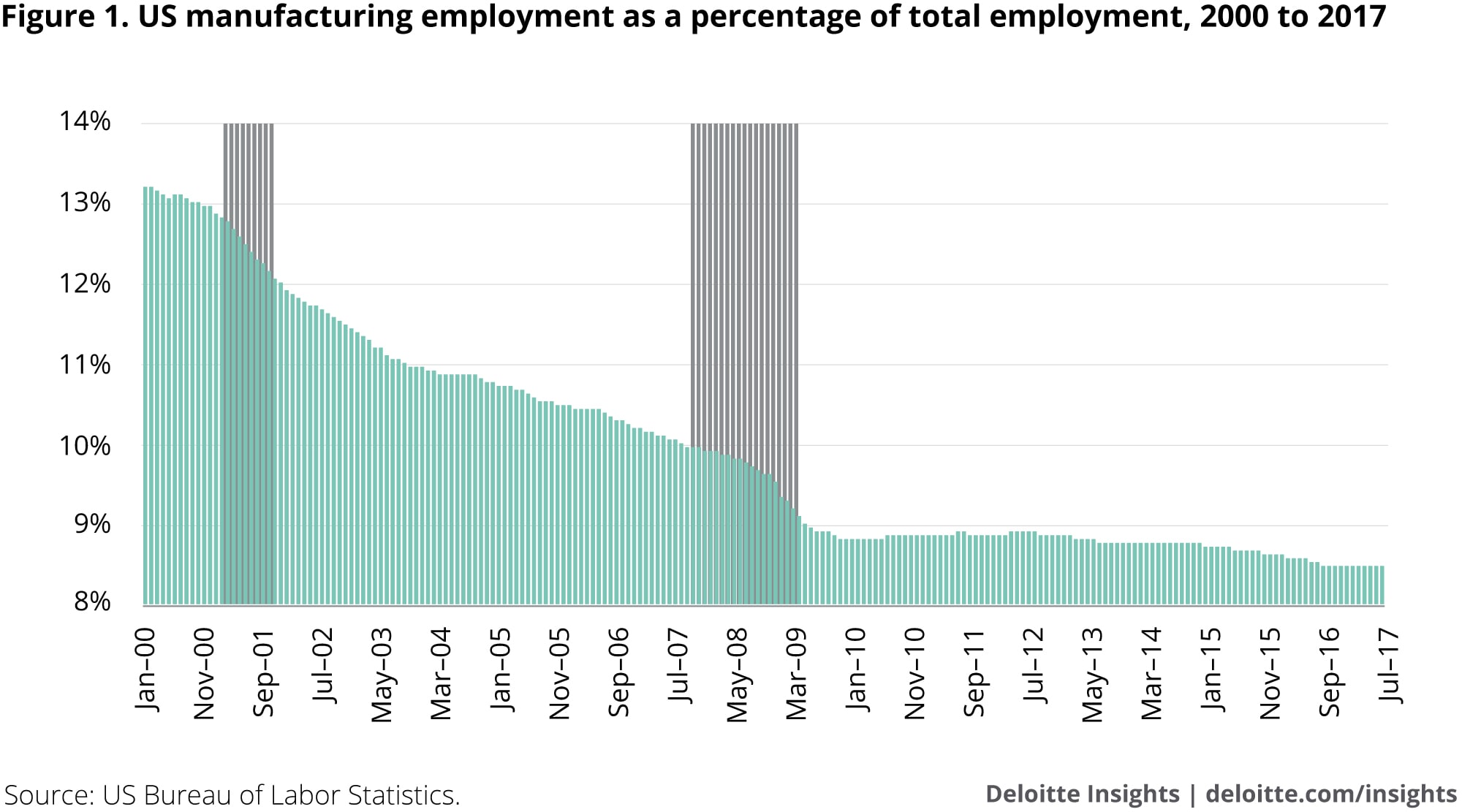 Manufacturing jobs in the United States: A state-level view

On a percentage basis, the 1 million rebound in manufacturing jobs is an 8.4 percent gain over the level of manufacturing employment in January 2010. So where have those jobs been created? Well, not only in the usual places where manufacturing has always been a major employer.

Figure 2 illustrates the unevenness of the manufacturing recovery. While some states continued to lose jobs post 2010 or experienced only a slight recovery, others saw a much stronger bounce. Michigan, in particular, experienced a very strong recovery, with manufacturing employment growing by 33.3 percent or 151,000 jobs between January 2010 and July 2017.2 Although this gain has boosted the proportion of manufacturing jobs in Michigan from 11.8 percent in 2006 to 13.8 percent currently, Michigan, just as every other state, has a lower proportion of manufacturing jobs than it did prior to the recession, when 15.0 percent of the state’s employment was accounted for by the manufacturing sector. Seven other states also showed percentage gains in manufacturing employment of more than twice the national average—Idaho (25.7 percent), Kentucky (21.9 percent), South Carolina (20.8 percent), Indiana (20.3 percent), Florida (19.3 percent), Oregon (18.9 percent), and Nevada (18.3 percent). 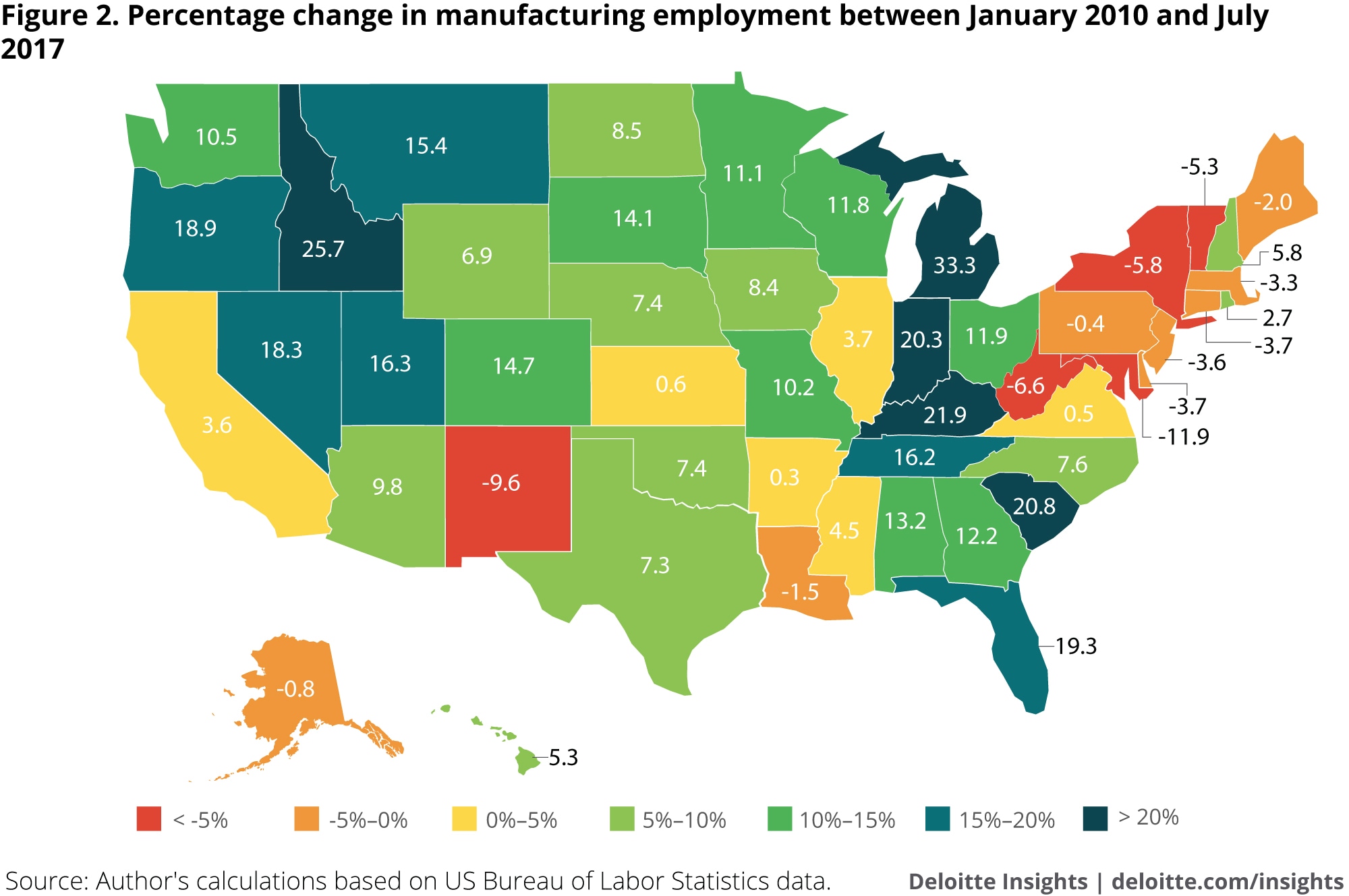 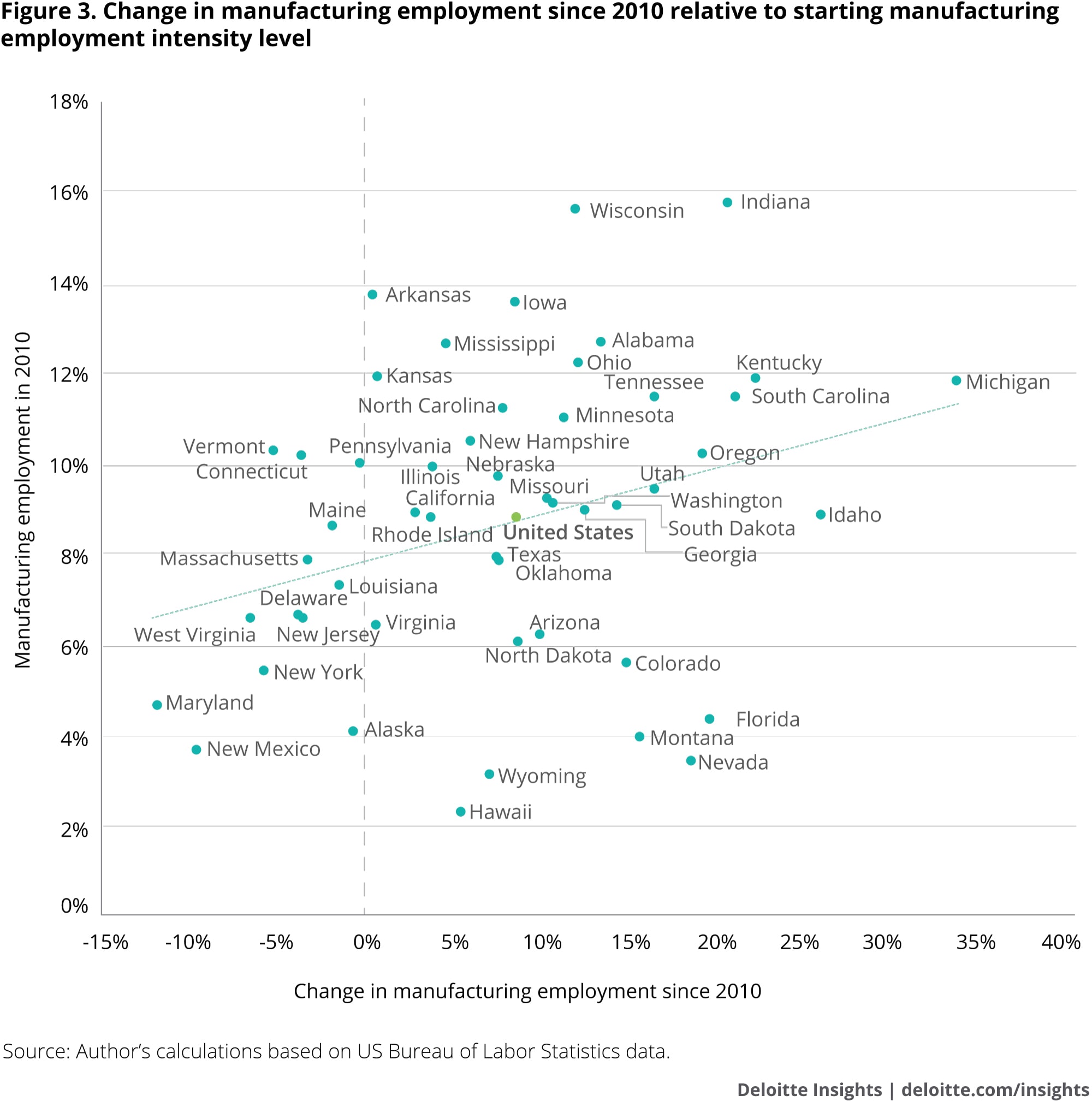 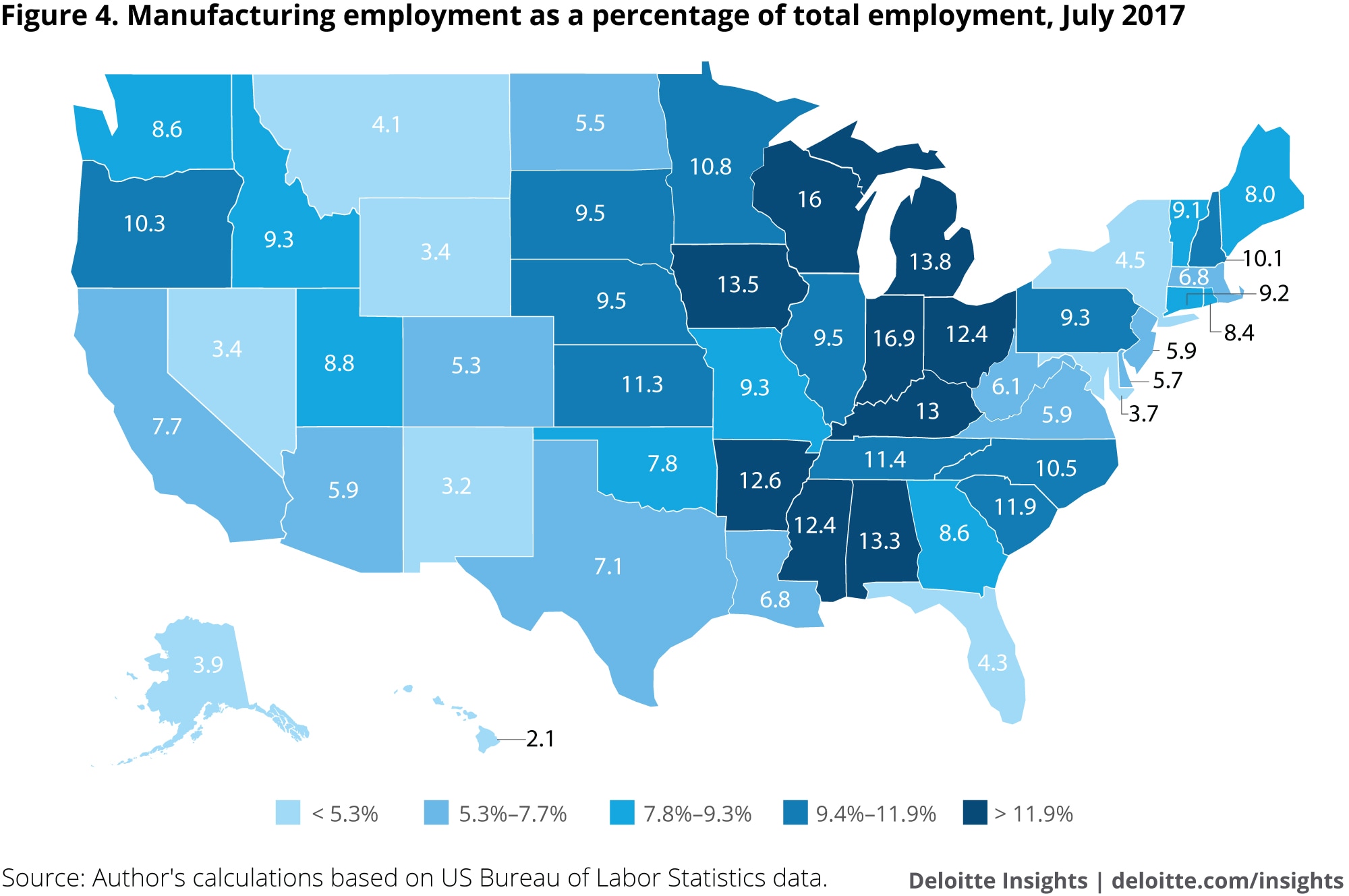 The United States is not unique in transitioning from an economy where job creation is highly dependent on the manufacturing sector. Many other countries are heading in the same direction. As shown in figure 5,4 in some cases the shift has been more recent and in others the trend began around the same time as the transition began in the United States in the mid-1980s. For most countries, the rate of decline appears to have slowed or leveled off. There are two anomalies among the countries shown: The proportion of industry employment in Mexico has remained fairly level since 2000 and in China, the decline only began in 2013 after a period of strong growth over the prior 10 years. 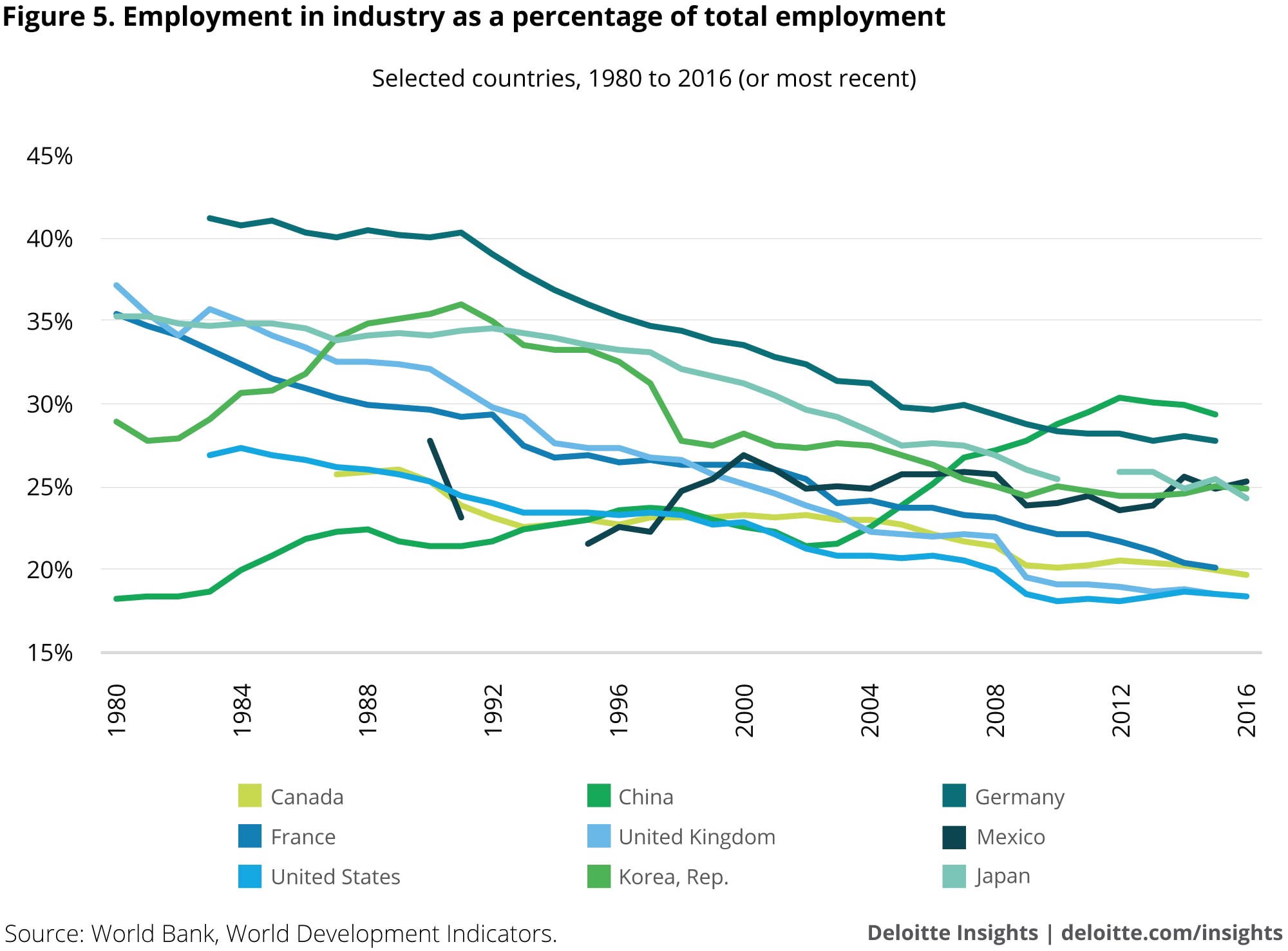 Shifts in manufacturing’s employment intensity is only part of the manufacturing story. The contribution that manufacturing makes to an economy can also be evaluated by many other measures, such as the absolute amount of manufactured goods that an economy produces and the value added by the manufacturing sector as a percentage of gross domestic product. In addition to the direct jobs and output generated by manufacturing—and, maybe more importantly, to the health and innovative capacity of an economy—is the role that it plays in driving research and development investment, creation of intellectual property, and generation of productivity growth. Furthermore, every manufacturing facility supports an ecosystem of additional upstream and downstream jobs in other sectors such as services, construction, mining, and agriculture, as well as other manufacturing jobs. Therefore, even though manufacturing’s employment intensity will likely continue to decline, it will continue to be a critical component of economic growth, not only in the United States, but in most economies around the globe.

Patricia Buckley is the director of economic policy and analysis at Deloitte Research, and is based in Arlington, Virginia.

The author would like to thank Dr. Peter Viechnicki for providing technical assistance.

Geographic trends in manufacturing job creation: Something old, something new has been saved

Geographic trends in manufacturing job creation: Something old, something new has been removed