Businesses are investing more in knowledge generation, but can private investment make up for less government investment?

As noted in last month’s “Behind the Numbers,” business investment in structures has remained within a relatively narrow band over the last 35 years, even as the two other components of investment—equipment and intellectual property (IP)—were growing faster than the economy overall. This month’s post focuses on the faster-growing of those two components, IP, a category that includes investment in software, research and development (R&D), and “entertainment, literary, and artistic originals.” IP investment plays a critical role in generating the innovation that fuels economic growth—a huge topic that we will save for another day. For now, the focus is on amount of the investment in IP. Business investment in IP occurs primarily at the developmental stage, while the federal government is the primary source of investment in basic research and development.1 But a possibly problematic disconnect has developed: even as private IP investment continues to rise, government investment has been falling. Since investment in the development stage builds on basic research, the question becomes, will slower government investment eventually erode the capacity of businesses to innovate?

Within IP, software replaced R&D as the largest category of IP investment in 2003 (see figure 1). However, the faster growth in R&D seen in recent quarters might soon reverse the order. In 2014, investment in R&D rose by 6.9 percent as compared to increases of 3.6 percent in software investment and 2.1 percent in the artistic category. In the first quarter of 2015, real R&D investment rose by an additional 12.4 percent (annualized). With some other GDP components, such as personal consumption and exports, showing weakness, this trend is a welcome vote of confidence in the US economy by the business sector. 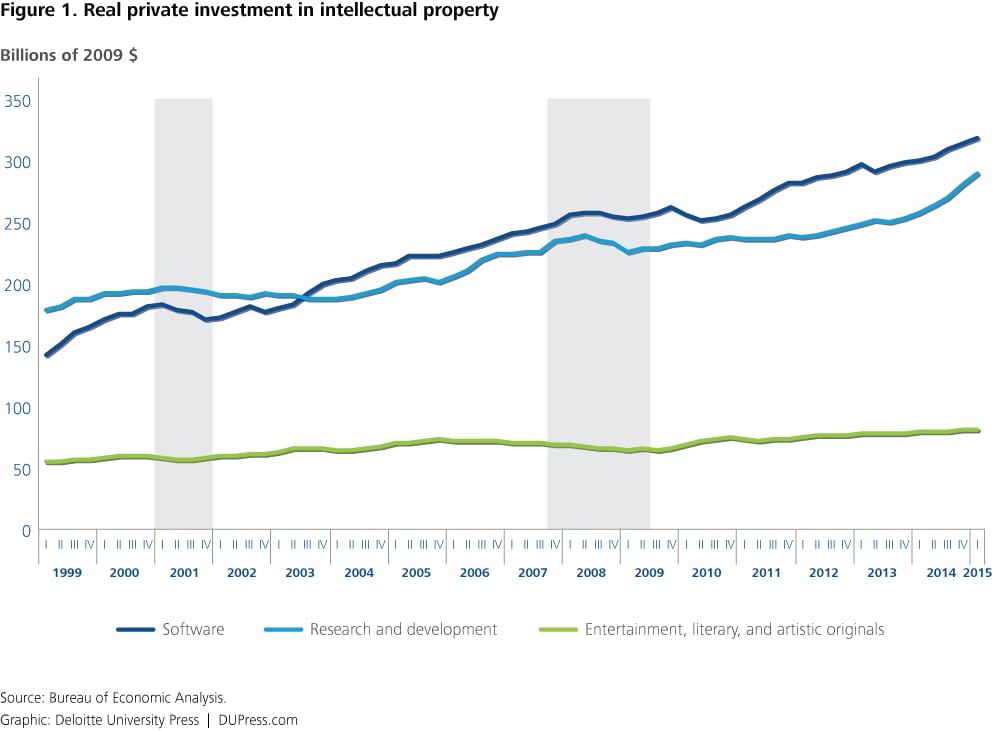 The entertainment, literary, and artistic originals are primarily movies, long-lived television programs, music and books, with movies and television accounting for over 75 percent of the investment in this category. 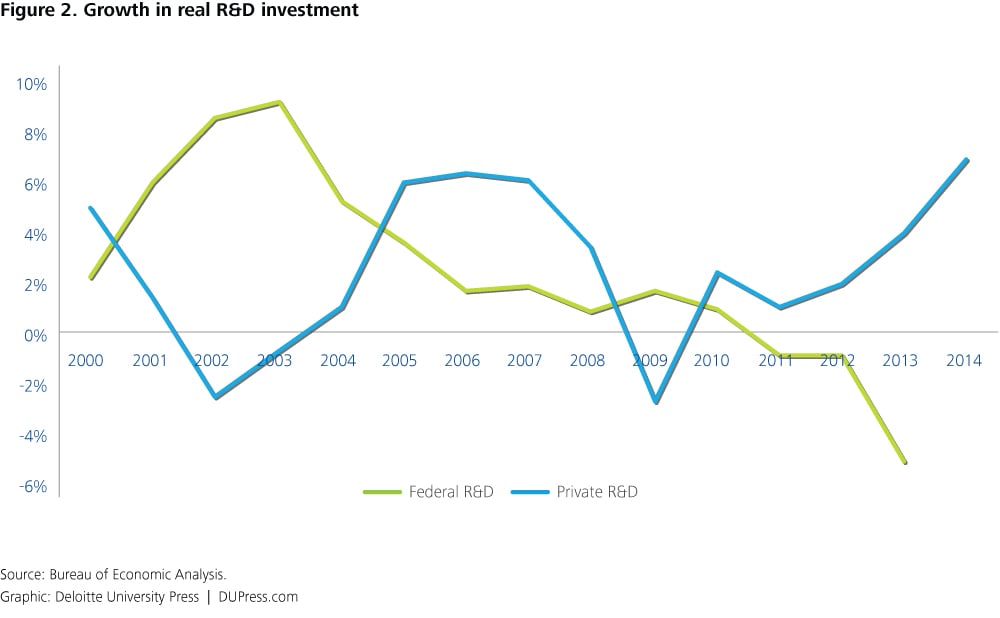 What are our competitors doing?

While direct international comparison are difficult because countries are only now moving to include capitalized R&D in their GDP statistics—the United States first did so only in 2013,5 looking at measures of R&D spending, the United States remains a world leader. In absolute dollar amounts, the US spends the most on R&D, although double digit spending increases by China is closing the gap: in 2010, China’s spending on R&D was equal to 52 percent of US spending. In just two years, China’s R&D spending was equal to 66 percent of US spending. Relative to GDP, US spending ranks high among the OECD countries, although countries including Israel, Korea, Japan, and the Nordics spend proportionally more.6

However even with stellar overall statistics, this is not the time for complacency given the pace of technological change. While budget deficits remain a concern, the United States should continue to make investments that will provide the building blocks for innovation going forward. Our economic future depends on it.

Behind the Numbers: US capital stock part II has been saved

Behind the Numbers: US capital stock part II has been removed

An Article Titled Behind the Numbers: US capital stock part II already exists in Saved items