Ring in the new: Holiday season e-commerce sales poised for strong growth Behind the Numbers, September 2016

Although classification issues make it difficult to find recent and detailed information on e-commerce sales, indications show it is growing fast. And in the upcoming holiday season, we expect e-commerce sales to grow 17–19 percent.

Figure 1. E-commerce sales and their share in total retail sales have been going up 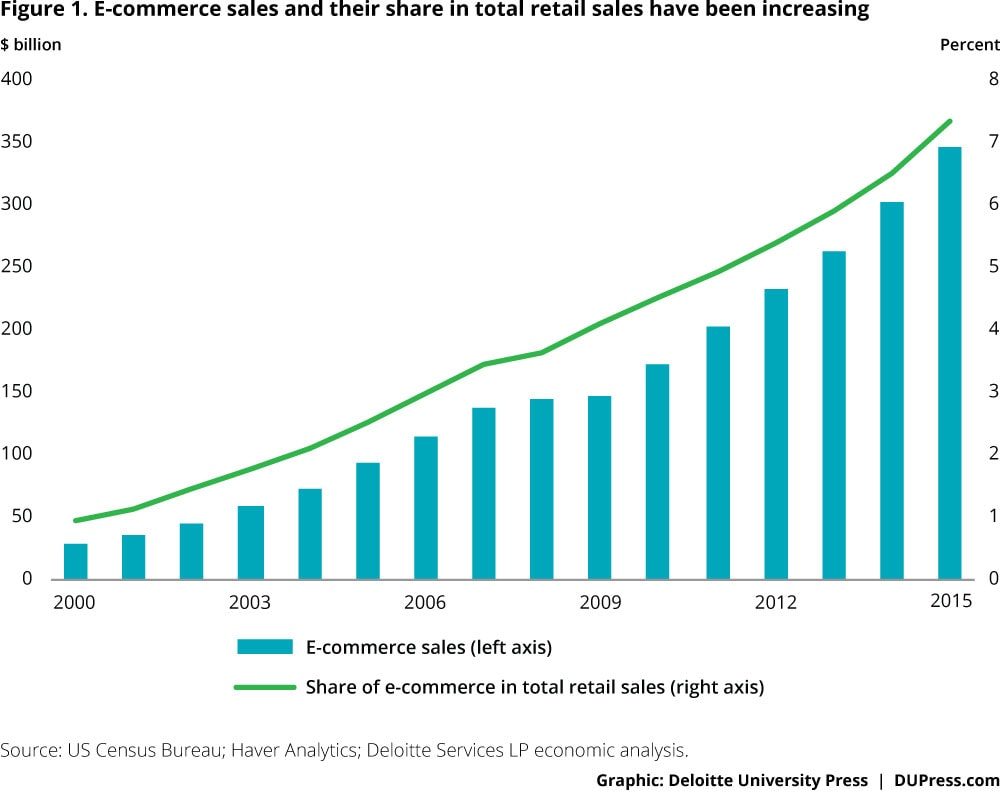 What does “e-commerce” mean?

The Census Bureau defines e-commerce sales as “sales of goods and services where the buyer places an order, or the price and terms of the sale are negotiated, over an Internet, mobile device, extranet, electronic data interchange network, electronic mail, or other comparable online system.”2 E-commerce sales represent a subset of overall retail and food services sales in the United States, which are calculated by the Census Bureau through a stratified random sampling of firms in the sector.

There are also some gaps in the data. Sales by certain store types are not available in some years, either due to high sampling variability or sales estimates being less than $500,000.4 E-commerce sales from gasoline stations (NAICS 447) is a good example of this. Moreover, the Census Bureau does not provide data on e-commerce sales at food services and drinking places (NAICS 722).

With all these caveats in mind, table 1 shows the major store types for retail and e-commerce sales, the NAICS codes for store types, and corresponding sales figures for 2014.

Table 1. Retail and e-commerce sales by store types for 2014 as reported by the Census Bureau 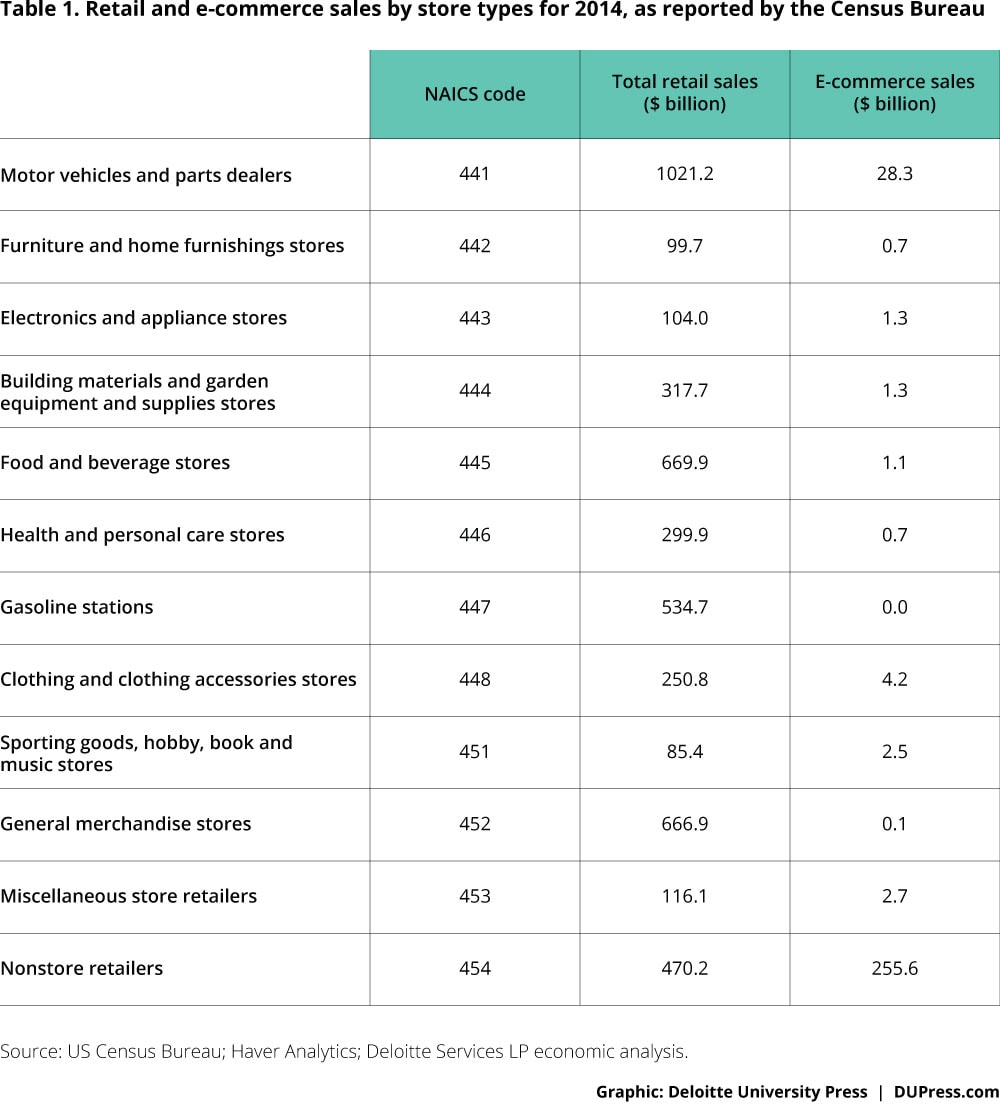 Our holiday season forecast: E-commerce sales to grow by 17–19 percent

Deloitte defines the holiday season as the period from November to January. For the purpose of the holiday season forecast, Deloitte defines retail sales as total retail and food services sales excluding sales at gasoline stations and motor vehicles and parts dealers. We exclude both from our definition of e-commerce sales as well. Given that the Census Bureau does not give figures for e-commerce food services sales, we also exclude that component in our definition of e-commerce sales.

The anticipated rise in e-commerce sales growth in the upcoming holiday season can likely be attributed to three factors: 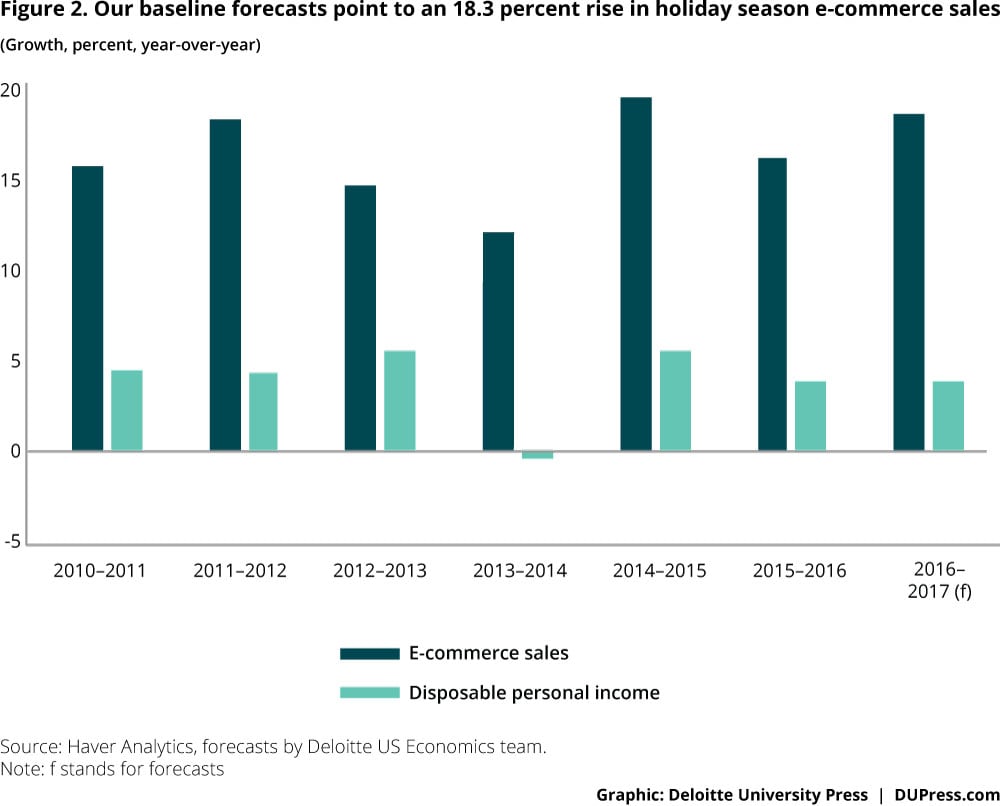 That said, several factors could negatively impact our forecast:

If our forecast holds, the continuing growth of e-commerce in the holiday season emphasizes a shift in consumer behavior to embrace e-commerce as a normal and expected method of shopping.

We started by estimating monthly figures for e-commerce sales by store types using annual data. To do that, we first calculated, for each store type, the share of its e-commerce sales in its total retail sales. For example, for electronics and appliance stores, we calculated their e-commerce sales as a share of their total retail sales. Next, we checked trends in shares for each store type. We found that store types differed in the time periods over which trends are visible. Clothing and clothing accessories stores, for example, displayed a trend over 2007–2010, while for miscellaneous store retailers, the trend period was 2008–2014.

Using annual change in shares for each store type over its trend period, we projected shares for 2015 and 2016. For a few store types, we used 2014 shares for the next two years, given the absence of any trends (see table 2). 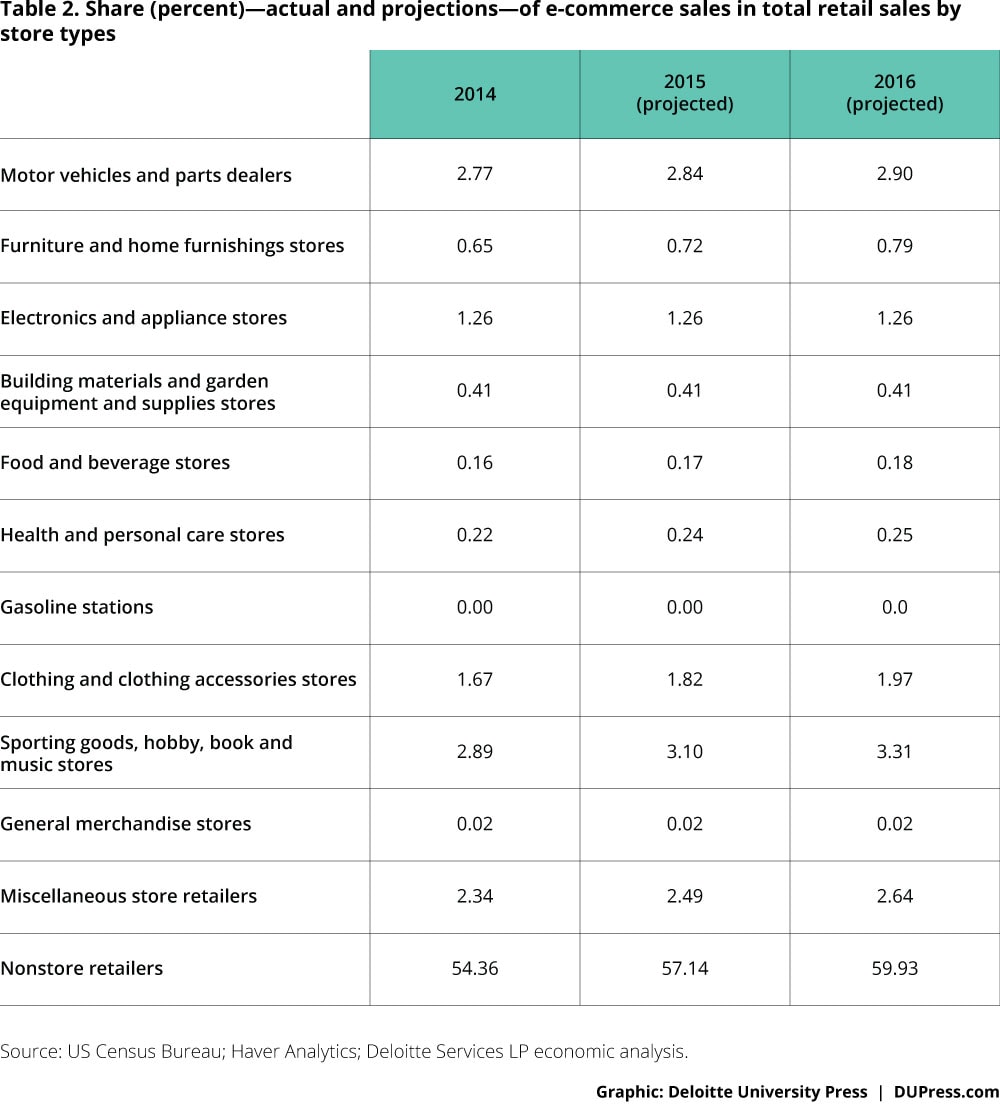 Economic theory provides us with a rich set of models to analyze retail sales. We tested a number of key variables for forecasting ability using a holdout period of 2011 to 2014, and found that a simple model of spending based on disposable personal income forecasted at least as well as more complex models. We ran the same tests for both forecasts—aggregate holiday season retail sales and e-commerce sales. We started with an error correction model (ECM) for both sets of forecasts. While the ECM worked well for the holiday sales forecasts, we found out that for e-commerce sales, a distributed lagged model gave us better results. The model that forecasts e-commerce sales uses current and three-month lags of disposable personal income as the explanatory variables.

eCommerce , Behind the Numbers , Retail & Distribution

Ring in the new: Holiday season e-commerce sales poised for strong growth has been saved

Ring in the new: Holiday season e-commerce sales poised for strong growth has been removed