Household debt Behind the Numbers, April 2014

An overall increase in household debt levels signals a movement toward more normal lending patterns with one major exception: the explosive growth in student loan debt.

The most recent Quarterly report on household debt and credit from the New York Federal Reserve Bank brought the welcome news that lending to households finally started to increase in 2013. The fourth quarter of 2013 saw the largest increase in total consumer indebtedness since 2007 and the first four-quarter increase since late-2008 in total outstanding debt.1 This is positive news in that it reflects the ability and willingness of individuals and families to invest in longer-lived assets such as homes, autos, and education. However, the changing composition of household debt due to substantial increases in student loan debt raises concerns.

As shown in figure 1, consumers began reducing their debt levels as unemployment rose and the value of houses in many areas of the country plummeted during the recession that began in December 2007 and lasted through June 2009. Some of the debt reduction was voluntary as consumers cut back on spending, but some of the contraction was involuntary reductions stemming from foreclosures and other types of default. It has only been in the last couple of quarters that debt has begun to increase. 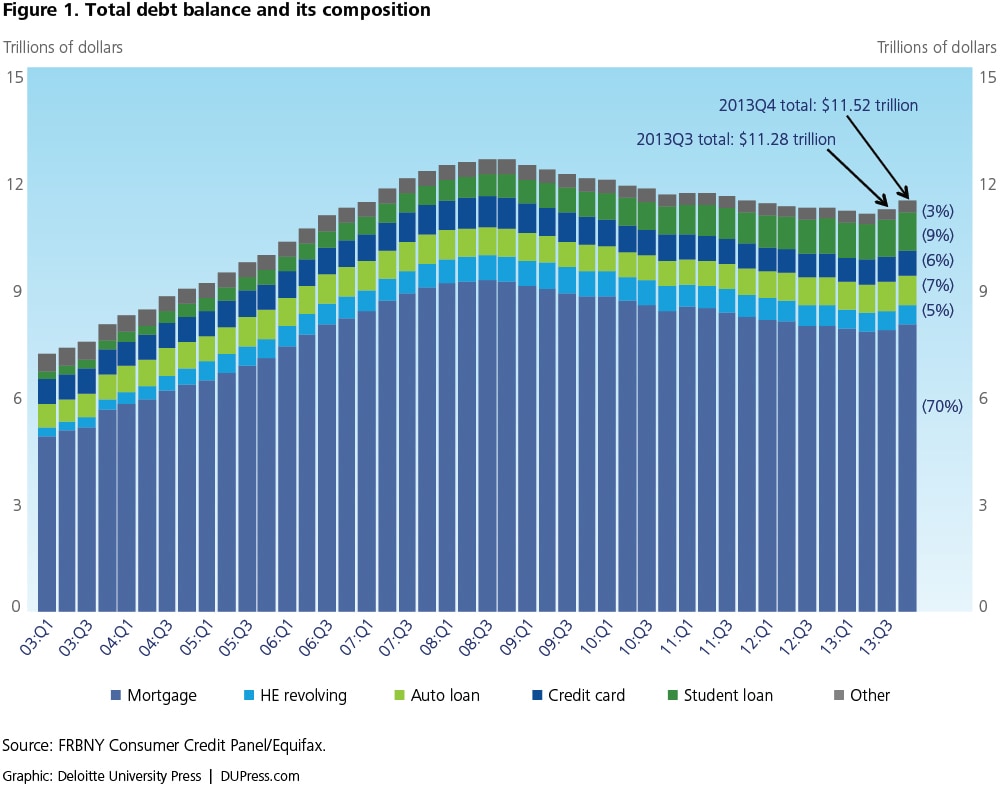 Mortgages are the largest component of household debt. The calendar year 2013 ended a four-year streak of year-over-year declines as mortgage balances increased on net by $16 billion. Auto loans were also up for the year, increasing by $80 billion. Credit card debt was up only slightly ($4 billion), and revolving home equity loans declined by $34 billion. However, the largest change in 2013 was in student loans, which increased by $114 billion.

To take a longer-term view, table 1 provides a comparison of household debt prior to the start of the recession with the current situation. In nominal dollars, overall debt remains 7 percent below its prerecession level, with mortgage debt alone currently over a trillion dollars lower than it was in the fourth quarter of 2007. Student loan debt is the only category that consistently increased in size during and after the recession. This doubling of student loan indebtedness moved this category of debt from the fifth largest at the end of 2007 to the second-largest category of debt after mortgages in 2013.

This rise in student loan debt is particularly troubling since it is the only category of loans where delinquencies are also increasing. Figure 2 shows that in the aftermath of the recession, serious delinquencies—balances being 90 days or more in arrears—in mortgages, revolving home equity loans, auto loans, and credit cards have fallen, but only credit card delinquencies are near their prerecession levels. Balance figures that show rising delinquencies in student loans confirm the findings of the Department of Education, which calculated that the three-year default rate rose from 13.4 percent for FY 2009 to 14.7 percent for FY 2010 in federal student loans.2 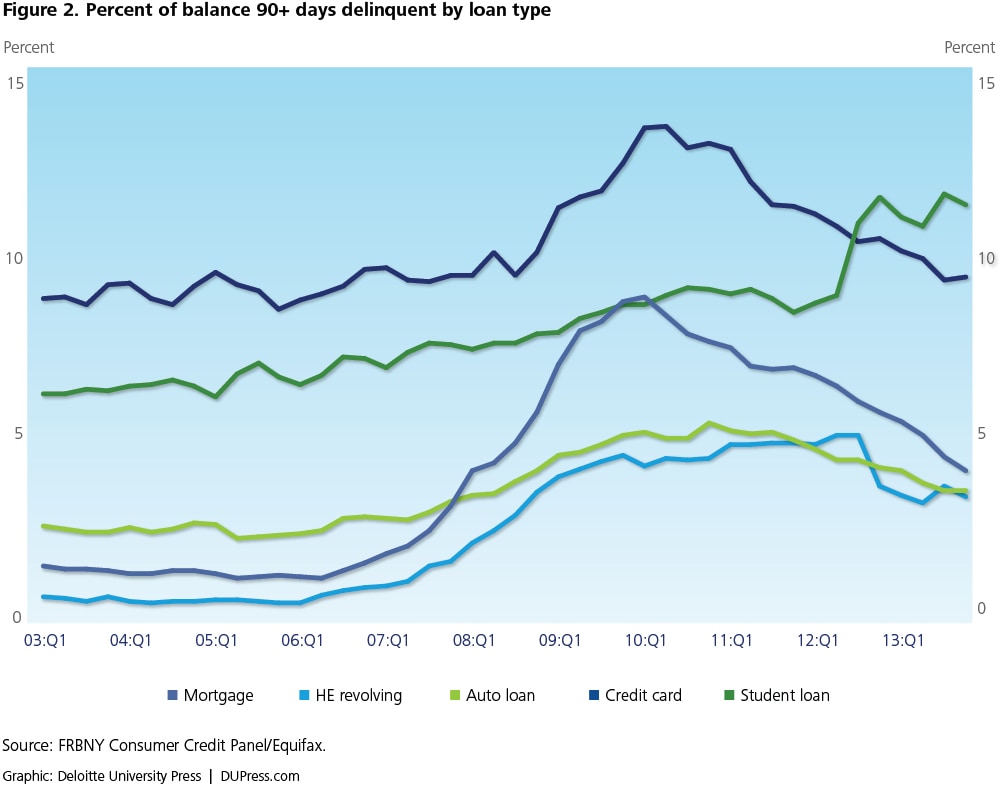 With lenders of all types requiring higher credit standards, the rising delinquencies of student loans, most of which are made to those just starting their careers,3 may have serious repercussions not only for the individuals impacted, but for economic growth going forward, as these individuals are limited in their ability to finance major purchases.

Household debt has been saved

Household debt has been removed