Macroeconomic implications of the Affordable Care Act Behind the Numbers, March 2014

The Affordable Care Act (ACA) is a significant change in the US economy’s institutional framework. This FAQ examines the evidence for the direction and size of the impact on the ACA on overall economic activity in the United States. It does not consider whether the ACA will achieve its goals or how it might affect health care delivery and outcomes.

Q: What are the channels through which the ACA might affect GDP growth?

A: The ACA will affect GDP growth by reducing the supply of labor, as documented by the Congressional Budget Office (CBO), which would tend to reduce GDP growth. It might also increase GDP growth by reducing labor costs, if it succeeds in improving innovation and productivity growth in the health care sector. The ACA may also increase GDP growth in the short run by increasing the demand for health care goods and services. Overall productivity may increase if labor costs rise and businesses substitute capital for labor.

Q: Could the ACA create a recession or a significant slowdown in growth?

A: This seems very unlikely. The possible impacts—positive or negative—of the ACA are small compared to recession-creating events such as the Lehman collapse, the bursting of the stock market bubble in 2001, or the rise in oil prices in 1973. In addition, economic actors can anticipate many of the changes required by the ACA, and these changes take place gradually. This means the adoption of the ACA will not come as a sudden shock of the type that often generates recessions.

Q: Have economic forecasters lowered their forecasts because of the ACA?

A: From a macroeconomic perspective, the ACA was not large enough to affect GDP growth forecasts. Figure 1 compares the CBO forecast for real GDP before (January 2010) and after (August 2010) the passage of the Act. The CBO reduced the GDP growth rate forecast in 2012 (before the ACA was scheduled to have an effect), but the impact was rather small. Later CBO forecasts in 2011 and 2012 show a substantial decline in projected GDP growth in 2013, but the CBO explains this as the result of expected fiscal tightening (specifically, the removal of the 2001 and 2003 tax cuts and the elimination of extended unemployment benefits), which are larger events from the macroeconomic point of view. 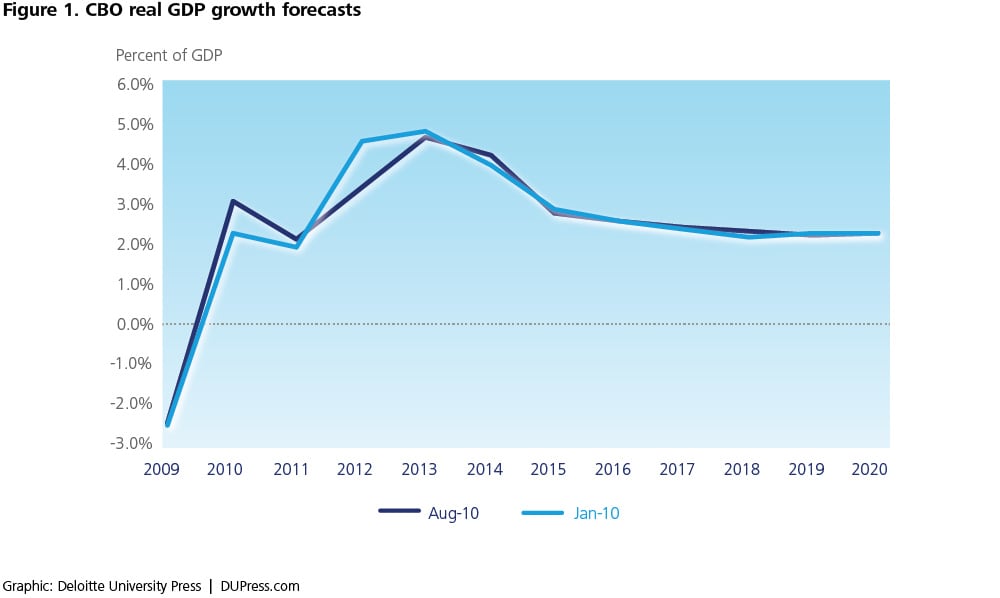 Q: How much will the employer penalty on uninsured full-time workers affect firms’ demand for labor?

A: The Kaiser Family Foundation estimates that about 30 million full-time workers do not have health insurance. It is only the employers of these workers that face the penalty, although it is possible that some companies will prefer to pay the penalty rather than continue to insure their workers.

The penalty may be substantial. University of Chicago economist Casey Mulligan calculates the effective cost of this penalty at about $4,500 per worker per year.1 The tax applies only to companies with more than 50 workers, and only for those who work above a 30-hour weekly threshold. Some companies may also find that insuring their workers is cheaper than paying the penalty. This is particularly true for small firms that receive a tax credit when they insure their workers.

Because the penalty is per worker, it amounts to a larger tax on lower-paid workers (who are less likely to be insured). The impact of the penalty will therefore be felt most heavily in demand for lower-paid, less-skilled workers.

The CBO argues that the penalty will eventually be transferred to workers in the form of lower wages, and it will therefore not affect the demand for labor (except in certain cases, such as minimum wage labor). Therefore, the CBO includes the impact of the penalty in its estimates of the effect of the ACA on labor supply, rather than labor demand.2

Q: How will the ACA affect the labor supply (the amount people wish to work)?

A: The CBO has done careful estimates of impact of the ACA on the supply of labor. The CBO estimates that hours worked will fall 1.5–2.0 percent because people may choose to work fewer hours or to exit the labor force. Because the labor impact will fall on low-paid workers, the impact on labor consumption is a lower 1.0 percent.3 The ACA creates the following incentives to reduce work effort:

The CBO estimates the impact to be a reduction in total hours worked. How much of this fall will be reflected in employees working fewer hours, and how much in a reduction in the number of those employed, cannot be estimated at this time.

A: There would seem to be a clear incentive for firms that do not offer health insurance to offer more part-time work to avoid the penalty. However, data do not indicate that there has been an unusual growth of part-time employment yet. Figure 2 shows the share of part-time workers in the total labor force. It fell substantially during the recession, but it has been growing at a rate that is consistent with previous recoveries—although it is still very low. Figure 3 shows the share of part-time workers who are part-time for “economic reasons,” which essentially means they would prefer full-time work. This jumped from a relatively low 20 percent before the recent recession to above 30 percent, but it has been dropping. Although the level remains high, the rate of decline seems consistent with the economic recovery.

Both the CBO4 and the San Francisco Fed5 have concluded that there is not yet evidence that the ACA had a significant impact on the share of part-time workers. 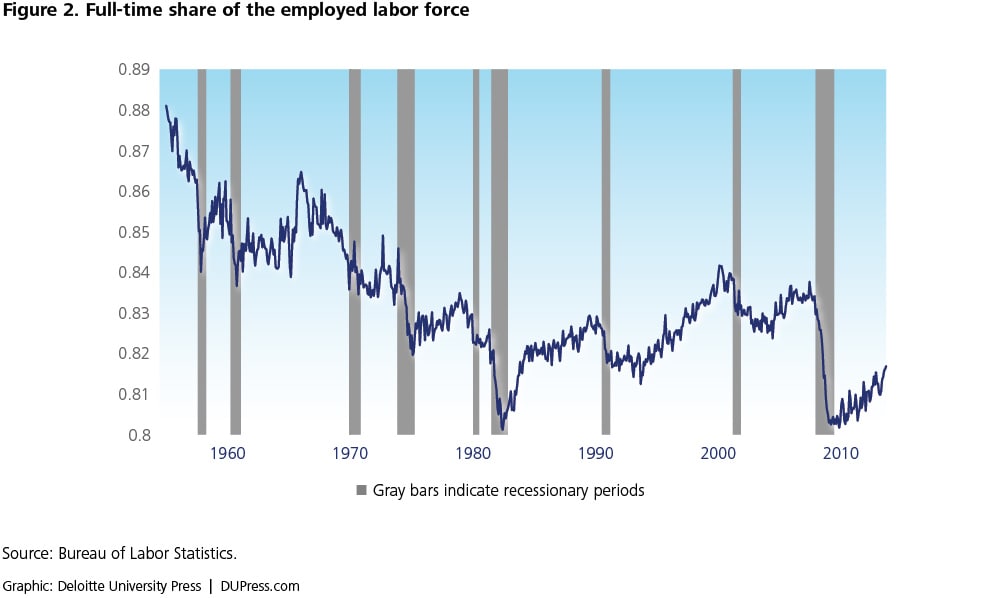 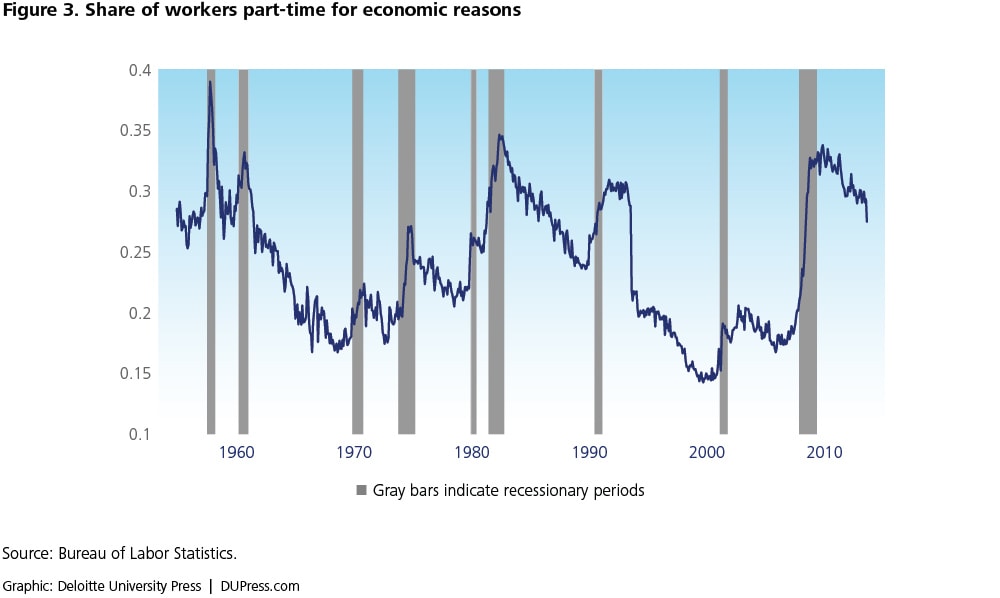 Q: Could the ACA have a positive impact on economic growth?

A: The ACA may reduce the rate at which health care and health insurance prices rise, and therefore reduce the cost to businesses of adding employees. The lower cost of employment might lead to faster job growth. Harvard University economist David Cutler6 claims that the reduction in health insurance costs could amount to an additional 250,000–400,000 jobs each year over the next decade. (For comparison, the economy created an average of about 2 million jobs per year in the last three years.) Following the CBO’s assumptions, the lower cost of employment might lead to higher wages and additional labor supply, offsetting the negative impact of ACA on labor supply.

Q: Could the ACA’s impact on the supply and demand for health care be large enough to directly affect the economy?

A: By making health care more accessible to more people, the ACA may expand the demand for health care. Since the economy is currently at less than full employment, additional demand from any source, but certainly from health care, will be welcome. On the other hand, if the ACA succeeds in reducing unneeded testing, procedures, and drugs, demand for health care might fall, helping to drag recovery. It’s not possible to estimate the possible impacts of these factors, but the fact that they offset each other suggests that the direct impact of the ACA on health spending and on the economy as a whole will be relatively small.

Behind the Numbers , Economics , Health Care

Macroeconomic implications of the Affordable Care Act has been saved

Macroeconomic implications of the Affordable Care Act has been removed