For more companies, new ways of seeing Momentum is building for augmented and virtual reality in the enterprise

Can managers convince workers to don awkward headsets and embrace the possibilities of augmented and virtual reality? An ever-wider range of businesses are finding applications for AR/VR technology, aiding workflow, collaboration, and productivity in sectors you might not expect.

Momentum is building for augmented and virtual reality in the enterprise

Wearing a computer screen on your face seems like something only a gamer or tech enthusiast could love. But headsets, and other devices that create mobile virtual or augmented reality experiences, are showing up in places other than labs and gaming centers. Big companies far outside the world of consumer entertainment are testing and deploying augmented reality and virtual reality (AR/VR) equipment in a wide range of work-related applications, and improving capabilities are inspiring more potential uses. The technology is getting so effective—and sufficiently user-friendly—that more companies should consider incorporating AR/VR solutions into their workflow.

What is augmented and virtual reality?

Virtual reality (VR) and augmented reality (AR) technologies have been around for quite some time,6 yet many remain unclear about the differences between the two. We define these concepts as follows:

Virtual reality: a technology that allows a user to perceive and interact with a simulated environment. The environment may be either realistic or fanciful.

Augmented reality: a technology that overlays information onto a user’s field of view as she perceives the real world. The information typically informs the user about an object or place at which she is looking.

Mixed reality: technically a subset of augmented reality, this technology enables the perceived merging of real and virtual worlds to produce new environments and visualizations in which simulated digital objects and information and real objects can co-exist and interact with one another.

Users experience AR/VR via a variety of types of hardware, including common mobile devices such as smartphones and tablets, smart glasses, and head-mounted displays. Smart glasses typically look like oversized spectacles and can either be monocular, in which information is displayed over one eye’s field of view, or binocular, in which it is projected over both. Head-mounted displays are headsets designed to provide the most immersive experience possible. Some are tethered via wire to a physical computer to draw upon the immense computing power required to render immersive environments, which limits their mobility.

A growing number of enterprises—even those outside of gaming and other consumer entertainment subsectors—are testing and adopting AR and VR technologies. Last year, Deloitte suggested that the time had arrived for enterprises to begin experimenting with the technologies.7 Many companies have since begun to test and deploy the technology, and our conversations with hundreds of executives have surfaced strong interest in AR/VR.

Our analysis of more than 150 AR and VR pilots and deployments suggests that they can be grouped into four categories.

Workers in factories and warehouses, along with those who perform service in the field, can benefit from AR/VR devices that streamline workflow by providing access to hands-free information while completing a manual task, such as maintenance or repair. Smart glasses or head-mounted displays can overlay instructions, maps, system information, or real-time feedback over a worker’s field of view. Some of these applications also offer the ability to collaborate with colleagues from remote locations who can see what the user sees and can guide him to troubleshoot any issues.

Guidance and collaboration applications can be found in sectors such as aerospace, process and discrete manufacturing, and oil and gas. The goal of these applications is to increase worker productivity or accuracy by reducing time spent accessing and cross-checking data, or consulting with teammates for advice. In some cases, productivity increased the first time workers used the technology.8  Companies hope that the hands-free access to information and remote collaboration offered by AR/VR can reduce the risk of error, injury, or fatigue.

AR/VR also lends itself well to applications in education and training, including therapies that train patients how to cope with conditions such as post-traumatic stress disorder (PTSD), to manage their pain, and to engage in rehabilitation. For these applications, organizations generally employ head-mounted displays to immerse users in virtual environments that simulate real-life scenarios. We see exploration in health care and higher education and deployment in industrial and consumer products.

These applications may allow organizations to train staff at lower cost and reduced risk.11 The technology may also help learners retain more information than traditional training methods: In one test, surgeons retained approximately 80 percent of training material presented via VR compared to 20 percent when listening to a lecture.12

Japan Airlines is experimenting with training co-pilots in a virtual cockpit.13 California and Florida public schools have deployed VR to send students on virtual field trips,14 medical schools are experimenting with teaching surgical techniques on simulated cadavers,15 and University of Southern California researchers are exploring the technology’s use in reliving traumatic memories to help veterans better cope with PTSD.16 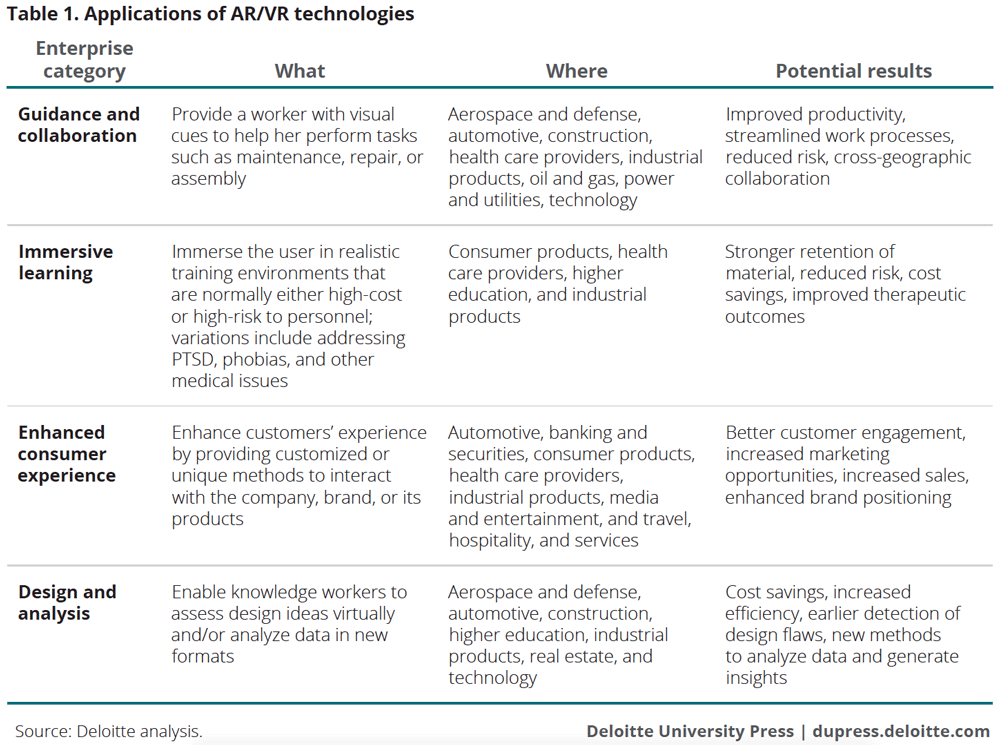 Innovative marketers are deploying AR/VR technology to enhance customers’ experiences with their company, products, and brand, particularly in the adtech, martech, and commerce spaces, which some analysts expect will account for a significant share of AR/VR revenue over the long term.17 Applications typically allow customers to virtually interact with brands to visualize and tailor products to their preferences. Companies exploring AR/VR for consumer experience can be found in the automotive, banking, consumer products, retail, and travel and hospitality sectors.

One example of this application of AR/VR is Sephora’s Virtual Artist tool, which allows consumers to sample makeup without physically touching the product. Using a customer’s smartphone camera, the app can project various shades of makeup on an image or video of her face and will even stay in place if she moves the camera around.19 Several real estate companies are experimenting with VR prototypes that allow customers to remotely view properties, both built and planned, more comprehensively than via online photos.20 Other companies are boosting their marketing efforts by tapping into consumer-facing AR/VR applications, such as PokemonGo, to physically guide customers to the company’s location, a strategy that has sometimes increased sales.21

Because AR/VR enables designers to model and test detailed virtual prototypes without physical construction, it can cut development time, reduce production costs, and yield better products by increasing understanding earlier in the process. For example, BMW has deployed VR to design and prototype virtual automobiles, making the design process faster and cheaper, while NASA is using AR/VR to design the next Mars Rover.22

As we’ve seen, a good number of organizations are already exploring enterprise applications of AR/VR. As the technology continues to improve, the case for testing, adoption, and deployment will become stronger. Here are some indicators that can help determine the right time to dive in.

Computational power: AR/VR requires substantial computing power to create high-quality graphics, reduce lag between a user’s movement and the display’s response, and increase the visual frame rate to more than 90 frames per second (FPS), a rate that won’t induce motion sickness. The development of dedicated processing units that can increase computing power and speed, while reducing power consumption, will allow AR/VR hardware to do more.

Battery life: Many guidance and collaboration applications will remain impractical until the batteries in AR/VR headsets can last an entire work shift—at least eight to ten hours. Most devices on the market currently last less than half that time. As battery life increases, so will the appeal of these applications.

Field of view: The human field of view can extend to approximately 180 degrees, the middle 114 of which is considered to be binocular in which humans use both eyes and can perceive depth and distance.25 Although many devices have fields of view just higher than 100 degrees, increasing the field toward 180 degrees will expand a worker’s observable environment and enable more immersive experiences.

Eye tracking: Many devices today already use gestures and voice commands, but advances in new eye tracking techniques, such as foveated rendering—which decreases system demands by tracking a user’s eye and rendering only what he looks at versus the entire field of view—may soon reduce power consumption and increase the interface’s responsiveness.26

New entrants and sensors: Some analysts predict that big names such as Apple Inc. and Samsung will enter the mobile AR market in the next one to two years.27 If true, they could enlist an army of developers to create new content and, then, introduce new sensors28 that could better track a user’s location, gauge proximity to other objects, and perceive depth.

Price point: Most AR/VR hardware is still expensive, with costs ranging from several hundred to several thousand dollars per user setup. With many new technologies, price influences consumer adoption, and a decrease may drive enterprise adoption as well. As prices fall, expect enterprise experimentation and deployment to increase.

Comfort/weight: Some devices, weighing over a pound and uncomfortably bulky, can be tiring for workers to wear for an extended period. As lighter and sleeker devices become available, adoption will grow.

Numerous opportunities in the enterprise

Companies that employ workers for maintenance, repairs, or inspections, particularly in remote locations, may want to explore integrating AR/VR technologies into their workflows. Providing workers with hands-free access to information and assistance from colleagues while they work promises to increase efficiency in sectors such as construction, manufacturing, logistics, and oil and gas.

Organizations that conduct high-risk or costly training in sectors such as aviation, medicine, and industrial products should also consider exploring AR/VR technologies. AR/VR training may lower the cost, reduce the risk, and increase the effectiveness of training to perform exacting physical tasks.

The time is also right for marketing leaders in consumer products, retail, and real estate to begin testing the technology for their businesses. As always, clear performance measures will tell the tale.

Many organizations have incorporated AR/VR into their design processes, but there is so far limited data about the impact of AR/VR in other types of analysis and data visualization. Despite this, sectors with numerous knowledge workers may want to experiment with AR/VR, but with tightly scoped use cases until the technology improves. The next few years will likely see advancements that can enable sophisticated data visualizations that will amplify current analytical techniques.

AR/VR is rapidly evolving from a curiosity, to a subject of experiments, to an enterprise tool that can offer broad benefits. Ongoing improvements in performance and cost will inevitably broaden the applications of this technology. The time is right for senior executives, including enterprise strategists, operations leaders, product owners, and marketing heads, to map out how they might put this technology to use. 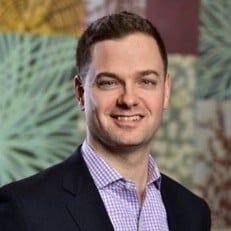 Ryan Kaiser is a senior manager in Deloitte LLP’s US Innovation group, where his efforts focus on digital transformation, strategy, and product/solution incubation. He frequently conducts concept exploration and evaluates emerging technologies and business trends to support strategic initiatives for Deloitte’s leaders and clients.

For more companies, new ways of seeing has been saved

For more companies, new ways of seeing has been removed