GirlCode started out of multiple frustrations – Zandile Mkwanazi would attend competitive hackathons and it would leave her wondering where the females were. Jeanette and Tinyiko saw the lack of female representatives in their everyday life working for big IT companies. In 2015 the three friends joined forces to create and build what we now know as GirlCode.

“When Zandile first came to me about her frustrations at the hackathons and how male-dominated the industry was, I realised that the inequality I saw on a daily basis in the IT departments went further than just where I was. We discussed how in these male dominated hackathons, females would be tasked with building presentations which would be considered the creative aspects instead of the actual code. We decided that things had to change. And if we believed that things had to change, we might as well be the ones making that change happen,” says Theu, today a Deloitte South Africa marketing professional working in the digital space.

What the three friends (today in their late 20s) wanted was to break moulds and empower historically disadvantaged young South African women and girls to believe that they could pursue a career in what was viewed a male occupation. They aimed at empowering the girls by giving them the necessary skills and confidence to pursue coding.

In 2019 they have succeeded in doing all of that – beyond their wildest dreams of five years ago.

GirlCode goes to primary and high schools, to educate and train young disadvantaged South Africans that coding is not only the future – it can be their future. “Most of the kids we’re talking about don’t have laptops at home and their schools have almost nothing to work with. So we go to the schools and empower young women through technology.”

One of the programmes run by GirlCode is called the GirlCoder Club, where GirlCode goes into the high schools on a Saturday and teaches young girls how to code. A branch of that was the Lego League programme where GirlCode identified two schools and took the teams to compete in a prestigious national robot-programming competition – after only one month of training them. To everyone’s excitement, one of the teams was awarded Judges Choice Award, which is an award given by the judges to a team they believed has great potential to win.

For 2020 GirlCode is looking to have the students training from as early as March and this time they have high hopes that the budding programmers will win the top prize. GirlCode has various programmes running at any one time. In March 2020 it is looking to launch its Digital Literacy Programme, which will aim at teaching unemployed township women the basicsmof the MS Office suite, especially Excel. This will enable the women to apply for job opportunities that they previously were not qualified for, such as being data capturers or secretaries. Theu says GirlCode is growing “exponentially”, and she’s not exaggerating. In FY 2018 GirlCode reached 780 young people, of whom 90% were female. (Not directly and indirectly but directly).

Generous corporate and individual sponsorship (including backing from Deloitte) allowed GirlCode to host their annual GirlCode Hackathon, which was the biggest female-only hackathon. The winners of the hackathon won a trip to the Wonder Women Tech conference in California that allowed the girls to engage with the global tech players.

Theu’s two co-founders have both joined the company full time.

So why does Theu go home almost every night after a hard day’s work at Deloitte to work on GirlCode? “I love helping people and my love for anything digital makes this an amazing opportunity to do my part for society,” she says. “And I’ve never known anything to motivate me as much as the appreciation we get from the girls. Seeing the joy on the faces of young women who’ve never used a laptop before, seeing them suddenly feeling empowered, it’s amazing.” The hard work by the team was recognised when Jeanette Theu was one of five finalists for the global Booking. com Technology Playmaker Awards in the category Role Model of the year 2019. 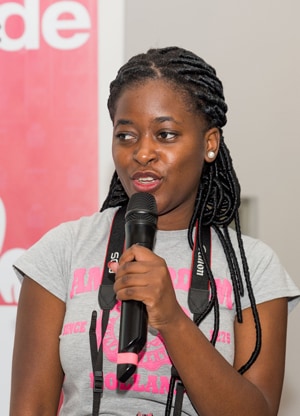