WorldClass has been saved

WorldClass has been removed

The art of hope

Stellenbosch is home to one of the country’s top universities and some of its most elite schools. Stellenbosch also has a thriving arts scene. But almost all of the art events happen in the town’s well-heeled Middedorp (literally “midtown”). Surrounding Middedorp are poor communities where the harsh realities of life mean that art, design and creative subjects are considered unaffordable luxuries.

Andi Norton of the Stellenbosch Outdoor Sculpture Trust has always believed in the ability of art to inspire and empower, to transform lives. And so, in 2012 with Deloitte’s Michael van Wyk, she founded KickstART, a non-profit organisation which exists to take the power of art and design to the less privileged – particularly their children.

Norton explains: “The schools surrounding the centre of Stellenbosch have very little access to art and creative subjects. When schools are struggling just to keep going, the first budget items that get cut are art, drama and public speaking. In the 21st century we need innovators and entrepreneurs. We need people with the big ideas, but without the ability to communicate, those big ideas will remain just that: big ideas.”

Norton adds that arts and creativity foster not just the ability to communicate but also the ability to think critically and to work collaboratively. And so KickstART was born, now providing an annual workshop for over 100 children from seven of the most vulnerable schools around Stellenbosch.

The workshops teach youngsters about the wonders of art, and about the possibilities of art and creative careers.

Then, working with Deloitte, those who show the greatest promise are selected for the KickstART programme, which allows them to attend art lessons at the prestigious PJ Olivier Art Centre. Twice a week, with Deloitte sponsorship, the learners are transported to and from PJ Olivier and given a meal because, as Norton says, “you can’t create or learn if you’re hungry”. Beneficiaries also receive mentoring and psychosocial support.

“We have had the most incredible group of alumni come through KickstART,” says Van Wyk (who heads up Deloitte’s Stellenbosch office). He cites one youngster who is about to finish her degree in jewellery design, others who have become teachers and three who are on full-time Bachelor of Arts bursaries at the Stellenbosch Academy of Design.

According to Van Wyk, as many as half of all children living in the Winelands drop out of school in Grade 10. KickstART does not necessarily aim to produce artists and designers. But it does aim to convince highschool learners that it is important to stay in school until matric. “Many of them believe that unless they do maths and science, they won’t get a job so what’s the point in staying on? 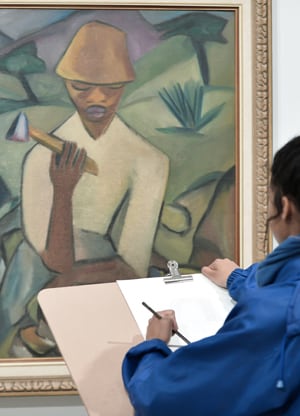 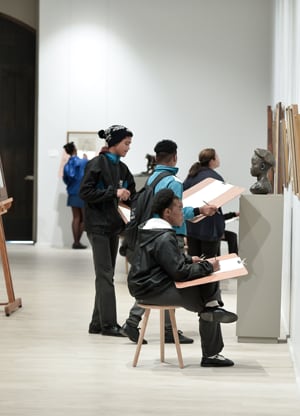