Growing in Turbulent Times has been saved

Growing in Turbulent Times has been removed

Death and taxes apart, the only other certainty in the world is change. Nothing has brought this into sharper focus than COVID-19. But change brings opportunity for those smart enough to grasp them

The 20th century experienced metronomically regular periods of relative calm, followed by calamities – two world wars, the great depression, the cold war, and even the Spanish flu. This 21st century appears to be following the same trajectory.

The financial crisis that started in 2007 saw the first contraction of the global economy since World War II and the largest decline of trade in 80 years1 . It resulted in the collapse of large financial institutions, the bailout of banks by national governments and sharp declines in stock markets around the world. It contributed to the failure of key businesses, significant declines in consumer wealth and economic activity, the effects of which we felt for at least ten years. Many causes for the financial crisis have been suggested, including the result of high risk, complex financial instruments, corporate governance failures, regulatory dysfunctionality and the market failing to rein in the excesses of Wall Street.

Unsurprisingly CEO faith in global growth forecasting was eroded and many business leaders retreated into their shells, conserving cash and becoming internally focused. As a direct result of the crisis, by June 2011 South African businesses listed on the JSE had accumulated in excess of R470 billion in cash2  deposits and investors began to call for improved returns from the cash piles. The period was characterised by credit tightening and a plunge in revenue. Unlike the 1930s, central banks around the world stepped in to keep credit flowing through measures such as “quantitative easing”.

The SARS-CoV-2 (COVID-19) pandemic has caused the largest global recession in history, with more than a third of the global population being placed in lockdown. Global stock markets experienced their worst crash since 1987, and in the first three months of 2020 the G20 economies fell 3.4% year-on-year3. Between April and June 2020, the International Labour Organization4  estimated that an equivalent of 400 million full-time jobs were lost across the world, and income earned by workers globally fell 10 percent in the first nine months of 2020, equivalent to a loss of over US$3.5 trillion.

The world that has been ushered in due to the pandemic has seen schools closed, businesses shuttered, staff working from home, social distancing becoming the norm, curfews, the wearing of face masks, and cities and provinces in lockdown.

Once again, companies locally and abroad, are typically looking to efficiency improvements and austerity measures to manage their way through the crisis. The focus once again is inward. However, in many cases, those sources of value have already been wrung dry.

Might there be another approach to these calamities that positions companies for future growth in a sustainable way?

Why is revenue growth important?

It is common cause that markets reward companies for sustainable growth but mercilessly punish those that don’t grow. Research indicates that well over 70% of Total Shareholder Returns5 are contributed by revenue growth.

A significant part of a company’s market capitalisation is driven by the market’s expectation on growth achieved through investments yet to be made.

Over the period of 1987-2005, Deloitte researched close on 5 000 companies in the USA to establish patterns for growth and critical success factors. What we found was that companies that attain critical mass (more than R3.5bn) have a greater chance of surviving than smaller companies. Of the companies that survived over this period, only 27% experienced high growth that is two times that of market CAGR. But significantly, only 6% achieved performance enhancing growth over a long run that is growth that also improves the bottom line and key performance metrics.

The research further showed that 87% of Fortune100 and Global 100 companies hit some type of growth stall. Of these, 54% experienced growth failures and posted slow to negative growth during the 10 years after the growth stall occurred. By far the majority of the reasons that led to the growth stall in the first place were within management’s control.

Start with a growth target

Every journey must start with a destination in mind – so too the growth journey. Establishing the right growth target is difficult and requires bold leadership. The target should not be a thumb suck, but it should also not just be an extrapolation of historical achievements. Rather, it should emerge from the interplay between internal and external factors and expectations. The target is critical to galvanising the organisation and creating the momentum and excitement needed to start the growth journey.

Install a Scalable and Repeatable Process

In a period of inward focus such as that brought on by COVID-19, getting back to growth requires a systematic process and organisational structure designed specifically to help companies sustain long-term growth. It is not a short-term, one-off solution, but rather a comprehensive approach to building “internal muscle” to deliver consistently against growth targets. This requires executive support and alignment in addition to a clear commitment to achieve the growth target.

A key success factor is to establish appropriate governance processes upfront. Experience has shown that getting the governance right is the single greatest contributing factor to success for any growth strategy.

While there is no doubt that many growth ideas can be sourced internally, organisations need to cast their nets wide in order to source new revenue growth opportunities. Insights from competitors and peers together with an understanding of market trends are important for growth opportunity sourcing. These opportunities could also be sourced from adjacent or emerging industries.

As illustrated in Figure 3 below, there are three sources of growth – core, adjacent, and new opportunities:

Protecting and extending the current business is the traditional focus of companies looking to sustain or extend advantage. However, core and adjacent opportunities are often not sufficient to achieve results ahead of market expectations – ‘new’ opportunities are required to beat and sustain growth over the long term.

Use the Growth Levers that are at an Executive’s Disposal

While this framework is a useful way to think about some aspects of growth, it fails to account for uncertainty and creating growth in current and future businesses. A sophisticated growth strategy should depart from the orthodoxy of core, adjacent and new as depicted above.

A comprehensive approach to growth looks at growth options along a continuum. In building the business of today, companies will typically turn to key areas of focus such as customer retention, pricing optimisation and improvements to existing offerings.

Moving along the scale towards choices that carry higher uncertainty and lie farther from existing operations, companies will likely start the business of tomorrow by designing new offerings, intruding into new markets and geographies and creating entirely new business lines for entirely new customer sets. 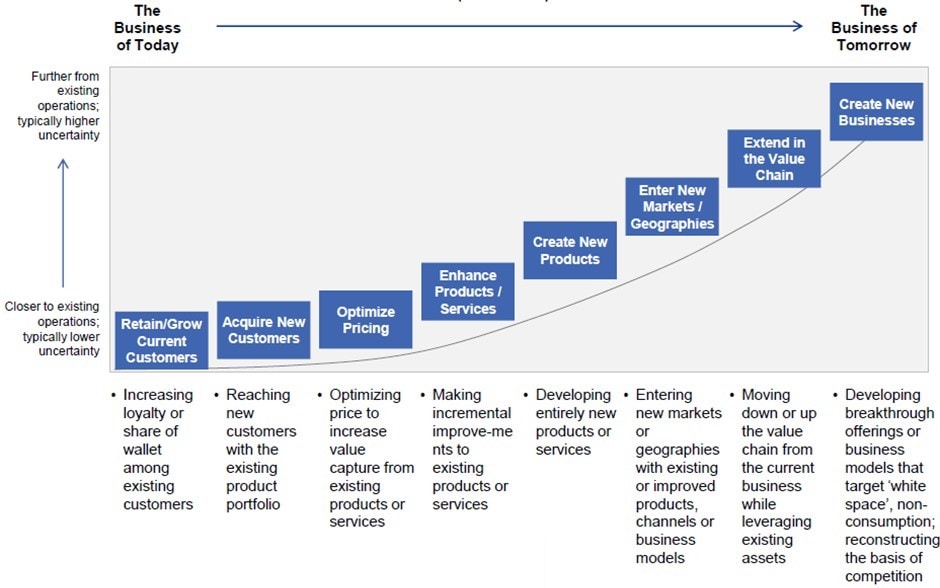 It is useful to understand the range of levers to pull but crafting the full growth strategy rests in knowing how to apply those choices to specific markets and offerings. As pictured in Figure 5 below, each axis measures a degree of “newness” – newness of customers and markets along one side, and newness of products and business models along the other.

Where existing offerings meet existing customers at the lower left, companies are engaging in core growth with relatively little uncertainty. Where entirely new offerings meet non-consumers at the upper right, growth is more uncertain. In between lies the realm of adjacent offerings and markets that aren’t new to the world but are new to a particular company.

Combining these two axes yields seven distinct boxes, each of which is a potential growth strategy. Where growth strategy may once have been a dartboard, this model turns it into a marksman’s target. A company can now match its capabilities, opportunities and risk tolerance with specific levers – then allocate effort among those to balance business of today and business of tomorrow growth, manage risk and exceed shareholder expectations.

Noting executives’ heightened risk awareness brought on by COVID-19 pandemic, risk management and mitigation are critical considerations. In Deloitte’s experience, companies need to adopt a portfolio approach to growth. This means that they must both enhance and protect their existing business while also creating options for emerging businesses to sustain growth over time.

Because sources of growth yield different levels of uncertainty and risk, companies should construct a growth portfolio that aligns with their own risk tolerance. This requires both commitments and strategic bets (options) that can be exercised as future scenarios unfold.

Managing a growth portfolio that spans both the business of today and the business of tomorrow requires thoughtful governance and a clear understanding of key stakeholder requirements and expectations. In our experience, treating its new growth plans, especially those in the business of tomorrow area, as separate from the rest of the business, allows companies to give the fledgling opportunity protection from “corporate anti bodies”, those forces opposed to change. In some cases, a “firewall” approach can benefit existing core businesses (by insulating it from new risks) and the growth-oriented operations (by freeing them from the legacy structures that may not fit their mandates).

Now go do it

To take a growth plan from theory to execution, an organisation needs to ensure that the following building blocks are in place.

Finally, be in the game of killing bad ideas quickly – time really does equal money.

Mike is a Director in Deloitte Africa and a senior Partner in Monitor Deloitte. He has held numerous leadership positions in Deloitte including leading the Management Consulting, Finance Advisory and ... More