Is carbon sequestration a viable option for reducing carbon tax? has been saved

Is carbon sequestration a viable option for reducing carbon tax? has been removed

Is carbon sequestration a viable option for reducing carbon tax?

Carbon sequestration as a business case

What is carbon sequestration?

Carbon sequestration is an ecosystem service whereby vegetation absorbs carbon dioxide and stores it as carbon. Within the lifespan of a tree, carbon dioxide is absorbed through the process of photosynthesis resulting in carbon being stored as biomass and soil organic matter. However, carbon dioxide is also partially released back into the atmosphere through organic matter decomposition and respiration. The following diagram provides a simple illustration of the carbon cycle in trees: 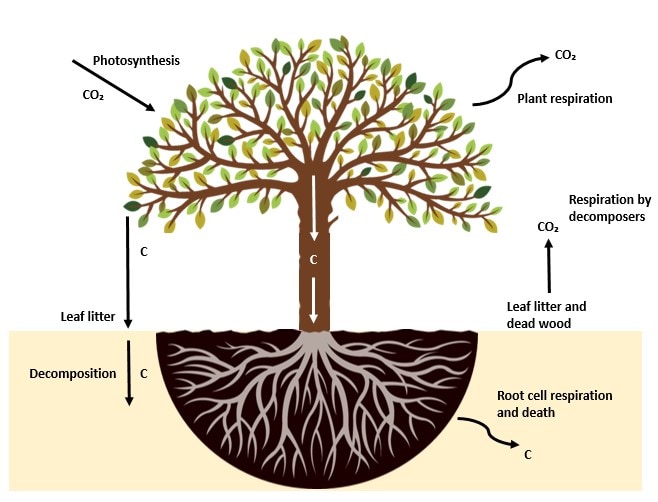 It is important to note that carbon dioxide stored as biomass needs to be permanent in order to ensure a true reduction in atmospheric carbon dioxide levels. Decaying trees, burning of biomass and short-lived wood products can release this carbon dioxide back into the atmosphere, reversing the effects of carbon sequestration.

The role of carbon sequestration in carbon tax

In a South African context, carbon sequestration can be utilised to help reduce taxpayers’ carbon tax liability. The Carbon Tax Act (no. 15 of 2019), implemented on 1 June 2019, was developed to ensure companies reduce their greenhouse gas (GHG) emissions as part of the global effort to tackle the effects of climate change. The Carbon Tax Act allows taxpayers to reduce their GHG emissions, and subsequent carbon tax liability, through a variety of tools such as allowances and verified carbon sequestration.

Numerous academic studies have shown the benefits of using trees to sequester carbon dioxide1. An academic study analysing the carbon storage potential of Johannesburg, in conjunction with similar studies, shows that there is an unequal distribution of trees across Johannesburg, with some areas having very few trees and subsequently low carbon storage2. On average around 1 800 trees are found in high tree density urban area sample sites (1km² quadrants) across Johannesburg, which equates to around 1 500 tonnes of CO₂ (tCO₂) per square kilometre. Areas with low tree density had an average of 900 trees in sampled sites which equates to around 50 tCO₂ per square kilometre.

Carbon sequestration as a business case

Although carbon sequestration has the potential to yield good carbon tax savings, at the existing carbon tax price, costs far outweigh the potential carbon tax savings obtained from carbon sequestration. Research suggests that it costs around R1 200 to plant one tree - which includes the cost of the tree itself as well as the planting and maintenance costs3. To realise the maximum carbon tax savings mentioned earlier, around 1 800 trees per square kilometre will need to be planted across the low tree density suburbs. This is a total cost of around R450 million and R27 million for suburb A and B respectively.

It is important to note that currently the global price of carbon varies significantly from less than $1 to a maximum of $127 per tCO₂e, or between R15.33 and R1 950 per tCO₂e4. The Intergovernmental Panel on Climate Change (IPCC) estimates that the explicit global carbon price should be at least $50 to $100 per tCO₂e (  ̴  R770 to R1 534) by 2030 to avoid a 1.5° C rise in global temperature. It is expected that carbon sequestration will only become a sound business opportunity for reducing carbon tax liability in South Africa at significantly higher carbon tax prices.

In South Africa, the carbon sequestration regulations are still to be gazetted and will have to be carefully scrutinised to determine their impact on the business case for sequestration as a viable and cost effective option for reducing a taxpayers’ carbon tax liability. Notwithstanding this, it is important to bear in mind that trees provide other benefits other than carbon sequestration. These include temperature regulation, air purification, rainwater management, soil formation, nutrient cycling, habitat formation, as well as recreation and aesthetic improvement. These ecosystem services should be included in any cost-benefit analysis done on potential carbon sequestration projects to determine the true value of trees.

Lastly, even though the financial returns of carbon sequestration might not make sense currently, investments in climate change will yield long-term returns. Given the forecast increases in the carbon price, sequestration requires a long-term investment horizon and action should be taken now.

This article was prepared by the Global Investment and Innovation Incentives (GI³) business unit within Deloitte Africa Tax & Legal. GI³ offers a range of services within the incentive, energy, carbon tax and sustainability space. Please feel free to reach out to the team if you or a client are interested in these service offerings.