Deloitte commentary on South Africa Budget 2020/21 has been saved

Deloitte commentary on South Africa Budget 2020/21 has been removed

Finance Minister Tito Mboweni’s 2020 Budget Speech was delivered against the backdrop of President Cyril Ramaphosa’s State of the Nation Address in which the President made the following sobering comments:

“Our country is facing a stark reality. Our economy has not grown at any meaningful rate for over a decade. Even as jobs are being created, the rate of unemployment is deepening. The recovery of our economy has stalled as persistent energy shortages have disrupted businesses and people’s lives. Several state-owned enterprises (SOEs) are in distress, and our public finances are under severe pressure.”

Against the backdrop of this deteriorating economic outlook, the Minister of Finance has reiterated in this budget that South Africa must strive for fiscal sustainability, measured as stabilisation of the debt-to-GDP ratio, by moderating spending as a share of GDP and reducing the wage bill as a share of overall spending. The budget indicates that there is a realisation that there are some difficult, painful choices and trade-offs which will be needed. This will not be easy, it will be a tricky road to navigate with affected stakeholders.

It is perhaps as a result of this current state of play, that many commentators anticipated wide-ranging tax increases. However, as pointed out in National Treasury’s Budget Review 2020, despite large tax increases over the past five years, the difference between projected and collected revenue has continued to widen. This is attributed to slow economic growth and a weakened South African Revenue Service (SARS). As a result, it is believed that further substantial tax increases are unlikely to be effective as it is conceded that South Africa already has a relatively high tax-to-GDP ratio compared to similarly developed countries. 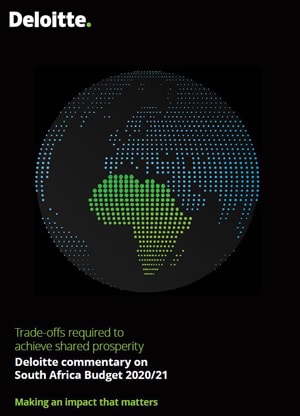