Following the success of the inaugural inHR award last year, the three innovative and forward-thinking Swiss HR projects that have won the 2019 award have now been announced. The inHR award, which is presented in three categories and recognises individuals and teams who perform pioneering work in HR, went this year to VBZ, Roche, and SwissRe.

On the initiative of Deloitte Switzerland, SAP Switzerland, NZZ, and the University of St. Gallen, a jury of experts have once again honoured innovative Swiss HR projects and initiatives this year. The aim of the inHR award is to discover and turn the spotlight on individuals and teams who carry out pioneering work in new and creative HR projects, and to encourage exchange and interaction between HR specialists. The announcement of the award competition earlier this year drew a lively response yet again, with numerous entries submitted. The Swiss HR community met yesterday at the second annual inHR award ceremony to discover which three projects the expert jury had selected as winners. 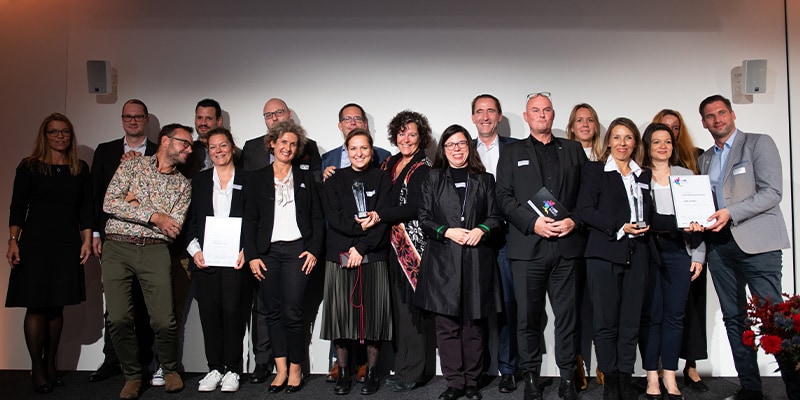 In the Talent Diversity & Inclusion category, the 2019 inHR award went to Swiss public transport operator VBZ for its ‘Job Box’ project. VBZ, which operates in the city of Zurich, turned the conventional method of getting information to job-seekers on its head. Instead of waiting to be asked by job-seekers about tram-driving careers, VBZ proactively ‘took the career’ to potential candidates – in a way that was as unusual as it was innovative. The company opened the ‘VBZ Job Box’ pop-up store on a busy square in Zurich. Here, experienced tram drivers spoke to anyone who was interested in applying to be a tram driver about their own, day-to-day experiences of the job. Potential applicants were also given the chance to sit directly behind the driver’s cockpit and talk to professional drivers on a journey in the VBZ’s career info tram. And they could even take the special ‘applicant’s chair’ for a real job interview – where else but on a tram? The jury praised the VBZ’s approach as an “authentic and innovative solution for tapping into talent pools that are otherwise hard to reach”. The focus, it noted, had not only been on recruiting potential candidates, but also on attracting interest in tram-driving as a career.

In the New Work category, Roche received the inHR award 2019 for a project aimed at giving a large organisation with 100,000 employees in around 150 countries a new way of thinking and a more agile way of working. The pharmaceutical company used an agile approach that makes people curious about change, including changes in themselves. The large-scale cultural change was accompanied by a change in leadership style and the consideration of new organisational models. The transformation to an agile way of working has led to a significant simplification of processes, greater employee commitment, better business results and ultimately better performance for patients. In the jury’s assessment, Roche succeeded in introducing agile working methods in business-relevant areas, thereby increasing the efficiency and effectiveness of the collaboration between the various teams. The key success factor is participation throughout the global organisation.

In the HR (R)Evolution category, Swiss Re was at the top of the podium at the inHR awards 2019. The reinsurer deserved the award for converting its HR process model to Scrum. The project team designed and pushed the entire planning, the definition of roles and responsibilities, the development of the training plan and the implementation itself with a bottom-up approach and little involvement of the management. The Scrum process model was introduced throughout the HR value chain with the aim of increasing efficiency and creating added value for the company. The first results speak for themselves: productivity was increased by 64 per cent and time to market was accelerated by a factor of three. The jury praised the use of Scrum in HR digitisation as an “illustrative application of agile methods”. The close cooperation between business, HR strategists and HR IT experts has resulted in a clear added value for both HR and end users. As new functionalities become available faster, they can react quickly to new requirements.

The inHR awards are presented in three categories:

Matthias is a Partner in Deloitte’s Human Capital Consulting Practice, based in Zurich. Matthias has more than 17 years of international business consulting experience. He collaborates with complex, g... More