Remain true to the original aspiration amid unprecedented changes, committed to driving talent transformation in an era of information revolution

The 2017 Deloitte Tax Championship, themed "Leading innovation and making an impact that matters", concluded successfully in Wuhan. Qualified from the National Tax Knowledge Contest that has functioned as the Phase I of the 2017 Championship, 13 teams from Mainland China, Hong Kong, Macau and Taiwan participated in the Final. After rounds of fierce competition, Shanghai University of Finance & Economics won the Championship, with Huazhong University of Science & Technology and Zhongnan University of Economics & Law as first and second runners-up respectively.

The 19th CPC National Congress has concluded earlier with worldly attention. Great emphasis has been placed on leveraging the internet and informatization in President Xi Jinping's report, urging all to "adeptly apply information technology and the internet in our work". With a commitment to supporting the State Administration of Taxation's imperative to further elevate the general public's understanding, awareness, and deliberation on taxation, this year’s Deloitte Tax Championship has innovated its competition rules. Phase I of the Championship was conducted online across the Greater China region in collaboration with the 2017 National Tax Knowledge Contest organized by the China Certified Tax Agents Association (CCTAA) and the China Certified Tax Agents Tongxin Service League. This endeavour aimed to leverage internet and information technology to ignite public interest in tax knowledge study, and to encourage university students to further explore the tax subjects through competitive learning. Mr. Li Linjun, Vice President and the Secretary-general of CCTAA, spoke highly of the seamless collaboration between the National Tax Knowledge Contest and the Deloitte Tax Championship, and expressed his expectations on the future development of the tax industry. He said: "This year's Championship is innovative in collaborating with the Tax Knowledge Contest and the in-campus promotion of tax, significantly contributing to making a greater impact and encouraging wider participation. I would like to extend my thanks to Deloitte China for its continuous efforts in talent development! It's imperative for the tax industry to innovate itself to serve new goals, explore the new and unchartered territories, and cultivate new talent that can adapt to the demands of the evolving economic landscape as well as the rise of Internet+ and AI. I look forward to more and more young talents committing themselves to the tax profession!"

In President Xi Jinping's report delivered to the 19th CPC National Congress, he also put forward the expectation and vision to "promote further integration of the internet, big data, and artificial intelligence with the real economy". Ms. Vivian Jiang, Deputy CEO of Deloitte China and Managing Partner of Tax and Business Advisory Services for the Greater China Region, also shared her insights with teachers, students, and industry peers at the Championship on how professional services providers are transforming themselves and leading the innovation against the revolutionary tide of artificial intelligence (AI). Vivian referred to the newly launched Deloitte financial robot as an example to illustrate how disruptive technologies including AI and robotic automation would replace humans to complete repetitive menial tasks with work efficiency greatly improved. The application has been proven successful in the realm of finance, and is expected to expand and penetrate into a broader range of areas. Vivian said, "Both in China and around the globe, the unprecedented changes are emerging in an accelerating pace. The convergence of industries, the evolving business models, and the disruptive digital and information technologies, have all in all challenged our existing service positioning and talent development model, and will undoubtedly bring ground-sweeping changes to the future of professional services. Therefore, what we do today to nurture tomorrow's talents becomes the high level proposition of the professional service industry to enhance its foundation. It has been 14 years since Deloitte has launched the Championship. While remaining committed to our original aspiration of talent development, we have been keeping up with the times by transforming and innovating the competition rules, information release and engagement channels, case design, and internship programs up to another level. In this digital era, we spare no efforts to drive talent of tomorrow with 3i attributes - 'insightful', 'integrated' and 'innovative' - to make an impact that matters!"

The cases at the Championship's final competition placed a premium on the students' multi-disciplinary knowledge, understanding of cutting-edge technologies, and capabilities to apply what's learnt in practical problem-solving. A series of recent hot topics pertaining to international tax and business, such as tax risks and treatment under domestic/overseas e-commerce models, IP management, R&D, and modern logistics were woven into the final cases. In addition, a specially designed bonus case at the final competition required each team to integrate the information technologies with tax knowledge to develop solutions so as to achieve an optimized business process. This case which was built around the simulated application of advanced AI technology in practice allowed the contestants to gauge the impact and challenges of the current AI revolution in tax and business, and try their hands on integrating insights into tax management and devising innovative solutions. This exactly echoes and showcases Deloitte’s "3i" talent standard against the evolving backdrop in the digital age. Furthermore, this year’s competition actively embraces the development of internet and new technologies in its information release and engagement channels, leveraging multiple social media platforms such as WeChat, live stream, etc. to broadcast tax knowledge and the real life at work of tax advisors. The active and frequent engagement with the target audience further helped promote tax awareness and exerted influence among the public.

Deloitte has always valued the practical abilities of talents, and emphasized knowledge application in practice. The practice can then in turn encourage further learning and knowledge acquisition, and ultimately forming a virtuous cycle. "The Championship has opened its doors to more talents this year." said Ms. Julie Zhang, Chairlady of Deloitte Tax Championship and Partner of Deloitte China National Tax Technical Center and Tax Policy Research Center. "For those who performed exceptionally in Phase I contest, we selectively provide internship opportunities or campus recruitment preferential policies depending on their grades. Through internship programs and campus recruitment, students will have the opportunity to immerse themselves in a real business environment and continue to practice the tax knowledge and soft skills they have been acquiring via the Championship. We hope students could try their learned hands via the Championship in a real-life business environment, identify and elaborate on their strengths, accomplish a smooth transition into their career roles, and grow into the talents of tomorrow who are capable of making an impact that matters for the whole industry and society."

Launched in 2004, the Deloitte Tax Championship is a pivotal initiative of the Deloitte Research Foundation, which promotes education, research and innovation in the field of taxation by supporting an array of national and local programs in the Greater China region. 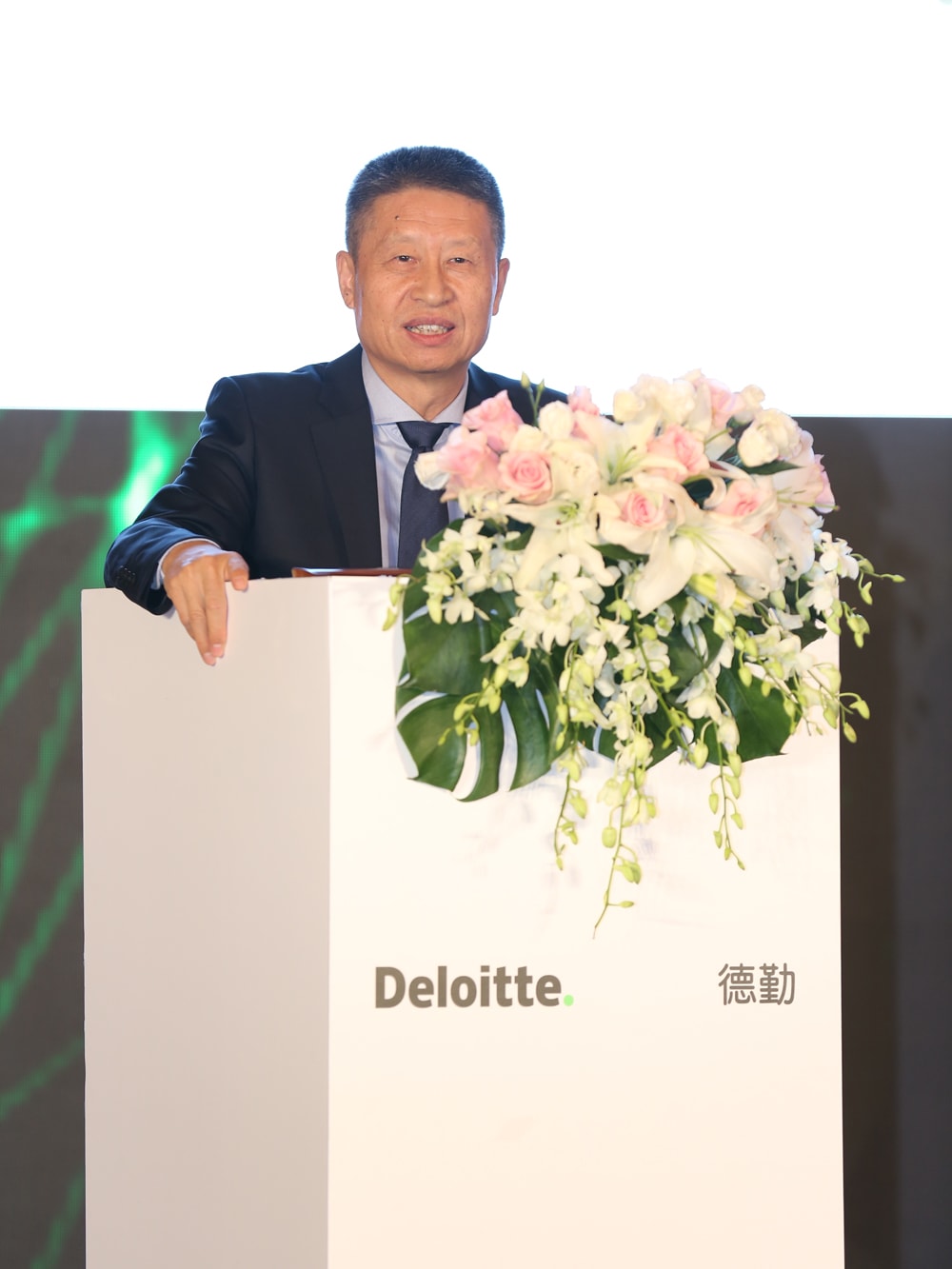 Keynote speech from Mr. Li Linjun - Vice President and the Secretary-general of CCTAA 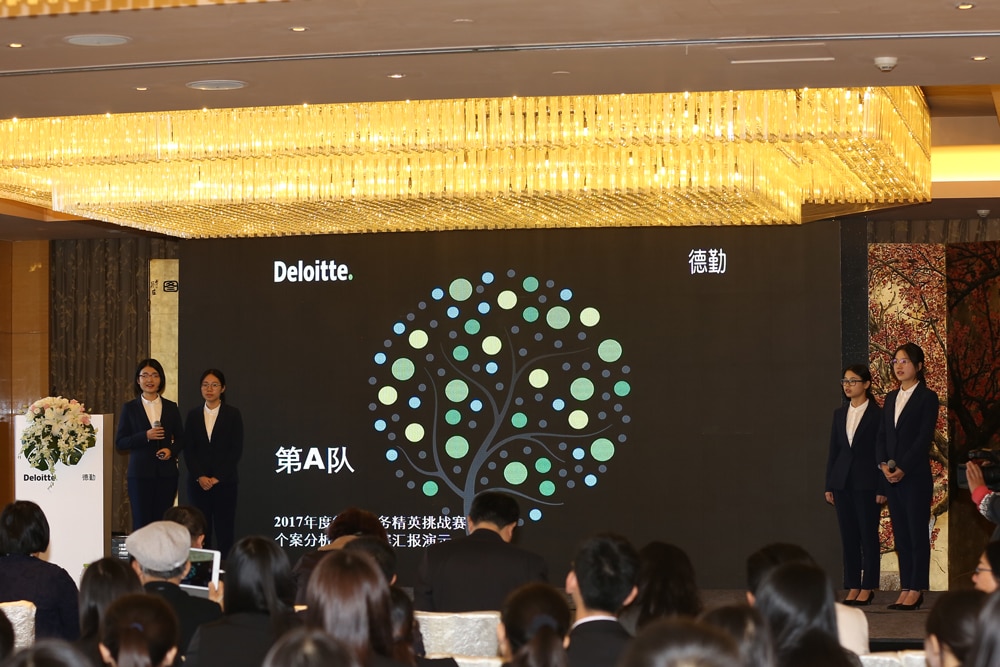 Case presentation during the added competition for top 3 finalist teams 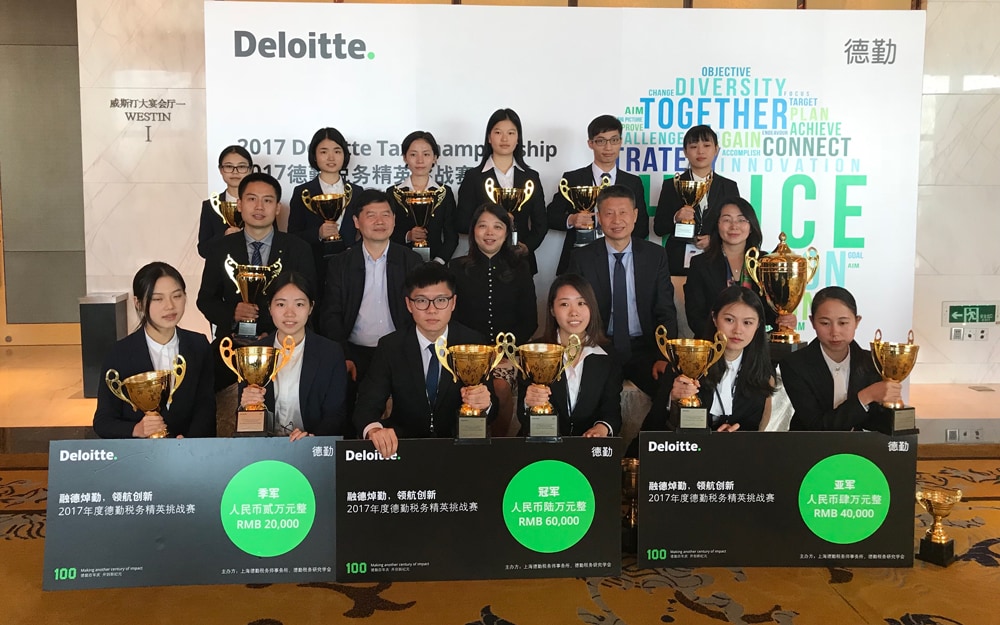 Deloitte: Chinese retailers still have a long way to go in terms of digital maturity