Consumers in emerging markets continue to drive luxury market growth. In China, Russia and the United Arab Emirates, markets that we have categorized as emerging luxury markets, the percentage of consumers claiming to have increased their spending in the last 5 years was 70 percent, compared to 53 percent in the more mature markets (EU, US and Japan), according to the fourth annual Global Powers of Luxury Goods report issued by Deloitte Global.

The report examines and lists the 100 largest luxury goods companies globally, based on publicly available data for consolidated sales of luxury goods in FY2015 (which we define as financial years ending within the 12 months to 30 June 2016). It also discusses the key trends shaping the luxury market and provides a global economic outlook.

“Travel and tourism is still the great growth opportunity for the luxury sector,” said Patrizia Arienti, EMEA Region Fashion & Luxury Leader, Deloitte Global. “Almost half of luxury purchases are made by consumers who are travelling, either in a foreign market (31 percent) or while at the airport (16 percent). This rises to 60 percent among consumers from emerging markets, who typically do not have access to the same range of products and brands that can be found in more mature markets.”

Based on publicly available data, the world’s 100 largest luxury goods companies generated sales of US$212 billion in FY2015, 4.5 percent down year-on-year. The average luxury goods annual sales for a Top 100 company is now US$2.1 billion.

“The essence of luxury is changing from an emphasis on the physical to a focus on the experiential and how luxury makes you feel”, said Vicky Eng, Retail Sector Leader, Deloitte Global. “However premium quality remains a ‘must have’ and consumers retain a keen eye for craftsmanship and hand-made products”.

“Both mainland China and Hong Kong continue to experience a slowdown in luxury goods spending, with economic uncertainty dampening consumer confidence,” said Tianbing Zhang, Leader of Deloitte China Consumer Products and Retail Sector. “In mainland China, the slowing economy has resulted in lower spending. Nevertheless demand remains steady among the country's expanding middle class, with their increasing disposable incomes, as they continue to buy better quality products and showcase their social status. In addition, as in other emerging markets, prices of luxury goods in China are being adjusted downwards to bring them in line with global markets. This is encouraging more Chinese consumers to purchase luxury brands in their domestic market.”

Key findings from the report include: 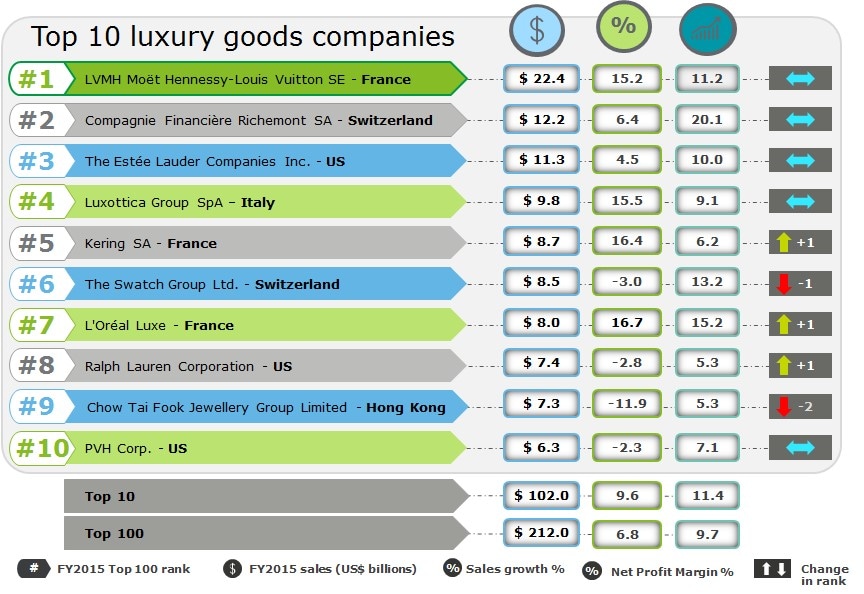 About the Global Powers of Luxury Goods report

The Global Powers of Luxury Goods report identifies the world’s top 100 largest luxury goods companies based on publicly available data and analyzes them from multiple perspectives. It also examines industry trends and global economic conditions. For the “New luxury consumer” section of the report, Deloitte surveyed over 1,300 consumers in 11 countries (China, France, Germany, Italy, Japan, Russia, Spain, Switzerland, UAE, UK and US) to explore their attitudes to luxury goods and their purchase behavior.

The art and science of customers