The CNBC broadcasted a live program, 'Street Signs' on "China is 'quite wise' to scrutinize overseas purchases" on 7 September 2017, in which our National M&A Leader Patrick Yip was interviewed.

Despite a decline in deal volume and size, China's national outbound policy remains intact, except that outbound M&A is now more regulated and disciplined to avoid wastage e.g. overpriced companies, speculative or passive investments not related to buyer's industry expertise. Patrick pointed out that it is "quite wise" for the Chinese government to introduce more discipline into outbound M&A and put China's trade surplus/foreign reserves to more productive use by investing in strategic assets in strategically important locations, e.g., the countries along the Belt and Road.

With the recent BRICS meeting, it is clear that China is committed to being more active and involved in the international community and outbound M&A is part and parcel of this commitment. 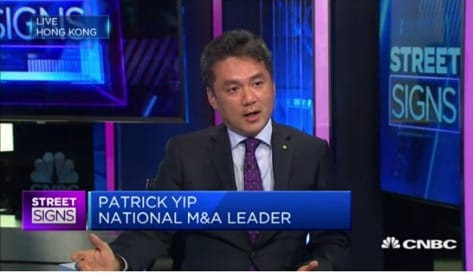