Insights from the GitHub platform

A new study of the global open-source platform, GitHub, offers key lessons on blockchain development—how projects have grown, what's likely to come next, and the implications for financial services firms.

Figuring out how foundational technologies, such as the Internet or mobile, morph and grow is not easy. New technologies often attract a wide variety of developers, including many freelancers from around the world. The sheer number of developers, the types of problems they are trying to solve, and the geographic spread can make it difficult to anticipate where any new technology is headed.

But perhaps the fundamental difference with blockchain development is that it has largely been orchestrated in the open-source environment. Bitcoin, the original blockchain system, was birthed in open source.

Accordingly, in an effort to better understand the development of blockchain and its ecosystem, we have conducted an extensive data analysis of blockchain projects in an open-source environment. Our study appears to be the first empirical attempt to understand the evolution of blockchain using metadata available on GitHub, a global software collaboration platform.

We chose GitHub because it is the largest known software collaboration platform in the world, with more than 68 million projects and 24 million participants. GitHub also appears to host the most important projects for the blockchain community. The activity on GitHub provides a unique opportunity to identify who is behind blockchain’s development, what type of programming is powering it, where the talent resides, how networks and communities of projects and developers are organized, and what risk factors exist for investing resources into repositories.

Financial services firms seem to be leading the way in blockchain applicability; they currently have the most commercial use cases of blockchain in the marketplace. Our findings could help firms improve their ability to identify successful projects and opportunities based on how the blockchain ecosystem is evolving.

Unless otherwise cited, all data and statistics that we report on blockchain activity on GitHub in this paper is a result of our analysis of the GH Torrent project and the GitHub API.

Blockchain thrives in an open world

While sharing software code in a public forum can be traced to the 1950s, opensource platforms have only become hubs for software development within the last 30 years. 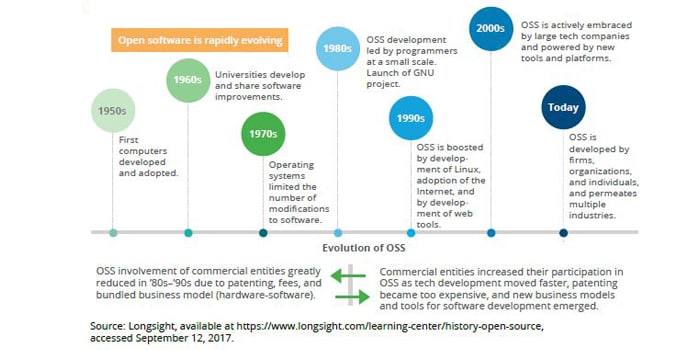 The Internet was a great enabler for scaling: Earlier, open-source activity had been mainly the realm of academia, but the Internet made it accessible to aficionados and experts of all stripes, amateur and professional, individual and commercial. That said, there was a dip in relevance of software development on open source for a period when commercial entities that secured licenses and patents placed high fences around software code. However, disruptive innovation has fostered an ever-increasing sharing economy, which has shifted important software development back to opensource platforms.

Open source could be the ideal petri dish for attracting a critical mass of blockchain coding efforts, talent, and overlapping objectives that accelerate an ecosystem with common standards. It may also mitigate the cost that firms would pay to dedicate resources to a still largely experimental technology. Developing proofs of concept in an “intranet” blockchain learning platform does not seem as efficient as learning how to develop business solutions on an “Internet” blockchain. At the current evolutionary stage of blockchain technology, it is likely to be in a developer’s best interest to develop, or watch the development of, blockchain solutions on open source. Blockchain appears to have a better chance to more quickly achieve rigorous protocols and standardization through open-source collaboration, which could make developing permissioned blockchains easier and better.

Our primary unit of analysis on GitHub is the repository. A repository contains the relevant code and files behind projects, where the actual protocol and implementation of programs reside. Throughout this report we use the term “repository” and “project” interchangeably. We will also be looking at the two types of project authors: users individuals with no known affiliation to an institution; and organizations—accounts associated with financial services firms, start-ups, research centers, or software foundations.

In the study, we look at repositories— their authors, their chances of survival, and how they fit into communities and networks of communities; which programming languages are prevalent and why; and where talent resides (See our interactive dashboard, where you can explore the GitHub ecosystem’s repositories, coding, and geographies in detail.)

Which control principles are essential for blockchain adoption on a global scale?